The slither of northern Portugal where the Douro River winds like a coiling snake from the Spanish border through dizzyingly steep hills to the city of Porto has been the home of port wines since the 1750s.

This remote hinterland has Unesco World Heritage status as the world’s first demarcated wine region, where rustic quintas, or wineries, cling to vine terraces draped across slopes so gravity-defying that they are still tended by hand.

My first taste comes after our riverboat, the fittingly named Douro Splendour, departs Porto under a ghostly shroud of early-morning mist.

Sara Macefield boards Riviera Travel’s Douro Splendour riverboat for a cruise along the Douro River. Where the river weaves through northern Portugal (above), ‘rustic quintas, or wineries, cling to vine terraces draped across slopes so gravity-defying that they are still tended by hand’ 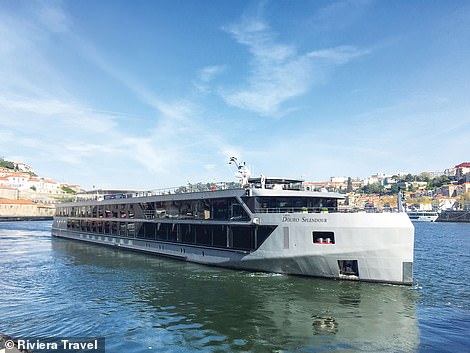 Most of the 105 guests aboard Douro Splendour (above) are retired Britons, Sara reveals

As the city limits fade away, I fall into the soporific pace of life along the so-called River of Gold, where wooden rabelo boats piled high with wine barrels used to sail to the port houses of Vila Nova de Gaia opposite Porto.

In those times, the Douro’s perilous waterfalls and fast-flowing rapids frequently upended boats and their precious cargos, most famously claiming the life of Englishman Joseph James Forrester, whose rabelo crashed on to rocks.

It is thought the wine merchant’s money-belt, heavy with gold sovereigns, dragged him down to the riverbed, though his body was never found. However, the women accompanying him floated to safety after their skirts filled with air.

The construction of a road and railway line meant such hair-raising trips were no longer necessary, with the last commercial rabelos sailing in the early 1960s, though eye-catching replicas now take tourists on sightseeing trips from Gaia.

The Douro’s raging waters have since been tamed by a network of dams providing hydro-electric power and locks that are the highest in Europe, making them attractions in their own right.

Sailing into the tallest Carrapatelo Lock, where waters rise and fall by more than 110ft, makes me feel as though we’ve been entombed as the gates slam shut with an eerie finality, condemning us to partial darkness before rising waters propel our boat back into daylight. 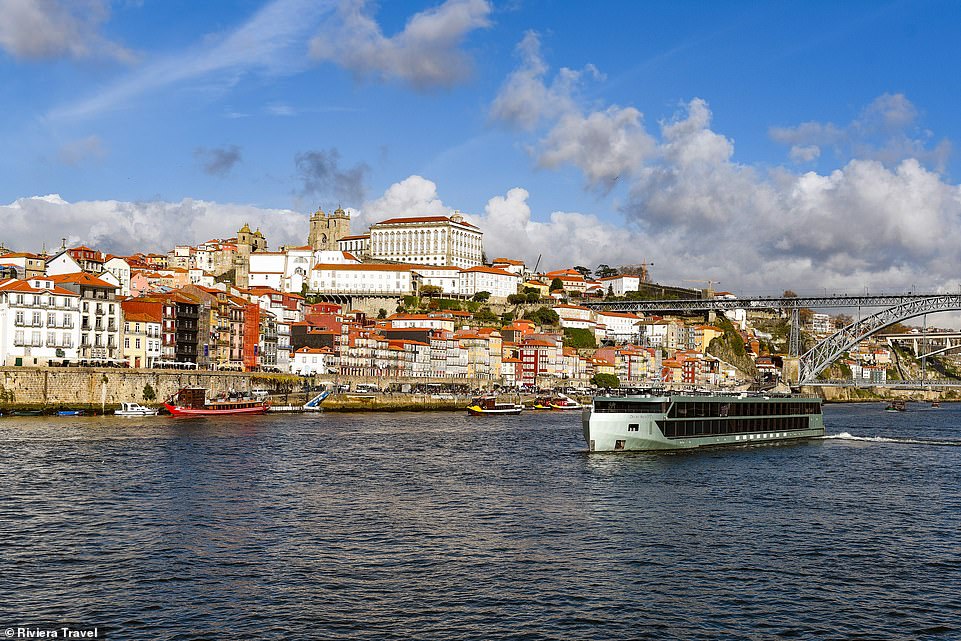 The Douro Splendour sails past Porto, where Sara’s cruise begins. She says that the vessel departs the city ‘under a ghostly shroud of early-morning mist’

As we continue upstream, I’m struck by how peaceful the Douro is — a relative backwater compared with the Rhine and Danube rivers and much shorter, as it becomes unnavigable at the border with Spain.

Sailing along this 130-mile stretch only takes a couple of days, before we retrace our route, but life onboard falls into a comfortable routine with talks by our attentive cruise director, Mario, and evenings enlivened with a foot-tapping local band and dinner at a riverside quinta where we learn of Portugal’s growing reputation as a wine producer, not just port.

Most of the 105 guests are retired Britons, and communal dining makes it very easy to strike up conversation over hearty cuisine, that includes local specialities, though a wider choice of dishes and a few more vegetables wouldn’t go amiss.

One of my greatest pleasures is sneaking my buffet lunch and glass of local rosé or Espumante sparkling wine to dine outdoors on the top deck in the unseasonably warm October sunshine while admiring spectacular views of rocky gorges and rolling hills.

We stop at the riverside town of Regua to explore the gardens of grand baronial pile Mateus Palace, famously depicted on bottles of Mateus Rose, even though the wine is not made here. 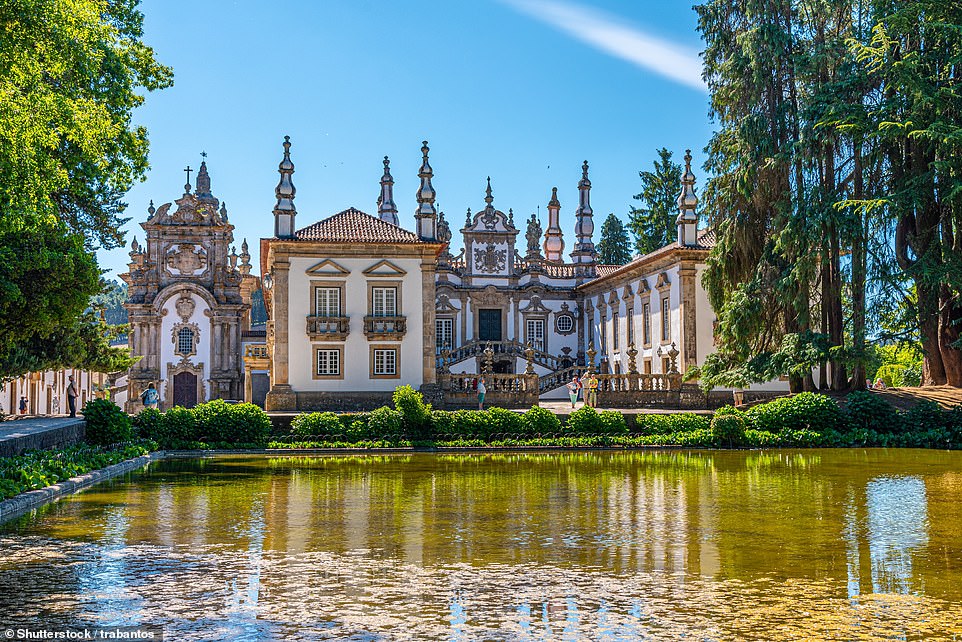 Sara explores the gardens of Mateus Palace, pictured, in Regua. Even though the wine isn’t produced on the site, the baronial residence is depicted on bottles of Mateus Rose, she reveals

Another tour takes us to Lamego, dating from the 7th century, with its sprinkling of churches, baroque architecture and, most famously, its Stairway to Heaven — a grand stone staircase of nearly 500 steps leading up the hillside to a shrine dedicated to the Virgin Mary.

Tours are essential as there’s little to see by walking ashore, and on this cruise they are included, but the biggest draws are the cities which bookend the sailing.

At the border, we take coaches into Spain for the 100-minute drive to the ‘Golden City’ of Salamanca for a day spent admiring the beautiful sandstone buildings of its historic centre with two cathedrals and university founded in the 13th century.

In the city of Lamego, Sara’s tour climbs up a grand stone staircase of nearly 500 steps to reach a shrine to Virgin Mary (above) 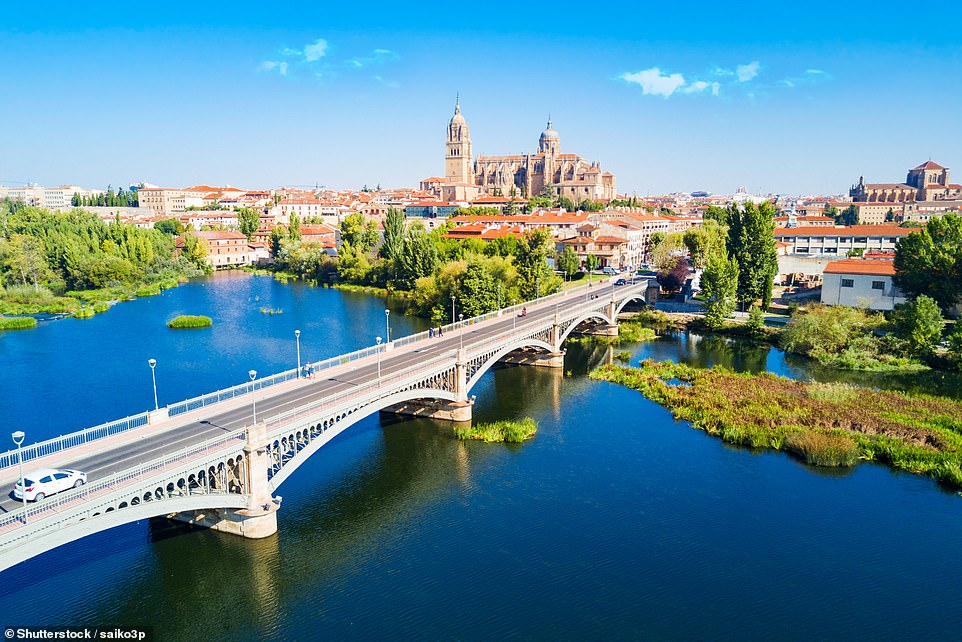 Sara spends a day in the ‘Golden City’ of Salamanca, above, where she admires the beautiful sandstone buildings of its historic centre

But it’s Porto where we start and finish this cruise that is the star turn. Its riverfront, or ribeira, is lined with colourful old merchants’ houses, reminders of a rich trading past that provided the wealth evident in the opulent treasures of the city’s churches.

I spend hours exploring the cobbled streets and walkways which, with the hilly terrain, becomes a workout, especially after climbing nearly 300ft to the top of the Dom Luis I Bridge across the Douro.

I’m rewarded by incredible views of the city skyline that make me forget my throbbing legs, but not my raging thirst.

After all, this gives me the perfect excuse to sample more Portuguese vino.