EXPRESS INFORMER > News & Politics > ‘This cruise will change you forever’: Traveller is wowed by an expedition cruise to the Galapagos

Travel writer Jo Kessel filmed the ‘ultimate wildlife cruise’ aboard Hurtigruten’s newest addition to its fleet, Santa Cruz II. The footage shows how an expedition voyage differs from a conventional one, zipping between islands on inflatable zodiac boats and going on hikes with expert naturalists who help spot the 15 iconic species unique to the Galapagos islands, including sea lions, giant tortoises and the very rare red-footed booby. Plus, it reveals how passengers can drive the ship and gives the inside scoop on how to extend your adventure with a post-cruise stay at Mashpi Lodge, an award-winning eco-retreat deep in the Ecuadorean Cloud Forest.

When Norwegian cruise line Hurtigruten started sailing along Norway’s coastline back in 1893 it was more a ferry than a cruise, servicing the country’s remote fishing communities. But the past 130 years have seen Hurtigruten expand its offering and it’s now an international liner to be reckoned with. But it’s not a conventional cruise line.

Its 16 ships are small to mid-size (the largest carries 528 passengers) and offer itineraries for travellers craving adventure at sea – but not on a big ship. Its voyages span the globe, including in the Galapagos thanks to its recent acquisition of the 90-passenger expedition ship the Santa Cruz II.

I was excited to be one of the first people on the new ten-day expedition to this Ecuadorean archipelago and decided to capture the voyage on camera, including a post-cruise stay in the Cloud Forest.

There are no direct international flights to the Galapagos and so the adventure – as well as the film – starts by exploring Quito which, at 9,186ft (2,800m) is the world’s second-highest capital (behind La Paz in Bolivia, which sits at 3,869m/12,693ft).

We visit plazas and churches and a colourful local market which, as well as selling fruit and veg, has shamans who heal for a fee. Mine swats me with a bouquet of herbs and bizarrely I do feel better afterwards!

Quito is circled by volcanoes, many of which are active and Cotopaxi is its showstopper. It last erupted in 2015 and its snow-capped summit soars to 19,685ft (6,000m). The expedition takes us hiking around the base and is the last adventure before we board a plane for a two-hour flight to the Galapagos. 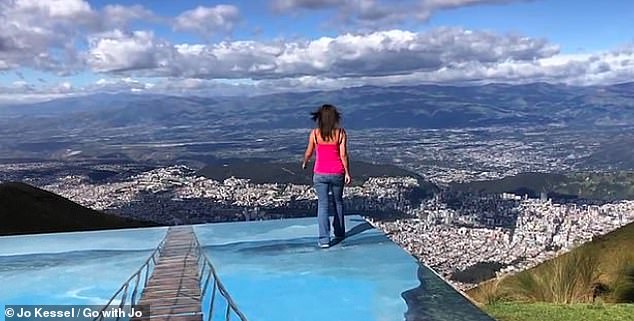 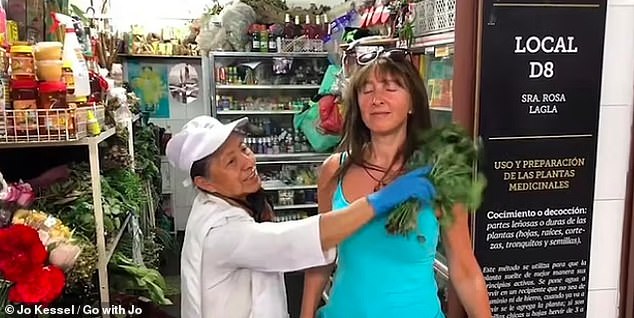 In Quito, a colourful local market has shamans who heal for a fee 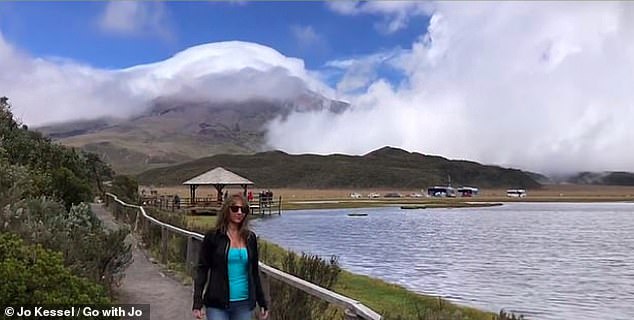 This remote South Pacific archipelago is 621 miles (1,000km) west of the mainland and aerial views from the plane as we approach show the desolateness of these tropical, volcanic islands – there are 13 major ones as well as a plethora of smaller isles and islets, only three per cent of which are inhabited.

The 90-passenger Santa Cruz II is our expedition ship for the next six nights and is waiting for us out at sea.

Cabins are smart and comfortable, with large picture windows and impressive facilities for a vessel this size. 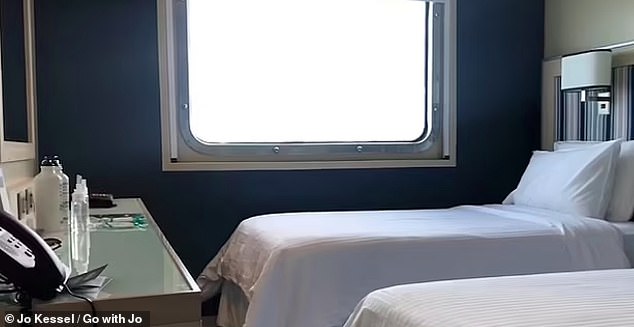 Everywhere comes with a view, from the gym to the hot tubs to the sun deck (the perfect spot for a tipple) to the terrace decked with loungers.

It’s here on a sun bed that I read a book gifted to all expeditioners called ‘The Galapagos Big 15’. It lists the 15 iconic species unique to the archipelago and encourages us to put a tick next to each one once it’s been spotted.

Unlike a conventional cruise, an expedition involves getting in and out of inflatable zodiac boats to explore and the film features the famous ‘Galapagos handshake’ required to board one – it’s a way of holding crew members’ arms to help you step in and out safely.

Everywhere on Santa Cruz II comes with a view, according to Jo, including the hot tubs 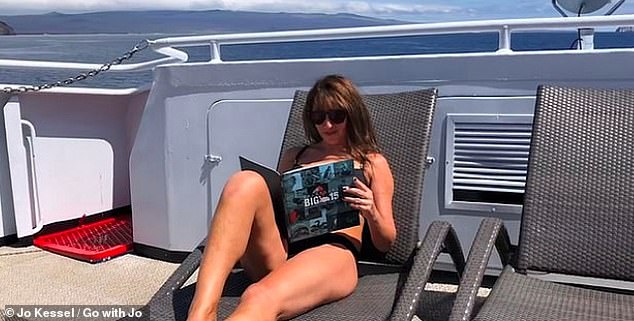 Jo reads a book gifted to all expeditioners called ‘The Galapagos Big 15’, which lists the 15 iconic species unique to the archipelago

It’s exciting to follow in the footsteps of Charles Darwin and these islands still look exactly as they did when he visited in 1835.

Guides lead us on daily hikes as we search for the ‘Big 15’. The moment we step onto land it’s clear that every inch of these islands teams with wildlife, all brilliantly camouflaged, so much so that we must be careful where we tread.

Galapagos sea lions are everywhere (they resemble rocks) including on the white-sand beach of our first port of call, the island of San Cristobal.

Here there are red-footed boobies, which don’t exist anywhere else on the planet. Elsewhere we see blue-footed boobies, the Nazca Booby, hawks, frigates, mating albatrosses and several different species of iguanas. 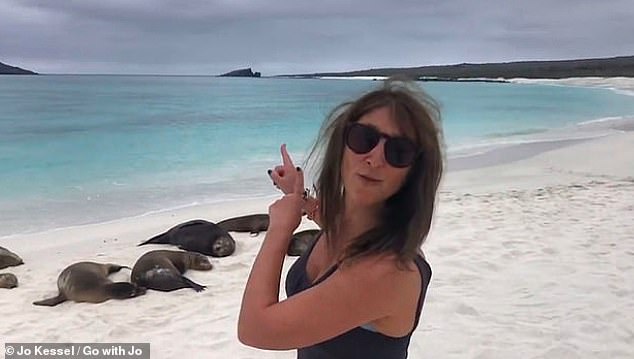 Galapagos sea lions are everywhere, including on the white-sand beach of Jo’s first port of call, the island of San Cristobal (above)

The accompanying naturalists explain how these species adapted to their environment over time. Take the marine iguana – it evolved from drinking freshwater to saltwater in order to survive.

The Unesco-protected Galapagos are one of the world’s best examples of responsible tourism. Strict rules – visitors mustn’t disturb or get too close to the animals – allow the Big 15 to thrive. I’ve a soft spot for the islands’ giant tortoises, especially the very large (and very old) one I capture on film who moves bang on cue… albeit very slowly!

The Santa Cruz II offers a host of water-based activities, from kayaking to paddle boarding to snorkelling and my favourite marine life to spot are green sea turtles. They’re not one of the Big 15, but there’s something wondrous about swimming and paddling alongside them. Other exciting non-Big-15 sightings include sharks and dolphins. 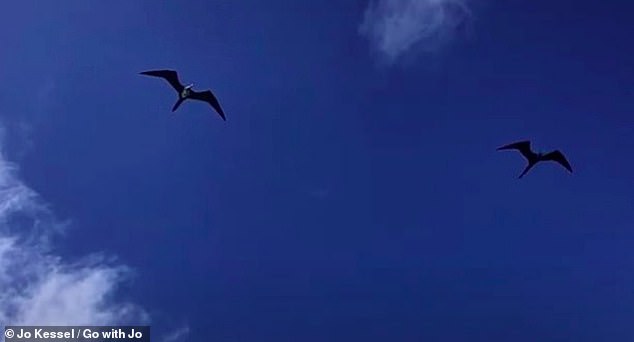 There’s something wondrous about swimming and paddling alongside the wildlife of the Galapagos Islands, Jo reveals 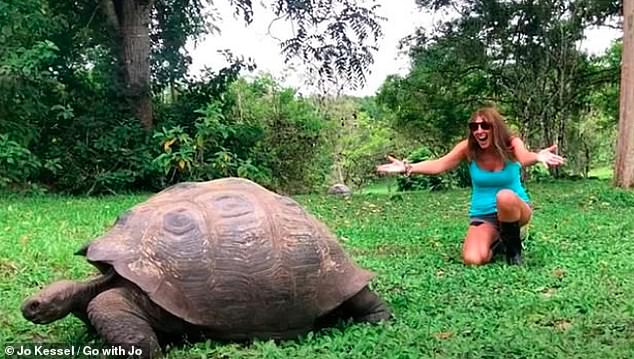 ‘I’ve a soft spot for the islands’ giant tortoises,’ Jo admits. Above is the ‘very large (and very old) one’ that she encounters on the trip

SANTA CRUZ II AND THE GALAPAGOS BY THE NUMBERS

This is an active holiday and we constantly need refuelling.

Food on board is seriously good, be it kebabs barbecued on the sun deck to creative, waiter-served Ecuadorean feasts, from Galapagos Bluefin tuna to the chicken in coffee sauce featured in the film.

There’s an intimacy about being on a small ship. The Santa Cruz II operates an ‘open bridge’, which means you can say hello to the captain at any time. Get lucky and you might be allowed to steer the vessel.

You might even get to don the captain’s hat while you do it! It’s great fun, although I must confess to being petrified about crashing.

The expedition is so exhilarating that nobody wants it to end and happily Hurtigruten offers an option to extend your trip. 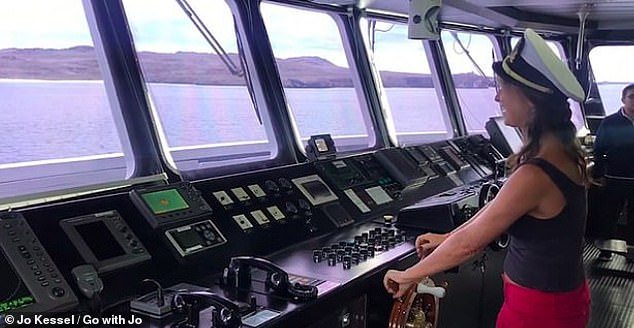 You can say hello to the captain at any time on Santa Cruz II – and you might even be allowed to steer the vessel, Jo reveals 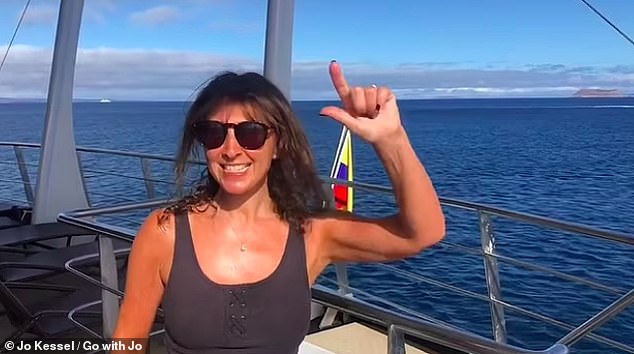 Jo says: ‘The expedition is so exhilarating that nobody wants it to end’

That option includes a stay at an eco-retreat called Mashpi Lodge deep in the Ecuadorean Cloud Forest.

Ever since watching an episode of BBC’s ‘Amazing Hotels’ (which featured this luxury hideaway) I’ve longed to visit – tacking it onto the end of a Galapagos cruise proved the perfect opportunity.

Mashpi is made of glass which means that wherever you are in it – be it your room, restaurant or communal areas – you feel like you’re in the jungle. 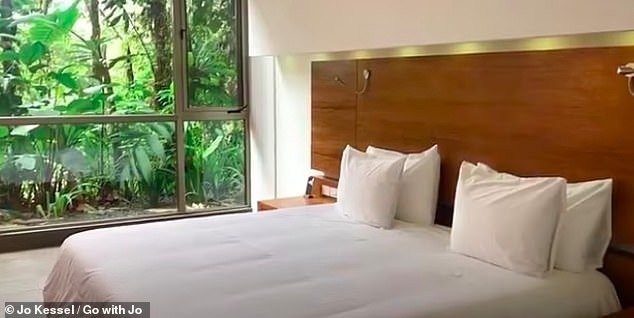 ‘The great thing about the Galapagos – and the Ecuadorean Cloud Forest (pictured) – is that you’re witnessing nature untouched since time began,’ Jo reveals 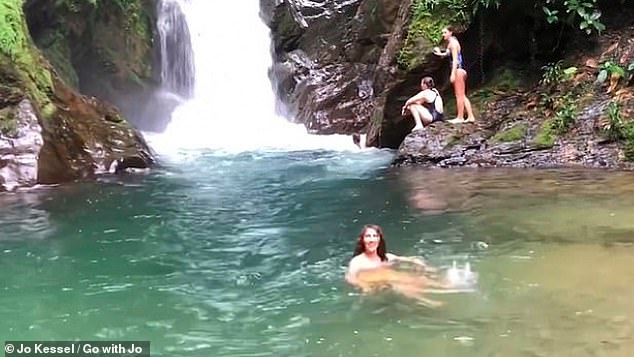 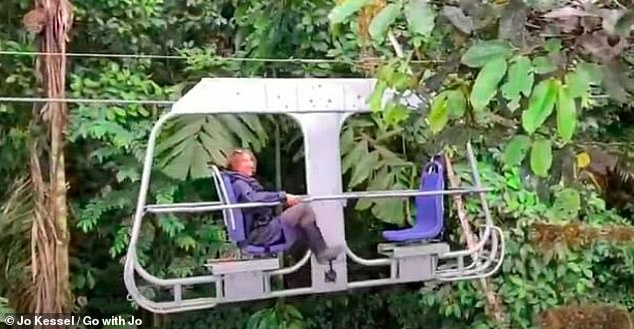 There’s wildlife here too, spotted during night hikes with guides, including spiders (tarantulas included) and countless different frogs, most no bigger than a tuppence, all of them very rowdy and some of them newly discovered.

Better still, the hotel offers adventure, from pedalling its ‘Sky Bike’ above the clouds to hiking through the jungle basin river to swimming in remote waterfalls.

By day it’s like being on I’m A Celebrity, by night you get to enjoy a gourmet meal and sleep in a luxury bed.

A wildlife expedition cruise is the ultimate adventure.

And the great thing about the Galapagos – and the Ecuadorean Cloud Forest – is that you’re witnessing nature untouched since time began.

For more from Jo, visit Go with Jo. 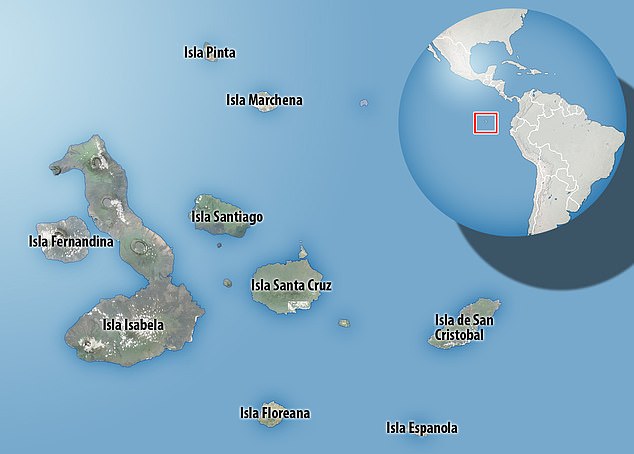 The Galapagos archipelago consists of 13 major islands as well as hundreds of smaller isles and islets, only three per cent of which are inhabited 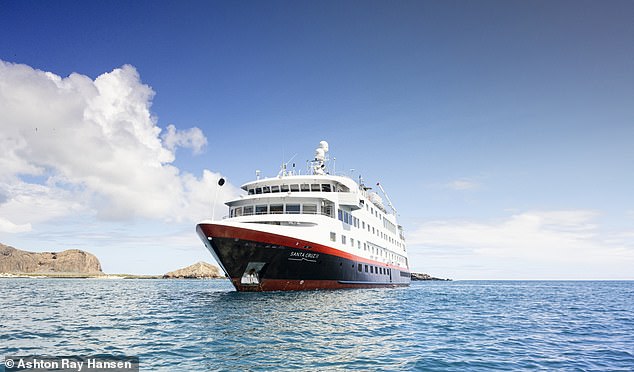 ‘There’s an intimacy about being on a small ship,’ Jo says of Santa Cruz II 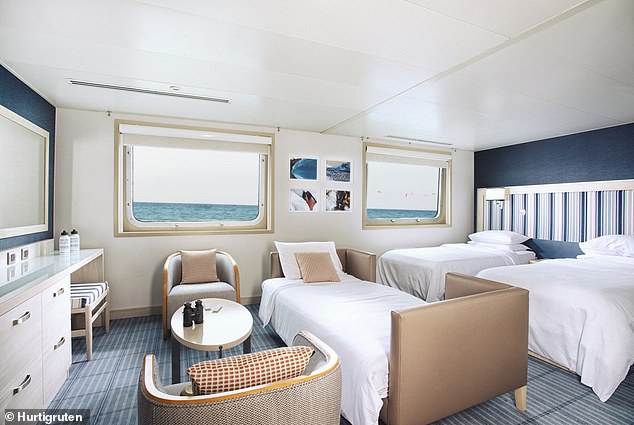 Santa Cruz II has 50 cabins and can sleep 90 passengers. Above is the Darwin Suite 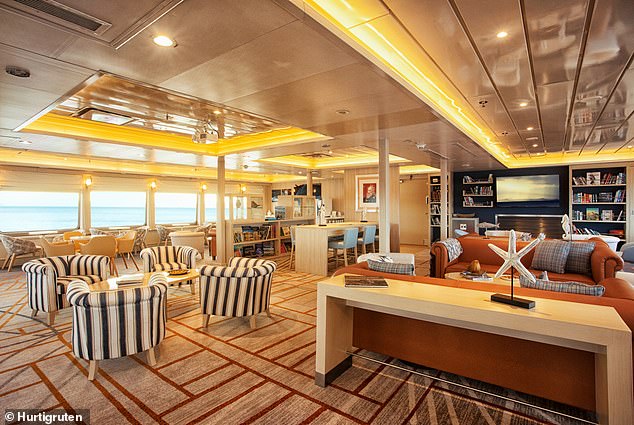