EXPRESS INFORMER > News & Politics > Thinking of living in Bali as the WFH dream? Couple that did outline the low costs of living there

A young surfing-mad couple have shared the enviable costs of ‘simple’ living in Bali – and what they get for free – after making a dream move from corporate careers to the tourist paradise.

Jean and Vitaly Voronkova moved to Bali in July for the island lifestyle after living in Moscow, Singapore, Dubai and Vietnam and detailed the price of eating, drinking, building a home office, shopping, accommodation and transport in a social media post.

Ms Voronkova, a former lawyer who has a popular YouTube channel, estimated the couple’s all-up costs of living in Bali for a year are about A$25,000, after initially setting themselves up.

That is based on ‘total monthly running costs’ of just over $2000.

Former corporate couple Jean and Vitaly Voronkova moved to Bali in July for the island lifestyle after living in Moscow, Singapore, Dubai and Vietnam 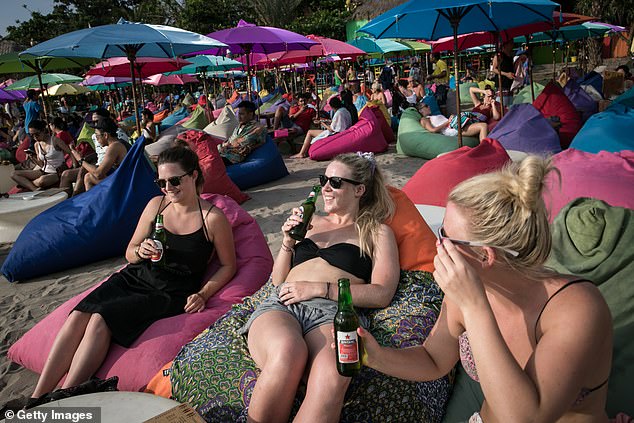 Although Ms Voronkova doesn’t drink, she said beers on Bali can cost $12 for five small bottles

‘I left a corporate legal career across Singapore and Dubai for this life and it took me almost 10 years to make a proper transition away from my former existence to my current lifestyle, but no regrets,’ Ms Voronkova said.

‘What we do now leaves me happy and fulfilled everyday.’

Ms Voronkova even titled one of her clips ‘My “boring” simple life in Bali makes me so happy. No urban city living for me’. 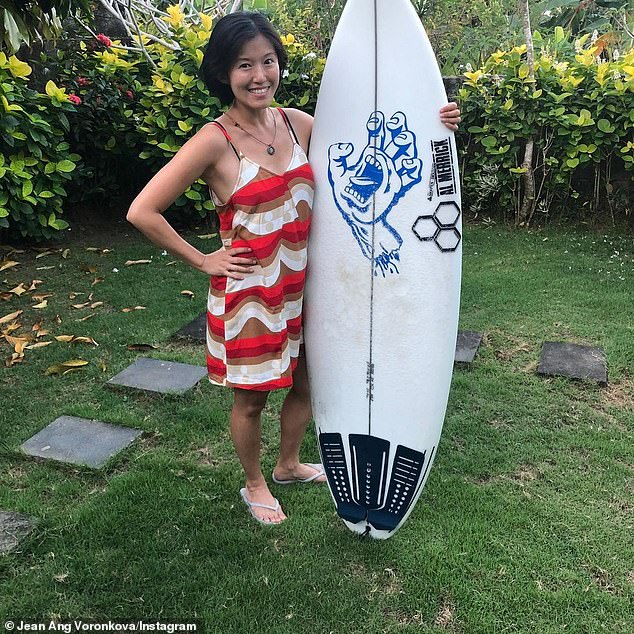 Ms Voronkova is a former corporate lawyer and surfing teacher 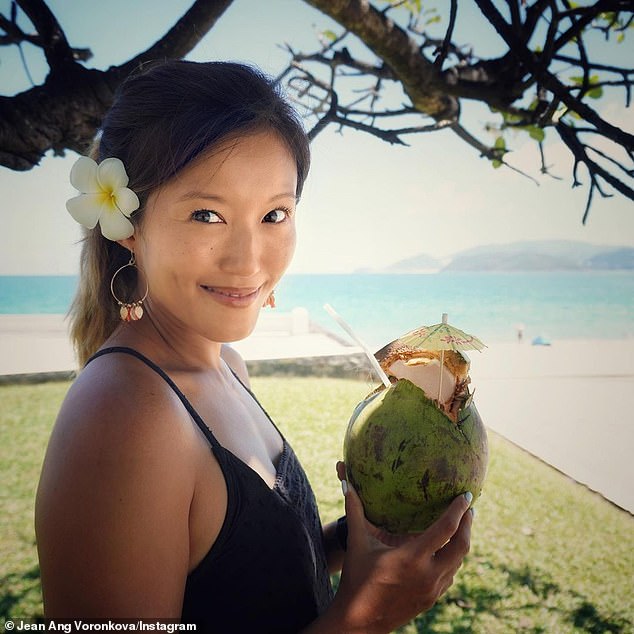 Ms Voronkova doesn’t drink alcohol and prefers a fresh coconut, which costs around $2.75 on the beach 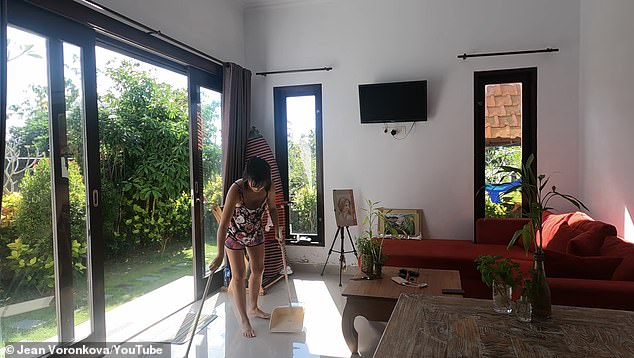 When they’re not working on ‘business’ projects, the couple spend time surfing, cooking, playing guitar, painting, and also photographing and exploring the islands.

‘On most days we wake up and we go for a surf. It gets us out of the house early,’ she said.

Their biggest cost is renting a modern one-bedroom home with a garden in a ‘quiet’ part of Bali, which they say would costs around $550 a month.

With a shorter lease and additional costs, such as a cleaner, that could rise to around $800 a month.

Their electricity costs $48 a month and they have a work desk custom-made, which cost $77 to build.

The couple rent a scooter to explore the island they live on, which costs around $95 a month, including six refills of gas.

They try to live with minimal technology, but both have phone plans and data costs, which reach up to $40 a month for two phones. 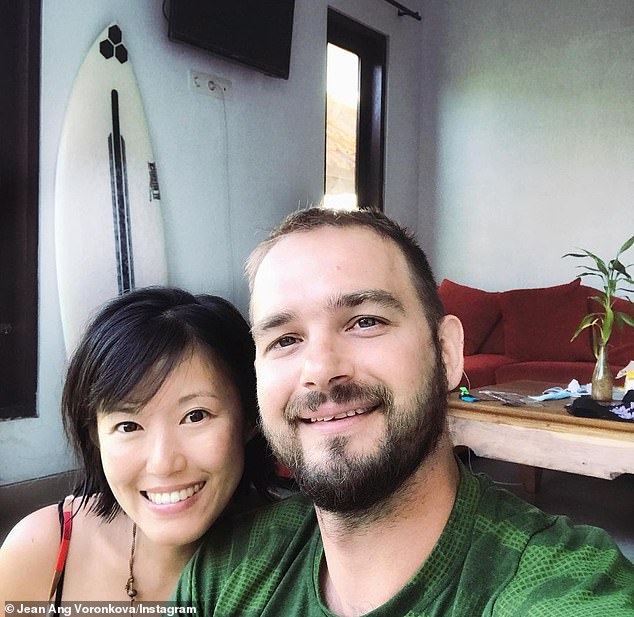 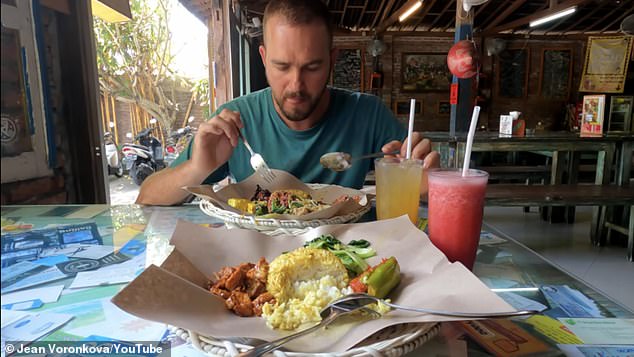 Vitaly Voronkova tucks into a dinner of street food. Two people can eat dinner this way for around $5 his wife Jean said

‘We don’t drink alcohol and we don’t party, and generally we lead a peaceful quiet existence in a more secluded part of Bali, as opposed to Seminyak, Kuta,’ Ms Voronkova says.

Aside from surfing, they love relaxing at the beach, drinking coconuts or soft drinks, which are up to $3 each.

Although she doesn’t drink alcohol, Ms Voronkova pointed out beers are cheap, coming in at $12 for five small bottles. 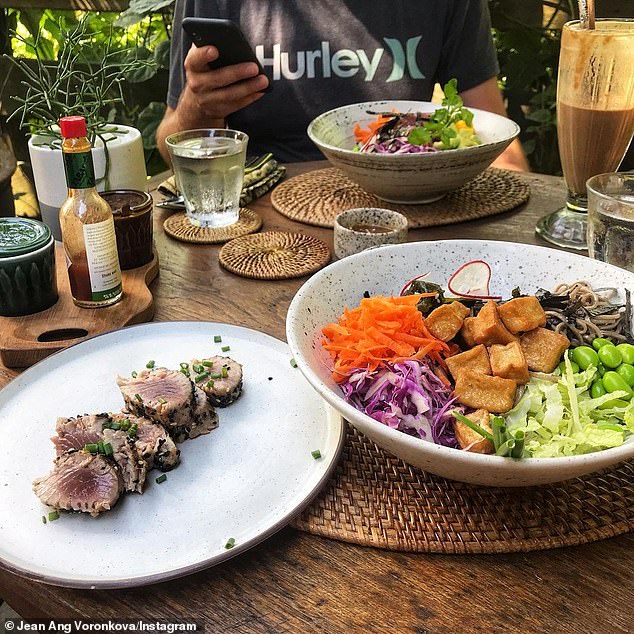 Back at home, water is an essential, costing $2.75 for a large bottle to drink or cook with.

They buy two a week, which means water costs are up to $22 a month.

They have laundry done by a local woman who charges around $16 a month.

Food is one of the cheapest costs, with most fruit and vegetables costing a few cents at their local store.

Eating street food is ultra-cheap, around $3 a meal, while something fancier in a ‘hipster cafe’ would cost about $30 for them both.

The couple have a modern kitchen in their rented home, but also barbecue fish and chicken.

Fully-vaccinated Australians are expected to be free to travel the world from late this year or in early 2022.

That is unlikely to mean Bali initially though, according to information provided by Qantas.

Its flights to cities in Asia and South Africa with low vaccination rates and high Covid-19 case numbers will likely remain off the cards until at least April 2022.