Thierry Henry insisted Arsenal’s convincing victory over Tottenham was not surprising because the Gunners have regularly shown their quality against their rivals – but wrongly claimed they had beaten them in 2020 and 2019.

The Frenchman was in the crowd to watch his former side claim a 3-1 victory at the Emirates to go level on points with their rivals and pile the pressure on Spurs boss Nuno Espirito Santo.

Henry will be analysing the match with Jamie Carragher on Monday Night Football this evening but was asked ahead of the programme whether he had been surprised by Arsenal’s performance in the north London derby. 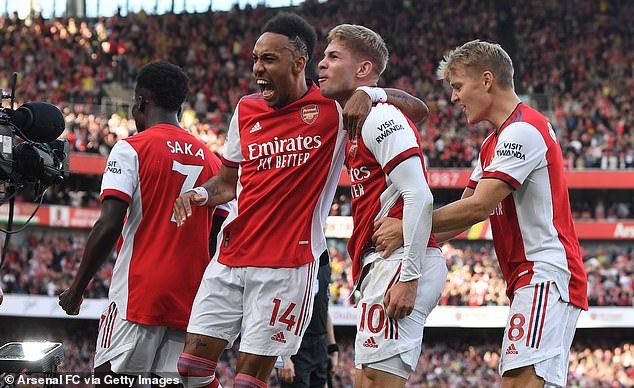 ‘Not really because I’ve seen it before, we’ve done that before to Tottenham,’ Gunners legend Henry told Sky Sports.

‘I wasn’t that surprised because we did it last year and we did it the year before but having said that, it was an enjoyable afternoon. A bit edgy at the end, but I wasn’t surprised.’

Arsenal were 3-0 up inside 34 minutes on Sunday with Emile Smith Rowe, Pierre Emerick-Aubameyang and Bukayo Saka all on the scoresheet. 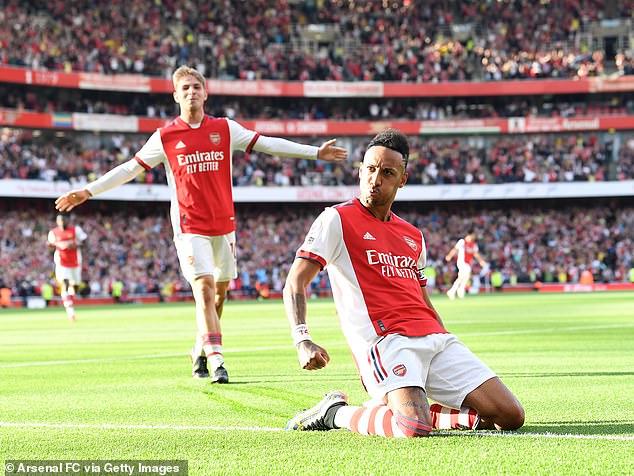 Son Heung-min pulled a goal back for Spurs in the 79th minute but the Gunners held on to take all three points.

Henry reserved special praise for Smith Rowe and Saka, with the youngsters Arsenal’s standout players on the day.

‘What a day. You want to see that more often than that, but for me the two kids – especially for the academy and what it represents. It’s contagious. We need that at Arsenal, we need these type of performances.

‘That is why I think Mikel went for those guys that have that DNA in them. They know what it is to beat, and win, and not suffer against Tottenham.’

Arsenal had beaten Spurs in their previous match at the Emirates during last season, with Mikel Arteta’s side claiming a 2-1 victory back in March.

But before that, Spurs had won the two previous north London derbies at their own stadium.

Up until six months ago, Arsenal had been struggling against their arch-rivals with March’s victory their first win against Spurs in five previous derbies.

Arteta’s side are now level on points with Spurs after three wins on the bounce and sit 10th in the table.