EXPRESS INFORMER > Sports > These Canadian athletes should shine brighter in 2021

Quick note before we get started: The Buzzer is off for the holidays starting tomorrow. Back on Monday, Jan. 4.

Maybe next year will be better than last

2020 was a year of missing stuff. Big events, special occasions, even those casual get-togethers we used to take for granted — a lot of them just disappeared. Hopefully to return in the not-too-distant future.

Many Canadian athletes experienced this in their professional lives as well. Especially those affected by the postponement of the Tokyo Olympics. But their time to shine should be coming in 2021. So, for our last newsletter of the year, here’s a look at some of them:

Andre De Grasse: The star sprinter saves his best for the big competitions. He burst onto the scene at the 2015 world championships with a surprising bronze in the 100 metres and another in the 4×100 relay. In 2016 he became a national hero by going toe to toe with Usain Bolt in the GOAT’s final Olympics and coming away with a silver in the 200 and bronze in both the 100 and 4×100. Hamstring injuries ruined his next two years, but De Grasse came back strong in 2019 with a silver in the 200 and another bronze in the 100 at the worlds in the fall. He looked poised for another big Olympics, and that can still happen as long as the one-year postponement didn’t slow his momentum.

Bianca Andreescu: If 2019 seemed like a dream for her — coming out of nowhere to win Indian Wells, the Rogers Cup and the U.S. Open to become Canada’s first Grand Slam singles champion — then 2020 was a nightmare. Andreescu didn’t play a single match this year after hurting her knee at the WTA Finals in October 2019. The pandemic can be partly blamed for that, but Andreescu recently alluded to some personal issues keeping her off the court. She says she’s feeling better now (physically and mentally/emotionally) and plans to play in the first Slam of 2021, the Australian Open, which has been pushed back to February. The Tokyo Olympics could also be in her future.

Kylie Masse: The back-to-back women’s 100-metre backstroke world champion is favoured to win her first Olympic gold medal after taking bronze in that event in 2016 in Rio. She also has a shot to reach the podium in the 200 back and maybe a relay race or two.

Damian Warner: One of decathlon’s most reliable performers, Warner reached the podium at three of the last four world championships and took bronze at the 2016 Olympics. In Tokyo, he has a good shot to become Canada’s first-ever gold medallist in the highly regarded event.

Christine Sinclair: It seems like a lifetime ago, but Sinclair managed to break the career record for most international soccer goals back in January, just before the pandemic shut everything down. Tokyo could be the last Olympic hurrah for the 37-year-old Canadian captain, who hopes to lead the women’s team to its third consecutive medal.

Men’s basketball team: Jamal Murray’s phenomenal run in the NBA playoffs boosted the already high hopes that Canada’s crop of young talent can push the squad to its first Olympic appearance in more than two decades. We’ll find out when Canada’s last-chance qualifying tournament tips off June 29 in Victoria.

Women’s basketball team: The men get more press, but the women have already qualified for Tokyo and are ranked an all-time-high fourth in the world. They’ll have a shot to win Canada’s first Olympic basketball medal since 1936 in Berlin, where a men’s tournament was played outside on dirt courts.

Laurence Vincent Lapointe: This was supposed to be the year the canoe standout put all her troubles behind her. In January, Vincent Lapointe was absolved of knowingly taking a banned drug, erasing a potential four-year ban and clearing the way for her to compete in Tokyo. Assuming her performance hasn’t dipped, Vincent Lapointe should be the star of the first-ever women’s Olympic canoe events. She’s favoured to win gold in both of them — the 200m singles and 500m doubles.

Sarah Pavan and Melissa Humana-Paredes: Beach volleyball tends to fall out of view in non-Olympic years, but it’s always one of the most popular events when the Games are on. Pavan and Humana-Paredes could be big stars in Tokyo. They won the women’s world championship in 2019. 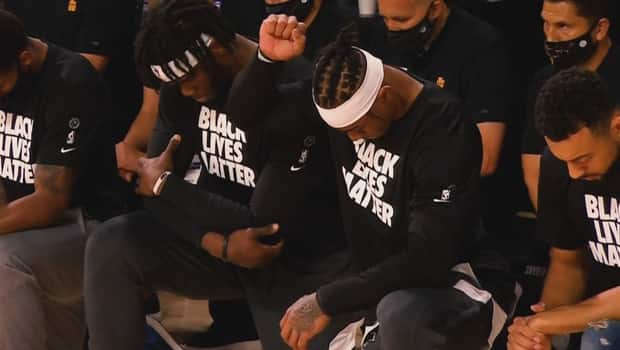 There were so many uplifting sports moments in a year that was so challenging. We look back at how sports navigated and shone through in 2020 5:13

The NHL released its 2021 season schedule — but we’re still waiting for the provinces’ answer on the all-Canadian division. As previously announced, the shortened regular season opens Jan. 13. There are two all-Canadian matchups that night (Montreal at Toronto, Vancouver at Edmonton) and the seven Canadian-based teams are still slated to play only each other for the entire regular season and first two rounds of the playoffs. Still up in the air, though, is where those games will take place. The league would like teams to play out of their home arenas where possible, but the plan still needs approval from various levels of government in Canada. The latest official word on that, from Ontario sport minister Lisa MacLeod today, is that talks are still ongoing among the federal government, the five provinces that are home to NHL teams and the various cities and regions involved. The fact that they’re still discussing the plan suggests that not all the governments are completely comfortable with it. But a few encouraging signs for those hoping the all-Canadian division gets approved: The provinces are expected to respond as a group (so it sounds like they’re at least on the same page) and an answer could come as soon as today. The clock is ticking, though. Opening night is three weeks from today. Read more about the government talks here and more details on the schedule here.

Nikita Kucherov is out for the season. The leading scorer in the 2020 playoffs needs hip surgery and will miss the entire regular season, the Tampa Bay Lightning announced today. The team hopes the 2018-19 season MVP can return for the playoffs.

Canada sends more players to the NBA than any other non-U.S. country. For the seventh year in a row, Canada leads all “international” nations in total number of players on opening-night rosters. According to the league, 107 international players from 40 countries are currently rostered, and a record 17 of them are Canadian. It’s 18 if you include Raptors big man Chris Boucher, who was born in Saint Lucia but moved to Canada when he was five. Read more about the Canadians in the NBA here.

The NHL changed one of its most unpopular rules. When the season opens Jan. 13, a player’s skate will no longer have to be in contact with the ice in order to be onside. Previously, a player was considered offside if his skate hovered over the blue-line, which resulted in some goals being disallowed upon video review. Read more about the change here.

The Canadian junior hockey team plays its first — and last — exhibition game today. Monday’s date with Sweden was cancelled because of positive coronavirus tests on the Swedish team, so today’s game vs. Russia at 6 p.m. ET is Canada’s only warmup before the world junior championship starts in Edmonton. With all three of Canada’s major junior leagues currently shut down, the defending champions will be going in pretty cold. Canada’s tournament opener is Boxing Day vs. Germany. Its other round-robin games are Sunday vs. Slovakia, Tuesday Dec. 29 vs. Switzerland and Thursday Dec. 31 vs. Finland. They all start at 4 p.m. ET. The knockout round starts Jan. 2. Read more about this most unusual world juniors here.

It’s been a year. To help say goodbye (good riddance?) to 2020, CBC Sports montage maestro Tim Thompson put together a touching video showing how sports has survived — and helped us get through — this strange and tough time. Watch it here. And here’s to better days ahead.