Theatres might not be open until next year, Oliver Dowden warned today – as he unveiled a £1.6billion bailout to stop thousands of arts venues going bust due to lockdown.

The Culture Secretary said it would ‘challenging’ for pantomime season to happen this Christmas and it will be ‘some time’ before performances of plays and shows can happen, even outdoors.

But he dodged questions over why it was possible for people to go on aeroplanes when they cannot be in a theatre, merely insisting there will be ‘mitigations’ for passengers.

Stricken cultural venues have hailed news that they will be able to seek emergency grants and loans, in what ministers say is the biggest ever one-off investment in UK arts.

With no live performances and more than 350,000 staff furloughed, the industry has warned that it will be devastated without cash aid.

In interviews this morning, Culture Secretary Oliver Dowden said it would ‘challenging’ for pantomime season to happen this Christmas and it will be ‘some time’ before performances can happen indoors 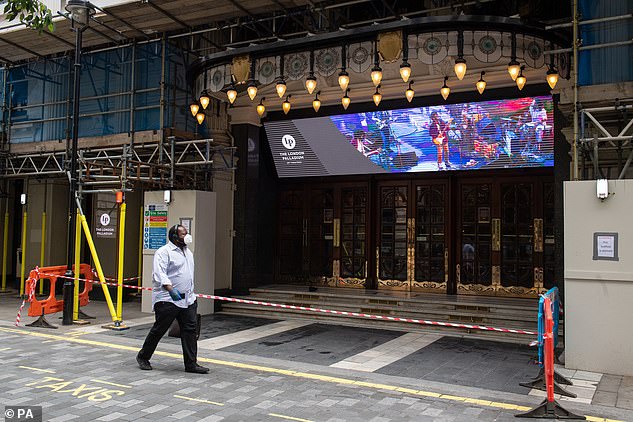 A man wearing a face mask is pictured above walking past the London Palladium. With no live performances and more than 350,000 staff furloughed, the industry has warned that it will be devastated without cash aid

Mr Dowden has been pushing hard behind the scenes to extract the maximum possible from the Treasury, while impresarios and arts chiefs have been warning of dire consequences unless the sector is propped up while it cannot function.

But announcing the money in a round of interviews this morning, the Cabinet minister warned that theatre performances without social distancing are ‘some way off’.

He said the reduction of social distancing rules, such as on planes, has only been implemented in ‘exceptionally limited circumstances’ and insisted ‘slow and baby steps’ must be taken.’We are simply not at a point that we can do that for theatre, nor will we be for some time,’ he told BBC Radio 4’s Today programme. 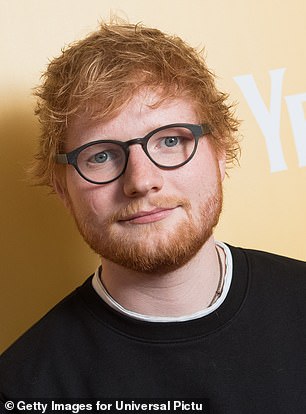 Last week 1,500 artists including Sir Paul McCartney, The Rolling Stones and Ed Sheeran (pictured above) wrote to the Government warning that the music industry faces a bleak future without more aid

Mr Dowden said he hoped outdoor performances might be able to return ‘shortly’ but there remained a ‘real risk’ of coronavirus transmission inside theatres.

He was also very downbeat on the prospects for a pantomine season this year.

‘I would love to be able to announce that pantos can return but I have to say it will be quite challenging to be able to get to that point,’ he said.

‘Because if you think about a panto, and we all love going to the panto for the joy of it, but it also supports local theatres, you’ve got granny through to grandchild all packed in together, you know how kids are encouraged to shout and scream at panto season, there’s lots of sort of interaction.

‘So I would love us to be able to do it. We’re working with Public Health England and others to see about mitigations but I just want to be a bit realistic about the challenges of getting us back to that point any time soon.’

Boris Johnson has promised to set out a timetable this week for when mass events can resume, but it is thought theatres, concerts and festivals may have to wait until 2021 to restart.

‘The UK’s cultural industry is the beating heart of this country,’ he said.

‘This money will help safeguard the sector for future generations, ensuring arts groups and venues across the UK can stay afloat and support their staff whilst their doors remain closed.’ 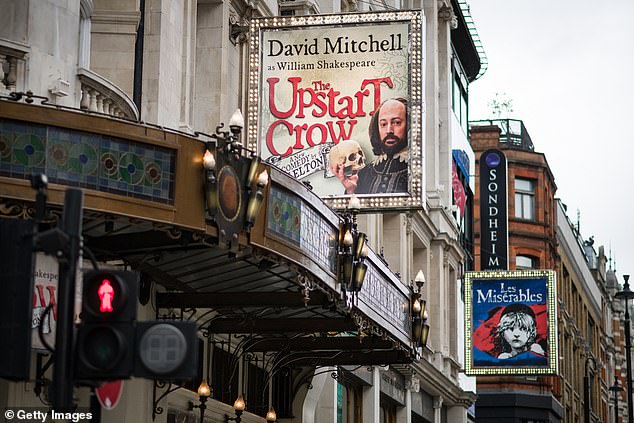 Decisions on sharing out the bailout money will be made by bodies such as the British Film Institute, Arts Council England, the National Lottery Heritage Fund and Historic England.

Venues will be able to apply for £880million in grants and £270million in loans.

There will be £100million targeted at museums, galleries and heritage sites, £120million to restart infrastructure projects and extra money for Scotland, Wales and Northern Ireland.

‘That’s why we’re giving them the vital cash they need.’

Last week 1,500 artists including Sir Paul McCartney, The Rolling Stones and Ed Sheeran wrote to the Government warning that the music industry faces a bleak future without more aid.