Robotic engineers have unveiled what they claim are the world’s fastest shoes – footwear designed with eight wheels that increase walking speeds by 250 percent.

Called Moonwalkers, they strap around your shoes and propel you forward using tiny electric motors that power weight wheels, mimicking that of roller skates.

The shoes are the brainchild of a team of robotics engineers at Shift Robotics, which thought of the idea when the founder started walking to work and realized powered shoes would dramatically cut his commute by more than half.

This is because it increases walking speeds from the average 3mph up to 7mph.

The team markets the tech, which retails for $1,399, for those ‘who have the need for speed’ and see’s Moonwalkers as the future of walking.

Shift Robotics has a Kickstarter running for its Moonwalkers that has a raise goal of $90,000 – the firm has generated $82,820 in pledges to date.

The secret sauce to the shoes is the unique machine learning algorithms that adapt to the user’s gait, which Shift Robotics states makes ‘them an extension of people’s legs.’

The idea came about when founder Xunjie Zhang was riding a scooter to work and was almost hit by a car.

‘That is when I started asking myself why I never walked the 30 minutes,’ Zhang said in a video. 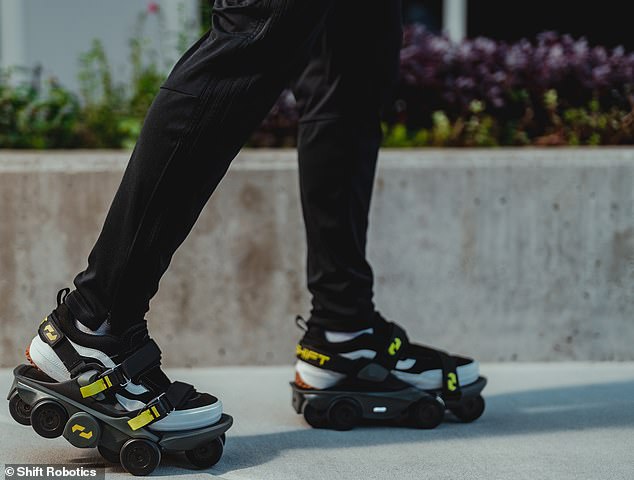 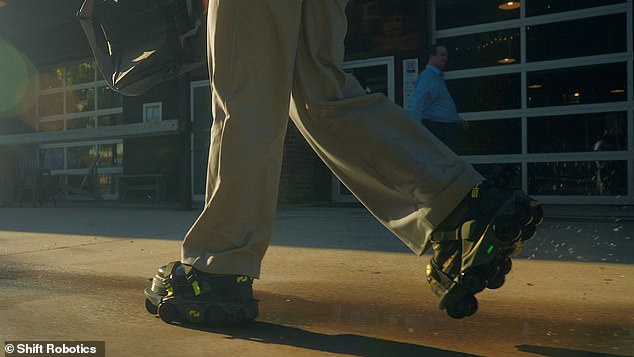 The algorithm, according to the company, allows the shoes to feel more like an extension of the legs and not just blocks on your feet 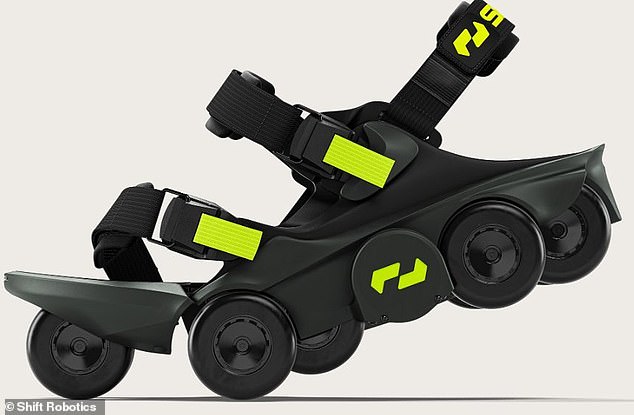 Moonwalkers strap around your shoes using magnetic straps. The pair, however, will cost you $1,399

‘Not only is it a safe commute, but it is also part of who we are. So I started on a mission to enhance walking instead of replacing it.’

From there, he used his experience as a jet engine propulsion engineer and spent the last four years trying to find a way to increase the speed of walking, relying on the body’s own engineering.

Zhang and his team, which are engineers that once worked at Carnegie Mellon, developed a custom-built motor controller, precision gearbox and efficient battery pack that were all shrunk down to a smaller size and intricately placed to make the shoes.

The shoes are powered by battery cells that fully charge in 1.5 hours for over six miles of range.

‘Moonwalkers start in Lock Mode, where our electronic brake fully locks the wheels. To enter Shift Mode, where you walk at the speed of a run, lift your right heel in the air and rotate it clockwise towards your left leg while keeping your toe on the ground,’ Shift Robotics shared.

‘To go back into Lock Mode, lift your right heel in the air and then back down to the earth as usual. Now you are ready for stairs, buses, trains, or anywhere else where you do not want to walk at the speed of a run.’

And as you walk, the AI-powered algorithms learn your moves to provide natural walking motions.

Just as Zhang mentioned, humans are looking to transform the way we walk and a separate innovation from Stanford University is also on the same mission.

Researchers unveiled an exoskeleton boot last week that enables the wearer to walk nine percent faster than with normal shoes, and with 17 percent less effort. 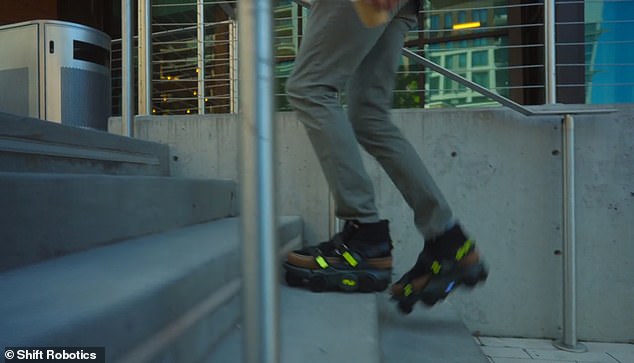 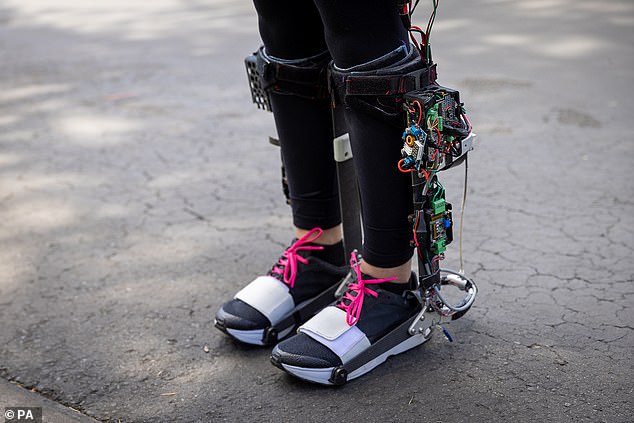 A separate innovation from Stanford University is also on the same mission. Researchers unveiled an exoskeleton boot last week that enables the wearer to walk nine percent faster than with normal shoes, and with 17 percent less effort

The robotic footwear comes with a motor that works with calf muscles to give the wearer an extra push with every step.

The precisely-timed motor controls the boot so that it imparts a ‘torque’ – a twisting force that can cause rotation around an axis – at the leg joint.

The set-up consists of one exoskeleton ‘boot’ worn on each ankle and a battery pack around the waist.

Each boot includes sensors to monitor movement, a motor to produce ‘assistive torques’, a carbon fiber and aluminum frame, and a shoe and a calf strap to transfer forces to the body.

The engineers also used a machine learning model to develop their untethered exoskeleton boot – which can be personalized to suit the wearer’s needs.