Backlash against The Witches: Disabled people including Paralympians criticize remake of Roald Dahl classic over its use of split hands

By Holden Walter-warner For Dailymail.com

On October 22, HBO Max released The Witches – the second adaptation of Dahl’s famous novel after the hit 1990 film.

Directed by Robert Zemeckis, it stars Anne Hathaway as the evil Grand High Witch who is revealed to have ‘split’ hands with just three fingers.

Disabled people have hit out at the movie for demonizing split hands, known as an ectrodactyly. 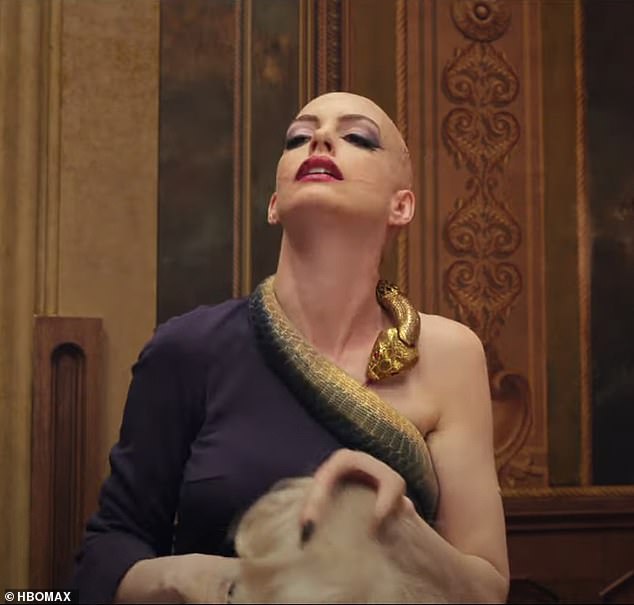 Directed by Robert Zemeckis, it stars Anne Hathaway as the evil Grand High Witch who is revealed to have ‘split’ hands with just three fingers

Amy Marren, a swimmer who won a bronze medal at the 2016 Paralympic Games, was one of the first to criticize the film and ask on Twitter if there was ‘much thought given as to how this representation of limb differences would effect the limb difference community.’

The Lucky Fin Project, a nonprofit to raise support and awareness for limb differences, also took to Twitter to criticize the movie and start a petition to boycott its viewing.

British TV actress Melissa Johns, who was born without a right forearm and hand, also criticized ‘The Witches’ for being irresponsible. 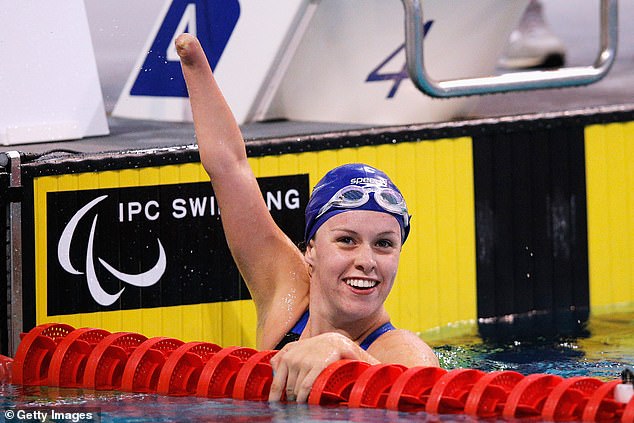 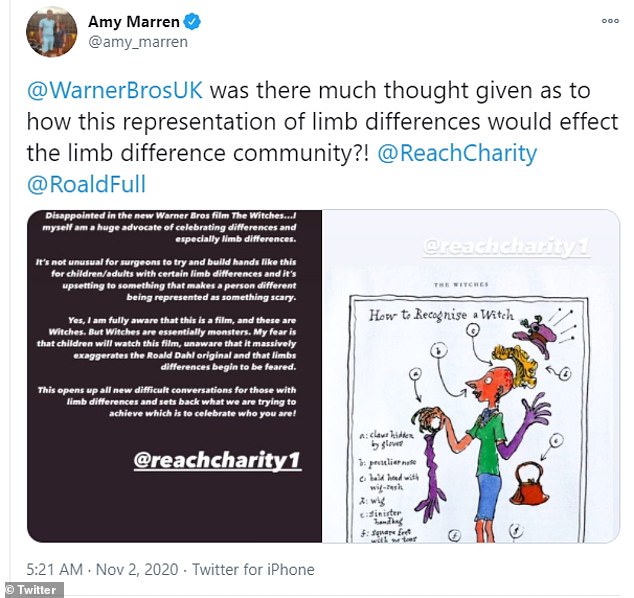 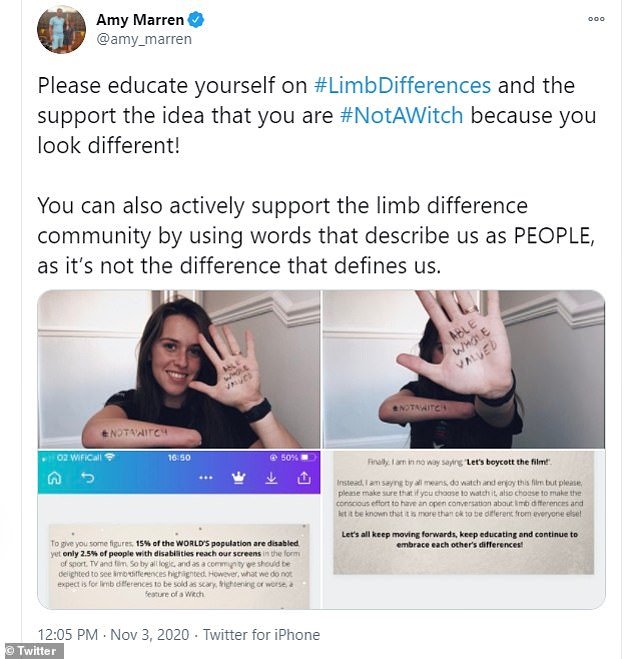 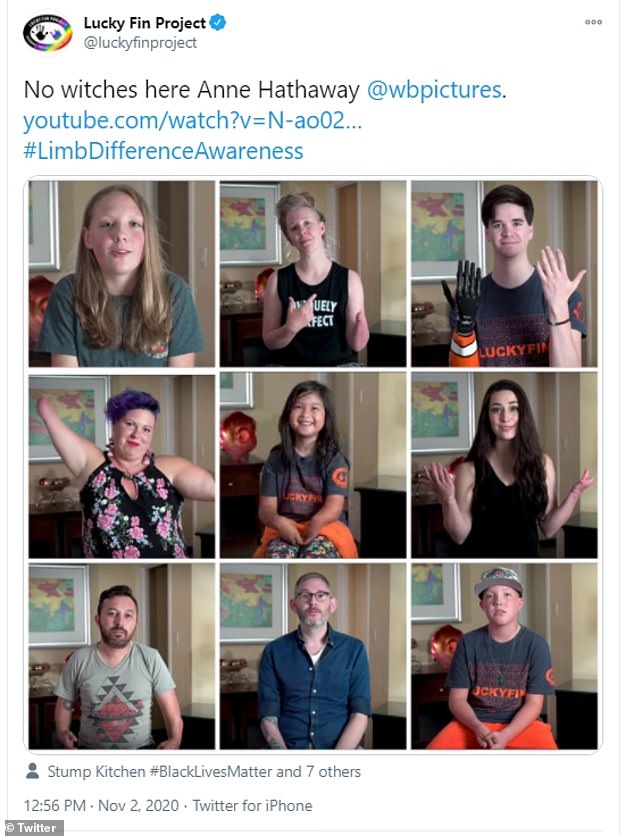 The International Paralympic Committee also called out the movie, using ‘#NotAWitch’ on social media to generate more reactions from the disability community.

Critics point out that neither the 1983 book, nor the 1990 film starring Angelica Huston, featured split hands.

In fact, Dalh describes the physical appearance of the witches in detail, and refers to them having claws rather than fingernails, but makes no mention of missing fingers or split hands.

Warner Bros. released a statement to Deadline, saying they are ‘deeply saddened to learn that our depiction of the fictional characters in ‘The Witches’ could upset people with disabilities’ and that they ‘regretted any offense caused.’

They added, ‘In adapting the original story, we worked with designers and artists to come up with a new interpretation of the cat-like claws that are described in the book. It was never the intention for viewers to feel that the fantastical, non-human creatures were meant to represent them.’

According to the National Organization for Rare Disorders, ectrodactyly presents at birth and its severity can range for those who have it. The condition appears in 1 in every 90,000-100,000 births worldwide. 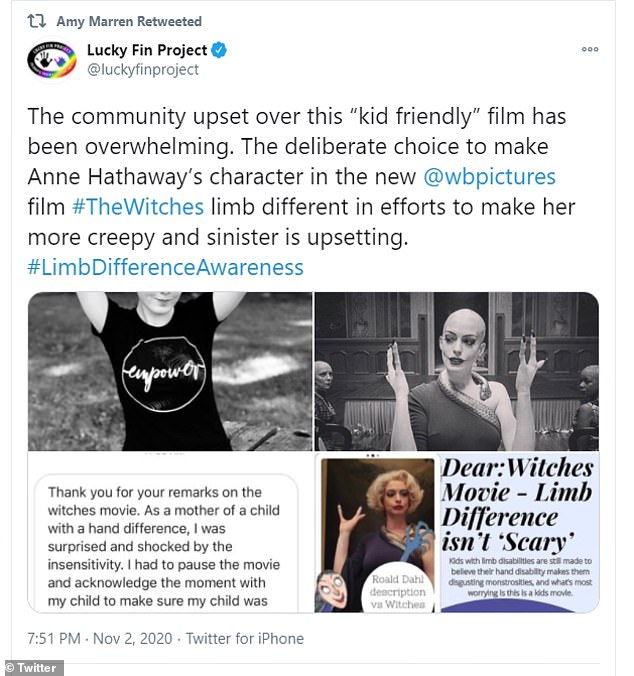 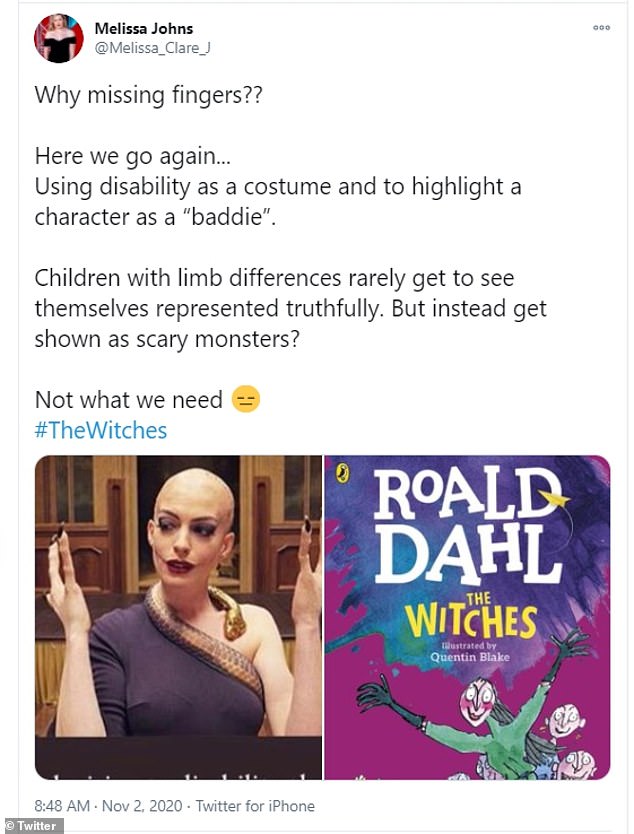 Actor Melissa Johns, who was born with limb differences, also called out The Witches