The Voice welcomed American Idol’s top talent on Monday as a special advisor.

Kelly Clarkson, 35, who was American Idol’s first-ever winner helped the judges with their singers during the Knockout round of the NBC singing competition show.

It created surreal scenes where the two women hugged and recalled their time on what was until recently The Voice’s top competition in musical talent shows.

Kelly’s appearance also was a taste of what is to come, with Kelly testing out the famous red swiveling coaching chairs and buzzers before joining full-time next season as a judge.

Kelly seemed to relish her role as an advisor rather than choosing competitors to send home, admitting at one point: ‘My season doesn’t start until next season so I don’t have to make the hard decisions!’

Jennifer hugged Kelly after telling her of her Idol win: ‘I remember watching you — that’s what made me want to go audition.’ 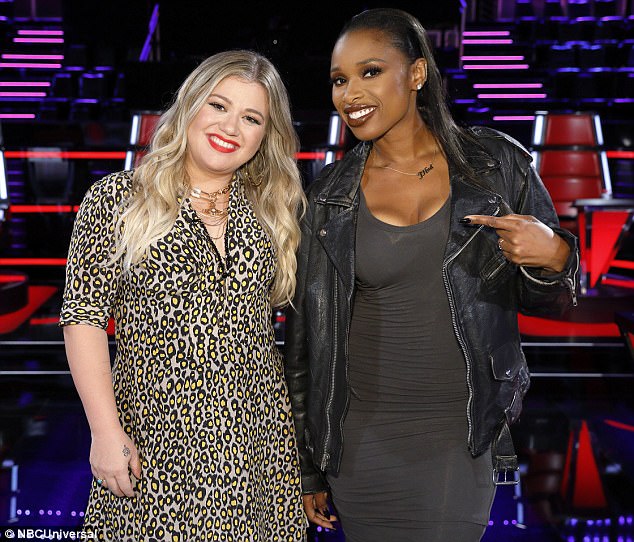 ‘Obviously, you’re the original. You can give the perspective of what it looks like when you do win.’

Kelly later gave props to season three finalist Jennifer after hearing her trade high notes in rehearsals with singer Davon Fleming — and sitting down rather than try to match them.

‘I can’t hang,’ Kelly admitted, laughing as she added: ‘I sat down. I was like — know your strength, know your place. I mean they’re so good.’ 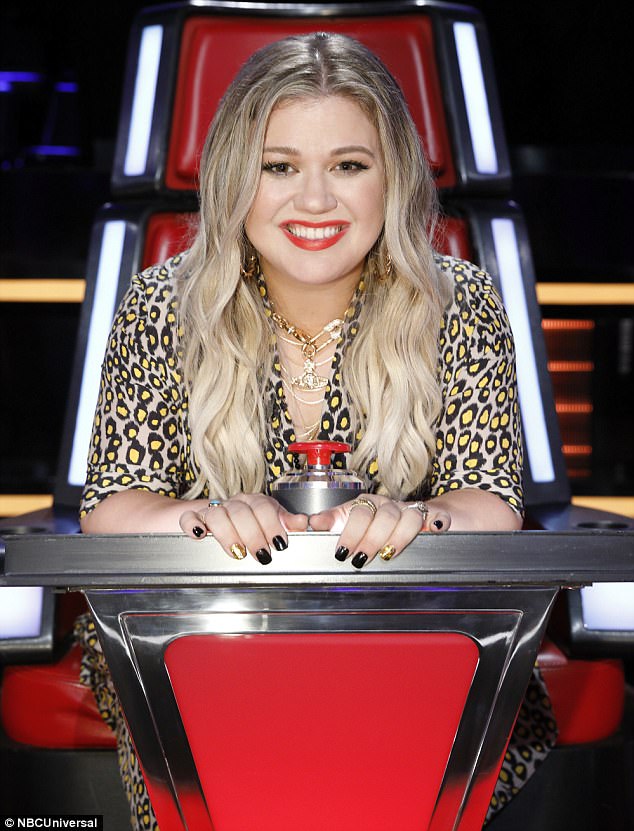 Fan favorite: Kelly was the first-ever winner of American Idol

The other coaches insisted they were equally thrilled to have Kelly there, with Blake Shelton saying: ‘This is literally the poster child of what can happen. It’s incredible the insight that Kelly has with what the artists are going through.’

‘Working with Kelly is so great,’ Miley Cyrus said. ‘We run into each other a lot at different gigs or award shows and I just know she’s a really good person with an incredibly great voice.’

Miley towered over her when they hugged — with Kelly shocked that they were actually almost the same height once the pop star took off her 70s-style platform shoes worn with flared white pants and red polka dot shirt with a huge collar. 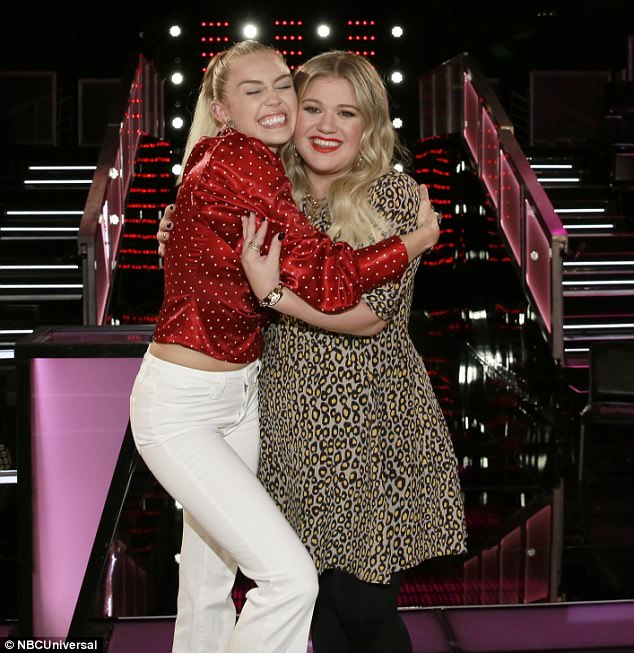 Big hug: Miley Cyrus towered over Kelly until she took off her platform heels

‘I love Kelly Clarkson. She really is the greatest person,’ Adam Levine insisted, telling her that he thinks she will win next season, with her asking: ‘Are you trying to jinx me?’

Kelly was not the only star to get some love — with Maroon 5 frontman Adam getting a hug and even a kiss from Blake.

The country singer had gone up against Jennifer in trying to steal Chloe Kohanski, expecting Adam to knock down his chances as part of their usual friendly feud. 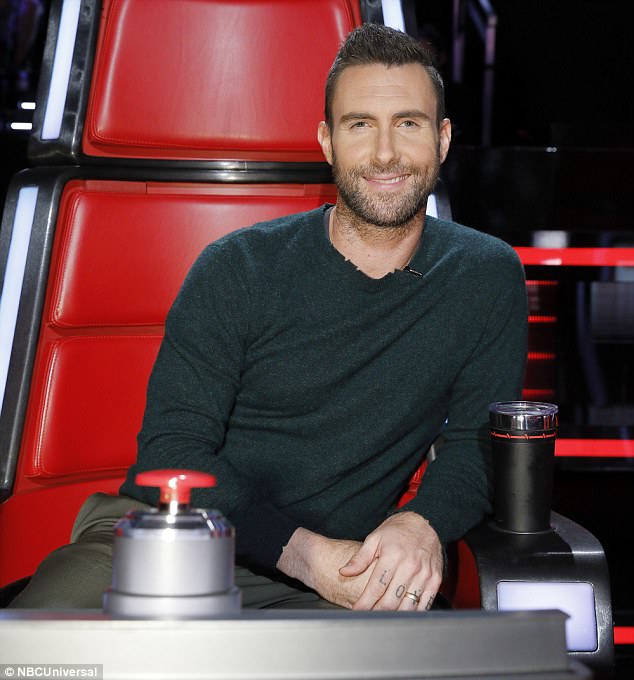 Rock star: Adam Levine got a hug and kiss from his show rival Blake Shelton

‘I don’t like Blake Shelton usually,’ Adam said — then shocking everyone by recommending Chloe go with him as he was making a ‘bold’ choice with her.

‘For the first time maybe in my life — and it makes me want to puke, there’s vomit coming up right now — I actually think that you guys will be great together,’ Adam said, with Blake going over for the hug.

Adam pulled away as Blake tried to kiss his neck. 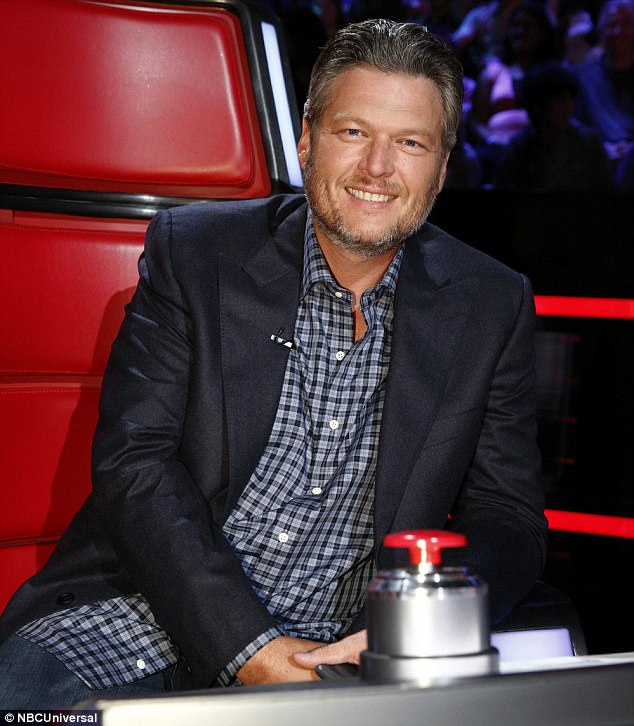 ‘I’m sorry you had to see that,’ Blake joked of their intimate moment.

Blake also capitalized when Jennifer predicted Chloe could win the show, telling her: ‘I’m glad that they keep saying that you could go on and win this show — because that’s what I specialize on in this show. I have wanted you on my team every single time that you have stepped foot on that stage.’

After beating Jennifer to the steal, Blake insisted: ‘The fact that Chloe was available for a steal is shocking to me. The only thing more shocking is that Adam actually campaigned for me.’ 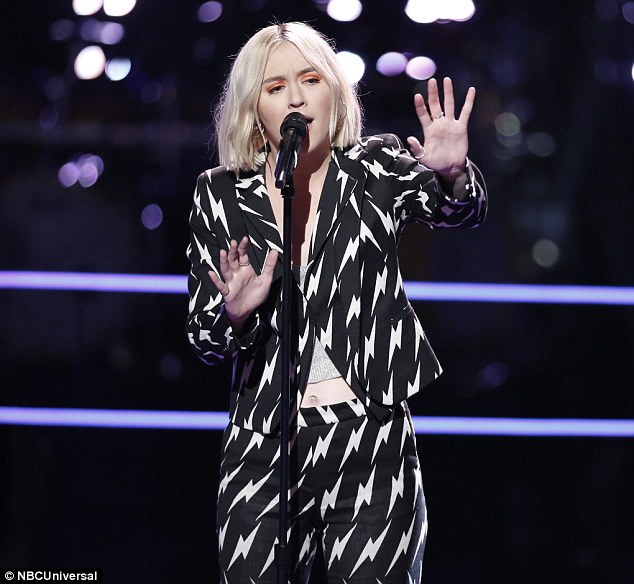 Chloe had initially been passed up by Miley who instead chose country singer Ashland Craft, predicting she could be ‘the female Chris Stapleton.’

Ashland, meanwhile, had been the most shocked to see Kelly in rehearsals, insisting: ‘Meeting Kelly Clarkson was the craziest thing that’s ever happened to me. We’re similar in a lot of ways. We’re both good ole country girls.’

Kelly seemed just excited after hearing her in rehearsals, telling her: ‘Girl you’re going to be a force in country music.’ 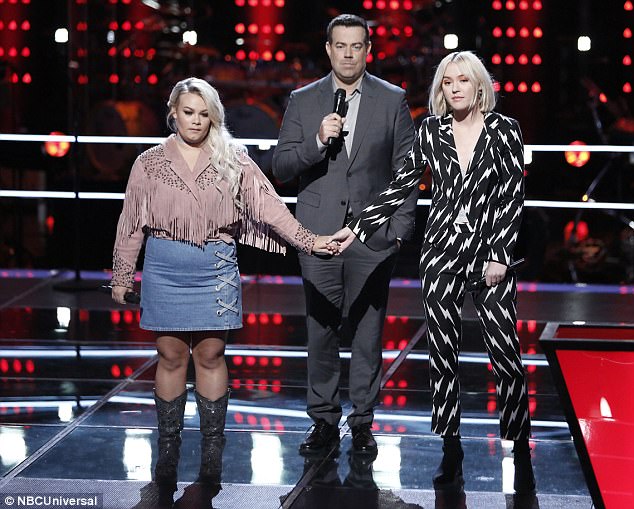 The moment: Carson Daly stood between Ashland and Chloe as they awaited their fate

The highest praise of the night came when Adam picked 16-year-old Addison Agen to go through — insisting: ‘Addison could save the world.’

After hearing her performance of Labrinth’s Beneath Your Beautiful, he seemed genuine when he said: ‘There’s so much going on in the world right now that’s so insane and perplexing, and for some reason when Addison is singing the way you do it kind of makes me feel like everything’s going to be OK. 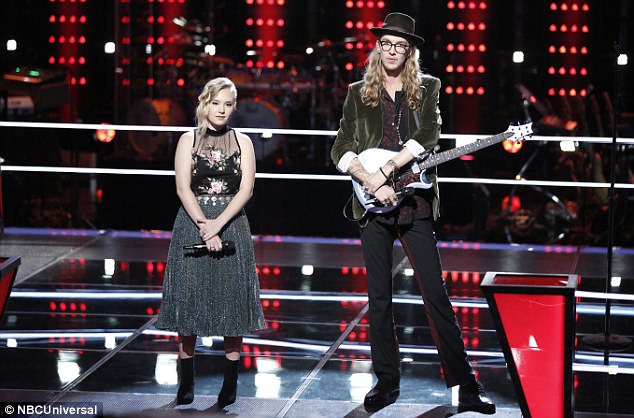 Tough call: Addison Agen and Dennis Drummond competed against each other

‘It’s a comfort I feel when I hear you sing which is special and I know that everyone in this room felt that,’ Adam told her.

Blake had also told her ‘You are one of my favorite vocalists in this competition. You’re so good.’

Addison said she was ‘overwhelmed, and thankful, and blessed’ to be picked to go through. 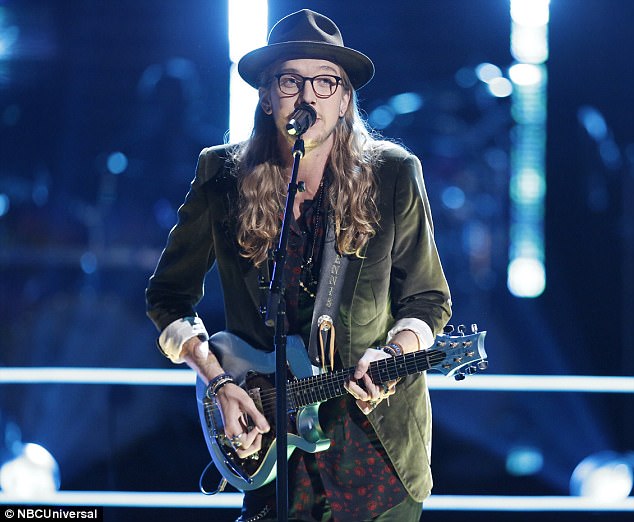 Tall singer: Dennis lost his Knockout round match against Addison

Afterward, Adam insisted to his fellow coaches: ‘That girl can win the whole thing — I’m talking Grammys and adoration. Her fans are gonna worship her.’

He picked her over Dennis Drummond following his version of Jimi Hendrix’s ‘guitar heavy’ version of All Along the Watchtower, with the coaches raving over his musicianship but Kelly reminding him the show was called ‘The Voice.’

It was also a great night for an even younger contestant, 15-year-old Shi’Ann Jones, who got picked by Jennifer over early favorite Lucas Holliday. 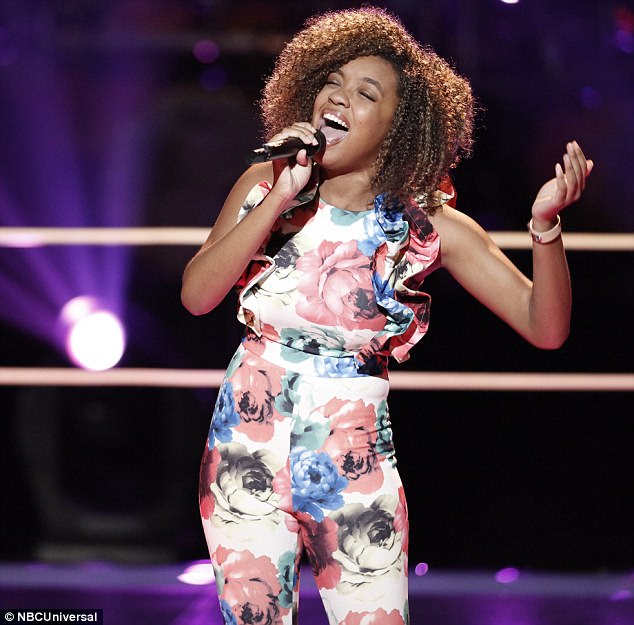 Kelly had raved about Lucas, saying during rehearsals: ‘Lucas is a great example of why I’m so excited to do blinds for my season. Lucas is that guy that you look at and you didn’t see that coming.’

But all the coaches leaned toward Shi’Ann after her version of Smokey Robinson’s Who’s Lovin You, and Jennifer saying: ‘She might be 15, but she knew what to get up here and say — and you sang it.’

Jennifer later said her young prodigy had ‘some Beyonce in her, some Mariah in her — she has some Jennifer in her! So everybody watch out.’ 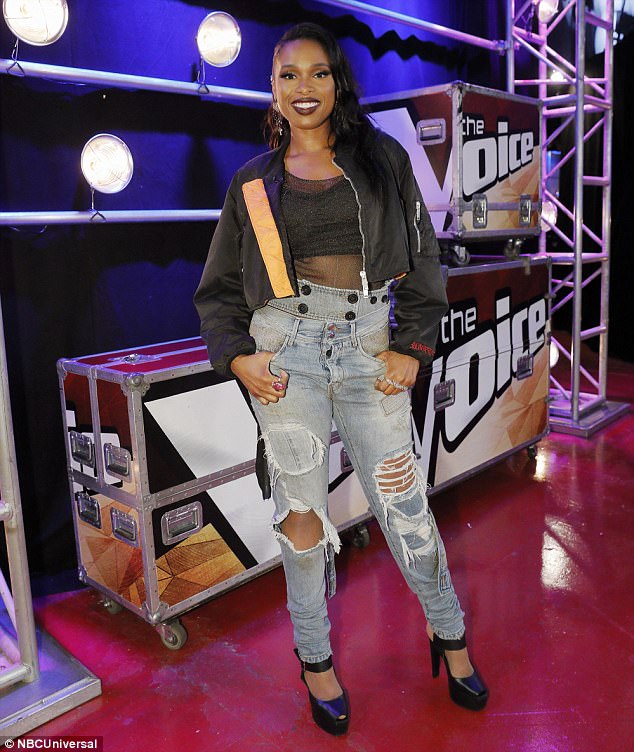 Blake said later: ‘I’m a big fan of Lucas and I hate to see him go, but Shi’Ann really stepped up to the plate.

‘She is a star, there’s no doubt about it,’ Blake added.

Adam, who had already used his one steal, had called Lucas ‘a freak,’ adding ‘And I only like freaks.’ 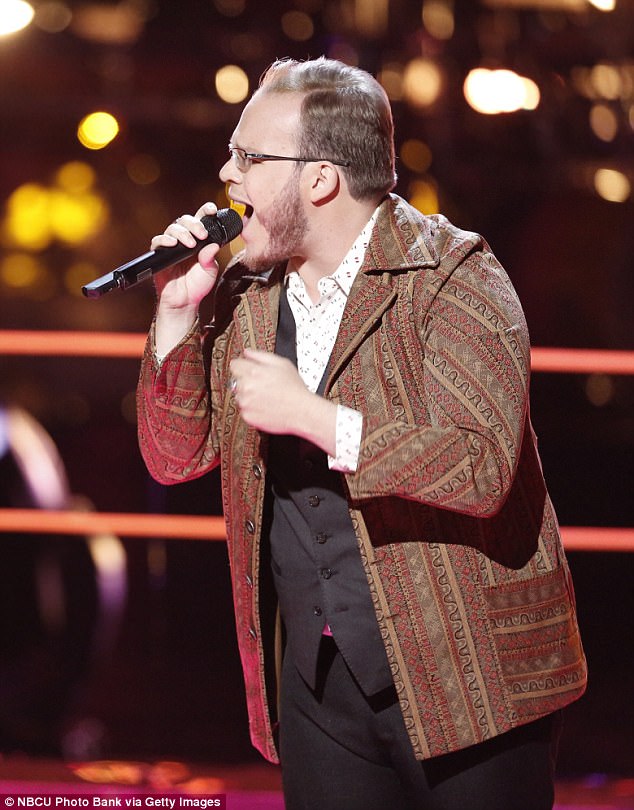 ‘Which is why he and I aren’t friends,’ Blake joked, with Adam insisting ‘Blake is a closet freak.’

There was also super high praise for Davon Fleming after his version of MercyMe’s gospel song I Can Only Imagine, with Adam insisting: ‘Davon, you’re ridiculous. It makes me feel bad about myself, actually. It’s just incredible what you do.’

Blake, meanwhile, joked: ‘Davon, I felt like I needed to hide my drink because I felt like I was at church. You transformed the room.’ 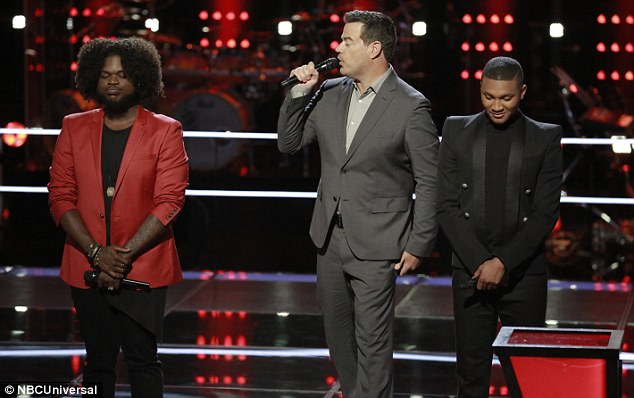 Moving on: Davon Fleming was named the winner over Eric Lyn

Jennifer ended up choosing him over Eric Lyn, who Adam had said sounded ‘like you should be performing in a bar in outer space.’

‘You’re just like this other creature — I feel like you could lift off and fly away,’ he told him.

‘Stay at it Eric,’ Blake told the rejected singer, who had told Jennifer: ‘You made me feel like I am supposed to do this for the rest of my life, and I am so grateful.’ 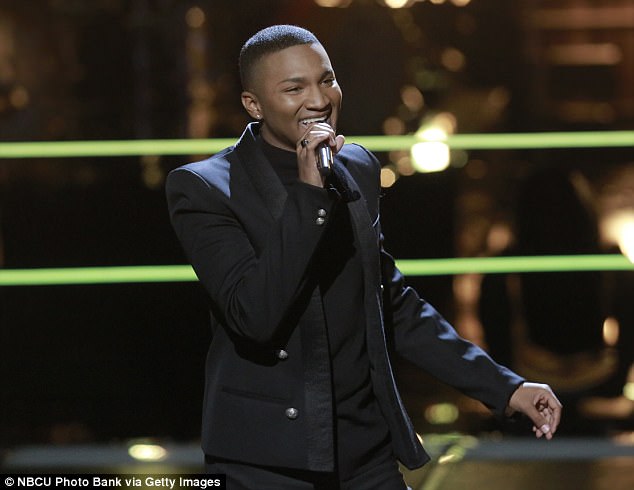 Jazz voice: Eric busted out some jazzy runs during his performance

Blake put his guys with ‘very emotional voices,’ Esera Tuaolo and Adam Cunningham, up against one another for his first knockout.

Esera, who said he lived in ‘darkness’ by playing in the NFL for nine years ‘as a closeted gay man,’ had gotten emotional in rehearsals as he admitted his mother is ‘not doing so well.

‘My mom was definitely my music inspiration — she taught me to sing, to play the ukulele. 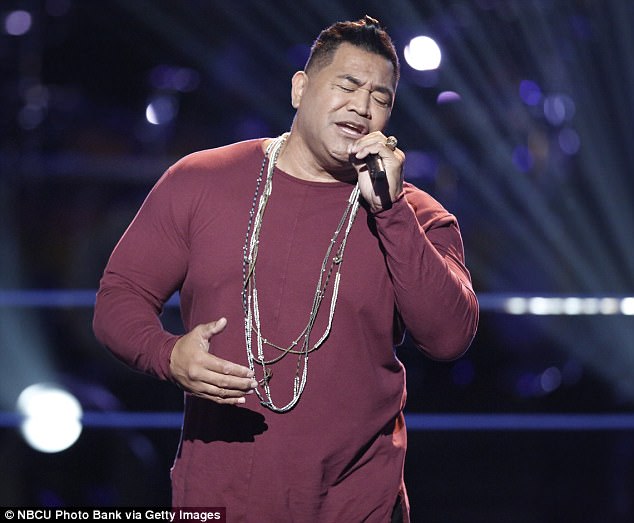 ‘I want to do this for my mom because I love her so much and I want her to know that all the things that she taught me growing up — it paid off,’ he said.

It proved true as he poured his emotions into a powerful performance of Luther Vandross’s version of The Carpenters’ classic Superstar, with Miley praising the ‘shock value’ of seeing such a big man sing that way, telling him: ‘I’ve built a lot on shock value.’

Adam Cunningham’s disappointment was short-lived, however, as Adam Levine buzzed to steal him, saying later: ‘Adam’s got a big country voice and I think he’s an amazing singer. And beating Blake with a country singer would be amazing.’ 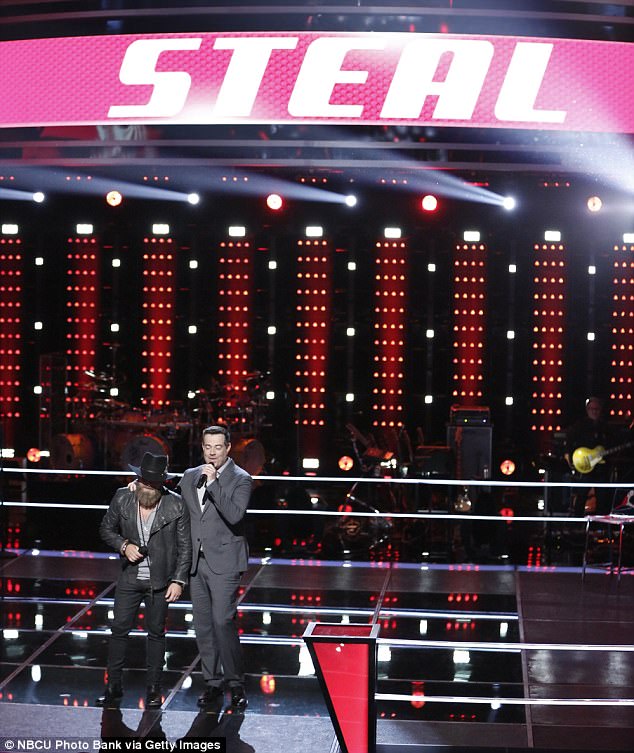 The steal: Adam Cunningham was stolen by Adam Levine

‘Adam did something good for the first time this season,’ Blake teased his nemesis.

Miley chose cancer survivor Janice Freeman over Karli Webster, with her fellow coaches agreeing that her powerhouse performance of the Mary J. Blige song I’m Going Down was a clear highlight.

‘Janice you almost made me throw my shoe, I just couldn’t get it off my foot,’ Jennifer joked, referring to her newfound way of showing admiration. 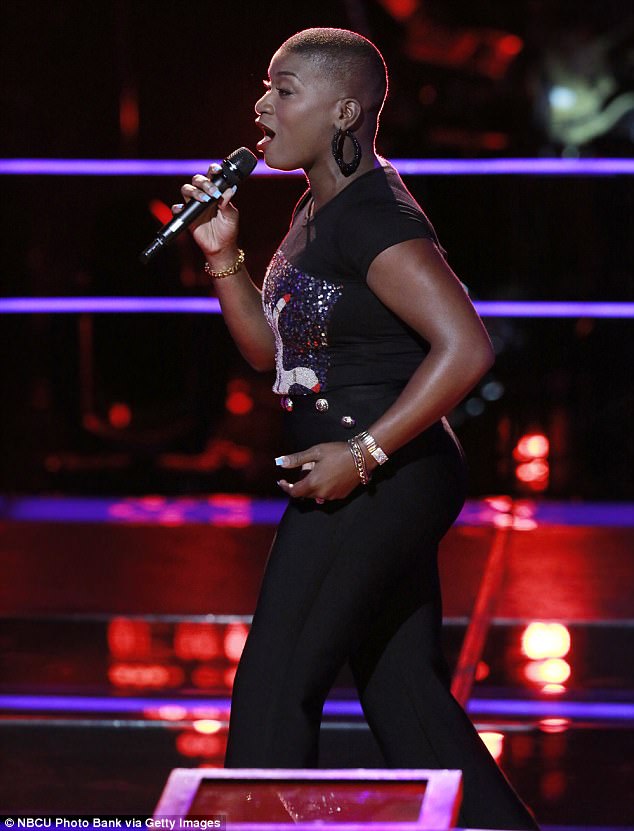 A force: Janice Freeman also advanced to the playoffs

‘Janice is a force. I was really blown away by her,’ Kelly also admitted during rehearsals.

Before leaving, an emotional Karli told Miley: ‘You’ve given me such an incredible, life-changing experience, I’m so grateful for it.’

The Voice continues Tuesday on NBC with more Knockout round performances. 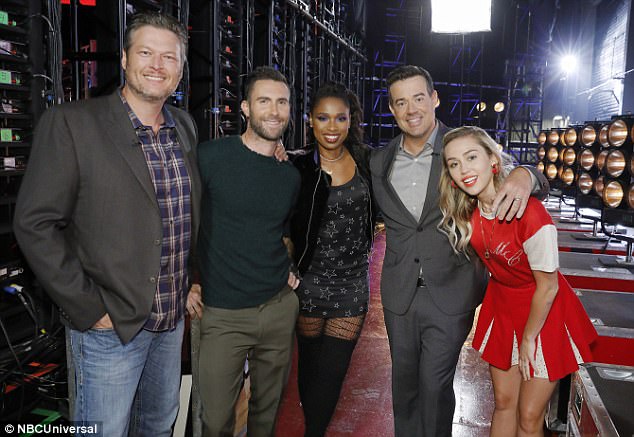 NBC show: Blake, Adam, Jennifer, Carson and Miley will be back Tuesday on NBC