The two University of Idaho students who survived the crazed knife attack that left four of their friends dead at their shared off-campus rental house are students Dylan Mortensen and Bethany Funke, DailyMail.com can reveal.

Young couple Xana Kernodle and Ethan Chapin, both 20, and best friends Madison Mogen and Kaylee Goncalves, both 21, all died in the savage slaying in the early hours of Sunday morning.

On Wednesday, police revealed both Dylan and Bethany were in the modest Moscow home at the time of the attack but miraculously survived the carnage.

Speaking to DailyMail.com, Idaho State Police spokesman Aaron Snell said the two survivors are helping police with their investigation but would not give further details of how they survived or whether either Dylan or Bethany called 911 later on Sunday morning.

He also told DailyMail.com the pair are not suspects but said every possibility is being looked at by the investigative team which now includes detectives from the Idaho State Police and the FBI as well as the Moscow Police Department. 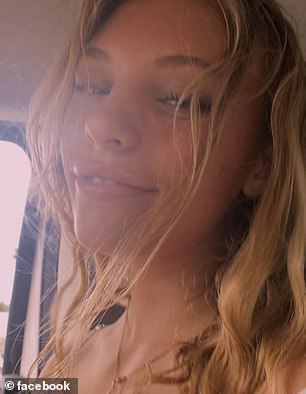 DailyMail.com can reveal the two roommates who escaped death while their four friends were knifed at their off-campus house are Bethany Funke (left) and Dylan Mortensen, (right) 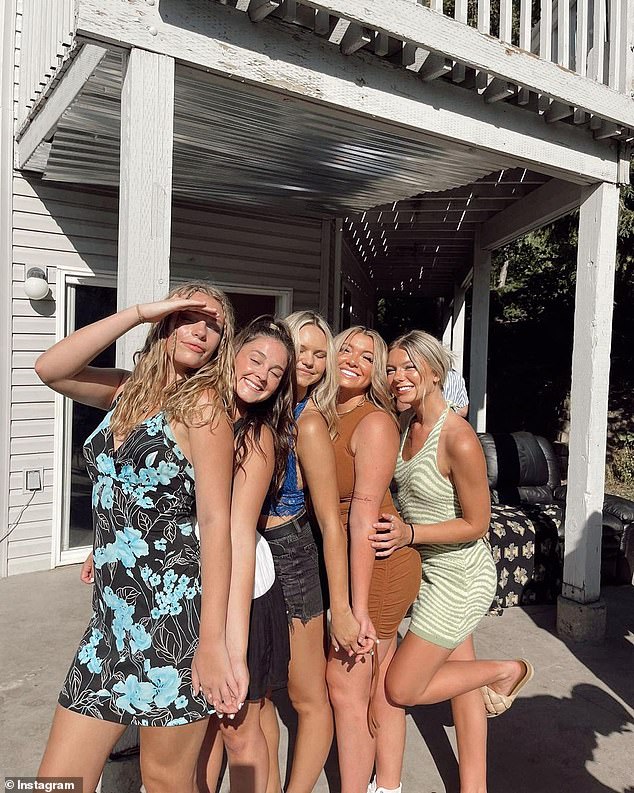 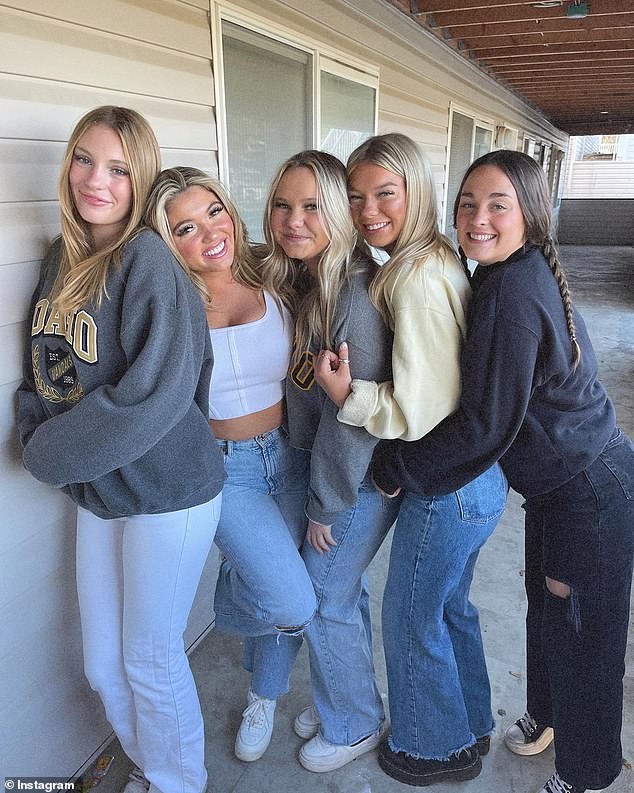 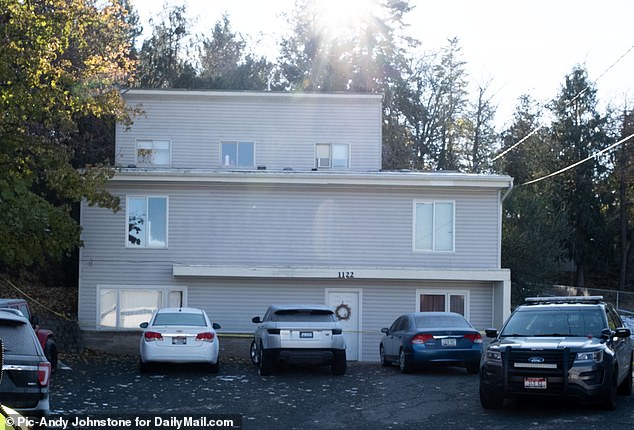 A neighbor in Moscow, Idaho, says the off-campus house where four students were killed Sunday was known to be a party house

Neither Dylan, 19, who is from Boise, Idaho, nor Bethany, a member of sorority Phi Beta Phi, have responded to messages from DailyMail.com and both have locked their social media profiles.

But both girls appear frequently on accounts that belonged to Madison and Kaylee – including a poignant Instagram post made by Madison on August 16 that shows all five girls together posing happily on the back porch of the home where three of them died on Sunday.

The two girls also appear in photos posted by Kaylee hours before she died which she captioned: ‘One lucky girl to be surrounded by these ppl every day’.

Another set of photos showing Dylan and Kaylee together was posted last Friday night and shows the pair dressed up for a night out. 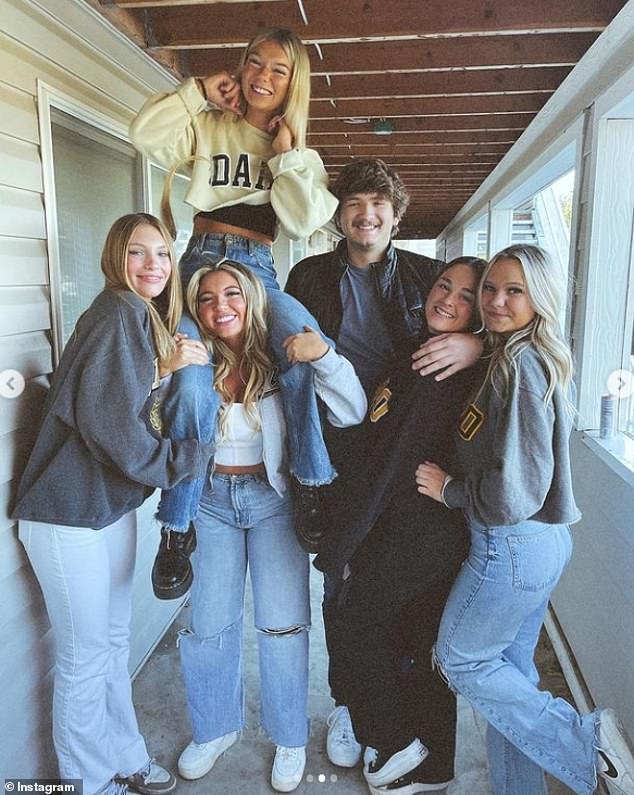 The six friends who lived in the house enjoyed an active social life that included nights out in Moscow and parties at their off-campus home, according to social media 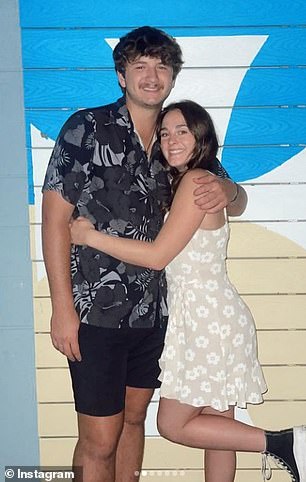 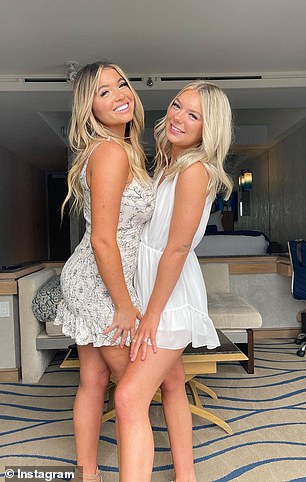 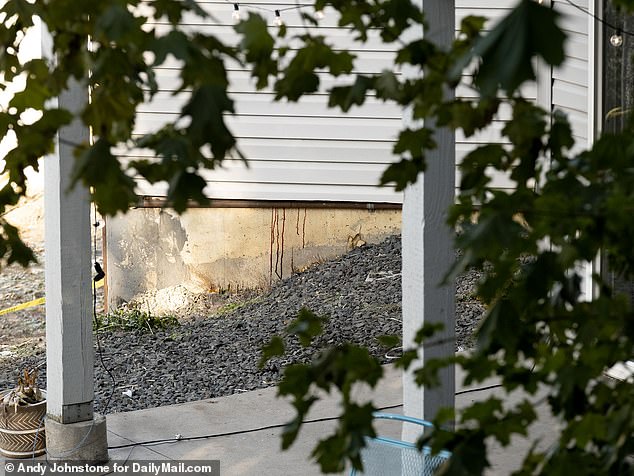 Blood drips down the outside of the wall of the house the four students shared. Investigators describe it as the worst crime scene they have ever seen 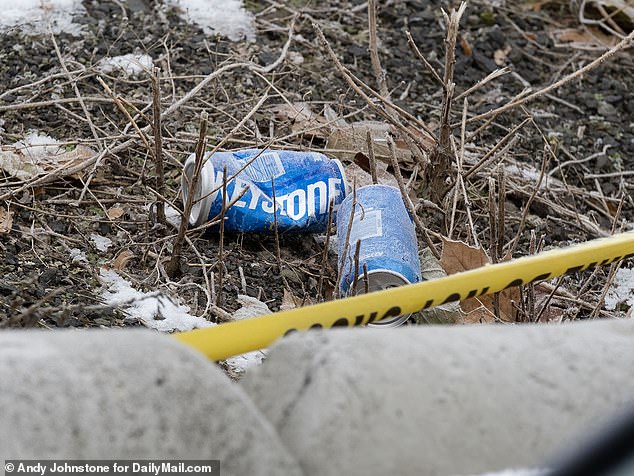 Outside the property, DailyMail.com saw trash left over from the home’s final parties 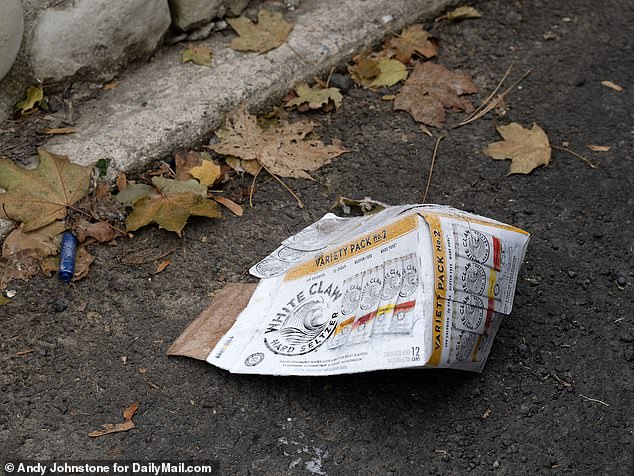 A similar collection of pictures was posted the same day by Madison – and show her cheerfully posing with both Bethany and Dylan.

Together with Xana, the quintet appeared to have enjoyed an active social life that included nights out in Moscow and parties at their off-campus home.

A neighbor who lives in an apartment block next door and asked not to be named said the property was notable for comings and goings – often late at night.

He said: ‘There’s always parties at that house and people going in and out and there’s usually some noise from there.

‘But I didn’t hear anything on Sunday morning – no screaming, no gunshots, nothing.’ 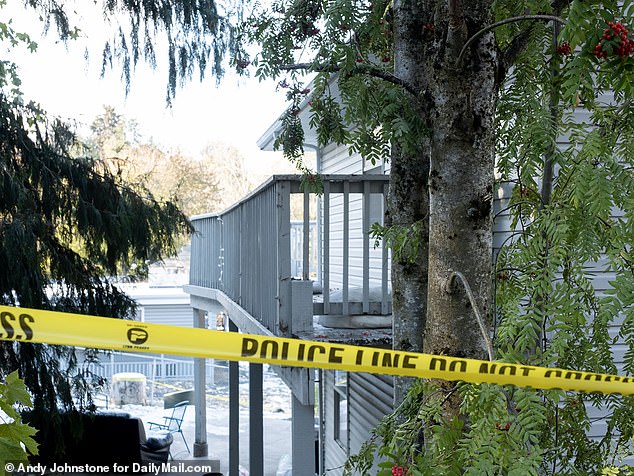 The murder scene home is on King Road in Moscow, a quiet cul de sac near the University of Idaho campus 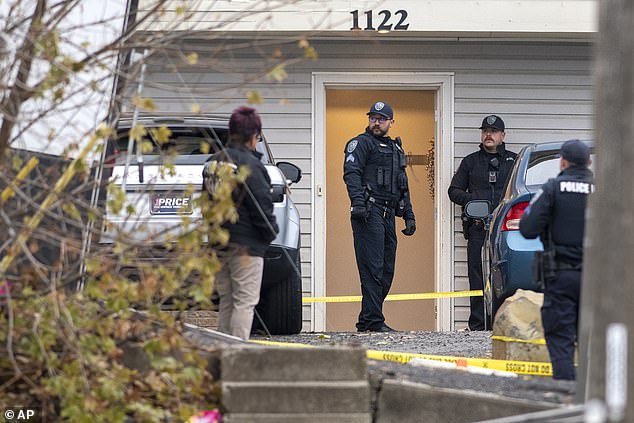 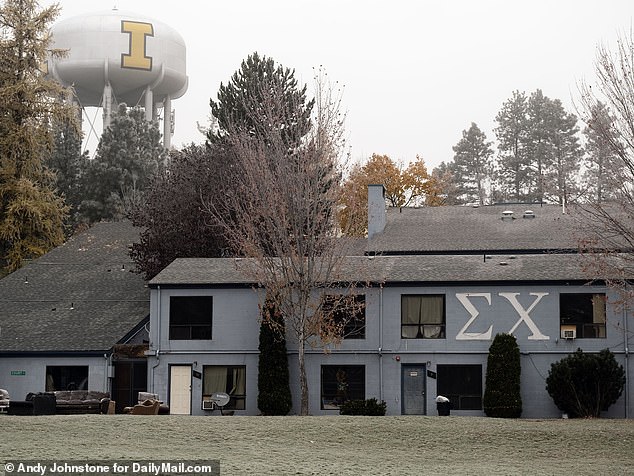 Outside the property, trash left over from the residents’ final parties could still be seen – among the debris beer cans and White Claw hard seltzer packaging.

Chapin, who spent his final night at a campus party with girlfriend Xana, was a regular visitor to the home but did not live there – instead residing at the Sigma Chi fraternity house around 100 yards away.

Kaylee and Madison spent their final night at a downtown Moscow bar, police said, and were captured on a Twitch livestream purchasing a portion of carbonara pasta from a food truck at approximately 1.45am on Sunday morning – just hours before they were murdered.

The creepy footage shows the pair talking to a group of men lingering behind them before setting off for the mile-long walk home.

Neither Dylan nor Bethany were with them and their movements on the night of the slayings remains unclear. 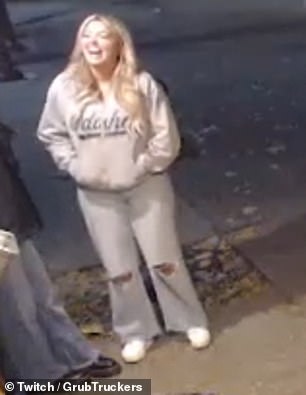 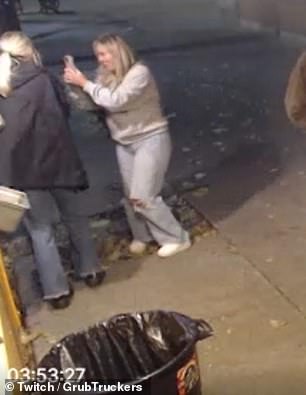 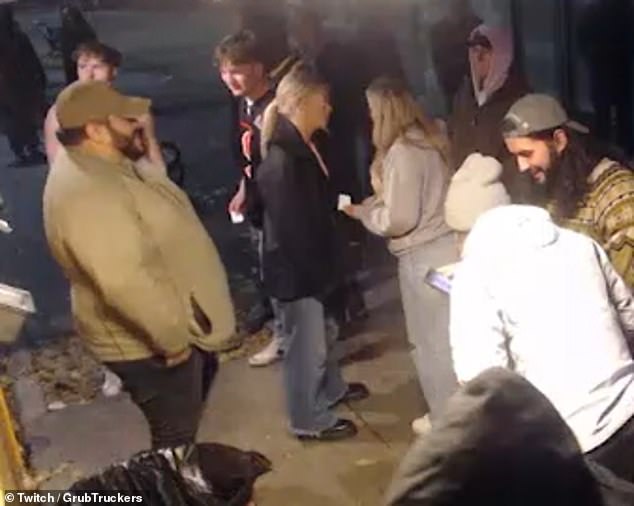 There were dozens of other youngsters waiting for food at the truck, which is parked outside a nightclub in downtown Moscow, Idaho, every Saturday between 10pm and 2.30am 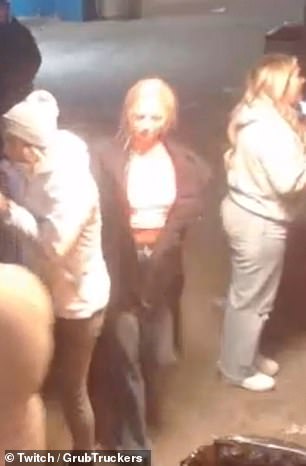 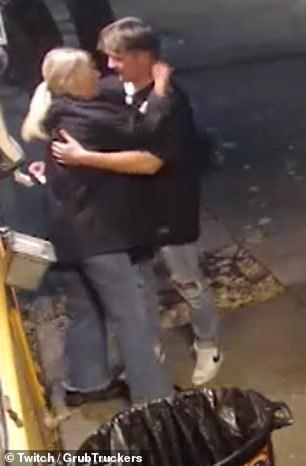 While Kaylee ordered, Madison spotted a friend and walked over to hug him warmly (right). She then returned to wait with Kaylee

Police said they are establishing a timeline of events – including the visit to the food truck – but were criticized by Latah County Prosecutor Bill Thompson who said cops’ insistence the community is safe is at odds with the statements released.

He told CBS: ‘Obviously there’s no way police can say there’s no risk but what they’re seeing indicates that there’s not a risk this person will randomly attack people.’

He added: ‘I don’t think they’re going to foreclose the possibility that it could be one or more people but right now they don’t know who is responsible.’

Discussing the food truck footage, Thompson added: ‘They’re in the process of identifying the other people who were there and what sort of contact did they have.’

Mogen, Goncalves, Kernodle and Chapin died in the early hours of Sunday morning and were found around 11:30am by a friend – possibly Dylan or Bethany. 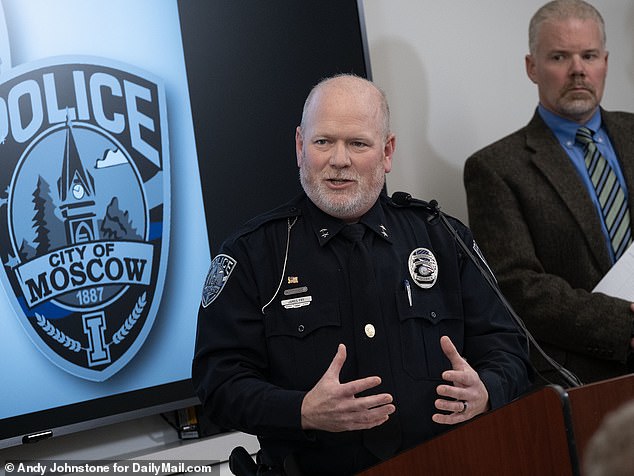 Moscow Police Chief James Fry told the media Wednesday: ‘There is still someone out there who committed four horrible, horrible crimes’ 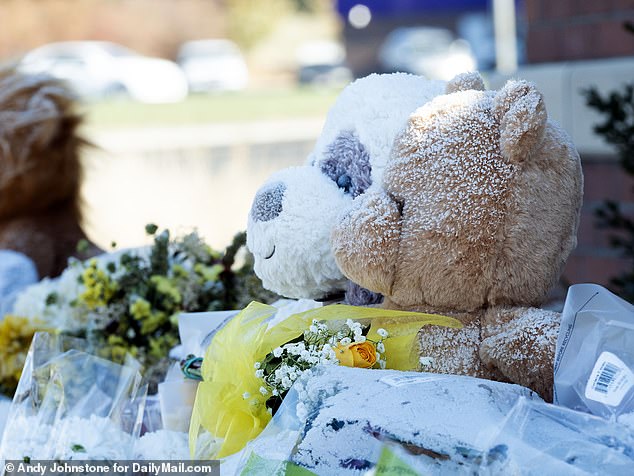 On Tuesday, DailyMail.com revealed that police on the scene described it as ‘one of the worst’ they’ve ever seen, and blood could be seen oozing through the wall on the second floor of the home.

Exclusive DailyMail.com photos show blood dribbling down the side of the house while evidence markers could be seen on the interior walls and back porch.

On Tuesday, police were seen collecting the contents of trash cans close to the home as part of the search for the ‘edged weapon’ they believe was used in the killings.

The trash was taken to a local garbage depot where hazmat-suited cops were seen sifting through garbage bags in a screened-off shed.