EXPRESS INFORMER > News & Politics > The thorny perils of gardening: A pricked thumb, rashes… and even poisoning!

A thorn in the finger is an everyday injury for most gardeners — and for tree surgeon Lindsay MacPherson it’s more routine than most.

So when he snagged his finger on a blackthorn tree he was chopping, he naturally thought little of it.

But that little thorn caused an infection that left him in hospital for ten days, and at risk of organ failure.

‘I thought nothing of it, as I was always getting minor injuries.’

The thorn embedded in the middle finger of his right hand and, although he tried to pull it out, a tiny part remained.

When his finger began to throb two days later, he visited a minor injuries unit, but deterred by a ‘monster queue’, he instead consulted a friend, an ex-nurse, who cleaned the injury.

‘I thought that was that,’ explains Lindsay, who lives with his wife Rosie, 47, and their three children in Abergele, North Wales.

When his finger began to throb two days later, he visited a minor injuries unit, but deterred by a ‘monster queue’, he instead consulted a friend, an ex-nurse, who cleaned the injury

But, five days later, during a long car journey with another friend, he began to feel extremely unwell.

‘My left elbow was really painful and my right hand was swelling up; I was going in and out of consciousness,’ he recalls.

The concerned friend took him to the nearest hospital, in Abergavenny, where blood tests revealed that Lindsay had developed life-threatening sepsis, caused by bacteria that entered his body via the thorn.

He was immediately rushed into the operating theatre for surgery to clean the infection in his hand and elbow.

This was to flush and scrape out the elbow joint where the infection had set in. Debris was removed and doctors stitched up his the wounds.

Sepsis is a life-threatening condition that occurs when your immune system overreacts to any kind of infection.

Symptoms include slurred speech or confusion, a cough, extreme shivering, passing no urine during the day, mottled or discoloured skin and feeling extremely unwell.

It can progress rapidly, causing a catastrophic drop in blood pressure and organ failure — every year sepsis claims the lives of 52,000 Britons, according to the UK Sepsis Trust.

He explains that scratches to the skin account for 10 per cent of all sepsis cases, and this can result from something as simple as ‘a gardener scratching themselves on a rose thorn’.

The infection might not be caused by the thorn itself, Dr Daniels says, but rather by the gardener coming into contact with soil containing bacteria such as E. coli or Listeria, which enter the bloodstream via the cut.

Dr Daniels says that although it’s easy to dismiss a minor gardening injury, ‘if you feel any of the symptoms of sepsis, call 999 — it is a medical emergency’.

Luckily for Lindsay, after ten days on powerful intravenous antibiotics, he was discharged from hospital. But it was four months before he could work full-time and 12 months before he was completely recovered.

Even then, he still suffered from fatigue, confusion, headaches and long-term immune system problems, which means he is more susceptible to coughs and colds.

Now Lindsay always wears gloves when he is gardening, and he encourages others to do the same.

‘Gloves would have stopped this from happening,’ he says. ‘That tiny blackthorn could have killed me.’

While gardening has certainly been a godsend for many during the many months of lockdown, Lindsay’s story is a cautionary tale of the possible hazards that can be involved.

Indeed, the Royal Society for the Prevention of Accidents (RoSPA) says 300,000 people are hurt in their gardens every year, seriously enough to need hospital treatment — with the most common accidents being caused while using lawnmowers, hedge trimmers and secateurs.

There are, in fact, several health complaints that can arise from a spell in the garden.

In 2018, a German study, published in the Journal of the European Academy of Dermatology and Venereology, found keratinocyte cancers (a type of skin cancer) in 20 per cent of professional gardeners.

As well as stings and bites, here are some of the other gardening hazards — and how you can avoid them…

Some of our best-loved blooms contain compounds that can irritate the skin and eyes — for instance, hyacinth bulbs can cause itching and inflammation when handled.

Skin reactions caused by plants — known as phytodermatitis — can even occur without direct contact with a plant, warns Dr Sweta Rai, a dermatologist based in London and spokesperson for the British Association of Dermatologists.

‘For example, if you have some sap from a plant on your clothes, and that then touches your skin, it can cause a rash,’ Dr Rai adds.

Plant dermatitis usually results in an itchy, red rash, which may also blister in more severe cases. This usually appears shortly after contact but may take up to 48 hours to develop.

In some situations, a rash will only appear if the skin is exposed to sunlight at the same time as coming into contact with certain plants — such as those from the citrus and legume families, as well as carrots, parsnips, celery and chrysanthemums — a process known as phytophotodermatitis. 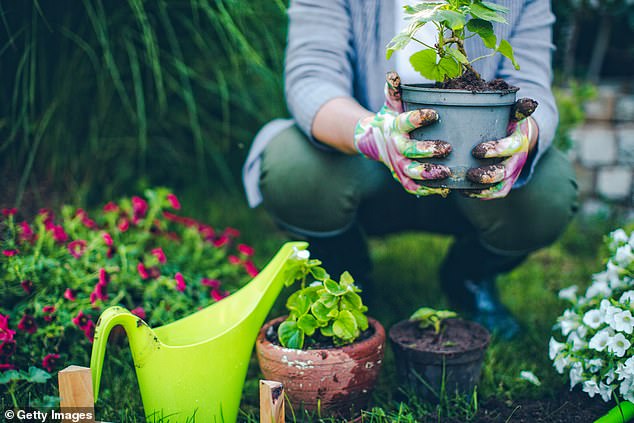 Some of our best-loved blooms contain compounds that can irritate the skin and eyes — for instance, hyacinth bulbs can cause itching and inflammation when handled [File photo]

This reaction can lead to intense redness, followed by large blisters. Some people may also go on to develop secondary infections from the blisters.

But plants are not the only cause. Dr Rai says: ‘Insecticides may cause allergic-contact dermatitis in some people, if they come into contact with the skin, causing sensitisation of the skin. This may lead to redness, itching, swelling and blistering.’

Sunlight itself can also cause a pink, itchy rash — photodermatoses — at exposed sites, although this often disappears as your skin gets used to sunlight. If the reaction is prolonged or uncomfortable, consult a dermatologist.

Wearing gloves, washing your hands after gardening and wearing a sunscreen with an SPF of at least 30 will all help protect you against rashes or other reactions.

Amir Qureshi, a consultant knee surgeon and limb reconstruction specialist at University Hospital Southampton, has seen many gardening injuries during his career, ‘including someone who accidentally sliced off the tips of his fingers while cleaning the blades of a lawnmower with the power still running’.

‘They’re not usually caused by gardening, but exacerbated by it. People with arthritic joints sometimes kneel to garden and then get inflammation.’

He advises anyone who spends a long time tending to plants in one position to stretch regularly — every 20 minutes or so — and, obviously, to use a kneeling pad.

As well as the more common wasp, bee and hornet stings, bites from ticks can also be an issue for some gardeners. Ticks are most commonly found in grassy and woody areas.

‘Their bites can cause long-term problems, such as Lyme disease, which can result in significant neurological and cardiovascular problems, if left undiagnosed,’ says Dr Rai.

‘If you have a tick bite and develop a red, circular rash, see your doctor,’ she says.

A tick will usually attach itself to a lower limb, says Dr Lynn Thomas, medical director at St John Ambulance. You may feel an itch, then see a raised grey ‘bubble’ on your body. This will turn red as the tick sucks blood.

‘Do not pull the tick off as you may leave part of it in your leg,’ advises Dr Thomas.

‘If you have an animal tick removing kit, you can use that. If not, get a pair of pointy tweezers and pull the tick out carefully, as close as possible to the skin to ensure you get the head, too. In some cases, ticks can transmit Lyme disease. If the area remains red after a few days, seek medical advice.’

According to Public Health England, around ten per cent of ticks carry the bacteria that causes Lyme disease.

A report in the journal BMJ Open in 2019, said the annual number of cases of tick-borne Lyme disease in the UK may be around 8,000 — three times higher than previous estimates.

If you are concerned about the possible presence of ticks in your garden, then covering the skin, including tucking trousers into socks, and using an insect repellent containing the chemical DEET will help reduce the risk of a bite, advises Dr Rai.

As for other insect bites and stings, Dr Rai says: ‘You should remove any sting from the skin and clean the area with soap. Once done, you can apply ice to the site and elevate it.’

However, she advises that if you have a sting or bite around the eyes, mouth or throat, or if a large patch becomes inflamed, you should see your doctor.

Garden chemicals are a danger, too — particularly for children. NHS Digital figures show there were 129 hospital admissions for pesticide poisonings in 2018/19, over half among under fives.

RoSPA says: ‘Chemicals should be locked away, out of reach in a garden shed or garage, and never decanted into old drink bottles.

‘Families with young children may want to check that there are no poisonous plants or berries in the garden. If you are concerned about poisoning, seek immediate medical attention. Call 999 or 111.’

How to get the most out of food choices. This week: Strawberries

A portion of this meringue and fruit dessert has around 500 calories (a quarter of the daily limit for a woman), along with the maximum saturated fat (20g for a woman), and about 80 per cent of the daily added sugar limit, which contributes to tooth decay, obesity and type 2 diabetes. 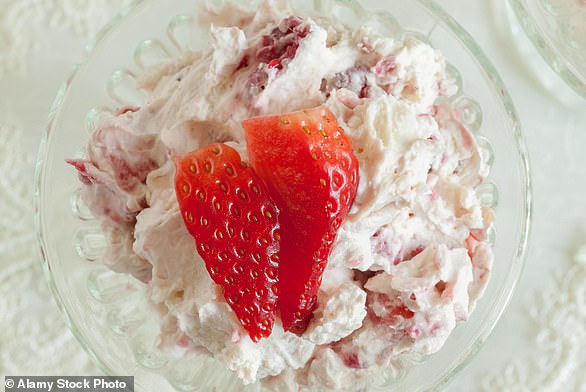 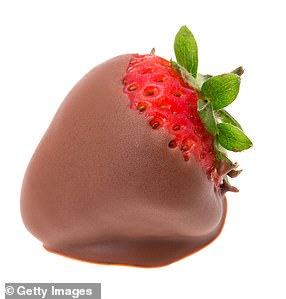 Eight strawberries (one of your five-a-day) dipped in 20g dark chocolate have 142 calories and 5g saturated fat (a quarter of your daily limit).

The vitamin C in the strawberries synergises with polyphenols in dark chocolate, which protect against cell damage that can cause heart disease and cancer.

100g of strawberries with 100g of 5 per cent fat Greek yoghurt contains 125 calories, no added sugar and a modest 3.6g saturated fat (18 per cent of your daily limit). 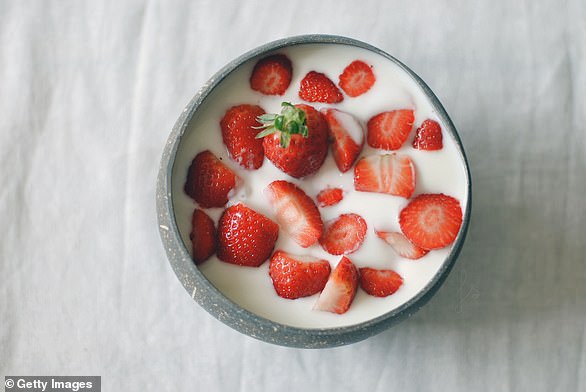