There’s nothing quite like a trip to a Christmas market to get you in the yuletide spirit.

Germany has been at the forefront of the modern festive phenomenon but other places – in the UK and beyond – are fast catching up.

The market in Tallinn’s beautiful Raekoja Plats (Town Hall Square) opens in mid- November until the first week of January.

For food, expect sauerkraut and sausages, served with glasses of glögg — sweet, hot wine. Tallinn has a delightful medieval centre.

Where to stay: Hotel Telegraaf is in the heart of the Old Town with smart rooms from £130 B&B (telegraafhotel.com).

Riga, the capital of Latvia, is a lovely city with a mish-mash of styles from medieval to Baroque. Its Christmas market in Dome Square runs from late November to early January and is small and alluring.

As well as candles and carved-wood handicrafts, there are all sorts of goodies to devour: gingerbread, huge cuts of pork cooked on open fires, and hot wine.

Where to stay: Neiburgs is a stylish family-owned hotel in the Old Town with doubles from £100 (neiburgs.com).

Vilnius on the cheap 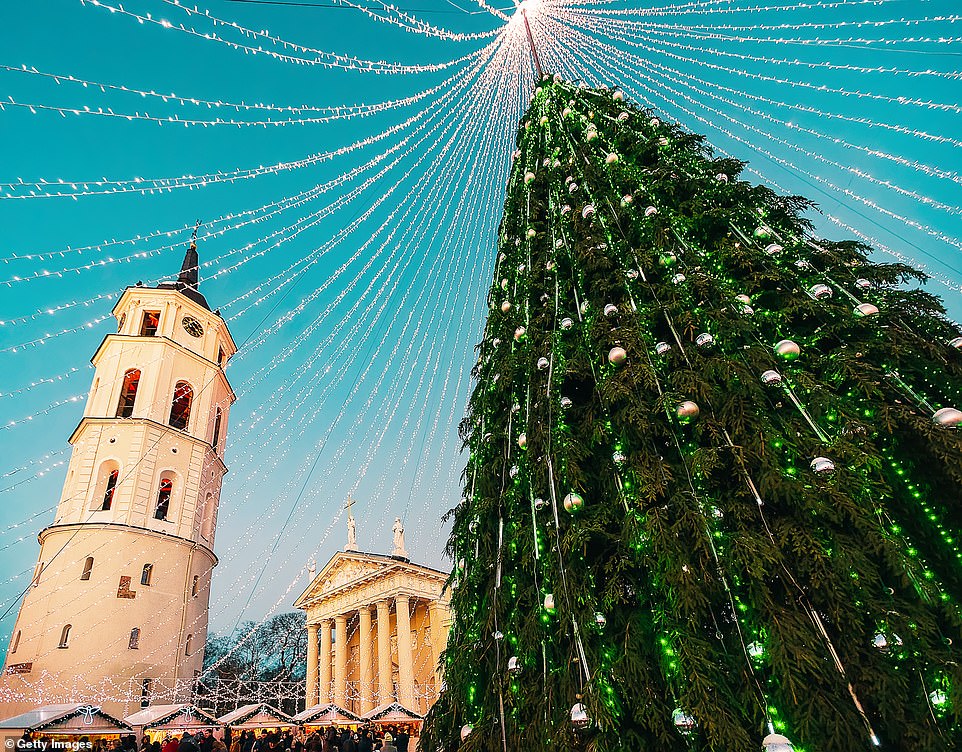 Vilnius has a busy Christmas market, which is in the main square with chalets doing a roaring trade in amber and tree decorations

The lights twinkle in the Lithuanian capital at its busy Christmas market, which is in the main square with chalets doing a roaring trade in amber and tree decorations.

Enjoy the smells of roasted almonds and pick up honey-flavoured cakes, cheeses, sweets, pastries and gingerbread. Santa Claus, elves and the Three Wise Men are usually in attendance for photos.

The markets are simple and authentic, run by local traders, with reasonable prices and delicious hot wine. Also check out the open-air art gallery on Literatu Gatve.

Where to stay: Mabre Residence Hotel has comfortable rooms and a pool by a sauna; B&B doubles from £66 (mabre.lt).

More than 160 stalls are spread across Barfüsserplatz and Münsterplatz in the centre of Basel, home to one of the oldest Christmas markets in Switzerland, running from November 28 to December 23.

Handmade toys, jewellery, ceramics and handicrafts are for sale, while activities for children include candle-dipping and roasting schlangenbrot (snake bread) over open fires — so named because dough is wound round a stick for cooking and looks snake-like.

Where to stay: Hotel Krafft offers elegant doubles from about £180 (krafftbasel.ch). 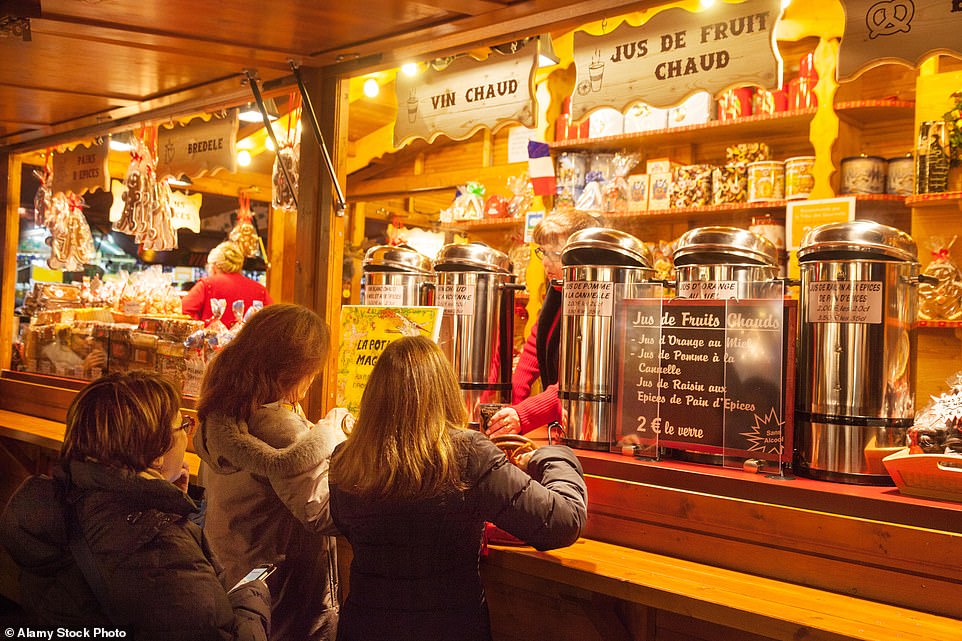 Age-old tradition: There has been a Christmas market in Strasbourg in north-eastern France since 1570

There has been a Christmas market in Strasbourg in north-eastern France since 1570.

This year’s runs from November 22 to December 30 comprising more than 300 wooden chalet-style stalls celebrating food and wine from the Alsace region and selling Christmas gifts including wooden toys, jewellery and perfume.

Stalls are set up around the cathedral and at a dozen other sites. A superb 30-metre-tall Christmas tree towers over Place Kléber. Special concerts and exhibitions are organised.

The official name is Christkindelsmärik, which translates as ‘Market of the Christ Child’. It attracts about two million visitors each year.

Where to stay: BOMA hotel has a hip cocktail bar and colourful, comfortable doubles from about £163 (boma-hotel.com). 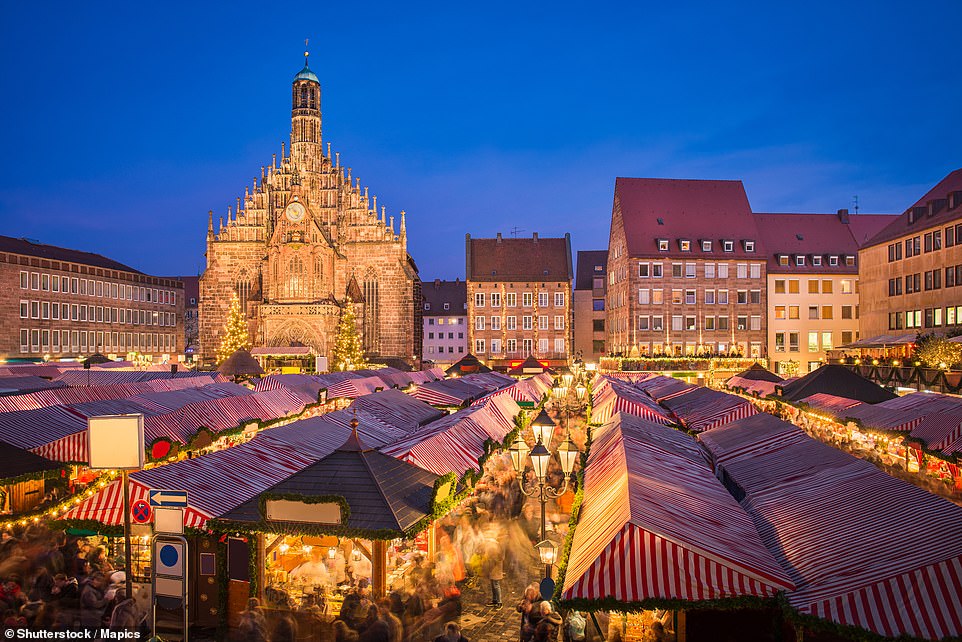 Nuremberg’s market, which dates from 1530 and is known as Christkindlesmarkt, is one of the most popular in Germany with more than 180 stalls lit up with fairy lights.

There’s plenty of festive cheer with beer, mulled wine and rum punch, while the delicious smells of gingerbread, bratwurst and roasted almonds fill the air. It begins on November 29 and runs until Christmas Eve.

Children will enjoy the carousels and mini Ferris wheel.

Where to stay: Hotel Deutscher Kaiser is in the city centre with stylish rooms with modern art; doubles from £197 (deutscher-kaiser-hotel.de). 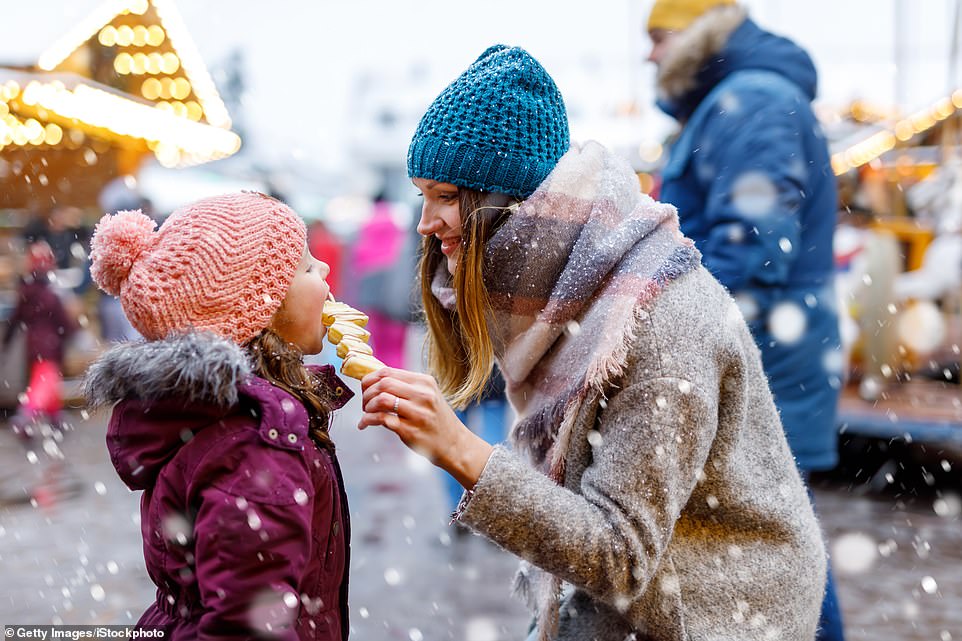 Believed to be Europe’s oldest Christmas market, Vienna’s was established by Albrecht I, who granted the privilege of holding a Krippenmarkt, ‘December Market’ in 1298

Believed to be Europe’s oldest Christmas market, Vienna’s was established by Albrecht I, who granted the privilege of holding a Krippenmarkt, ‘December Market’ in 1298.

This year’s runs from November 15 to Boxing Day, with 20 Advent markets dotted about the city. Expect carol singing, stalls for learning to make candles and cookies, a huge ice rink, carousels and a children’s ‘reindeer train’ railway.

Where to stay: Hotel Rathaus Wein is a hip hotel with arty double rooms from £136 (hotel-rathaus-wien.at).

There’s a massive ice rink with an adjoining bar as well as a Ferris wheel with heated gondolas. Try spekpatatjes (fried potatoes with bacon) or waffles with a mug of hot chocolate or glass of glühwein.

Where to stay: Hotel Les Nuits, a design hotel in the city centre, has cosy doubles from £120 (hotellesnuits.be).

More than 150 wooden ‘chalet’ stalls will line the Georgian streets in Bath during its popular Christmas market, which begins on November 28 and runs until December 15.

Handmade jewellery, original art, Christmas decorations, scarves, ponchos, toys and much else will help fill stockings. Hog roasts and burgers will keep meat eaters happy, while there will also be a dedicated vegan food chalet this year, too.

Where to stay: Dorian House has elegant B&B doubles from £120 (dorianhouse.co.uk). 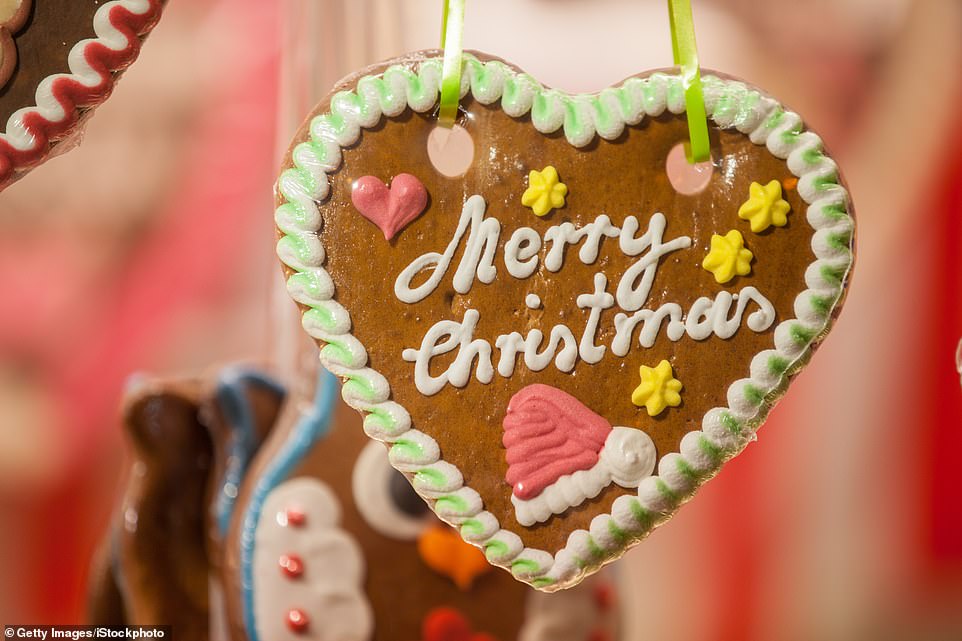 Manchester’s Christmas market started yesterday and will be open until December 21 with more than 300 wooden stalls to tempt you.

If you’re looking for gifts, there’s plenty to choose from including everything from bonsai trees to Belgian kitchenware, leather bags and amber jewellery.

Albert Square will be at the heart of the action.

Other market sites will be at Exchange Square, New Cathedral Street, King Street and St Ann’s Square. An ice rink and ice sculptures will feature in the Ice Village.

Where to stay: Hotel Indigo has comfortable modern double rooms from £112 (hotelindigo.com).

They’re taking off like never before. So popular are Christmas Markets that one small German town — Velen, near Germany’s Dutch border — had to beg people to stop coming last year as so many were visiting to soak up the festive cheer.

Low-cost airlines make it easier than ever, while Jet2.com is now offering cut-price packages to market cities throughout Europe with Strasbourg, Vienna and Prague among the best sellers. Christmas markets normally run from late November until the New Year.

The first such market was known as a ‘December Market,’ which began in Vienna in 1298, with the concept taking off in Munich in 1310, and spreading across Germanic-speaking countries during the Middle Ages.

There have, however, been markets during Advent as far back as the 11th century. Germany has been at the forefront of the modern festive phenomenon. Last year, the country hosted more than 1,400 Christmas markets, attracting no fewer than 85 million visitors.

But other countries are fast catching up. Here in the UK, there are now more than 100 markets, proving a huge draw for both locals and tourists, with some of the most popular in cities such as Bath and Manchester. 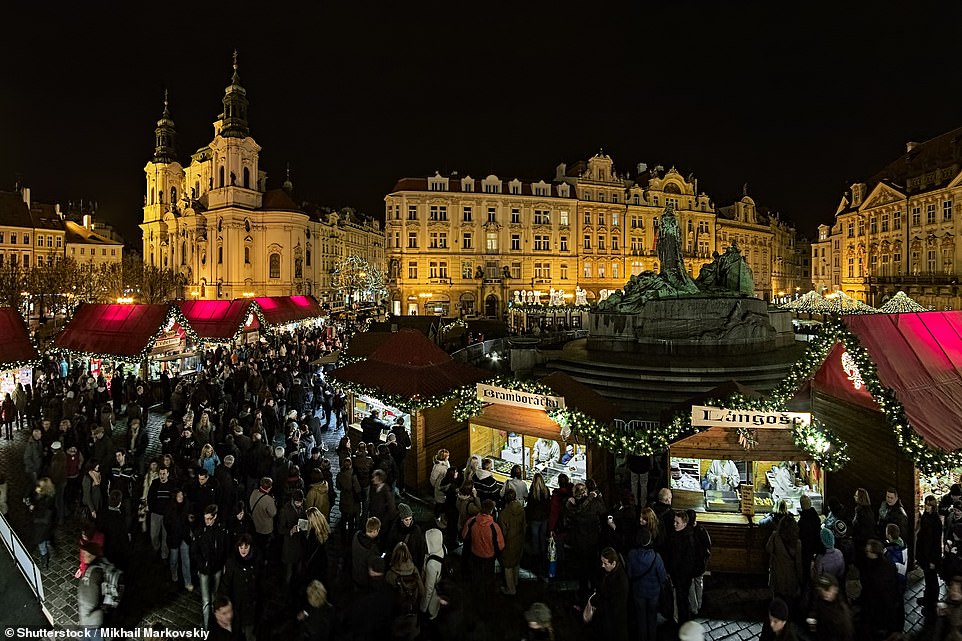 Last December, I tried out one of the European biggies — Prague — to revel in the glittering winter cheer and pick up a present or two.

The Czech Republic’s medieval capital is transformed into the epitome of yuletide fun and frivolity in the run-up to Christmas, with festive songs played on a loop and every shop festooned with baubles and lights. The whole city seems to get in the mood, with no fewer than three Christmas markets, the largest in the Old Town Square. Wandering the streets at night is a joy, as you are plied with Svarak — a special spicy hot wine — and stalls at every corner offer hog roasts, sausages and chestnuts roasted on an open fire.

The highlight is the food and drink. Prague has lovely cafes with outdoor tables and chairs, where you sit warmed by sheepskin rugs, blankets and patio heaters.

It was heaving during our three-day visit — crossing Charles Bridge called for sharp elbows — but it was possible to wander off the beaten track and breathe in the romanticism of this beautifully preserved city.

We had a wonderful time sipping hot chocolate and coffee laced with rum (costing us about £4.50) while swathed in furs in a pavement cafe.

Meanwhile, cocktails at Hemingway’s Bar, which is very atmospheric with dark wood panelling, were a delicious treat, and cost around £8 each. When not indulging, we explored the labyrinthine lanes, ancient churches, the historic castle on the hill and the Old Town Square with its incredible clock (the world’s oldest working medieval clock).

Prague is a Unesco World Heritage Site and full of Gothic grandeur.

My favourite building was the Church of Our Lady Before Tyn, which looks like a fairytale castle with its twin asymmetrical towers.

There is a slew of new ‘artisan’ restaurants, although the majority in the centre still serve traditional Czech cuisine.

The markets in Prague run from November 30 to January 6.

As we discovered, they’re a very atmospheric — and romantic — way to kick-start the Christmas season.

Diana travelled with Jet2.com from Glasgow to Prague. Three nights in two ‘deluxe’ rooms at the Alchymist Grand Hotel and Spa cost £2,440 B&B for four, including flights and transfers, or £610pp.