The high-profile trip to South Africa, Botswana, Angola and Malawi last autumn had been billed as one of the showpiece events of the royal year.

But the couple left months of work by staff and diplomats in tatters after they launched a stinging rebuke against the media during the publicly funded trip, as well as secretly recording an explosive TV documentary in which Meghan painted Harry’s family as uncaring by accusing them of failing to ever ask if she ‘was OK’.

The Sussexes, who also took baby son Archie on the trip, stepped down as senior working royals months later, and now live in the US, where they are financially independent having signed a multi-million-pound deal with Netflix.

Royal accounts published today show £245,643 was spent on scheduled flights and a private jet for the couple and their entourage, making it the most expensive royal trip of the year.

Sources defended the cost, saying it was a key visit approved by the Foreign Office and helped highlight the work of numerous charities.

‘The Duke and Duchess of Sussex undertook over 20 engagements, bringing attention to a number of worthwhile causes, in particular, raising awareness of the work and the legacy of the Halo Trust [an anti-landmine charity championed by Princess Diana],’ the source said.

‘The visit, as an official visit funded by the Government, fulfilled the objectives that were set out for it.’

A further £210,345 was spent by royal officials on a private charter plane to take Prince Charles to Oman to pay his respects after the death of the king. 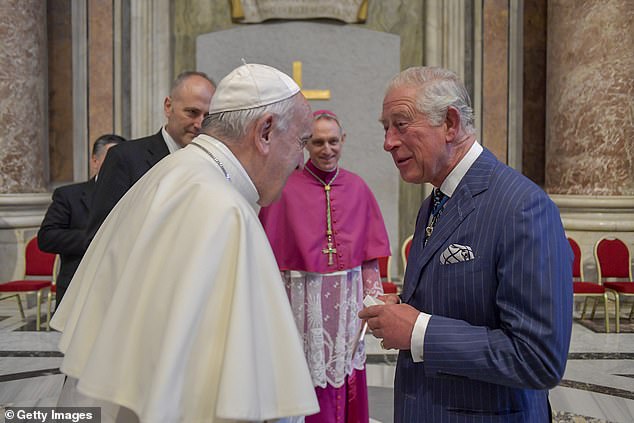 £41,035 was spent getting Prince Charles to Rome for the canonisation of Cardinal Newman

The Duke and Duchess of Cambridge’s tour to Pakistan last year was the third most expensive of the year, costing £117,116, but was considered a huge success by ministers.

Questions have also been raised about the £15,848 spent to flying beleaguered Prince Andrew by private jet to the Royal Portrush Golf Club in Northern Ireland for a two-day trip to the Open Championship last July.

The club later dumped him as patron following his disastrous television interview in November.

A palace source defended Andrew’s use of a charter instead of a scheduled flight, saying: ‘In this particular case we concluded that, actually, the use of charter was the only way to get him to complete his engagements to fit in with his other programmes.’ 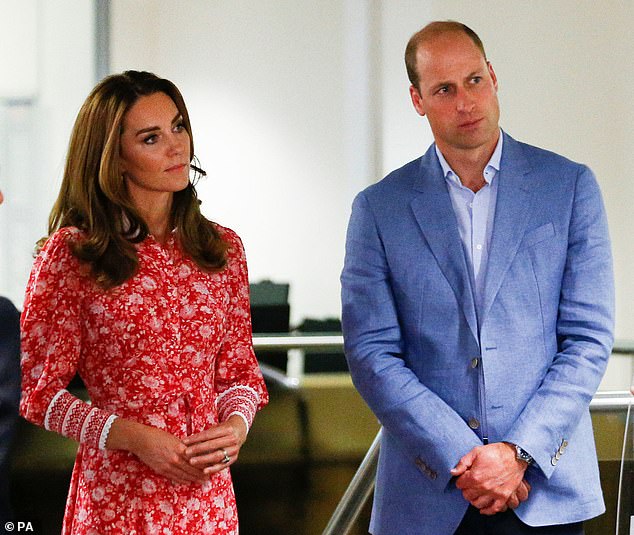 The Duke and Duchess of Cambridge’s (pictured in London on September 15) tour to Pakistan last year was the third most expensive of the year, costing £117,116, but was considered a huge success by ministers 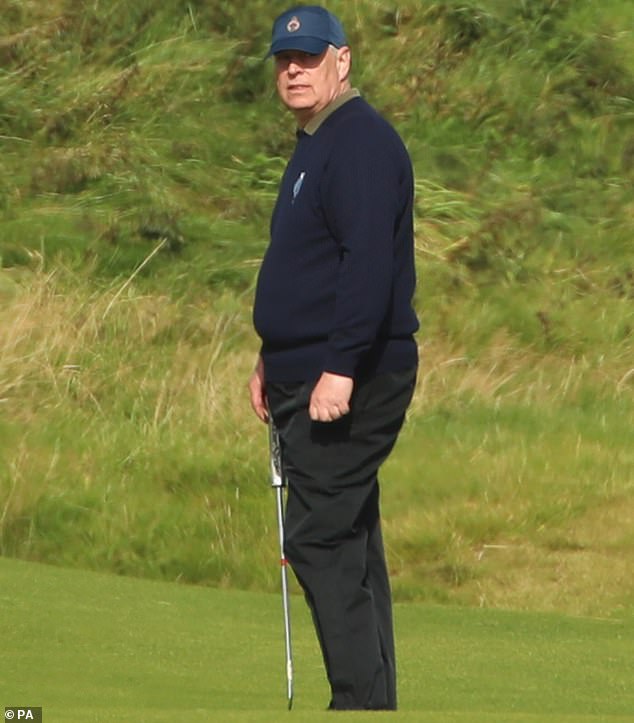 Questions have also been raised about the £15,848 spent to flying beleaguered Prince Andrew by private jet to the Royal Portrush Golf Club in Northern Ireland (pictured)

Just three trips were taken on the Royal Train last year – at a cost of more than £63,000. Only the Queen and Prince of Wales are permitted to use the distinctive claret-liveried locomotive which has sleeping, dining and lounge carriages.

Charles used it to travel from his Gloucestershire home to Carlisle for royal visits, costing £20,822. He also used it to visit Wales at a cost of £19,737.

The Queen travelled in the train just once last year, from London to Edinburgh, to spend her annual week at the Palace of Holyroodhouse. That journey cost taxpayers £22,696.

The royal train, pictured left with the Queen, has long been a point of contention but is normally used ten to 14 times a year.

Asked if the drop in usage meant it should be scrapped, a royal source argued that the royal train was still an ‘effective and efficient’ means of travel.

Even diligent Princess Anne found herself under the spotlight for spending £16,440 on another private jet to take her from London to Rome and back to watch her beloved Scotland play in the Six Nations Rugby International against Italy.

She is patron of Scottish Rugby Union.

The total bill for royal travel in 2019/2020 was £5.3million, a 15.2 per cent increase on last year’s £4.6million, according to the palace’s annual report and accounts, published today.

Anti-monarchist campaign group Republic said the figures failed to reflect the true annual cost of the monarchy – which it puts at £345million by taking account of lost revenues from the royal estates, policing and the cost to other authorities such as local councils.

‘A 15 per cent increase in travel costs when hospitals can’t deliver the very best care to every person in need, when teachers are struggling to pay for the necessary books and equipment and the police are stretched to breaking point is scandalous.

‘Why is the Government paying for Prince Andrew to go to golfing tournaments, or Princess Anne to attend a rugby match in Italy?

‘This is an abuse of public money far worse than the MPs’ expenses scandal and it has to stop.’

Buckingham Palace also confirmed yesterday that the Duke and Duchess of Sussex have paid an ‘undisclosed’ sum upfront for the rental and refurbishment of Frogmore Cottage. 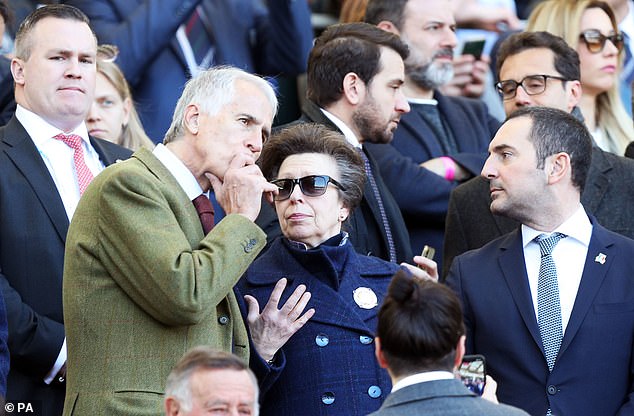 Princess Anne found herself under the spotlight for spending £16,440 on a private jet to take her from London to Rome and back to watch Scotland play in the Six Nations (pictured)

Critics had called for Harry and Meghan to pay back the £2.4million of taxpayers’ money spent renovating their Windsor property, which they have decided to keep on as a permanent base in the UK despite buying an £11million mansion in California.

The accounts also revealed that Prince Charles handed the Cambridges and Sussexes no less than £5.6million – £556,000 more than he gave them last year.

Buckingham Palace has admitted it faces a £35million funding shortfall due to Covid-19 – but says it will not ask for extra public money.

Senior Royal aides said that the household will have to tighten its belt, which could lead to job losses.

Last year the Queen, who still conducted 296 official engagements despite turning 94 in April, was given £82.4million in taxpayer funding – known as the Sovereign Grant.

Donald Trump has lashed out at Meghan over her perceived interference in the US election, saying: ‘I’m not a fan of hers.’

It came after the Duke and Duchess of Sussex made what was seen as a thinly veiled swipe at him ahead of the November poll. Harry urged voters to ‘reject hate speech, misinformation and online negativity’. Despite stepping back from royal life, Harry and Meghan vowed they would uphold the values of the Queen who always remains apolitical. But Meghan said in a video on Wednesday: ‘When we vote our values are put into action and our voices are heard.’

This is not the first time that Mr Trump and Meghan have come to verbal blows. Last year the President called her ‘nasty’ because of her past criticism of him.

The Palace says that this is equivalent to £1.23 for every person in the UK.

The figure is made up of a core grant of £49.4million which is used to fund official travel, property maintenance and the operating costs of her household in her role as head of state.

An additional £33million was given as part of a major £365million, ten-year reservicing of crumbling Buckingham Palace, which was agreed after aides successfully argued the building was on its last legs.

But in the coming years Buckingham Palace is facing tough times, including a £20million shortfall in funding for the reservicing programme.

It is also looking at a loss of £5million a year in funding from the Royal Collection Trust for the next three years due to the palace being closed to visitors and the continuing downturn in tourism.

The Queen’s official Keeper of the Privy Purse, Sir Michael Stevens, said: ‘In responding to both these financial challenges we have no intention of asking for extra funding and will look to manage the impact through our own efforts and efficiencies.’

He did not rule out job losses among the 488 members of staff.

A pay freeze for royal staff was implemented in April and there is also a halt on recruitment, with only ‘business-critical’ posts being filled.

Members of the Royal Family conducted almost 3,200 official engagements last year, both in the UK and overseas.

More than 139,000 guests were welcomed at royal residences across the country, among them Donald Trump, with £69.4million going on official expenditure.

Sir Michael said although the virus had changed the format of events this year, with even the Queen now carrying out some engagements via video call, she and her family still offered ‘continuity, reassurance and recognition’.

He added: ‘Her Majesty’s programme, supported by her family, will continue to develop meaningful ways to lead the nation through this time.’