The X90 will be the first car to monitor drivers using cameras and sensors to detect if they are falling asleep, drunk or overly distracted while at the wheel.

Its suite of technology includes eight cameras, five radars, 16 ultrasonic sensors, and a cutting-edge ‘lidar’ system to create ‘an invisible 360-degree shield of safety’ that it believes can cut severe road accidents by up to a fifth.

While these are designed to alert motorists to potential dangers around them, it will also have two interior cameras, a posture sensor and touch-sensitive steering wheel to permanently monitor drivers to gauge if they are drowsy, ill or looking at their phone while at the wheel.

And, if a motorist is unresponsive to a series of alerts, it can takeover control of the vehicle and bring it to a stop if it thinks a crash could be imminent.

Are you keeping your eyes on the road? Volvo’s new EX90 will be the first car fitted with two interior cameras to monitor the driver at all times

Volvo prides itself on being at the forefront of vehicle safety and has been one of the pioneering brands when it comes to new tech to reduce the number of collisions involving its latest cars.

In recent years it has led the way with a number of first-time safety features, including speed limiters on all its new vehicles produced from 2020 that restrict drivers to speeds of no more than 112mph.

The Swedish firm is also the first to offer customers a separate key they can give to their newly-qualified children and other family members that, when used to start the car, has a speed limit that’s been pre-set by the owners, which can restrict users to drive at a maximum speed as slow as 31mph.

Yet the EX90 promises to take things to the next level thanks to a bounty of technology, including – for the first time ever – interior cameras to permanently monitor the driver.

Volvo says this is the most advanced version of its ‘Driver Understanding system’, which it has been intensively developing for the last three years. 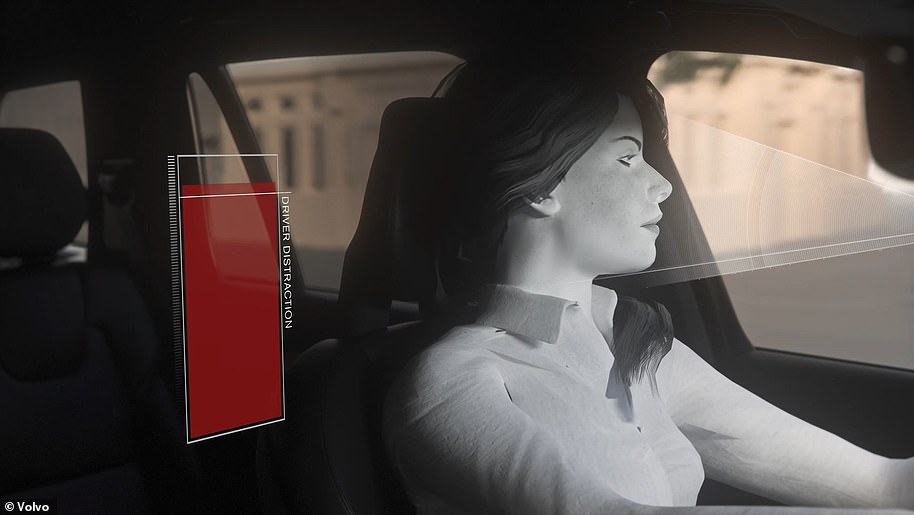 How does the technology work to improve safety?

Two cameras inside the cabin will constantly measure the user’s ‘eye gaze concentration’ and a sensor also monitors the driver’s posture.

One of the cameras is embedded under the digital driver instrument panel behind the steering wheel and the other is placed higher in the speaker housing.

This ‘maximises accuracy from different angles’ so that the system can determine if there might be an issue and ‘provide adequate driving assistance at the right time,’ the Swedish firm tells us.

The cameras calculate for how long the user is looking at the road ahead and then decides if their attention is focused somewhere other than driving.

Volvo stresses there is no output video data from these cameras and they are not recording footage of driver and only measure a driver’s eye gaze direction and head position.

Interior sensing is one of the next safety frontiers for us…

A Volvo-developed algorithm then uses this information to detect the user’s current state and will be able to ascertain if the motorist is overly distracted, tired, drunk or falling ill.

The cameras and sensor will also be able to understand if a motorist is using their mobile phone or another device at the wheel, which stricter new laws introduced on 25 March is now a punishable with £200 fines and six points if drivers are caught in the act.

The steering wheel also has sensors built into it to understand if the driver has released their grip due to falling asleep or a health-related issue.

‘Our research shows that by simply observing where the driver is looking and how often and for how long their eyes are closed, we can tell a lot about the state of the driver,’ explains Emma Tivesten, a senior technical expert from within the brand’s Safety Center.

‘By basing its calculations on our research findings, the sensing system allows our cars to identify whether the driver’s ability is impaired, perhaps due to drowsiness, distraction or other causes for inattention and to offer extra assistance in a way that best suits the situation.’

Thomas Broberg, who heads Volvo’s Safety Centre says interior sensing is ‘one of the next safety frontiers’ in the automotive sector.

The auto giant says the technology will continue to improve over time as it learns how driver’s behave.

Any changes to the system will be available via over-the-air software updates than can be downloaded to the vehicles belonging to existing customers.

What happens if the system detects a driver is asleep or ill?

If the cameras, sensor and capacitive steering wheel detects something is out of the ordinary, it will attempt to alert the driver with a series of warnings.

The first will be an audible beep, followed by a ‘soft nudge’, which will be a vibration sent through the steering wheel and seat.

However, if the motorist fails to respond to these, either because they’ve fallen asleep or take ill, the EX90 will be able to bring itself to a safe stop, automatically activate the hazard warning lights to alert other motorists, and then call for help.

Volvo says this tech will help it to make significant strides to meet its future goal of there being zero crashes involving its cars in the future. 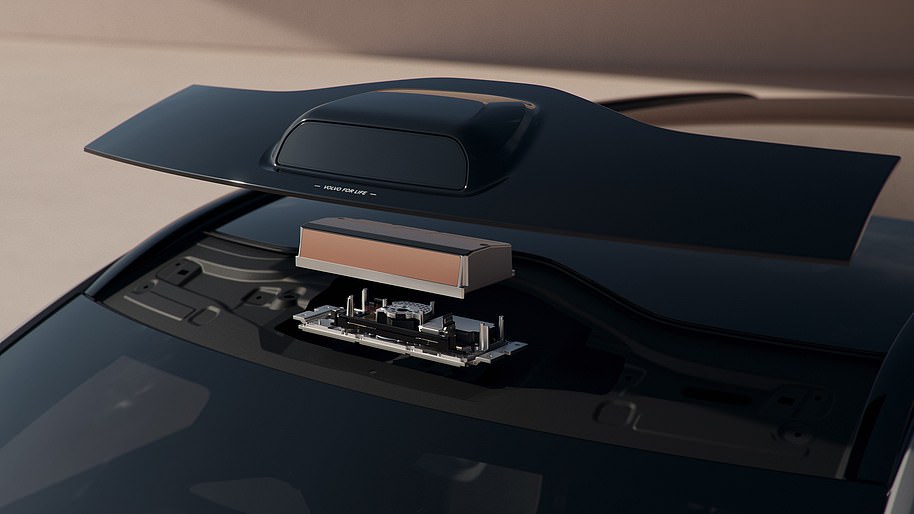 The lidar feature – its most advanced ever – will even be able to spot objects, animals and people in the road hundreds of metres away, day and night. The system powering it is packed below a panel on the roof just behind the top of the windscreen

A safety suite of 30 cameras, sensors, radars and lidar

As well as monitoring the driver’s state, the EX90 is packed with more road-analysing safety tech than any Volvo to date.

Its package of sensors, cameras, radars and a new lidar system – which uses light in the form of a pulsed laser to detect things up ahead – work in unison to give a ‘real-time view of the world’ around the zero-emission SUV.

‘It’s a car designed to understand you and its surroundings to help keep you, your loved ones and others in traffic safe. It can also get smarter and safer over time, as it learns from new data and receives updates,’ the company tells us.

The lidar feature – which is located in a panel above the windscreen and is Volvo’s most advanced ever – will even be able to spot objects, animals and people in the road hundreds of metres away, day and night.

Volvo says it can detect pedestrians at up to 250-metre distances and something as small and dark as a tire on a black road 120 metres ahead, even when the car is travelling at motorway speeds.

It claims the suite of features will reduce accidents resulting in serious injury or death by up to 20 per cent.

It also expects the technology to improve ‘overall crash avoidance’ by up to nine per cent, which could prevent ‘millions of accidents over time’ in what it calls a ‘big step in safety and for mankind’.

‘The development of our latest safety technology is based on understanding human behaviour, rooted in decades of our own and others’ safety research,’ Volvo says.

‘Every one of us is likely to experience or be affected by at least one car crash in our lifetime.

‘That’s not a judgment: we know that most of the time you’re a great driver, alert and ready to act when needed. But we’re all humans, and that also means to experience emotions.

‘We know that distraction and tiredness are facts of life, and that they travel with us. We know that you may not always be at your best, for whatever reason. And in traffic, it takes only a few seconds for the unthinkable to happen.

‘So our aim is to help you be a better driver and reduce the risk of a crash happening.

‘The Volvo EX90 comes with an invisible shield of safety that includes our latest sensing technology, allowing the car to understand your state of mind and the world around you.’