High street retailers across the UK started 2020 facing tough conditions as customers increasingly looked towards online competitors, but no-one could have predicted the level of turmoil in store.

The coronavirus pandemic led to temporary closures, social distancing and dwindling tourist numbers, which all weighed on UK towns and cities.

A raft of retailers cut jobs, closed stores and secured restructuring deals to survive. However, for some companies, none of these measures were sufficient to preserve their place on the high street.

Lots of famous retailers are currently in administration with the fate of their bricks and mortar stores unclear.

Mothercare’s UK business collapsed with the loss of 2,500 jobs and 79 stores after failing to secure a rescue deal

The health, beauty and baby products chain was the year’s first major casualty, shutting the doors of its UK stores for good after 59 years.

Mothercare’s UK business collapsed with the loss of 2,500 jobs and 79 stores after failing to secure a rescue deal.

The company underwent a Company Voluntary Arrangement (CVA) restructuring in 2018, shutting a raft of stores, but tumbled into administration a year later after failing to turn around its fortunes.

Mothercare still sells its products in the UK through Boots stores and has a franchise operation overseas. 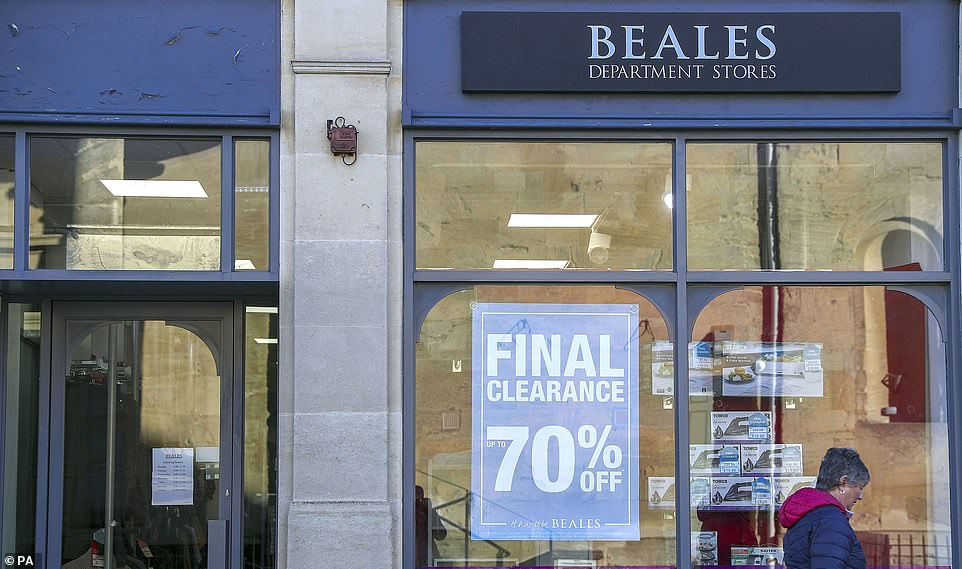 Beales tumbled into administration at the start of the year, announcing plans to shut 12 of its 23 outlets

The 139-year-old department store chain opened its doors for the final time in March, as the pandemic started to have an impact on retailers.

Beales tumbled into administration at the start of the year, announcing plans to shut 12 of its 23 outlets, as talks with potential buyers faltered.

The company employed approximately 1,050 people before announcing its first closures.

However, the coronavirus crisis speeded its demise, with the group shutting its final stores weeks earlier than planned after the outbreak meant sales took a nosedive. 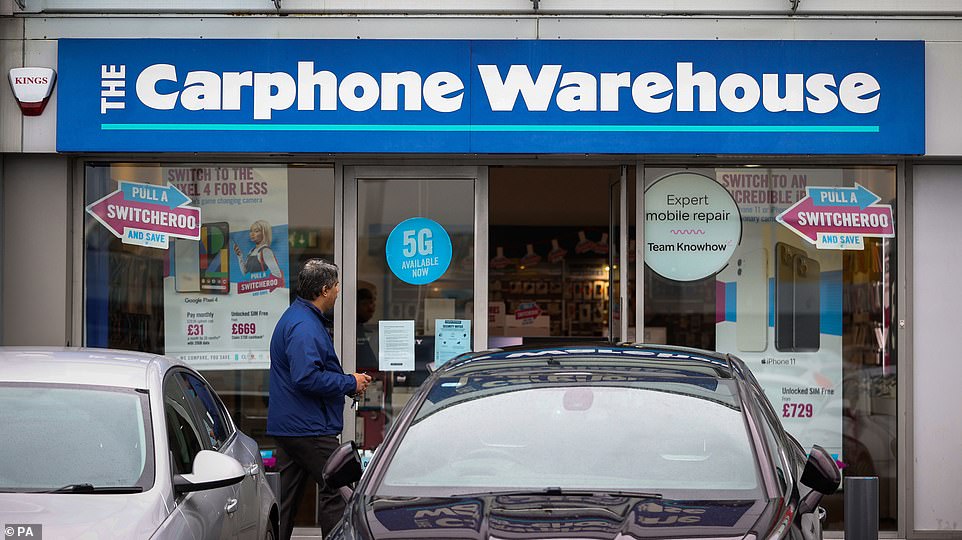 The announcement of Carphone Warehouse’s closure in the UK impacted 531 outlets and almost 3,000 workers

In March, technology retail giant Dixons Carphone wielded the axe on its Carphone Warehouse chain, closing all of its UK stores.

The move hit 531 outlets across the country and almost 3,000 workers.

However, the group said some 1,800 affected staff would be given new roles elsewhere in the business.

The company’s 70 Carphone Warehouse stores in Ireland remained open and its international operations were unaffected.

However, the move reflected a sharp decline in the Carphone Warehouse brand after its £3.8 billion ‘merger of equals’ with Dixons in 2014. 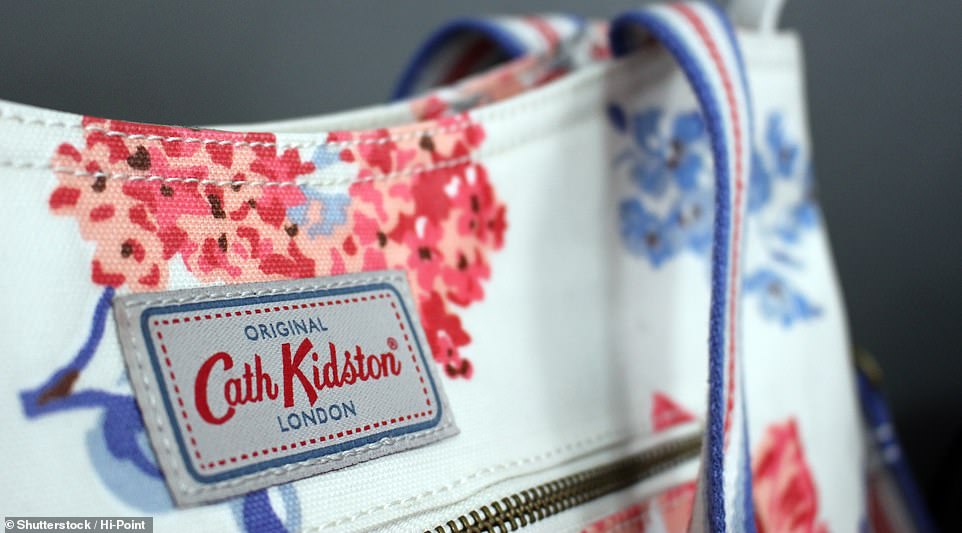 The retro-inspired retailer tumbled into administration in April after a downturn in profitability.

The company closed all of its 60 UK stores, with the loss of 900 jobs, as the pandemic proved to be the final straw.

Months later, it said it had secured new funding from parent company Baring Private Equity Asia to return as an online-only operation.

However, the brand made a small high street comeback earlier this month following the rescue deal.

The group reopened its flagship store in London’s Piccadilly ahead of Christmas, although it said it was an ‘experiential’ store to showcase products it will sell online. 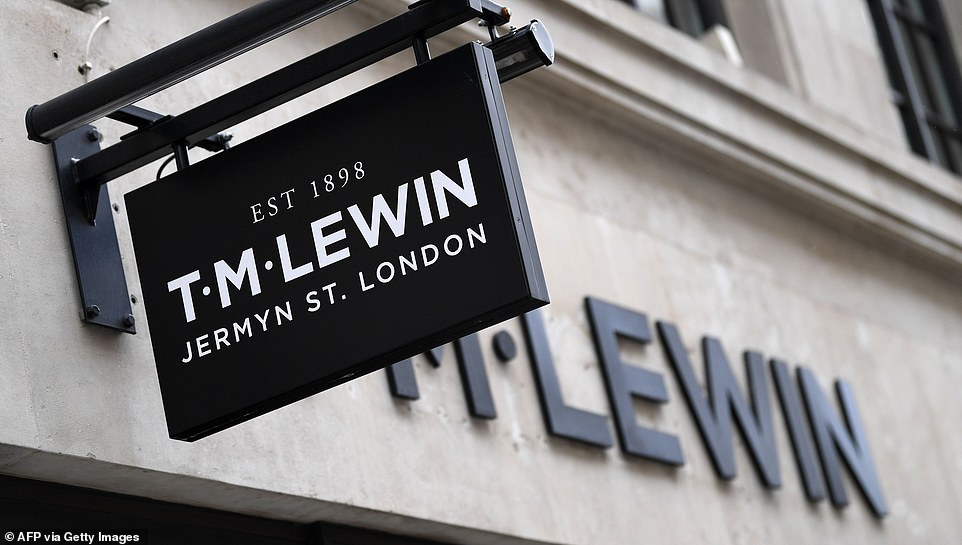 Early in 2020, the company was bought by Stonebridge Private Equity through its subsidiary Torque Brands.

Just two months later, the new owners revealed plans to close the 122-year-old firm’s entire network of 66 shops, with the loss of around 600 jobs.

The group said it was switching all sales to the internet in a bid to save the brand in the post-Covid retail environment. 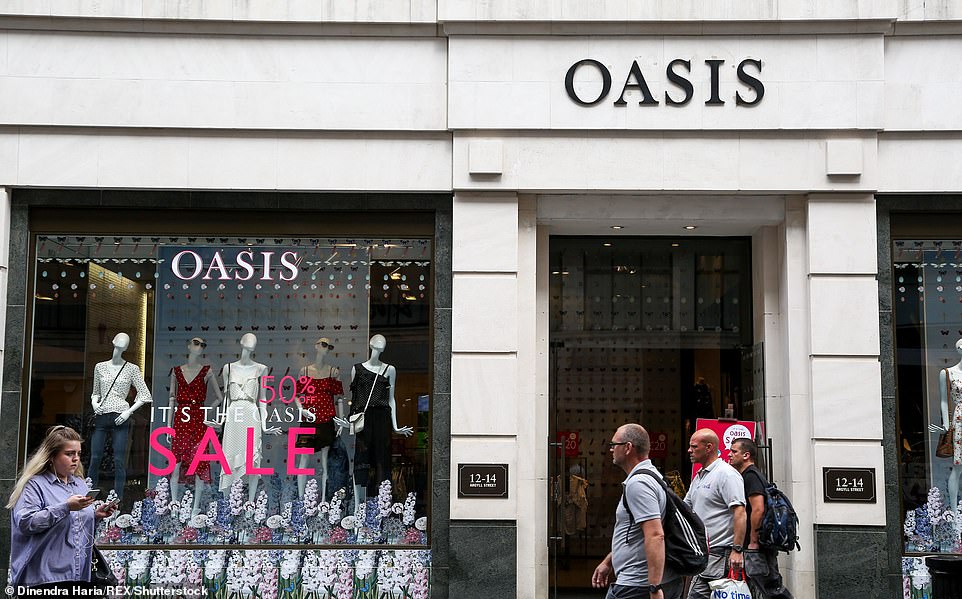 The Oasis Warehouse group, which had 92 branches and 437 concessions at department stores, had been owned by failed Icelandic bank Kaupthing

More than 1,800 jobs were lost after sister fashion chains Oasis and Warehouse said they would not reopen any of their stores again in April.

The Oasis Warehouse group, which had 92 branches and 437 concessions at department stores, had been owned by failed Icelandic bank Kaupthing.

Administrators for Kaupthing attempted to dispose of the brands in 2017 but held on after failing to secure a buyer.

In 2020, the brands themselves needed administrators and wound up their retail store business after failing to find last-minute suitors.

Nevertheless, the brands have had a new lease of life online after Boohoo bought them to sell through its website later in the year. 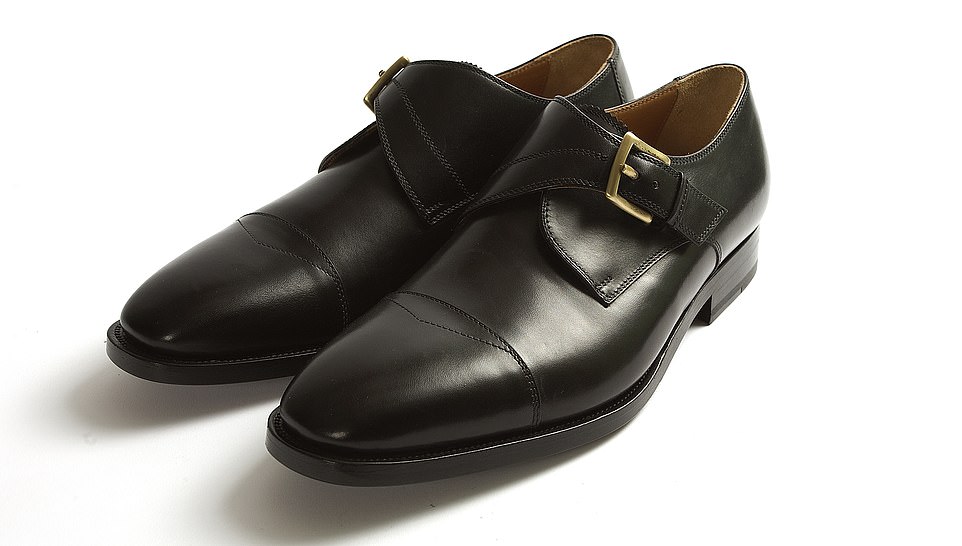 Oliver Sweeney closed its five stores, in London, Manchester and Leeds, but said it would continue to operate online

Shoe retailer Oliver Sweeney shuttered all its stores for good after hiring administrators during the summer.

The company closed its five stores, in London, Manchester and Leeds, but said it would continue to operate online.

Chief executive Tim Cooper said he would continue to lead the business, adding that he was ‘disappointed’ about the store closures but was ‘confident’ about shifting the group online. 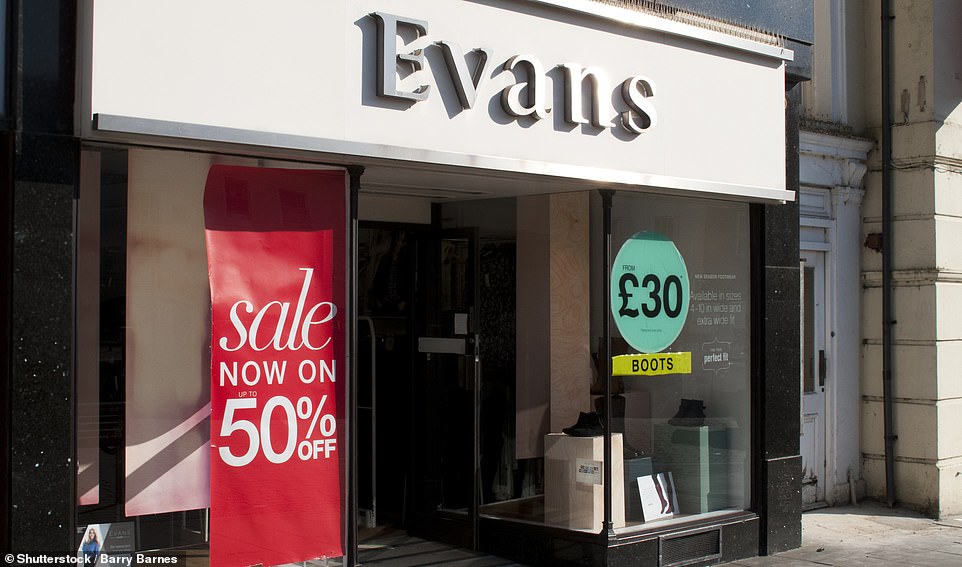 Plus-size clothing brand Evans became the first in the Arcadia stable to be bought out of the retail giant’s administration process earlier this month.

However, the group’s £23 million takeover by Australian group City Chic did not include its bricks and mortar business.

As a result, Evans said it would not reopen its five remaining UK stores.

The deal will also raise questions over whether other Arcadia brands, such as Wallis, Burton and Dorothy Perkins, could also have online-only futures and disappear from the high street for good.

The rent-to-own store went into administration in March, putting more than 2,000 jobs at risk.

All 240 stores had to then close due to the Covid lockdown, and it now appears they will not reopen. 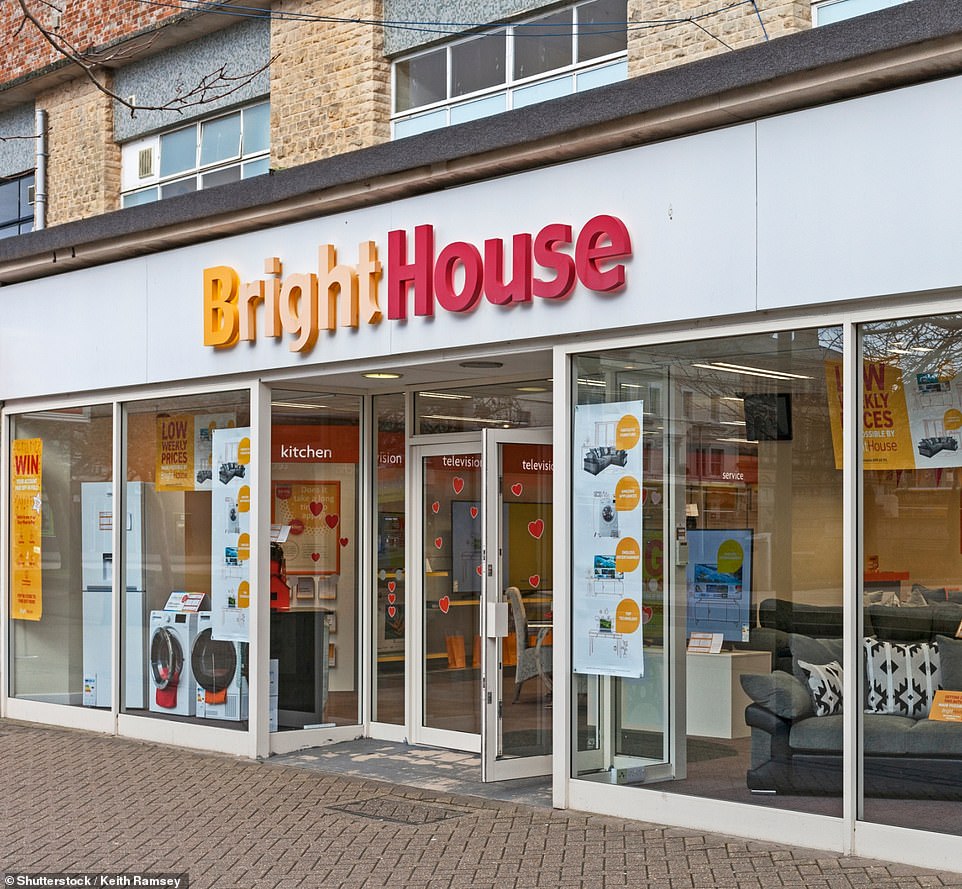 All 240 Brighthouse stores had to then close due to the Covid lockdown, and it now appears they will not reopen

Once one of the leading sports shop brands in the country. Formed in 2009 and owned by former footballer turned chairman Dave Whelan, DW fell into administration in August. 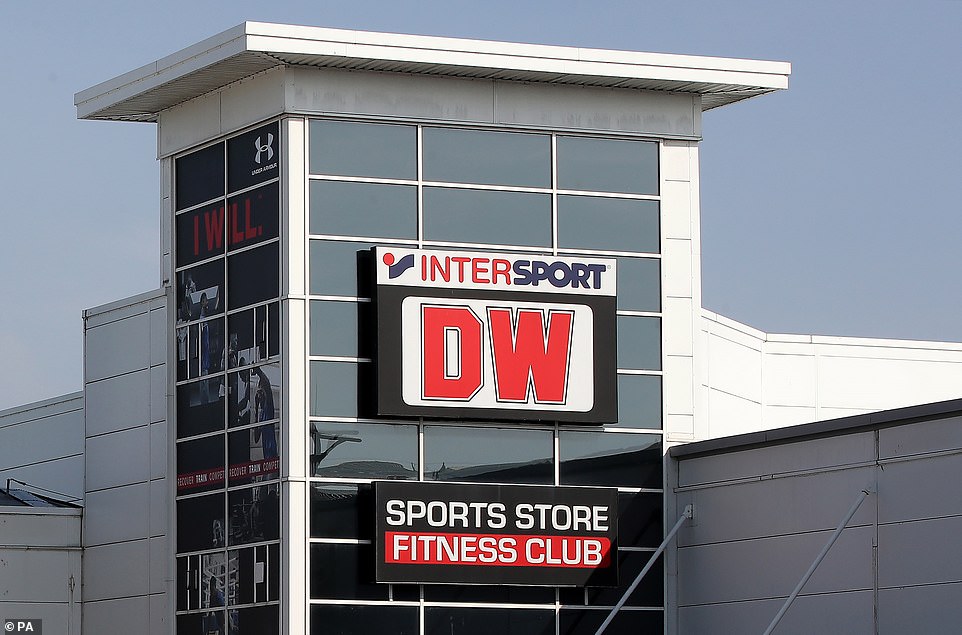 Once one of the leading sports shop brands in the country. Formed in 2009 and owned by former footballer turned chairman Dave Whelan, DW fell into administration in August

Announcing its administration, the company said its income had been hit by the Government enforced closure of its gyms and stores during the Covid pandemic.

DW Sports operated 73 gyms and 75 retail sites across the UK and employs more than 1,700 people.

Who will be next?

Many retail brands had a tough 2020 and entered insolvency without yet disappearing from our streets for good.

However, retail analysts have predicted that some of these debt-laden companies could fade away soon.

Debenhams is expected to cease trading for its final time in the new year, saying it will shut all its stores by March at the latest unless a remarkable rescue deal is secured.

The company is currently going through liquidation and selling off stock after talks with JD Sports over a potential deal collapsed earlier this month.