EXPRESS INFORMER > Business & Finances > The Queen’s driving passion: Cars play a major role in the lives of the Royal Family

As a regal way to travel on four wheels, the beautiful Gold State Coach, drawn by eight horses, will be the star of the Queen’s Platinum Jubilee celebrations.

But motor cars driven by mechanical horse-power have also been a central part of the lives of our Royal Family since the dawn of motoring at the end of the Victorian era.

The Queen herself enjoys driving both rugged and refined 4x4s around the royal estates — and isn’t afraid of getting her hands dirty under the bonnet.

On tour: The Queen and Prince Philip wave to the crowds from a Land Rover in New Zealand

During World War II, the teenage Princess Elizabeth trained as a driver and mechanic with the Auxiliary Territorial Service.

The Queen is also the only person in the UK allowed to drive without a driving licence. She takes an expert interest in all vehicles joining the Royal fleet.

Locals in Windsor in Berkshire, Sandringham in Norfolk and Balmoral in Scotland are used to seeing a stream of lightly disguised near-to-launch prototypes in the vicinity — or slipped in under cover on trailers — for inspection under her gimlet eye.

Jaguar Land Rover has held three Royal Warrants: from HM the Queen; HRH the Prince of Wales; and, until his death last year, the Duke of Edinburgh.

The Queen’s attendance at an event in Windsor this month was her first public appearance in the fifth-generation Range Rover, now on sale for just under £100,000 and distinguishable by its distinctive brake lights and headlamps.

But even she was pipped to the post by the Duke and Duchess of Cambridge, who were photographed in the new Range Rover at a St Patrick’s Day Parade in Aldershot in March ahead of its global launch in the U.S.

It wasn’t their first encounter with the flagship British 4×4. William drove new mum Kate and their first-born Prince George from hospital to Kensington Palace in an earlier generation Range Rover in 2013.

But the royal links to the motor car go back to the birth of the automobile itself:

Royal commentator Robert Jobson notes in his 2020 book The Royal Family — Operations Manual, published by Haynes: ‘For official duties — providing transport for state and other visitors as well as the Queen — there are eight state limousines, consisting of two Bentleys, three Rolls-Royces, and three Daimlers.

‘Other vehicles in the royal fleet include a number of Volkswagen people carriers. They are painted a special royal claret-and-black livery and the state vehicles do not have registration number plates.’

A familiar sight is the Bentley State Limousine, specially created for the Queen in 2002 to celebrate her Golden Jubilee.

As one might expect, the royal fleet is exceptionally well maintained. So much so that a few eyebrows were raised when the late Duke of Edinburgh was involved in a collision near the Sandringham estate — in an ageing Land Rover Freelander.

For many years, a quirky, discreet Jaguar dealership called R.A. Creamer & Son close to Kensington Palace helped to keep the royal cars on the road, until the firm lost its franchise as it wasn’t considered big enough. 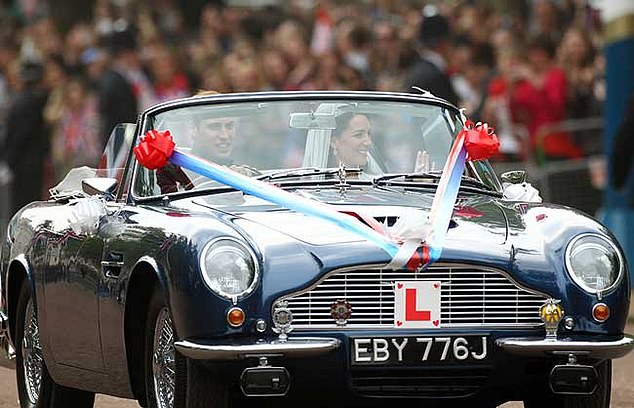 Just married: Newlyweds Wills and Kate head off on their honeymoon in Charles’s Aston Martin

Although the car is often said to have been a 21st birthday gift from the Queen, Charles bought it himself. Prince William also drove it — bedecked with ribbons and balloons — with Kate on their wedding day in April 2011.

As a vocal proponent of green technology, Charles was also one of the first to try out the all-electric Jaguar I-Pace.

On their own wedding day, Prince Harry and Meghan Markle left for their reception in a converted zero-emission, electric Jaguar E-Type.

There are more informal or unofficial royal cars, too.

Princess Diana set in train a long association with German car-maker Audi, and in 2007 the then Kate Middleton joined the royal Audi club with a silver turbo-diesel A3.

Most notable among her cars was a 1994 open-topped metallic green Audi 80 cabriolet, in which she ferried her two young princes, which still pops up at auctions.

In March, the Duke and Duchess of Cambridge followed the lead of the Queen and Prince Philip in Jamaica when they travelled in the same open-top Land Rover that carried William’s grandparents on visits there in 1966 and 1994. But Prince William prefers two wheels to four, with a love of motorbikes.

The Queen’s serious driving days may be behind her — she was chauffeured in a buggy at the RHS Chelsea Flower Show — and even the Gold State Coach is too uncomfortable for her to use in the pageant over the Jubilee Bank Holiday.

But one thing is for sure over this celebratory anniversary weekend: the Royal Family will keep on motoring.

Growing families with a sense of adventure or a need for space take note: Maxus has launched all-electric vehicles for business and pleasure.

The Maxus MIFA 9 is a seven-seat high-spec MPV with a range of up to 323 miles, sliding doors and armchair-style central seats.

The firm’s five-seat T90EV electric pick-up truck has off-road capability, a big cargo area and a range of 198 miles. 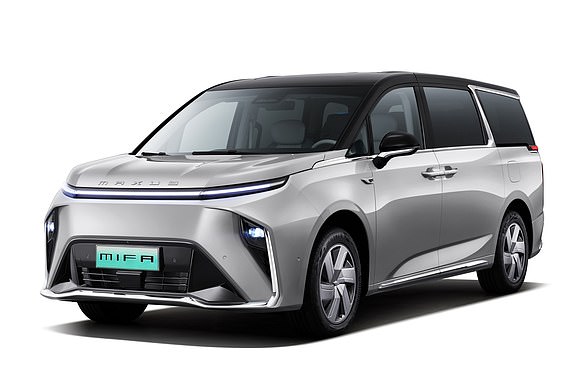 Charge! The seven-seat Maxus MIFA 9 has a a range of up to 323 miles, sliding doors and armchair-style central seats

Both are expected to be priced from around £40,000 plus VAT, pushing the cost for private non-business users up to around £48,000.

The beauty for those who run small and medium-sized businesses is that they get the tax-free fiscal advantage as well as the family fun.

The vehicles made their debuts at the Commercial Vehicle Show at Birmingham’s NEC, where, along with Ford, Isuzu, Toyota and Ineos Grenadier, Maxus had one of the biggest presences.

Maxus is the commercial vehicle arm of Chinese car-maker SAIC, with its roots in Birmingham van maker LDV. 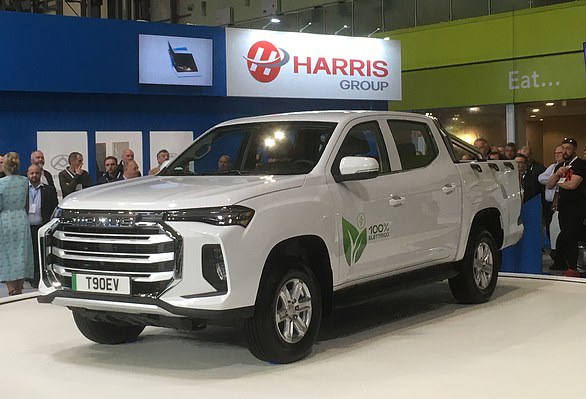 Mark Barrett, of the Harris Group, which imports the vehicles into the UK and Ireland, says: ‘The growth and interest in EV vans, particularly from the grocery, delivery and pharmaceutical sectors, is phenomenal.’

But manufacturers warn that a lack of public charging points could stifle the switch to battery power and scupper clean air targets.

Mike Hawes, chief executive of the Society of Motor Manufacturers and Traders, says the Government needed a ‘van plan’ to accelerate take-up, adding: ‘Britain’s businesses run on vans and if we’re to deliver carbon emissions cuts, we need them to move to electric.’