The Queen will not attend Royal Ascot today as she misses out on the event amid her ongoing mobility issues – but there will be a procession featuring Prince Charles, Camilla and Peter Phillips in the first carriage.

Following behind in the second carriage will be the Duke and Duchess of Gloucester and Prince and Princess Michael of Kent; while in the third carriage will be Princess Anne, the Queen’s close friend Lord de Mauley and former British Horseracing Authority head of stewarding William Nunneley with his wife Caroline.

In the fourth carriage at the procession – the details for which were revealed at noon today – will be the Earl and Countess of Hopetoun along with Tom Hooper and Lady Alexandra Hooper, who is also close with the royals.

Her Majesty was a regular at the Berkshire racecourse before the pandemic and has been at every Royal Meeting since acceding to the throne in 1952, apart from when it was held behind closed doors in 2020.

However the 96-year-old monarch will likely be watching from home just seven miles away at Windsor Castle this afternoon, especially when her horse King’s Lynn races in the King’s Stand Stakes at 3.40pm.

The Queen, who has owned 22 winners of races at Royal Ascot, was among racegoers attending last year after it was selected to take part in the Government’s events research programme on behalf of the sport of racing.

She did not attend the first day of last year’s races but was later present at day five with her racing manager John Warren and inspected her four horses in the Parade Ring after they crossed the finish line.

The Queen is a passionate horse breeder and has a number of runners scheduled to be entered at Royal Ascot this week. But while the monarch will not be in the royal box today, racegoers are likely to see Charles, Camilla and Mr Phillips amongst other royals in there. 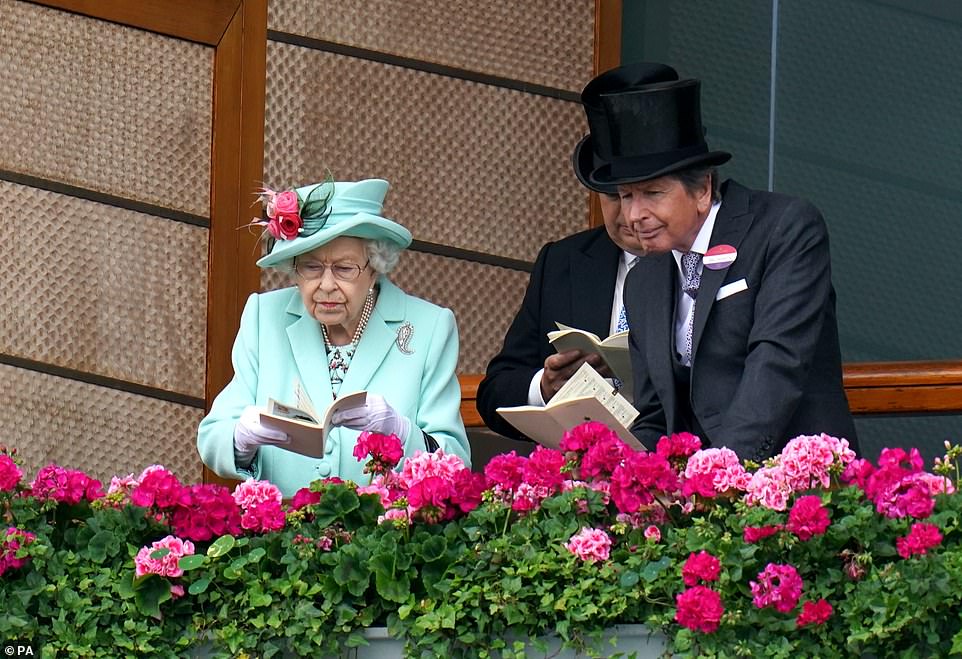 2021 — The Queen with her racing manager John Warren during day five of Royal Ascot at Ascot Racecourse on June 19, 2021 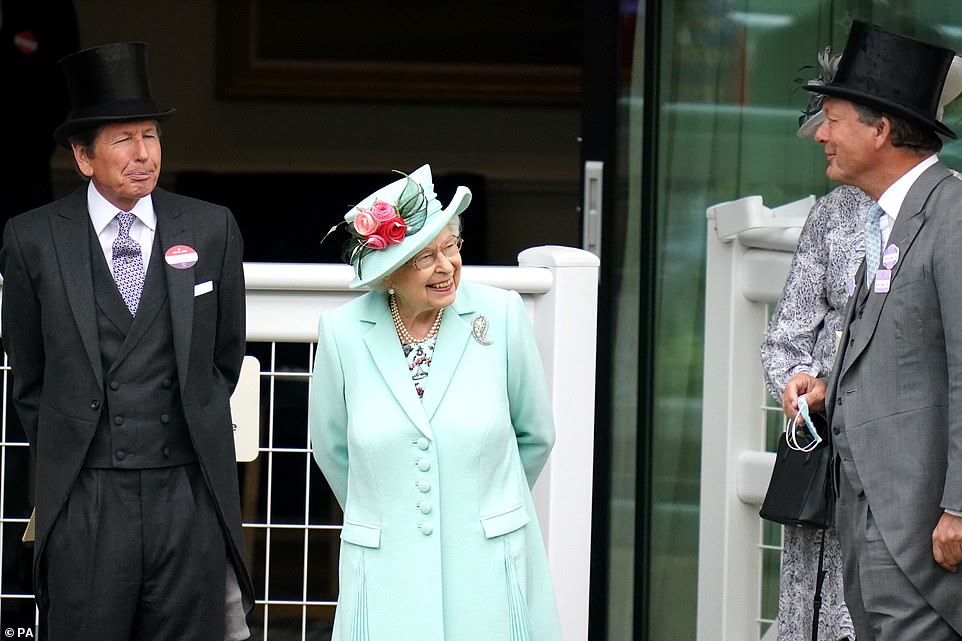 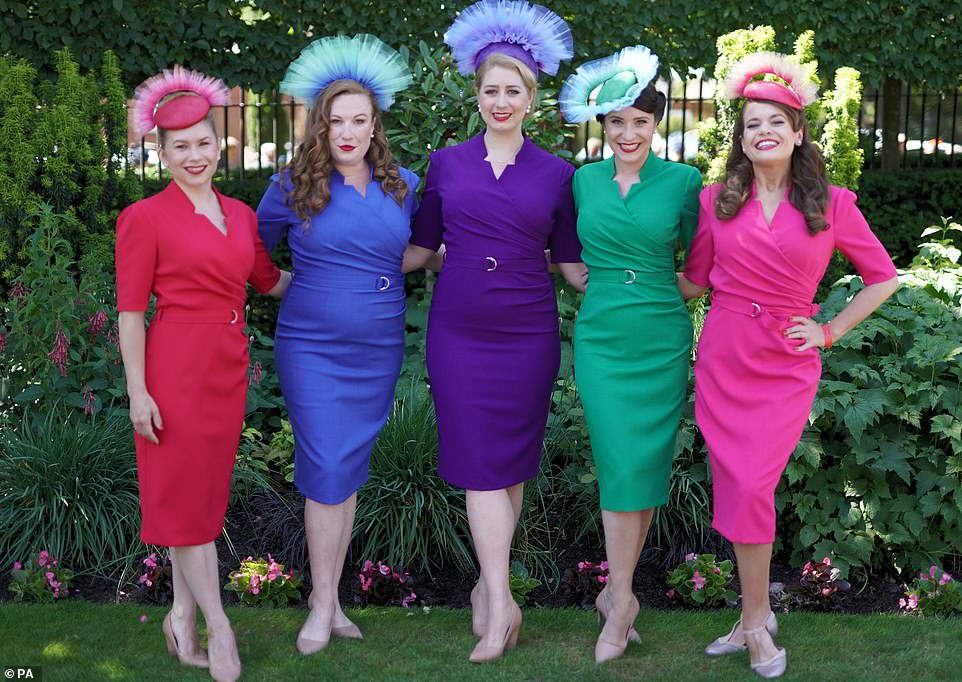 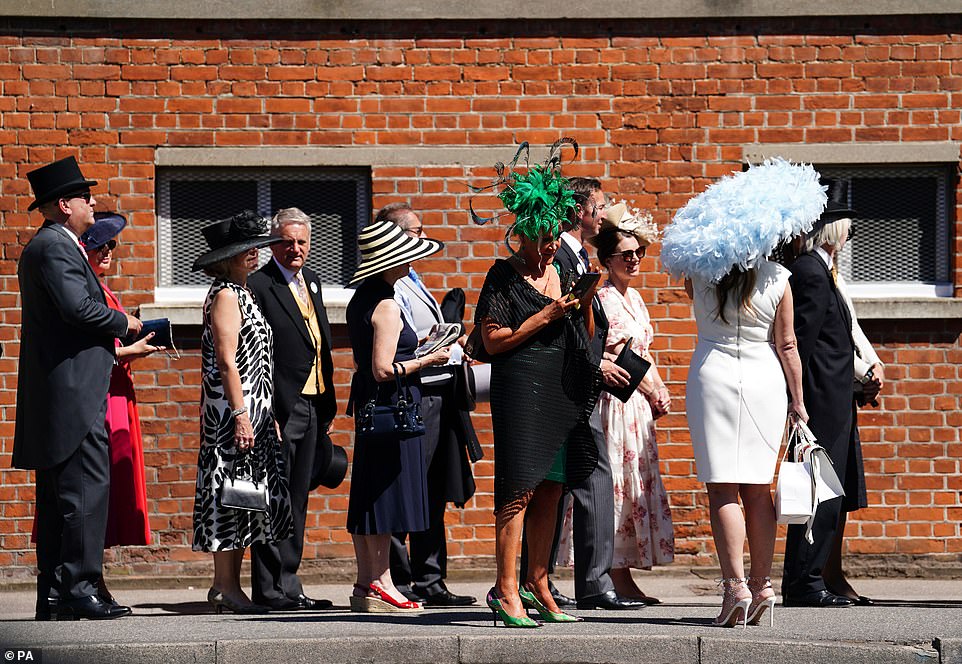 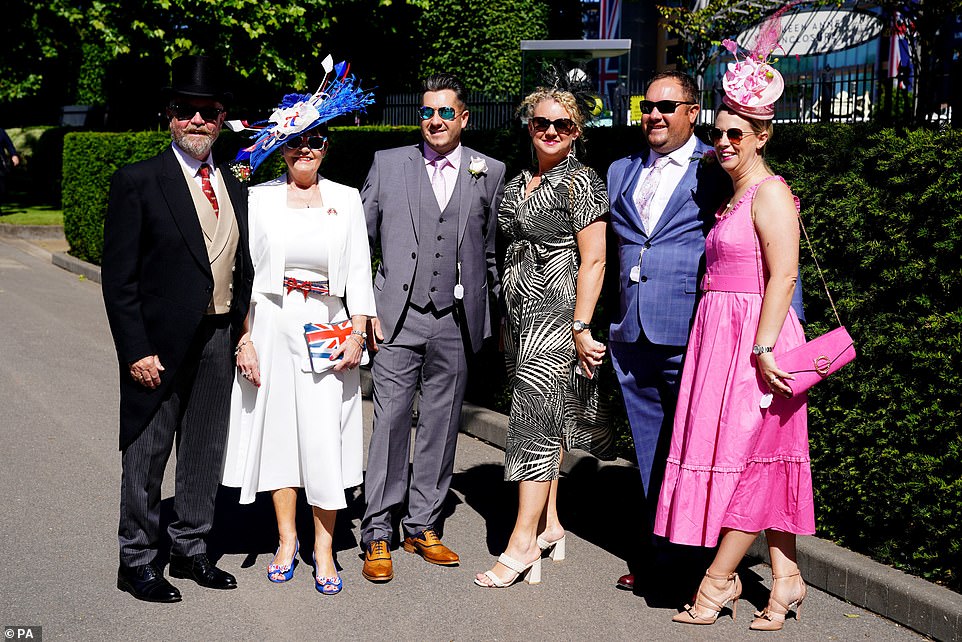 Yesterday, the Queen was pictured with Charles and Camilla to mark the Order of the Garter service – with the monarch dressed in a silver white gown and her blue Garter sash and holding a walking stick.

The photograph was taken at Windsor Castle yesterday ahead of the Garter service in St George’s Chapel. On the Queen’s arm was a matching silver handbag and in her hand her glasses.

She was also wearing her Garter star badge, her Bow Brooch and silver shoes. The Queen did not take part in the traditional procession of Garter Knights and Ladies through the grounds of the Berkshire castle.

Given her ongoing mobility issues, the decision was expected and in past years she has travelled by car to the place of worship. She did attend the behind-the-scenes lunch and investiture ceremony. 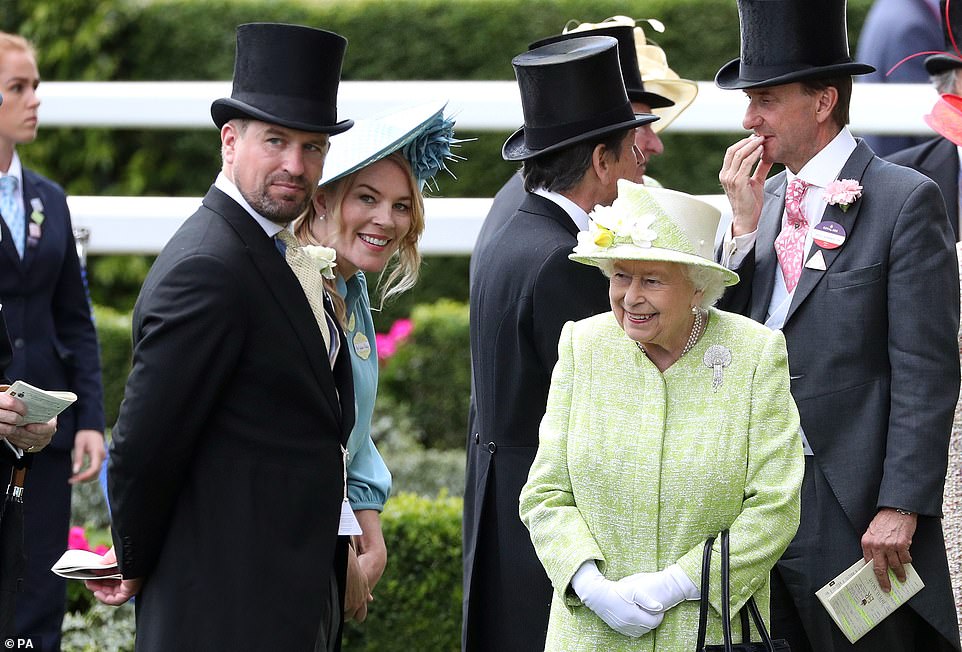 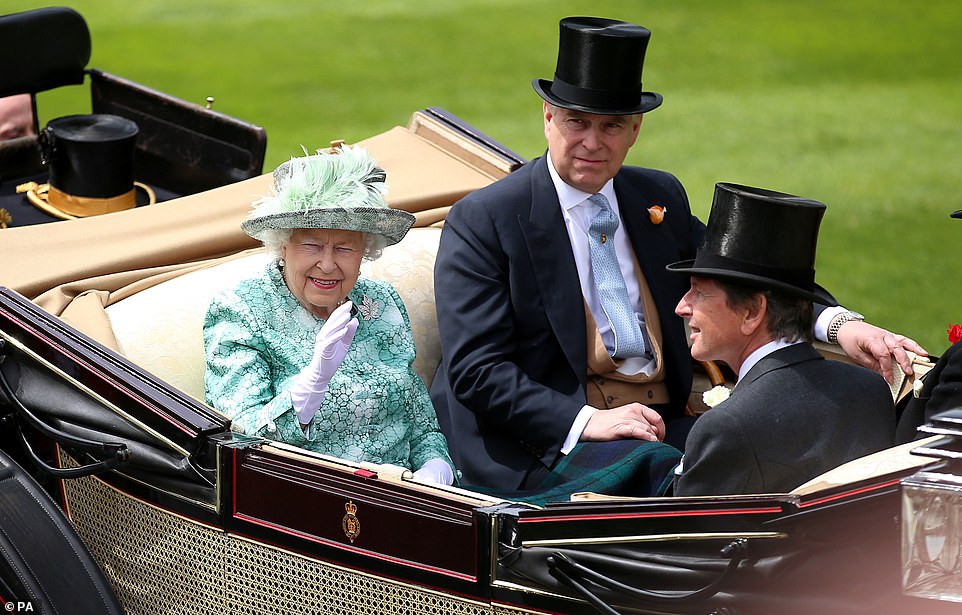 2018 — The Queen arrives with Prince Andrew during day five of Royal Ascot at Ascot Racecourse on June 23, 2018 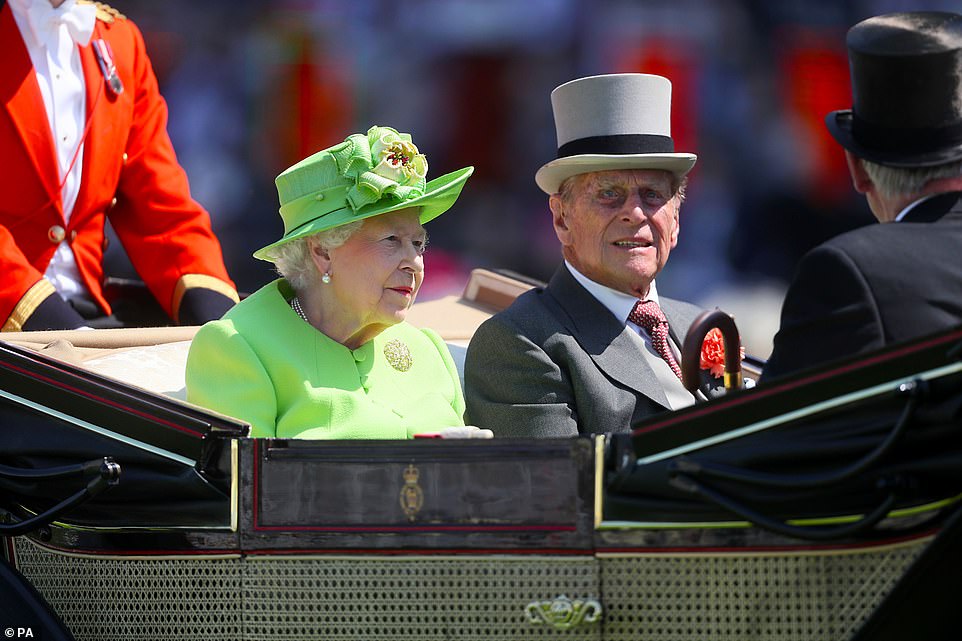 2017 — The Queen and Prince Philip in their carriage during day one of Royal Ascot at Ascot Racecourse on June 20, 2017 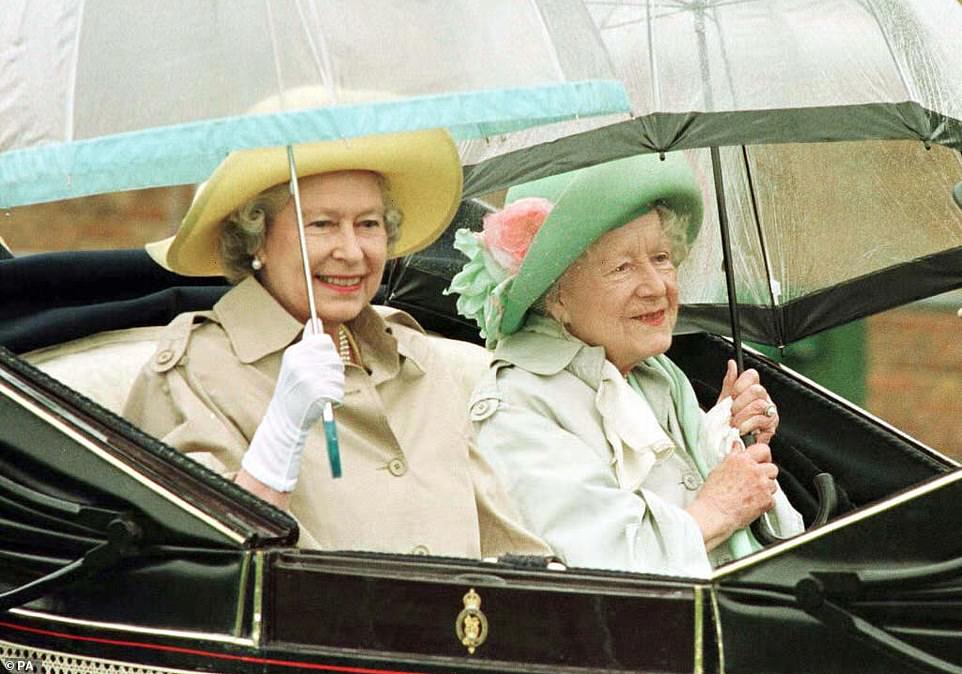 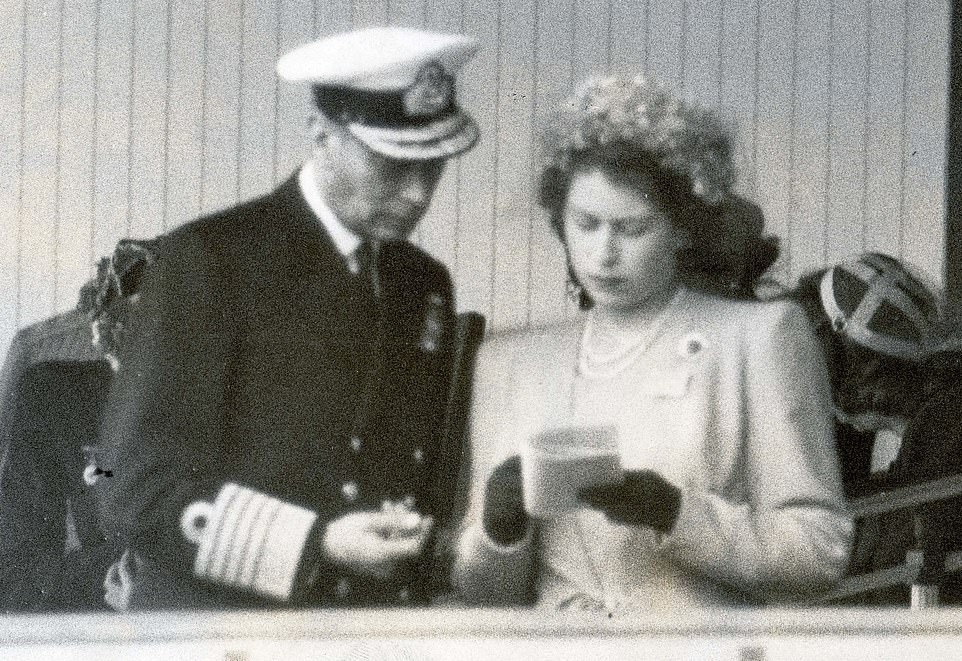 1946 — King George VI and the Queen, then Princess Elizabeth, study a form guide in the Royal Box at Ascot in June 1946

Meanwhile Royal Ascot today welcomed racegoers to the stands for the sporting and social event as punters dressed in outlandish hats, summer dresses and smart suits cheer on the riders over the next five days.

Ascot Racecourse announced earlier in the year that visitor numbers would be reduced as part of its long-term ambition and following feedback from punters who attended the smaller scale Royal Ascot in 2021.

Capacity on each day will be reduced by 1,000 people in the Royal Enclosure, and for the Queen Anne and Windsor Enclosures cut by 4,150 and 2,000 respectively, with new facilities introduced.

Felicity Barnard, commercial director at Ascot, said earlier this year: ‘A key message in the feedback from the 2021 Royal Meeting, when attendance was limited to 12,000 per day as part of the Government’s Events Research Programme, was that people really appreciated the benefit of additional space.’