The Queen ‘backs BLM’: Royals have discussed racism in the wake of George Floyd murder and ‘easily’ support the movement, first black Lord-Lieutenant for London reveals

The Queen and the royal family are supporters of Black Lives Matter and ‘care passionately about making this one nation bound by the same values’ of the anti-racism movement, one of Her Majesty’s representatives has revealed in a new programme.

Sir Ken Olisa, the first black Lord-Lieutenant for London, made the announcement while being interviewed by Channel 4 for Black To Front, a programme produced by an all-black presenting and reporting team and which will be aired on Friday at 7pm.

Speaking to the broadcaster, he said he discussed the topic of racism with members of the royal household following George Floyd’s murder in the US last year and the eruption of anti-racism protests across western societies that summer.

He went on: ‘I have discussed with the royal household this whole issue of race particularly in the last 12 months since the George Floyd incident. It’s a hot conversation topic. The question is what more can we do to bind society to remove these barriers.

‘They [the royals] care passionately about making this one nation bound by the same values.’

Buckingham Palace was rocked by allegations of racism after Harry and Meghan’s bombshell interview with Oprah in March, during which they claimed an unnamed royal raised concerns about how dark their son Archie’s skin tone might be before he was born.

The Duke and Duchess of Sussex also suggested racism could be a factor behind the decision to deny Archie, the first mixed-race great-grandchild of Her Majesty, security protection or the title of prince.

The Queen and the royal family are supporters of the Black Lives Matter movement and ‘care passionately about making this one nation bound by the same values’, one of Her Majesty’s representatives has revealed 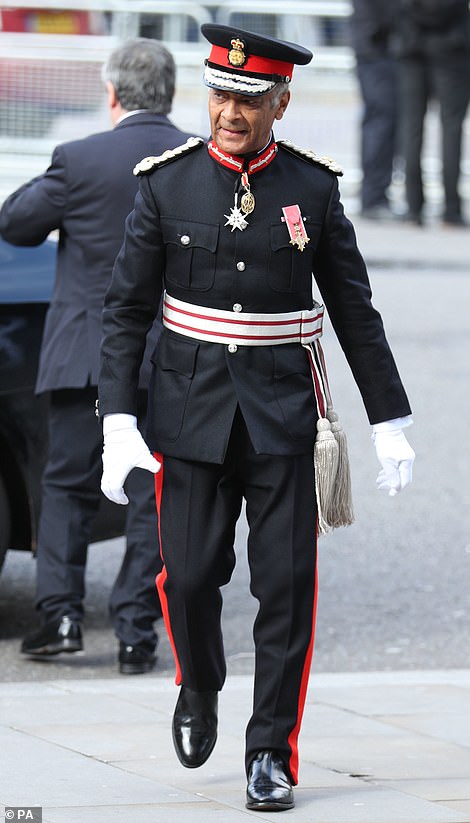 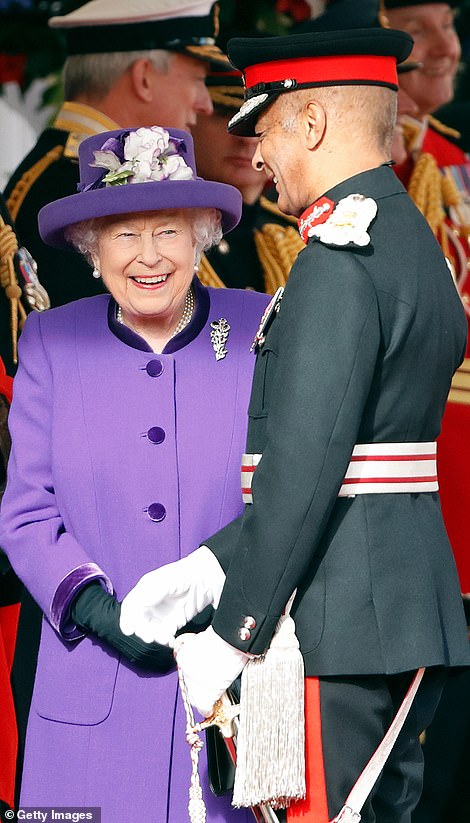 Sir Ken Olisa, the first black Lord-Lieutenant for London, told Channel 4 that he had discussed the topic of racism with members of the royal household in the wake of George Floyd’s murder in the US last year. Left: Sir Ken arrives for a service at Westminster Abbey in London in 2019. Right: Sir Ken with the Queen in October 2018 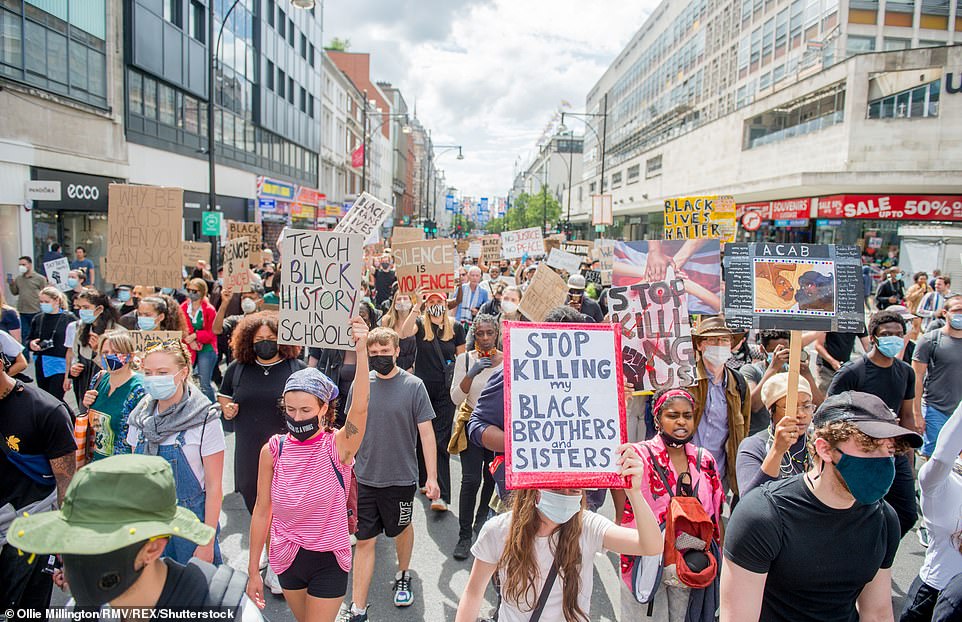 The Queen later issued a statement saying that the issues raised would be dealt with privately as a family, but that ‘some recollections may vary’, while William defended the monarchy, saying ‘we’re very much not a racist family’ soon after the interview aired.

Buckingham Palace has also admitted it ‘must do more’ and is ‘not where it would like to be’ in terms of diversity, after publishing figures that revealed its proportion of ethnic minority employees stands at just 8.5 per cent, with a target of 10 per cent for 2022.

The Queen’s household also brought in a change to its Diversity Strategy in early 2020 – which pre-dates the Oprah interview – to one that actively emphasises the importance of inclusion.

During the Channel 4 programme, Sir Ken also said the Queen had sought his advice after the Grenfell fire on whether to visit the site of the tragedy.

He said he advised the palace to go, but added: ‘I remember thinking as it all happened, it was quite scary, we didn’t know whether she would be booed or have things thrown at her etc and when she got out of the car all these people applauded.’ 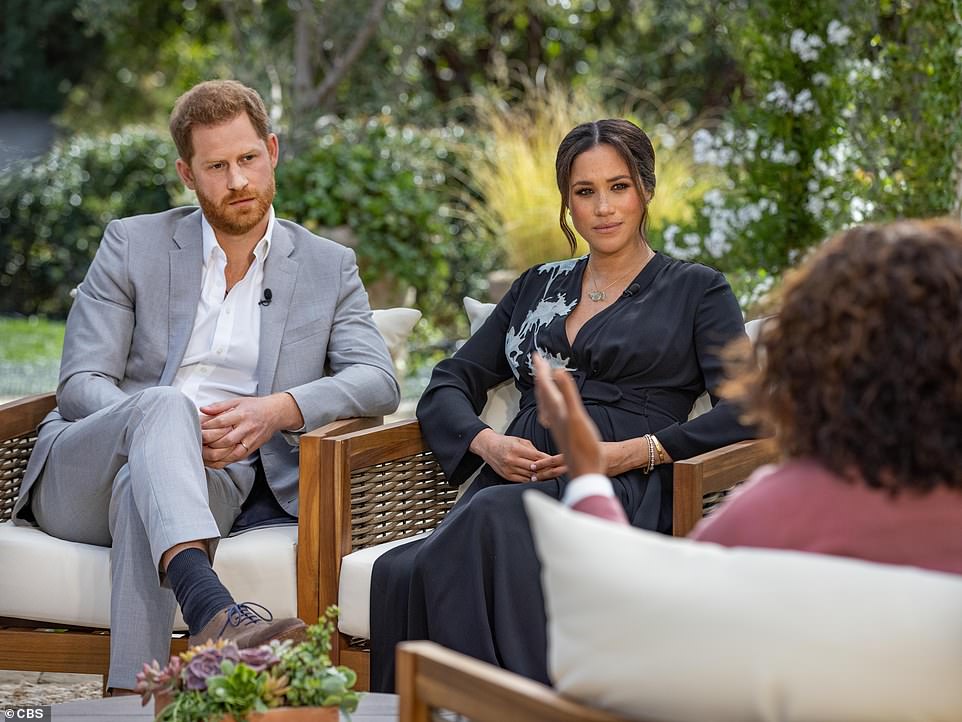 Writing for the Mail after the Oprah interview, Sir Ken said: ‘I am the first to concede that although our direction of travel has been so positive, we have a long way to go. And, as Black Lives Matter reminded us, we need to pick up speed.

‘To do that we need to learn to talk about racism – real and perceived. For example, I believe many white business leaders in the UK do nothing to further the cause of racial diversity for the very reason that they are afraid to discuss it, in case they inadvertently cause offence.

‘That is why we must always concentrate on the context and intention of people’s comments before we judge them.

‘We should not feel afraid to address matters of race and skin colour – even if we make blunders – as long as our objective is benign.’