A credit ratings agency has predicted a spike in mortgage defaults will particularly hit Australians in the outer suburbs of the big cities when interest rates keep rising.

The Reserve Bank of Australia’s 0.25 percentage point increase last Tuesday – ending a record-low era where the cash rate was 0.1 per cent – is far from the last.

Two big banks – ANZ and Westpac – are expecting the RBA to raise rates seven more times by May 2023, which would take the cash rate to 2.25 per cent for the first time in eight years.

A 2.15 percentage point rise in a year would mark the fastest annual surge in the cash rate since 1994 – with maps showing the areas most at risk of mortgage delinquencies throughout the country.

More Australians in outer suburbs will struggle to repay their home loan as interest rates rise – causing mortgage defaults and a plunge in house prices, a credit ratings agency fears (pictured are residents at Campbelltown in south-west Sydney)

Credit ratings agency Moody’s Investors Service said a series of rate rises would make it harder for many borrowers to repay their loans and cause a fall in real estate values.

‘The central bank’s rate rises will push up floating-rate mortgage interest rates, which will worsen borrowers’ capacity to repay debt and increase the risk of delinquencies and defaults,’ it said.

‘Interest rate rises will pose the most risk for mortgages with high balances and those where repayment amounts are close to borrowers’ maximum repayment capacity.’

Moody’s feared a fall in property prices would see struggling borrowers owe more than their property was worth, a situation known as negative equity where they can’t sell their home to repay their debt.

‘Interest rate rises will also weigh on house prices, which will add to risks of home loan delinquencies and defaults because of a weakening housing market will make it harder for borrowers in financial trouble to sell their properties at high enough prices to repay their debt,’ Moody’s said. 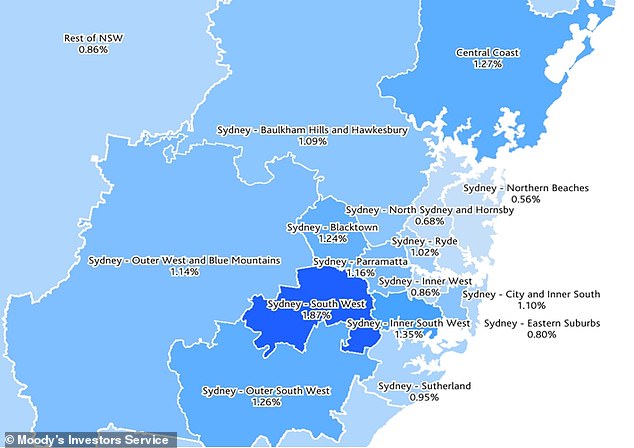 Sydney’s south-west was particularly vulnerable during previous interest rate rises, with the proportion of borrowers falling behind on their repayments increasing 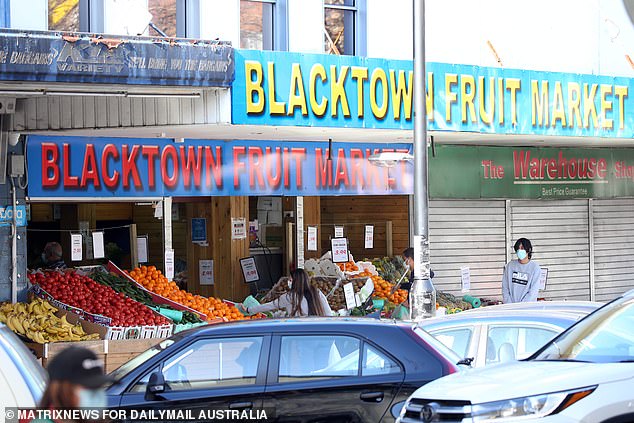 The proportion of borrowers who are 30 days or more behind on their repayments has previously risen when interest rates have gone up and Moody’s is expecting that to happen again.

This would be particularly so in suburbs that already have higher mortgage delinquency rates, including pockets of south-west and western Sydney and northern Melbourne.

‘Mortgage delinquency rates in Australia, which decreased in most states and territories in 2021, will increase moderately over the rest of 2022 because of rising interest rates and slowing property prices,’ Moody’s said.

This would see variable mortgage rates rise from 2.29 per cent to 4.44 per cent.

Variable mortgage rates are set to rise to 2.54 per cent in coming weeks, following the rise in the RBA cash rate by a quarter of a percentage point to 0.35 per cent.

The RBA’s May rise was the first since November 2010.

But Moody’s data from the Global Financial Crisis in 2008 showed home loan delinquencies rose in many outer-suburban areas that traditionally suffer from higher mortgage stress.

Sydney’s south-west was particularly vulnerable during previous interest rate rises, with the proportion of borrowers falling behind on their repayments increasing from 2.62 per cent in 2006 to 3.68 per cent in 2008 as the RBA cash rate increased from 5.5 per cent to 7.25 per cent, Moody’s data showed. 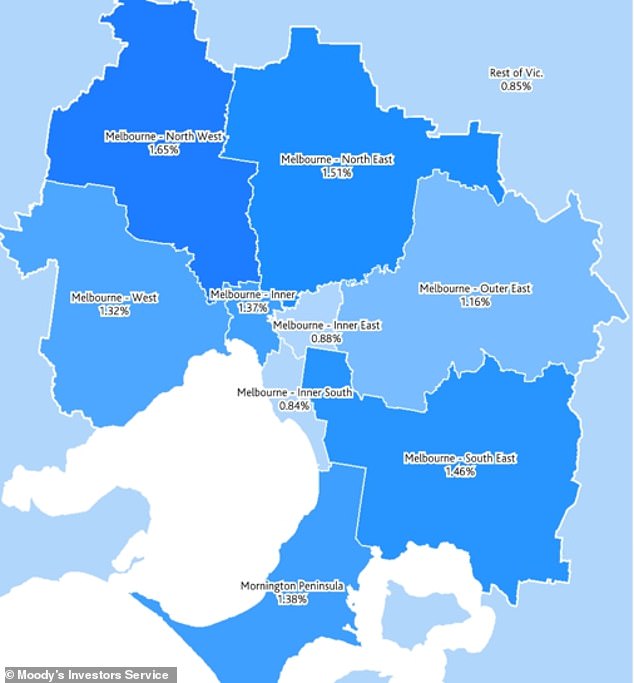 Inflation in March quarter was 5.1 per cent – fastest pace in 21 years

Mortgage delinquencies stayed high at 3.13 per cent in 2011 after the RBA raised the cash rate in late 2010 to 4.75 per cent, following a series of rises starting in 2009 as inflation climbed again.

This region of Sydney had the city’s highest arrears rate of 1.87 per cent in November 2021, before the banks put up their fixed mortgage rates.

Its arrears rate of 1.24 per cent at the end of last year was among the highest in Sydney and more than double the delinquency level of the upmarket North Shore and Northern Beaches.

Blacktown’s median house price of $914,350 in April, based on CoreLogic data, is beyond the reach of an average income earner.

With a 20 per cent deposit, a typical full-time worker on $90,917 would have a debt-to-income ratio of eight.

The Australian Prudential Regulation Authority deems six to be the mortgage stress threshold.

In neighbouring Seven Hills, the median house price has risen above $1million.

Even before the rate rise, housing advocacy group Everybody’s Home and Digital Finance Analytics identified western and south-west Sydney as the worst areas for mortgage stress. 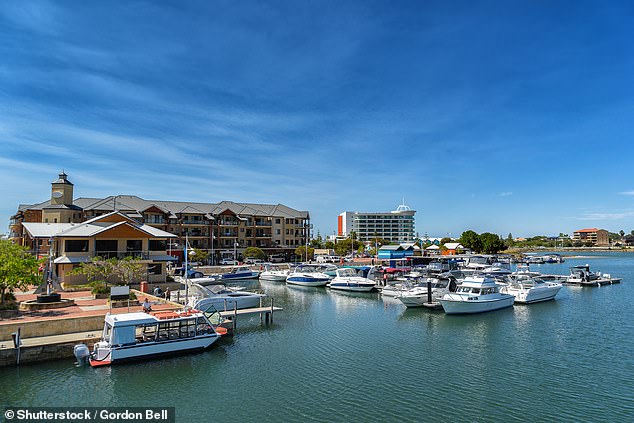 The 1.65 per cent level late last year was Melbourne’s highest.

But its arrears rate of 1.58 per cent is now comparable with the rest of Perth.

In 2021, the Coffs Harbour and Grafton region on the New South Wales Mid-North Coast had the lowest mortgage delinquency rate of 0.38 per cent while the Northern Territory Outback had the highest rate at 2.58 per cent.

The Reserve Bank of Australia is expecting an increase in the cash rate to two per cent to cause a 15 per cent fall in property prices. 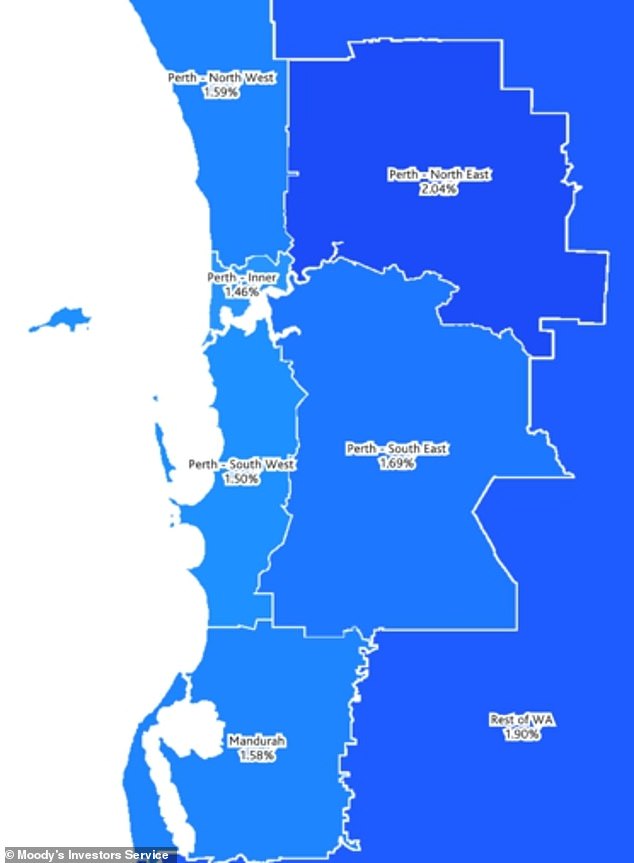 But its arrears rate of 1.58 per cent is now comparable with the rest of Perth