From ‘extreme’ liposuction to so-called ‘virginity-repair’ surgery, there are a number of cosmetic procedures British surgeons steer clear of.

But the same, risky procedures are still offered abroad.

This is especially the case in Turkey, which campaigners have nicknamed the ‘capital of butchery’.

Here, MailOnline delves into the procedures banned or considered too risky to carry out in Britain but regularly offered by Turkish surgeons.

Here, MailOnline details some of the most striking differences in some cosmetic procedures in UK and Turkey

Popularised by celebrities like Katie Price, liposuction is a procedure where body fat is sucked out of the belly and thighs to give people a slimmer look.

It is only available on the NHS to treat severe cases of conditions such as lipoedema, where an abnormal build-up of fat occurs in parts of the body.

So, Britons looking to shed pounds for aesthetic purposes have to turn to the private sector.

According to the British Association of Aesthetic Plastic Surgeons (BAAPS), which creates guidelines for UK surgery, no more than three litres of fat should be removed in a six-month period.

The body, whose council is formed of prominent UK plastic surgeons, also stresses the procedure is not a substitute for losing weight.

Often, Britons are told to shed a few pounds to get into a normal weight range for their height before a surgeon will even give the green light for liposuction.

While some clinics in the UK will perform liposuction on overweight Britons, they typically refuse to do the procedure on obese patients — those with a body-mass-index (BMI) over 30, due to the increased risk that something could go wrong.

Yet on the streets of Istanbul, Ankara and beyond, clinics will offer to remove far more fat than their UK counterparts.

They will also offer the procedure to obese Britons who normally wouldn’t be allowed to go under the knife.

Dubbed ‘extreme’ or ‘mega’ liposuction, some Turkish clinics brag about removing 15 litres of fat in a single operation on people with a BMI of 35.

Some obese Brits have even gone above this amount, with Chad Teixeira being one notable example.

A total 18 litres of fat was removed from the 26-year-old’s body in a 10-hour surgery last year.

Mr Teixeira said he originally contacted a London clinic for the liposuction, but they declined, saying his weight made the procedure too risky.

Dr Veerle Rotsaert, a plastic surgeon who operates in the capital, said ‘high volume liposuctions can be very dangerous’.

‘I’ve heard stories from patients having travelled abroad that had many litres of fat removed,’ she told MailOnline. ‘The fluid shift can be enormous and put significant strain on the cardiovascular system and kidneys.

‘Here in the UK, surgeons and even more so our anaesthetists, will generally try to refrain from removing too many litres of fat.

‘Liposuction is not a weight loss procedure. It can be a good procedure for people with a BMI below 30 who have really stubborn diet resistant pockets of fat that bother them.

‘To be a suitable candidate you need to be in good general health, have no cardiovascular diseases, kidney problems, and so on.

‘Is the candidate selection as stringent elsewhere as over here? I am not sure.’

A BBL involves taking fat from one part of the body and injecting it into the buttocks to give them a curvier appearance.

Its rise in popularity over the past decade has been attributed to women wanting a derriere mimicking that of reality TV star Kim Kardashian.

However, BBLs, also known as a surgical fat transfer, are considered one of the most dangerous type of cosmetic procedure.

At one time, it was estimated that one patient would die for every 3,000 operations carried out — making it 10 times deadlier than other invasive procedures.

For comparison, roughly one in 3,000 people will die after catching the Omicron strain of Covid according to some scientific estimates.

BBLs are considered especially dangerous because of the risk of injected fat being accidently inserted into a blood vessel.

This fat can go on to cause an embolism — a potentially deadly blockage in the flow of blood to vital organs like the heart and lungs.

Concerns about BBLs peaked in the UK following the death of mother-of-three Leah Cambridge in August 2018.

The 29-year-old died from a fat clot after paying £6,500 in cash to get a BBL at Elite Aftercare in Izmir, Turkey.

Her father, Craig Cambridge, killed himself in April 2021, with an inquest earlier this year attributing his suicide, in part, to his daughter’s death.

When announcing that review BAAPS member Bryan Mayou said: ‘The standard of care is not equivalent in every country, and by making the decision to undergo cut-price surgery, patients risk serious complications and even — as this tragic story illustrates — death.’

The results of the review were released last month and and advise British surgeons to perform a lighter version of the infamous BBL, called superficial gluteal lipofilling (SGL).

This differs in that the fat is only injected just below the skin, avoiding the dangers of fat entering the bloodstream.

BAAPS said its advice had changed because all reports of death from BBLs have been in procedures where fat was injected into the muscle layer, and therefore closer to blood vessels.

Ms Cambridge is not the only British fatality of an overseas BBL, with Melissa Kerr, a 31-year-old mental health counsellor dying in November 2019.

She was killed after a lethal blockage of fat became lodged in a blood vessel during a procedure that cost just £3,000 in Istanbul.

There are a dozen or so additional reports of Britons dying or suffering from infections and other surgical complications following their operation.

BAAPS has also raised concerns that Britons who would be deemed ineligible for BBLs in the UK due to their smoking status, BMI and possible psychological issues are being offered the procedures overseas.

Dr Rotsaert said it was an established fact that BBLs are heavily promoted in Turkey, despite the potential dangers, with dozens of clinics advertising their ability to offer the procedure to Britons online.

‘I know for a fact Turkey actively promotes these BBL’s,’ she said.

‘Whereas in the UK the official guidance from national plastic surgery associations like British Association of Plastic, Reconstructive and Aesthetic Surgeons and BAPPS is to refrain from performing them because the mortality is high when performed by non-expertly trained surgeons.’

This surgery claims to restore virginity in women by creating scar tissue in the vagina that will bleed when torn, mimicking the tearing of the hymen during sex.

Hymenoplasty, colloquially, yet wrongly, called virginity repair surgery, was banned in the UK this year over fears women and girls were being pressured to have the procedure as part of honour-based abuse present in some Muslim, Sikh, Hindu, and Orthodox Jewish communities.

It is now illegal to either offer the procedure here in the UK or arrange for it to be performed on Britons overseas.

This, in theory, means UK-based medical tourism agencies and surgeons who come to the UK for consultations cannot offer hymenoplasties to Britons.

Anyone caught doing so could face five years in prison and/or an unlimited fine.

MailOnline uncovered three agencies which listed a hymenoplasty as an available procedure.

One, Medicci Aesthetics, did not list their prices, saying it depends on the individual. 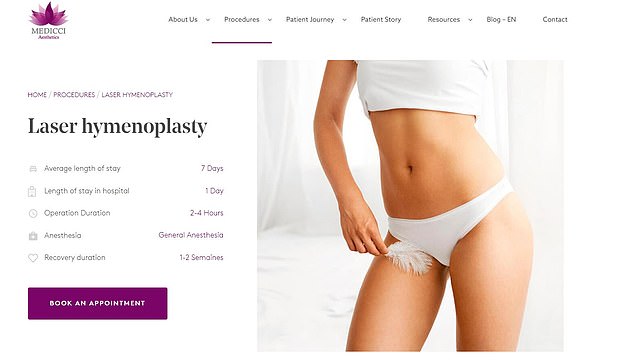 After being contacted by MailOnline, Medicci Aesthetics said that it will remove the procedure from being offered on its website.

When contacted by MailOnline, the business said the image represented a previous version of their website, and that hymenoplasty is not an offered procedure.

And ReviatlizeInTurkey offers hymenoplasty for just £1,565, and boasts this includes free breakfast and dinner for four days following surgery.

It has even listed the procedure as being available to be booked during an upcoming consultation here in the UK in Liverpool and London this month.

ReviatlizeInTurkey did not respond to a request for comment. 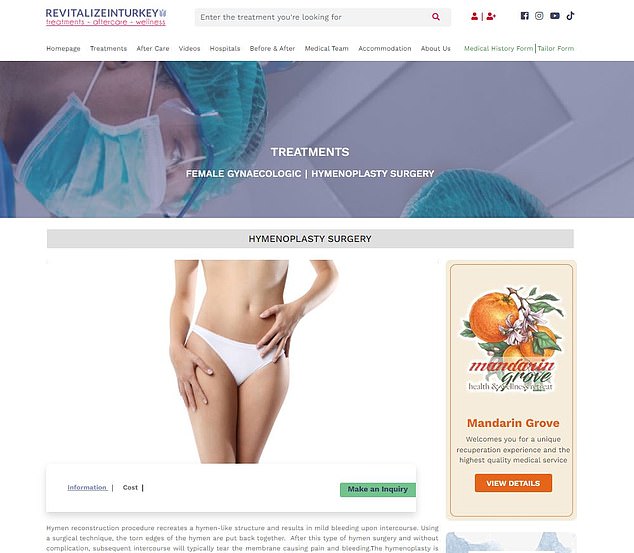 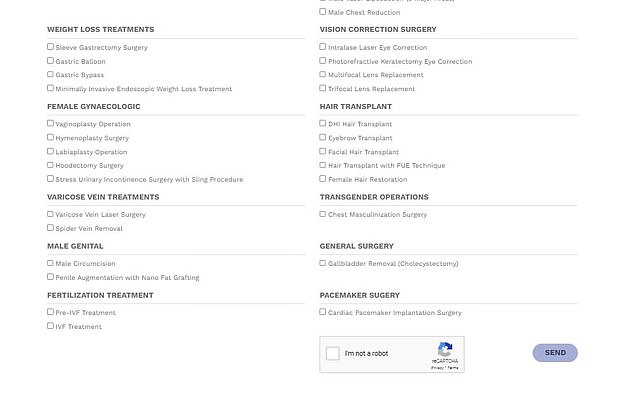 Some in-Turkey operators go even further, offering a so-called ‘super-hymenoplasty’.

They claim this produces a hymen that will produce even ‘more bleeding’ during a women’s ‘first sexual act’.

It bears highlighting that just because a woman’s hymen is torn does not mean she has engaged in penetrative sex, as the tissue can tear during sport or from tampon insertion.

The Royal College of Obstetricians and Gynaecologists (RCOG) was one of multiple organisations that campaigned for a ban on hymenoplasty in the UK.

Dr Edward Morris, its president, told MailOnline it was worrying that businesses are continuing to offer the procedure. 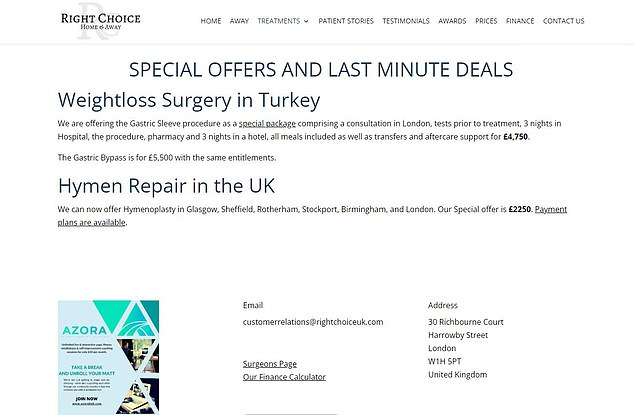 Right Choice UK previously listed ‘hymen repair’ in the UK as a special offer on its website. The company has since removed it from its website and confirmed it does not offer the procedure any more

‘We are deeply concerned with reports that there are still businesses in the UK advertising these services and carrying out these procedures, this is now against UK law,’ he said.

‘We want to send a clear message that we will inform the appropriate authorities, including the General Medical Council if we are made aware of anyone carrying out these procedures so they can take the appropriate action.’

He added that more action must be taken to stamp out the procedure.

‘Women deserve to have ownership over their own sexual and reproductive health,’ he said.

‘We are very concerned that women in vulnerable and desperate situations are being coerced or pressurised into having these procedures to prove that they are a ‘virgin’, despite there being no known medical test of whether or not a woman or girl has had sexual intercourse.’