Buckingham Palace released a new portrait of the King last night to mark the start of his reign, after the Royal Family’s period of mourning for the Queen ended.

In a clear sign that the sovereignty of King Charles will be both less formal and more closely centred on the four most senior members of the family, the new monarch is seen looking relaxed with his hand in his pocket and his arm around his wife Camilla, the Queen Consort.

Beside them are William and Kate, who also look assured but unstuffy as they contemplate their new roles as the Prince and Princess of Wales.

Buckingham Palace released a new portrait of the King last night to mark the start of his reign, after the Royal Family’s period of mourning for the Queen ended 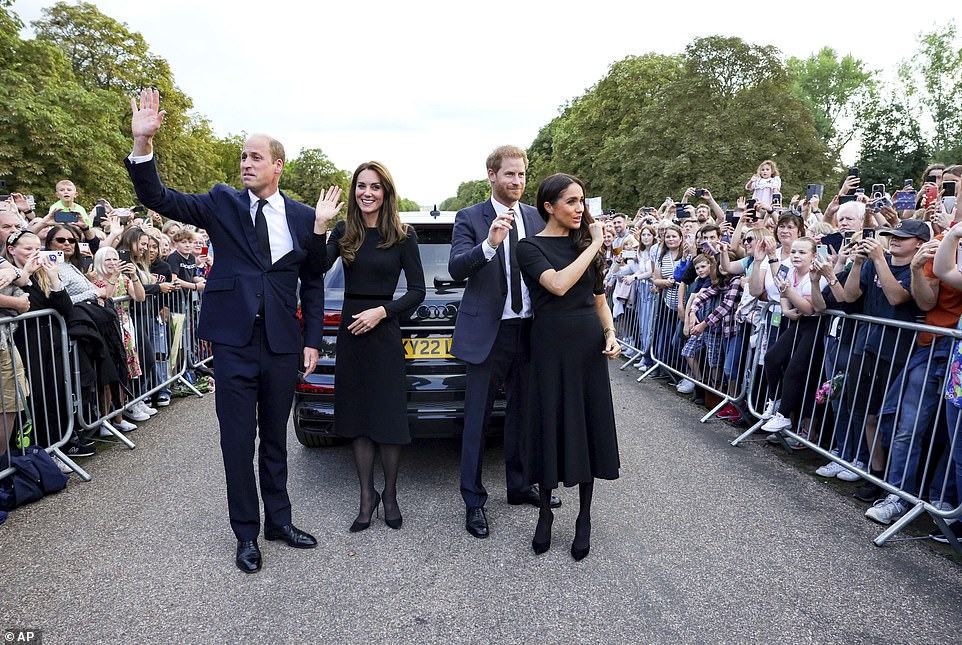 Not so long ago, it was Princes William and Harry together with their wives who had been dubbed the ‘Fab Four’ – carrying great hopes for the future of the Royal Family 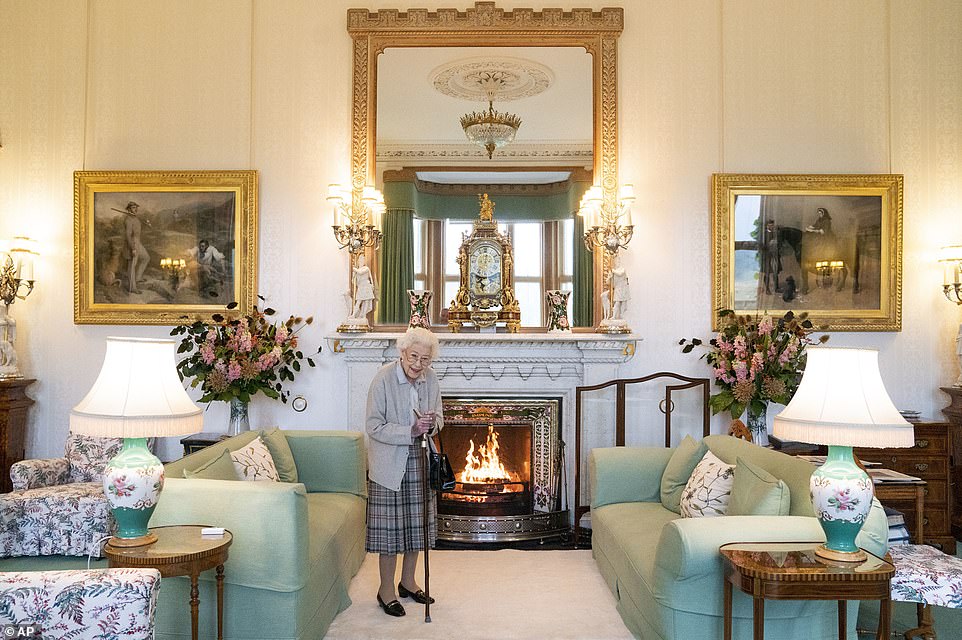 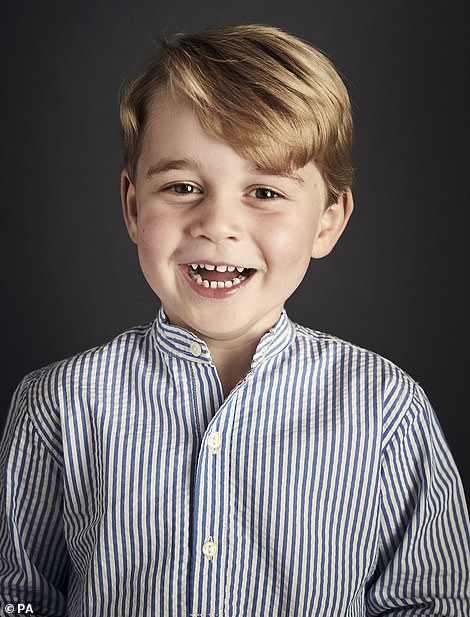 The portrait was taken by Getty photographer Chris Jackson, who was chosen by Kate and William to photograph their son Prince George on his fourth birthday

The picture, which was described by an insider as a combination of ‘formal and informal’, was taken before a reception for foreign dignitaries on the eve of the Queen’s State Funeral.

Not so long ago, it was Princes William and Harry together with their wives who had been dubbed the ‘Fab Four’ – carrying great hopes for the future of the Royal Family.

This, however, is an image of an alternative ‘Fab Four’ as the King, the Queen Consort, and the Prince and Princess of Wales stand together at the top of the Ministers Stairs before a painting of King George III at Buckingham Palace.

Despite the sadness of the occasion, a photographer had been invited to capture ‘an important moment in history’.

King Charles has made it clear that he will need to rely on his eldest son and daughter-in-law as he takes on the new role as Head of State.

In recognition of this, he appointed them Prince and Princess of Wales in his first address to the nation after ascending the Throne.

The day before the picture was taken, the King and the Prince of Wales came together for a surprise walkabout, greeting people who were waiting in the queue for Her Late Majesty’s lying-in-state.

The image was taken by Getty photographer Chris Jackson, who was chosen by Kate and William to photograph their son Prince George on his fourth birthday.

Last week the King received visiting heads of realms at Balmoral, including Ralph Gonsalves, the prime minister of St Vincent and the Grenadines, who has proposed a referendum to remove the British monarch as head of state in his country. 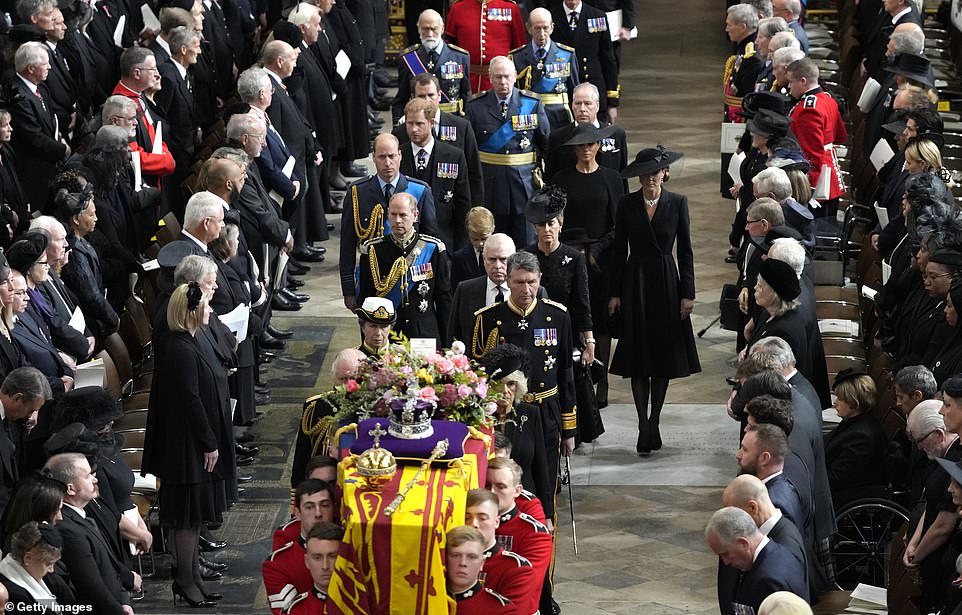 Despite the sadness of the occasion, a photographer had been invited to capture ‘an important moment in history’ 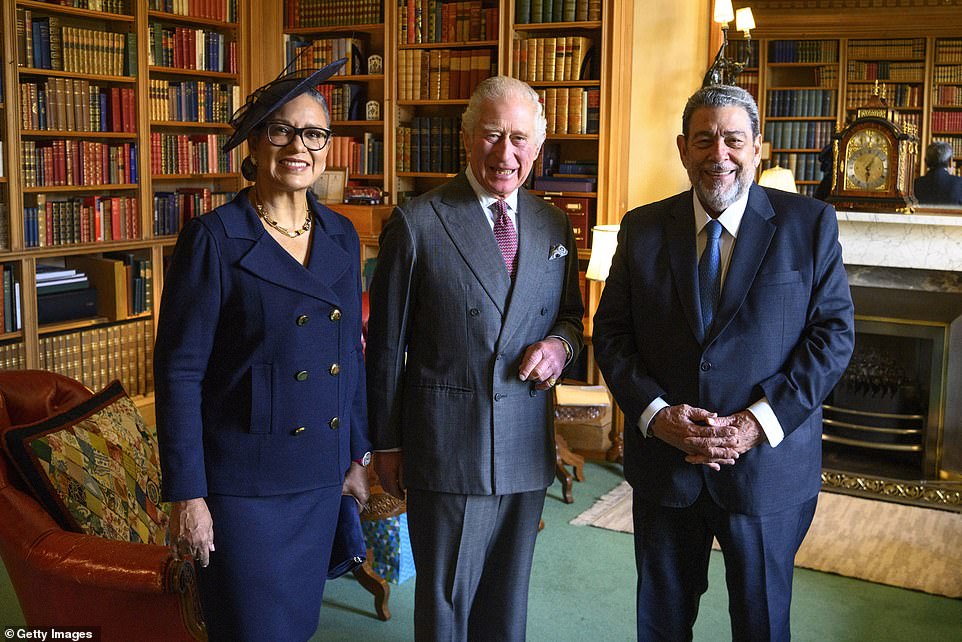 Last week the King received visiting heads of realms at Balmoral, including Ralph Gonsalves (right), the prime minister of St Vincent and the Grenadines, who has proposed a referendum to remove the British monarch as head of state in his country

The new Prime Minister has flexed her muscles by telling the new King to stay away from next month’s Cop27 climate change summit in Egypt, according to a new report.

King Charles, a renowned environmentalist, had intended to give a speech at the meeting of world leaders, but now he has been forced to abandon those plans, The Sunday Times report.

Liz Truss, herself thought unlikely to attend the Sharm al-Sheikh gathering, made her feelings clear during a personal audience with the monarch at Buckingham Palace last month.

The decision is likely to mark a rocky start to relations between the new head of government and the new head of the Commonwealth, although a Downing Street source played down the exchange, claiming the audience was ‘cordial’ and ‘there had not been a row.’

Buckingham Palace confirmed that the King will not attend the summit and said that the decision was reached in consultation without any disagreement, while a No 10 source said it was ‘ridiculous’ to suggest that the Prime Minister ‘gives orders’ to the monarch.

A source said: ‘There is no suggestion of any row. Whether members of the Royal Family attend or not is up to the Foreign Office.’

The news comes amid fears that the government is planning to water down – or abandon entirely – its environmental commitments to achieve ‘net zero’ by 2050, in light of the challenging economic situation the nation is facing. 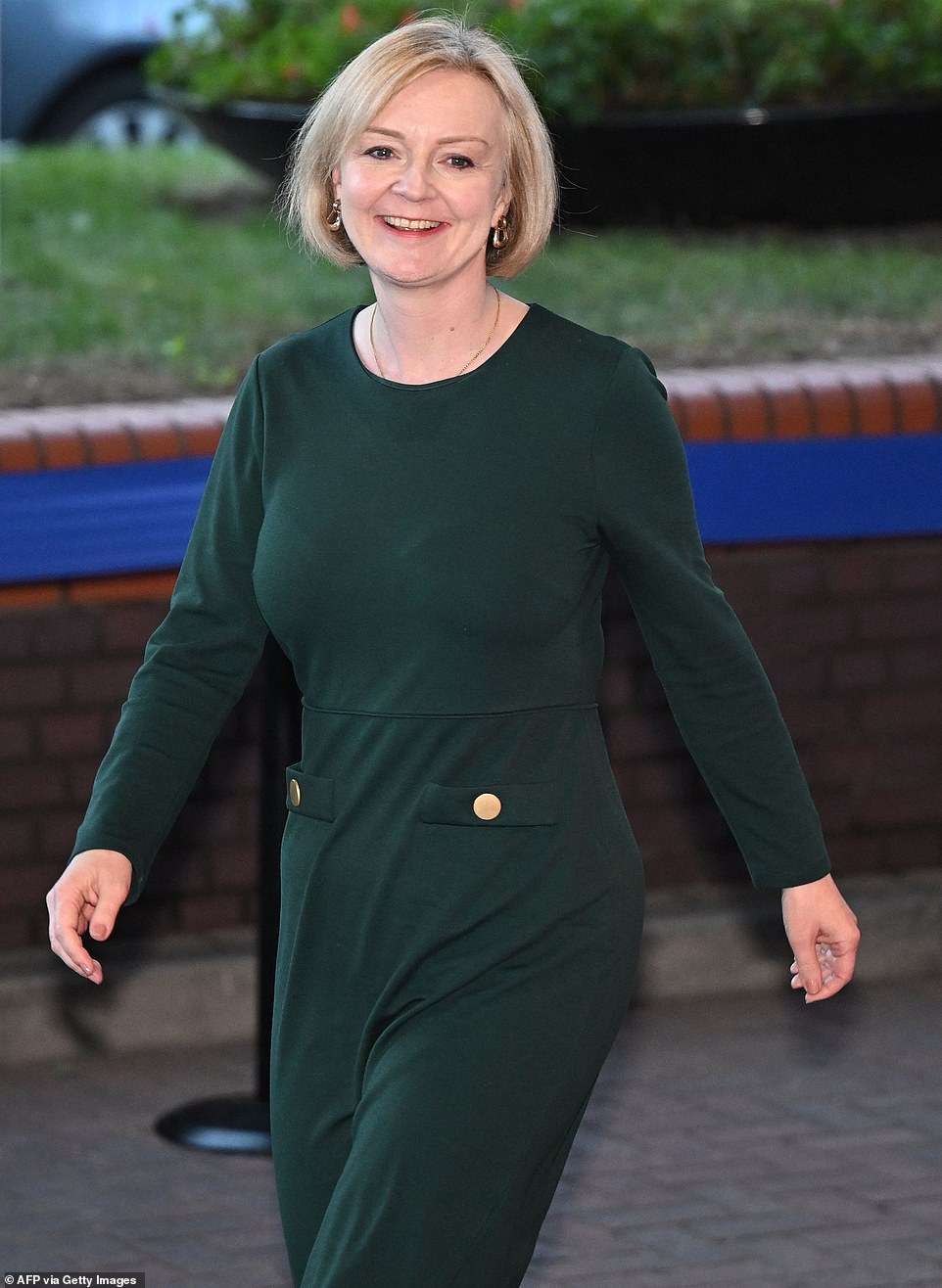 Liz Truss arriving at her hotel ahead of the annual Conservative Party Conference in Birmingham. The new Prime Minister 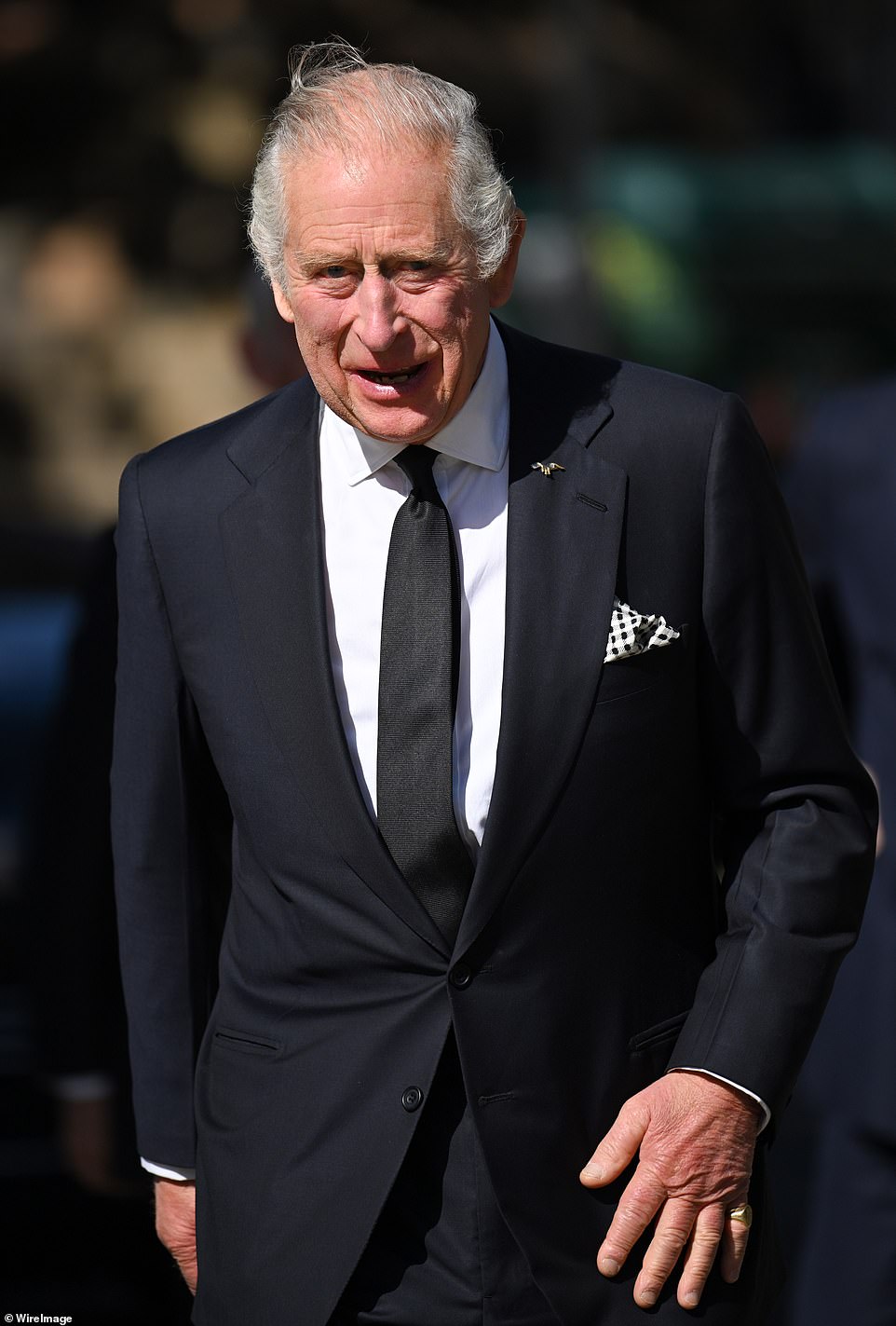 Before he ascended the throne, there had been speculation, that, as Prince of Wales, he would go to Egypt having attended the Cop26 summit in Glasgow the previous year.

A senior royal source confirmed that the King had been invited to go. Nevertheless, by convention all overseas official visits by members of the royal family are undertaken in accordance with advice from the Government.

It is understood however that after he consulted with the government, it was agreed that this would not be the right occasion for Charles to make his first overseas visit as sovereign.

‘He had to think very carefully about what steps to take for his first overseas tour, and he is not going to be attending Cop,’ the source said.

This source added that the decision was made on the government’s advice and was ‘entirely in the spirit of being ever-mindful as King that he acts on government advice’.

A No 10 spokeswoman said: ‘We do not comment on meetings between the Prime Minister and the King.’

Despite his acquiescence to Truss, the King is still keen to make his mark on the summit, which is due to run from November 6 to 18.

A senior royal source said: ‘Just because he is not in physical attendance, that doesn’t mean His Majesty won’t find other ways to support it,’ and that how he will do it is  ‘under active discussion.’

The Sunday Times quote a source who ‘knows Charles’ and said that the King would be ‘personally disappointed not to go.’

Charles had engagements planned around his Sustainable Markets Initiative (SMI), which aims to persuade businesses to invest in environmentally friendly initiatives.

The source was critical of the government’s decision to bar the new King from attending the meeting after the Queen gave an ‘entirely non-political address’ at Cop last year. 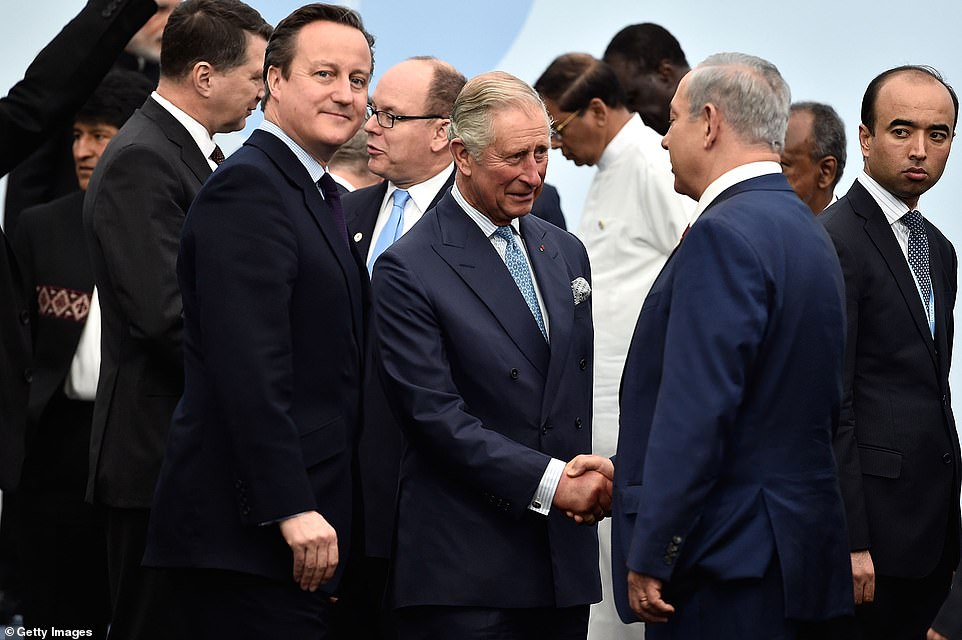 King Charles – then Prince –  shakes hands with Israeli Prime Minister Benyamin Netanyahou before the family photo at COP 21 on November 30, 2015, where the King delivered a speech on climate change calling on world leaders to adopt a war footing to tackle with problem

Can Prince Harry’s memoirs be stopped? Palace aides discuss whether they can block the Duke’s book

Palace aides have been discussing ways to stop Prince Harry publishing his memoirs.

There is said to be deep concern that the book will contain damaging revelations despite suggestions that he is seeking to tone it down.

It is part of a presidential- style strategy launched by aides that will focus on the crucial first 100 days of the reign.

A friend of the King said: ‘The question inside the Palace is: “Can the book be stopped?” It may be that even Harry can’t stop it at this stage but the feeling at the very top is that there’s no good that can come of airing grievances in public.’

Lawyers to the Royal Family at the firm Harbottle and Lewis are expected to be on standby to read the book when it comes out.

But it is highly unlikely the King would wage a legal battle against Harry, whose £36 million deal with Penguin Random House may mean he is unable to stop it. It comes at an important time in the King’s reign.

A Palace source said: ‘His Majesty will build on the points he has expressed to the nation: now that the period of mourning is over, he will support diversity, promote community spirit and protect the space for those with faith and those without.

‘He is mindful that, as King, his interests and passions will continue but that… some of his previous commitments will now continue in the trusted hands of others.’

‘The King could absolutely go and deliver the government’s message and give it credibility, given all the kudos he has in that space,’ the source said.

‘It’s disappointing if people don’t believe he’d be able to do that, of course he could. He delivered the Queen’s speech at the state opening of parliament, rattling off lots of policies that went against his personal beliefs.’

Charles delivered a speech at the Paris Cop21 in 2015 which called for a ‘vast military-style campaign’ to fight climate change and urging world leaders to commit ‘trillions, not billions, of dollars’.

He then gave a similar speech at the opening ceremony of Cop26 in Glasgow, again likening the threat of climate change to a world war.

In a video address to the conference last year, the late Queen hailed his work. ‘It is a source of great pride to me that the leading role my husband played in encouraging people to protect our fragile planet lives on through the work of our eldest son Charles and his eldest son William,’ she said. ‘I could not be more proud of them.’

In his first address to the nation and the Commonwealth as King, Charles promised to ‘uphold the Constitutional principles at the heart of our nation’ and to ‘hold in the greatest respect the precious traditions … and responsibilities of our … system of parliamentary government’.

Part of this, he conceded, would mean that he would no longer be able to campaign on issues that he holds dear – thought to be environmental concerns.

Before his elevation to King, Charles had a reputation for interfering in political matters in aid of these concerns, which many considered overstepping his prerogative to stay out of government business.

It is thought that he – privately – would be very concerned about the new governments’s intentions with regard to climate policy.

Last month Truss appointed the Conservative MP Chris Skidmore to lead a review of the government’s net-zero policy, suggesting that she is not satisfied with it in its current form.

It is thought the government is eyeing the controversial and politically sensitive energy extraction form of fracking as a means to east the energy crisis facing the country.

The government also set out plans to ease planning laws, reduce regulations for oil and gas exploration and throw out environmental rules on water and chemical pollution.

The government has, however, pushed back on fears that it could throw out the 2050 net zero goal.

Skidmore said he could ‘100 per cent’ rule out the prospect of his report making that recommendation.