When Anton Derlyatka told his 86-year-old mother, Galina, he was going to create a marketplace in which people’s footsteps would be their currency, she immediately understood the concept.

Yet I’m finding it baffling as I pace breathlessly down my street in order to amass steps that Anton, the 49-year-old chief executive of London tech firm Sweatcoin, really has turned into something I can spend.

‘She got it straight away, but some take a bit longer,’ he says.

Walk and save: Since its launch in 2016, 900 million people worldwide have downloaded the Sweatcoin app… and this number is set to rocket further

‘It can be difficult to take in at first, because people often think there’s a catch; they’ve been told that if something seems too good to be true, then it probably is. But, in our case, it’s not.’

The idea behind Sweatcoin’s steps-for-money smartphone app — once you get it — really is quite simple.

Many of us already have gadgets or apps that count our steps. And the more you walk, the better you feel about yourself. But apart from that warm glow, you get nothing for your effort.

With Sweatcoin’s app, you are awarded one ‘Sweatcoin’ for every 1,000 steps you take.

And with these coins you can buy products or earn discounts on goods and services from more than 600 companies — from Reebok to Apple — all vying for your business. It’s a bit like Air Miles for feet.

The idea has become so popular that since its launch in 2016, 900 million people worldwide have downloaded the app.

Anton, a life-long fitness fanatic, says he and his business partner, consumer tech expert Oleg Fomenko, came up with the idea of incentivising exercise in 2015 after delving into behavioural science and realising the power of ‘nudging’ people in the direction of better habits. They describe what they came up with as the ‘economy of movement’.

‘The problem is, we don’t want to do exercise — we find it a chore — because in nature, our bodies were made to preserve energy, not burn off calories,’ Anton says. ‘With Sweatcoin, we found a way to incentivise people to get up and walk.’

The timing could hardly be better. In May, Cancer Research UK issued a report predicting that nearly 40 per cent of all adults in the UK would be obese by 2040.

The NHS spends £10 billion a year on treating type 2 diabetes — a figure predicted to rise to £16.9 billion by 2035 unless we all get more active.

‘The NHS has a diabetes prevention programme that encourages people to exercise more and reduce their body weight by 6 per cent,’ says Anton.

‘Unfortunately, only 27 per cent of people who start the programme finish it. But last year we conducted a trial with the NHS using Sweatcoin, and among 270 participants that figure jumped to 87 per cent.

‘Translated across the UK, that could have an enormously positive impact.’

I tried the app for a few days and amassed 40 sweatcoins.

There is a free plan on the app, which allows you to earn up to ten sweatcoins a day, and a £4.99-a-month premium membership in which you can earn 100. 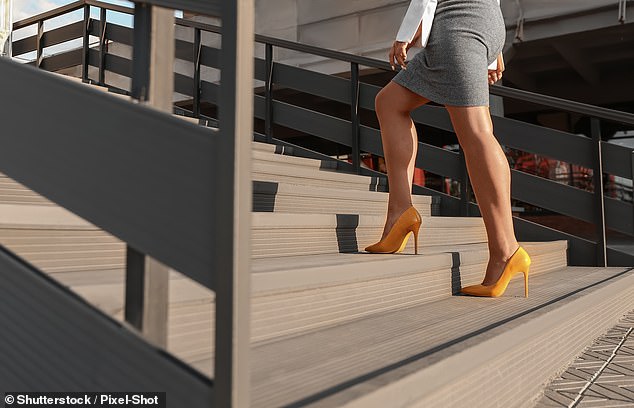 Hot stepper: Sweatcoin’s app awards one ‘sweatcoin’ for every 1,000 steps you take. It can be used to buy products or earn discounts on goods and services from more than 600firms

Part of the app is a marketplace where you can buy, or enjoy discounts on, a range of products from cosmetics, jewellery and Amazon vouchers to wireless earbuds, subscriptions for magazines and fitness classes.

Some of these require you to sign up for a trial period, or to pay what seems like inflated postage costs, but there are also some bargains.

Recent offers have included 35 per cent off Reebok products in exchange for 25 sweatcoins; three months’ subscription to the Tidal music streaming service for free; and a Sonos One smart speaker for 4,000 sweatcoins.

And 30 of my sweatcoins could have bought some Plant Dpt day cream, while 20 would have entitled me to a £5 Amazon voucher — as long as I signed up for Snoop, an app that monitors your spending and offers you advice on saving money.

Or, as many users do, you could simply donate your sweatcoins to charity. How much that would be worth is difficult to say.

One reviewer in January worked out that a coin was worth about £0.04, but that will change over time — and with the introduction of SWEAT crypto, a cryptocurrency you can earn simply by walking.

This summer, the company will host a ‘Token Generation Event’ to launch its digital currency, where walkers will be awarded one new SWEAT crypto token per sweatcoin already earned by walking or running — without losing their sweatcoin balance.

It is estimated some 860 million SWEAT crypto tokens will be given away in total. And unlike other cryptocurrencies such as Bitcoin, whose values have crashed of late, there is no risk as no money changes hands.

Users will then be able to spend this currency on the aforementioned Sweatcoin partner brands, or donate it to charity.

Over time, and as the currency appreciates in value, more and more steps will be needed to generate a SWEAT token, encouraging users to keep up with their exercise regimes.

And, in future, advertisers who want access to the company’s vast membership will have to pay the firm in SWEAT, which will reinforce its value even further.

It sounds complicated, but all you really need to do is enjoy a good stroll.

Nobody yet knows quite how much a SWEAT token will be worth on the open cryptocurrency trading market, but the thought is exciting. Sweatcoin has been the most downloaded app in more than 30 countries.

Of course, the big question is whether Sweatcoin encouraged me to exercise more than I already do, and the answer is: yes.

Its rewards are relatively small, but it’s fun to earn something in return for getting off the sofa and out into the fresh air. And besides, one day, the SWEATS I’ll receive later this summer just might make me a gazillionaire.