Dr Anthony Fauci, President Donald Trump and the founders of Black Lives Matter have been named to TIME magazine’s 2020 list of the 100 most influential people in the world.

In a tribute to the ‘woke’ heavyweights of the last year, BLM founders Patrisse Cullors, Alicia Garza and Opal Tometi were joined on the annual list by Gabrielle Union and Dwyane Wade who were praised for raising their transgender daughter Zaya while soccer player Megan Rapinoe was hailed for her LGBT rights advocacy.

Fauci was praised by late-night TV host Jimmy Kimmel for ‘refusing to be pressured by politicians’ after the virologist’s frequent clashes with Donald Trump over the federal government’s response to Covid-19.

The list came with a video message by 2018 honorees Prince Harry and Meghan Markle, who urged voters to turn out in the November election in what critics said was a thinly-veiled show of support for the Democratic ticket.

Dr Anthony Fauci, the nation’s leading infectious disease expert, was named to TIME magazine’s 2020 list of the 100 most influential people in the world 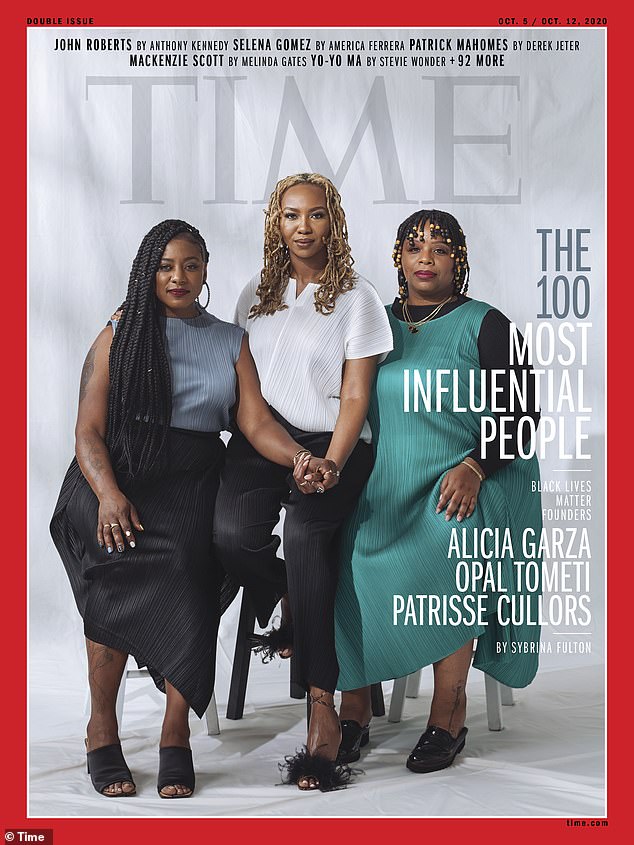 Jimmy Kimmel penned the biography for Fauci, the nation’s leading infectious disease expert who was thrust into the spotlight this spring as a member of the White House Coronavirus Task Force.

‘He delivers the truth, as difficult as it may be to hear, earnestly and with one goal: to save lives. His courage and candor have earned our trust. We are all fortunate to have a man of his wisdom, experience and integrity to help us navigate these difficult waters,’ Kimmel wrote.

Their biography was written by Sybrina Fulton, the mother of Trayvon Martin, a black 17-year-old who was shot dead by a white security officer in Florida in 2012.

‘There are only three of them, but they are everywhere,’ Fulton wrote. ‘They are getting people to think: What if you had a 17-year-old son in a hoodie, and no weapon, just a candy and a drink, and now he’s dead on the ground? What if your daughter was sleeping in her own bed and the police knocked down the door and killed her? How would you feel? That is what “Black Lives Matter” asks.’

Leading the ‘Artist’ category with cover features were Megan Thee Stallion and The Weeknd.

Actress Taraji P Henson had nothing but praise for Megan in her description, writing: ‘I don’t like to put the stigma of the word “Strong” on Black women because I think it dehumanizes us. But Megan — she’s got a strength. She is the epitome of tenacity.’

Elton John praised The Weekend, whose real name is Abel Tesfaye, in a brief blurb, calling him ‘a mysterious figure in an era when mystery is rare in pop. You never know what to expect next.’ 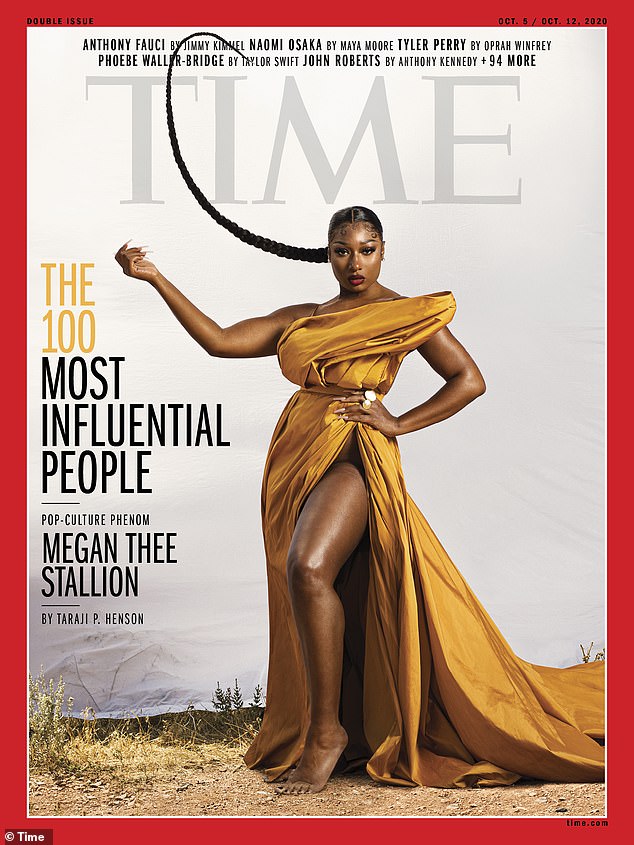 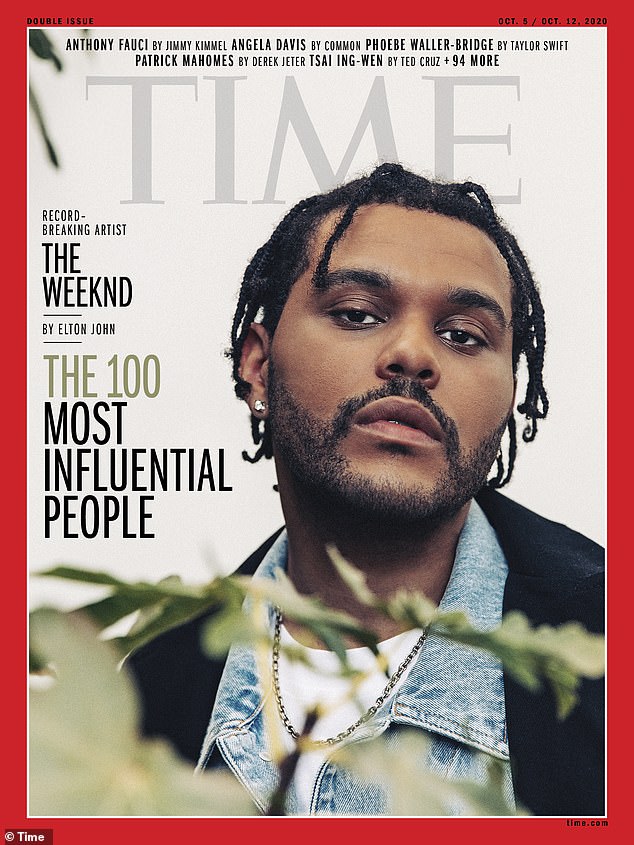 Elton John praised The Weekend, whose real name is Abel Tesfaye, in a brief blurb, calling him ‘a mysterious figure in an era when mystery is rare in pop. You never know what to expect next’

Amy O’Sullivan, a 18-year veteran ER nurse at Wyckoff hospital in Brooklyn, made the list as a representation of all front-line workers who have risked their lives during the pandemic.

O’Sullivan treated the first COVID-19 patient at her hospital, who also became the city’s first death in early March.

Amy is just one of the millions of health care workers worldwide who risked everything to service others,’ Emmy-winning journalist Katie Couric wrote.

Gabrielle Union and Dwyane Wade graced a cover together, each with their own biography.

‘With his support for his daughter Zaya, who is transgender, Dwyane has set a powerful example for parents and for society of how to be good allies to young people who are figuring out who they are,’ musician John Legend wrote. 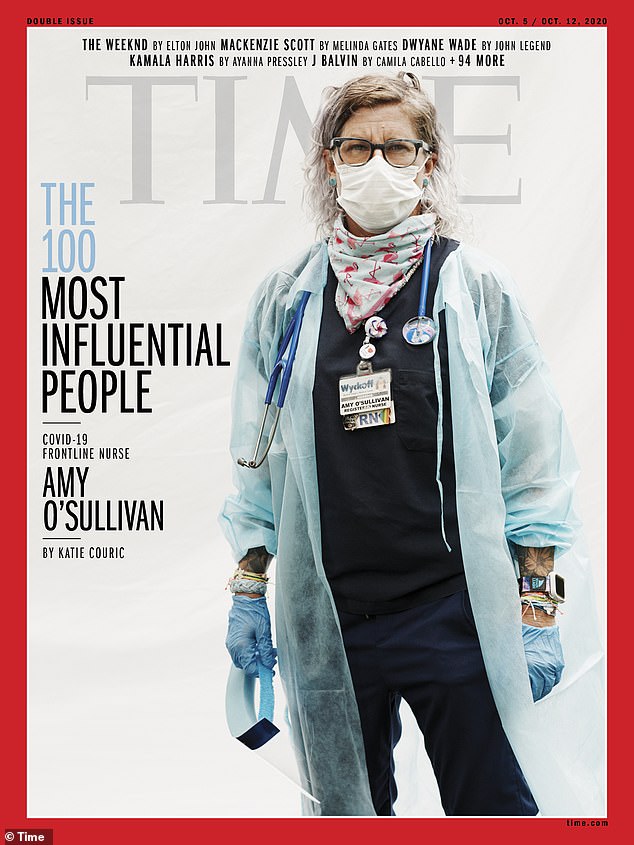 Amy O’Sullivan, a 18-year veteran ER nurse at Wyckoff hospital in Brooklyn, made the list as a representation of all front-line workers who have risked their lives during the pandemic 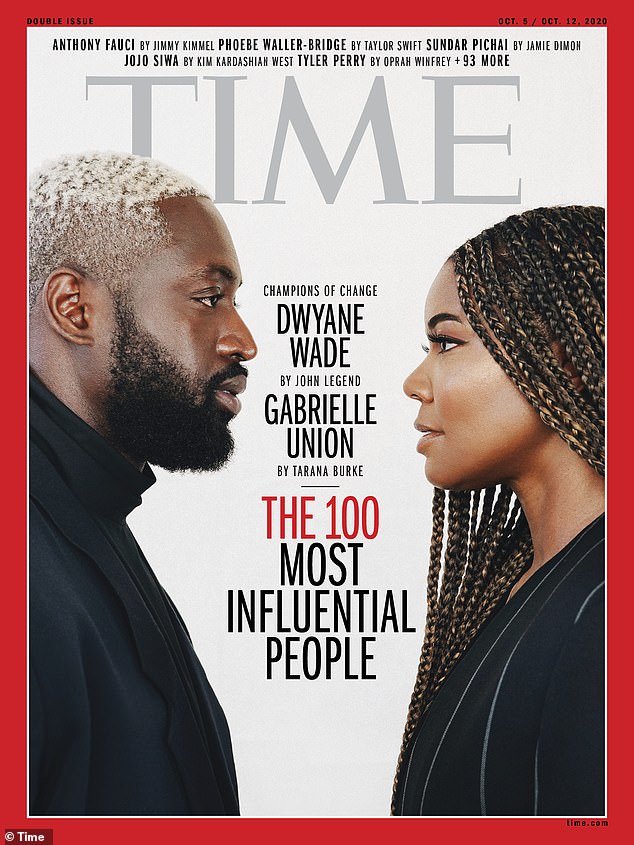 Gabrielle Union and Dwyane Wade graced a cover together, each with their own biography.

President Trump also made the list for the fifth year in a row, along with his presidential rivals Joe Biden and Kamala Harris, his attorney general William Barr and House Speaker Nancy Pelosi.

TIME’s senior White House correspondent Brian Bennett wrote a particularly scathing biography for Trump, writing that he ‘downplayed the severity of COVID-19 early on, refused for months to wear a mask and pressured government scientists to change their recommendations, as the virus spread to eventually kill more than 200,000 Americans’.

Bennett called Trump’s presidency ‘norm-shattering’, adding: ‘Voters will decide on Election Day whether Trump’s use of power will be a cautionary tale or a preview of more to come.’

Another White House correspondent for TIME, Tessa Berenson, penned the description for Barr, focusing on how the attorney general has taken on a role as protector of Trump.

‘It’s not clear whether Barr is guided by fealty to Trump or a belief in sweeping Executive power,’ Berenson wrote. ‘Either way, he has proved himself a top defender of the scandal-plagued President.’

Biden’s blurb, written by South Carolina Congressman Jim Clyburn, describes the Democratic presidential nominee as ‘honest, compassionate and empathetic – but most of all, he is a public servant.’

Like most Americans, Joe Biden knows hardship; he knows disappointment; he knows sacrifice and moments of contentment,’ Clyburn wrote.

‘It’s one thing to run to lead a country at its high point, but I believe it speaks volumes to Joe’s character that he will fight to lead us through these.’

‘Kamala every day embodies the beliefs and expectations of little girls and young women who see themselves in her,’ Pressley wrote.