Australians Matthew Ebden and Max Purcell have launched a remarkable comeback to down the top seeds and claim a place in the men’s double final at Wimbledon,

Now they will be looking to atone for the Australian Open dismantling they received earlier this year.

The Aussies were two sets behind top seeded Brit Joe Salisbury and American Rajeev Ram before launching a brave fightback to claim a 3-6 6-7(1) 7-6(9) 6-4 6-2 victory and book their place in the decider.

The all-Aussie duo stared down five match points in a pulsating third set before kicking on to claim a famous victory.

They will play Croatians Nikola Mektic and Mate Pavic in the final.

Individually, it is the first time an Aussie has reached the men’s doubles final in seven years while the last time an All-Australian duo reached the decider was back in 2000 when ‘The Woodys’ Todd Woodbridge and Mark Woodforde claimed their sixth consecutive final.

Their result comes after the all-Australian duo of Nick Kyrgios and Thanasi Kokkinakis were forced to withdraw from the doubles so that Kyrgios could focus on the singles.

Kyrgios will line up in the men’s single final against Novak Djokovic tomorrow.

Kyrgios and Kokkinakis famously beat Ebden and Purcell in the Australian Open doubles final in a massive boilover.

The Aussies traded barbs on social media at the time and Kyrgios called Purcell a ‘donut’.

‘Regarding your comments after the match, you clearly have no idea about entertainment and sport,’ Kyrgios posted at the time. 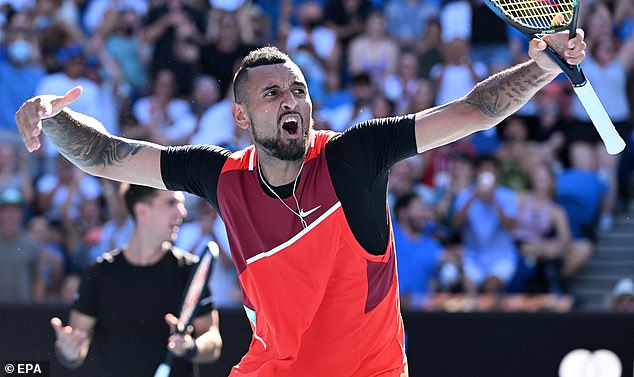 ‘If you haven’t noticed there is a reason why people actually come to my matches, it’s because the level and my game are actually worth watching.

‘Next time you lose another slam final, you should just put your head down and try to figure out how to play the big points better.

It was a mixed day for Ebden at Wimbledon, celebrating because he made the men’s doubles finals but also left to rue what could have been in the mixed doubles.