Just what is it that greets our bags when they vanish through the check-in flaps into the twilight zone beyond? The first thing which strikes me is the absence of people and the relative peace and quiet. There is just a constant hum, like a ship’s engine.

I am standing immediately below the central bank of check-in desks in the busiest terminal of the busiest airport in Europe: Terminal 5 at Heathrow.

I have come to Britain’s flagship airport to see the scale of the challenges facing an aviation industry frantically trying to keep up with renewed demand for flying — and the ensuing chaos. Baggage is just one of many.

Belting job: Robert Hardman in the bag storage area at Heathrow’s Terminal 5 – the busiest terminal of the busiest airport in Europe

No sooner has each bag cleared the rubber flaps in the departure hall than it drops down to join more than 20 miles of conveyor belt — in Terminal 5 alone.

The computers already know what is going where. All bags have a digital tag, just like the paper tag around the handle.

Each one heads for the ‘tipper zone’, which leaves every case lying flat in order to optimise its exposure to one of the 23 huge X-ray machines.

Here, everything is scanned by machine and also by remote teams of security experts. Even a toy water pistol will be enough to have a bag diverted for a closer look. 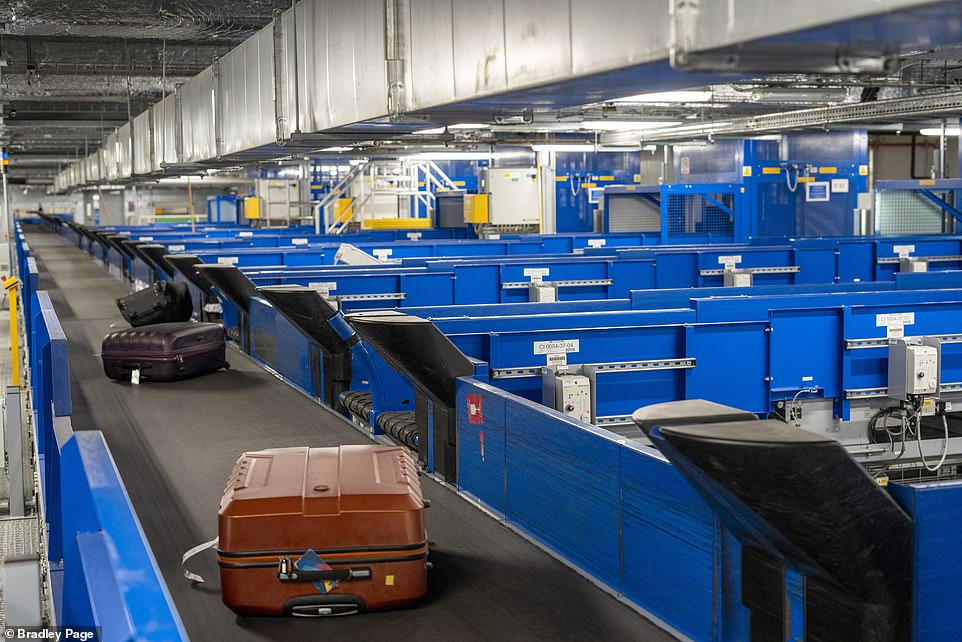 Baggage below the central bank of check-in desks. ‘The computers know what is going where. All bags have a digital tag, just like the paper tag around the handle,’ says Robert 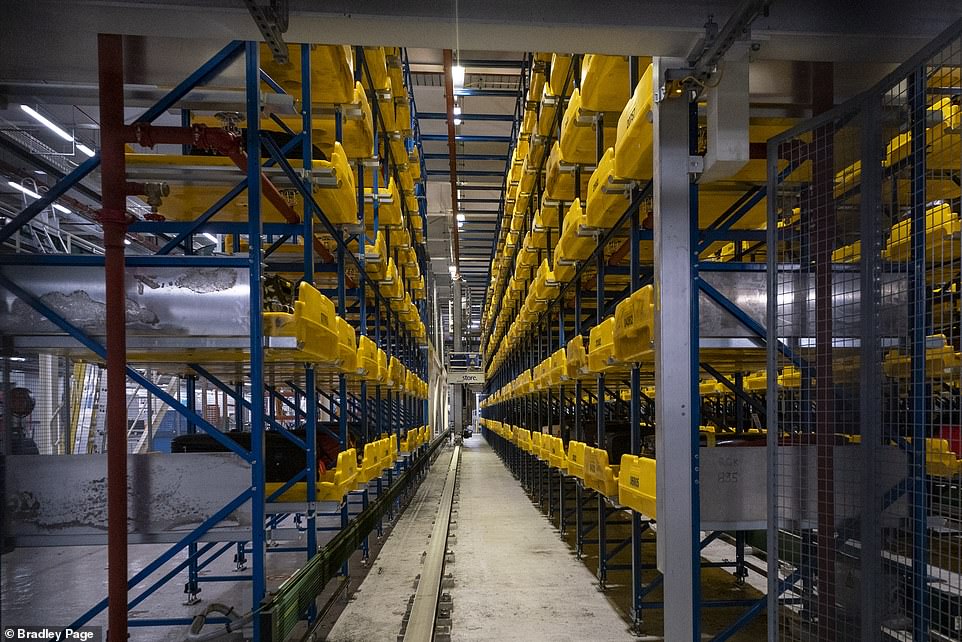 Everything then heads for the ‘sorter’ — a high-speed rotating loop. Each bag whizzes along until it reaches its allotted chute and drops down into a metal skip on wheels called a ULD (unit load device).

At this point, a human hand intervenes for the first time, putting the heaviest stuff at the bottom. When the ULDs are full, these staff then tow them off to be slotted, fully laden, inside the plane.

A shortage of ground crew like these has led to severe problems in recent weeks. Many simply didn’t come back to this line of work after the pandemic. They are not employed by the airport but by airlines or third-party contractors, and many of those are still struggling to fill the gaps.

Further down the track, I find a luggage tunnel linking up to other terminals. It’s like a rollercoaster ride for suitcases, as each new one flies up a ramp at 20mph and is then spat out into the system. 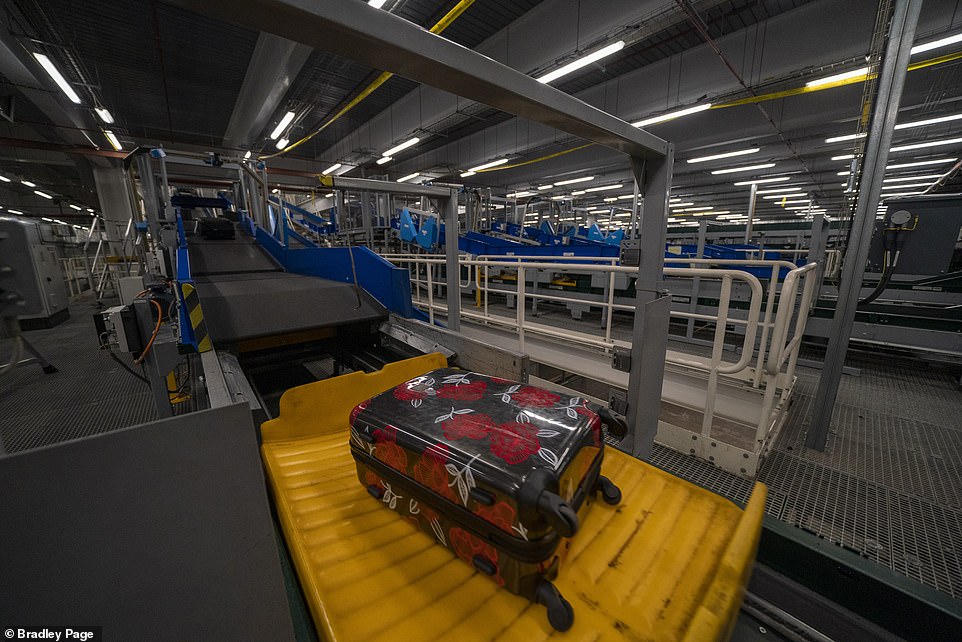 Above, bags move through the ‘tipper zone’, which leaves every case lying flat in order to optimise its exposure to one of the 23 huge X-ray machines 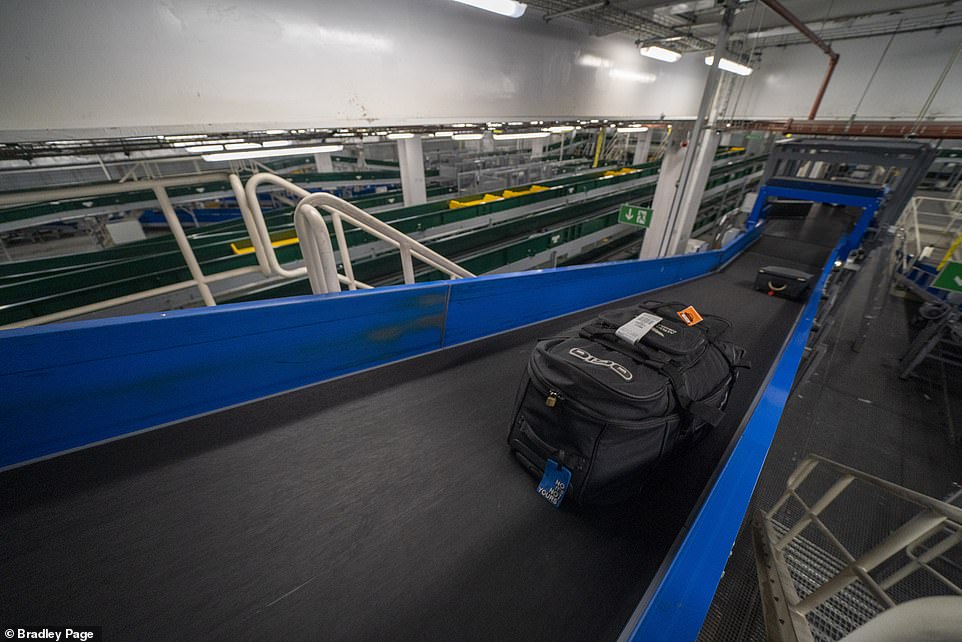 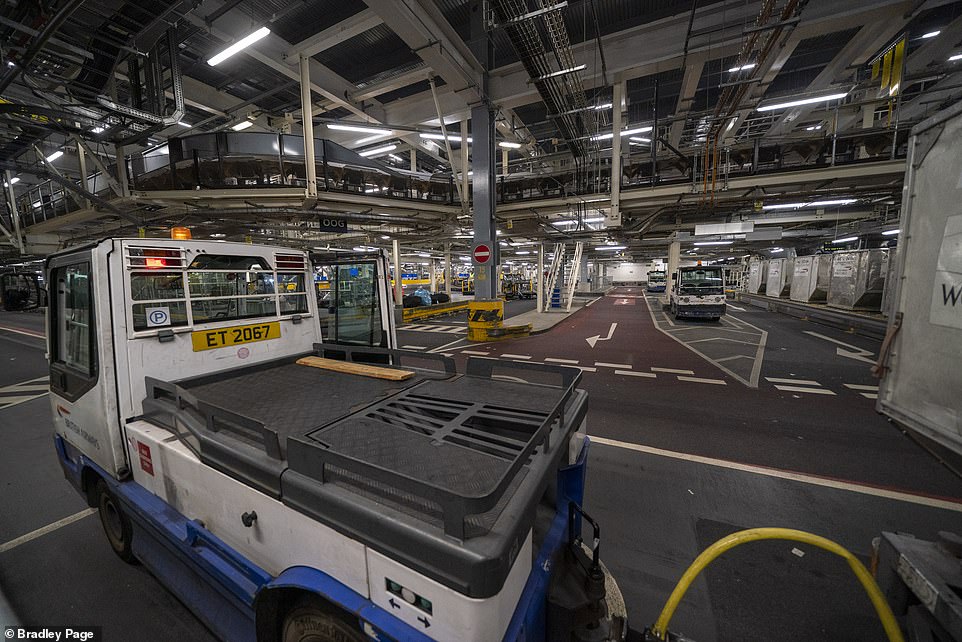 Inside the baggage area. Robert notes that baggage is ‘just one of many’ challenges facing an aviation industry frantically trying to keep up with renewed demand for flying

Stefano Villaverde, Heathrow’s head of baggage operations, points out that, pre-pandemic, 99 per cent of bags left Heathrow with the right passenger. At present, that figure is 96 per cent. Almost all, however, are in transit, checked in somewhere else and bound for somewhere else.

I ask him for a few expert travel tips. Any advice on tracking down a missing bag? ‘A bright pink case with a unicorn on the side will be easier to find than a black holdall,’ he says, adding that his own holiday bag is a blue hard case with red handles.

Compared to all the wizardry devoted to outbound bags, the inbound system is astonishingly simple. Convoys of trolleys are towed from the plane to the rear of the baggage hall where I find a man with a suction hose lifting each bag onto the belt which rotates through to the hall. 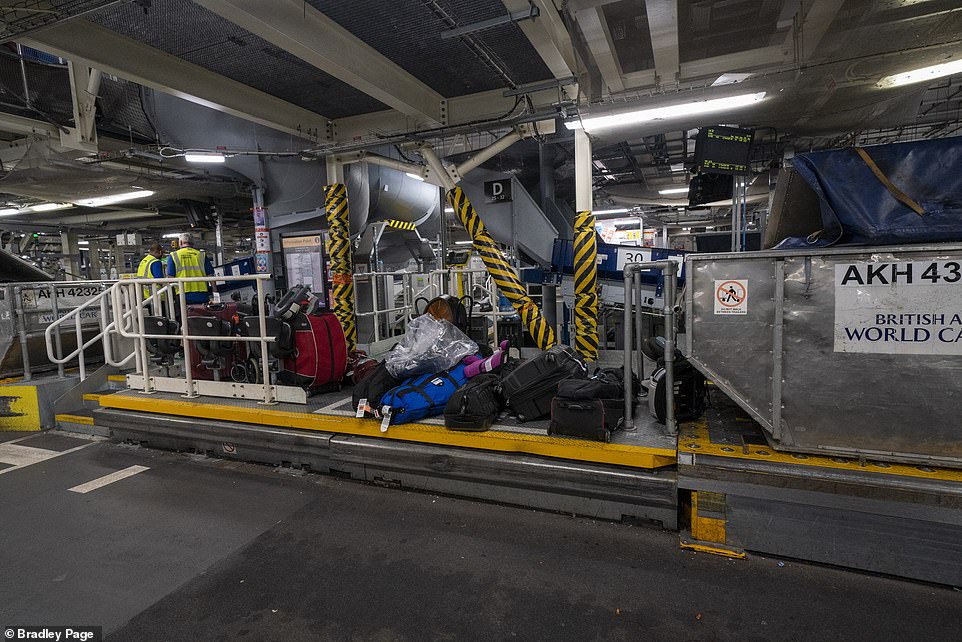 Above is the baggage make up area, where luggage is sorted for delivery to outbound planes 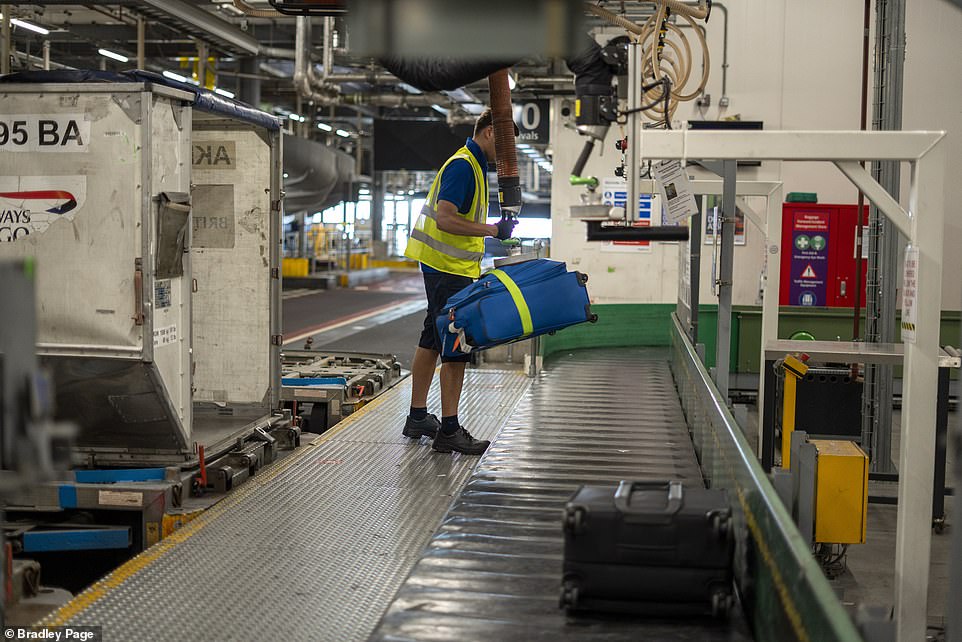 ‘Compared to all the wizardry devoted to outbound bags, the inbound system is astonishingly simple,’ says Robert. Above are bags arriving at the airport

Problems occur when there is a sudden glut of late arrivals, which means there are not enough people to tow the trolleys or hold the hose at a given moment.

Back in the terminal, I find that in the space of just a couple of hours long queues have formed — notably those for security, which are tailing back to overspill areas.

Two things are keeping the peace. One is a team of Heathrow staff in pink shirts who are policing the queue and explaining the wait time (half an hour).

The other is the team of ‘queue-combers’. They walk up and down the lines shouting that anyone due to fly within the hour should identify themselves for priority treatment.

Here on the shop floor, I join Heathrow’s chief executive John Holland-Kaye on his morning rounds. He has spent much of the week on the airwaves, explaining that when things go wrong at airports, it is down to multiple factors. ‘This is actually an overly complex ecosystem,’ he says. 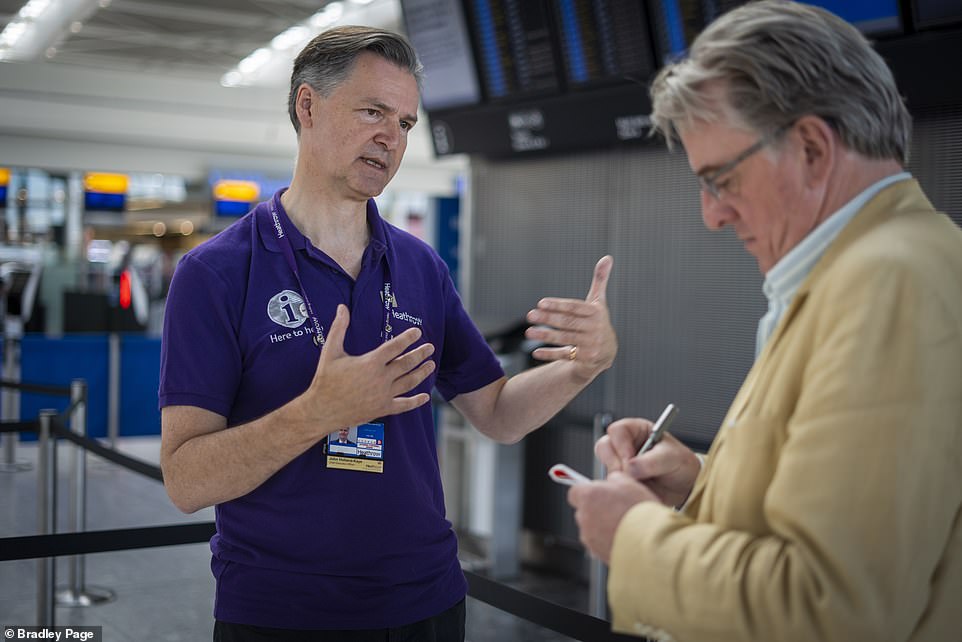 Staff handle flights according to pre-planned schedules. There is only so much room for manoeuvre if dozens of aircraft suddenly turn up late — or if an eco-protest on the M25 stops handlers and cabin crew arriving on time.

‘Only 50 to 60 per cent of flights are arriving here punctually and that creates huge problems,’ says Mr Holland-Kaye.

One reason for that is a bottleneck in the clouds. There is a shortage of safe air space, with Ukraine, Belarus and Russia now off-limits. The pandemic also encouraged a lot of European air traffic controllers to opt for early retirement before enough replacements were trained up (the apprenticeship takes around three years). 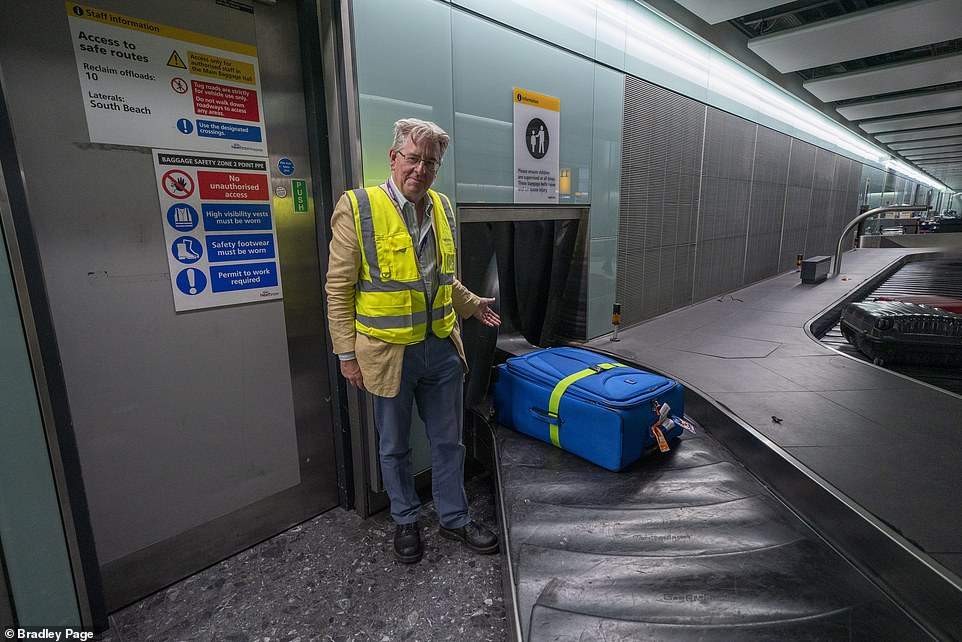 Robert at the baggage carousel at arrivals. Stefano Villaverde, Heathrow’s head of baggage operations, gives him tips on tracking down a missing bag. ‘A bright pink case with a unicorn on the side will be easier to find than a black holdall,’ he says 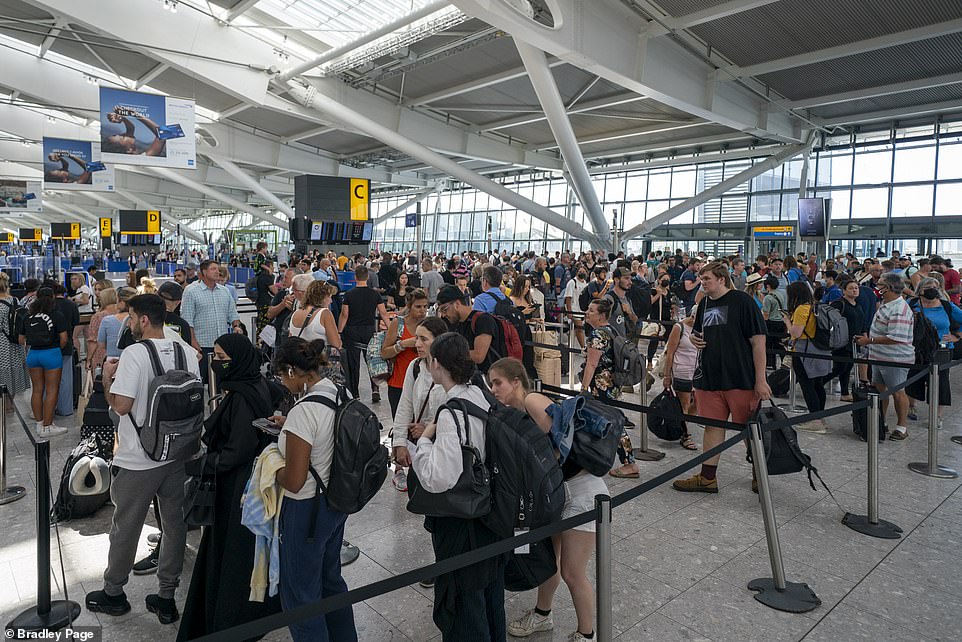 ‘Airports perform exactly the same task as plumbers. When stuff flows normally, you don’t notice it. Just one small blockage, however, can quickly start backing up,’ says Robert. Above are queues at Heathrow Terminal 5

It is worth remembering that Britain is actually doing quite well. Mr Holland-Kaye says his outbound daily passenger cap of 100,000 (down from the usual summer average of 104,000) is far in excess of other giant European hubs.

Though Gatwick has capped flights (down from a pre-pandemic August average of 950 per day to 850), it is beating most European rivals.

Ultimately, all travel is down to flow rates. Airports perform exactly the same task as plumbers. When stuff flows normally, you don’t notice it. Just one small blockage, however, can quickly start backing up. And if it’s not sorted promptly, the result can be very expensive — and very messy. As we have discovered.