Just before dawn a moon like a burning orange balloon appears, its reflection gilding our pilgrim path across the sands to Holy Island, Northumbria.

I cry out in delight and start describing this luminous beauty into my microphone — we have been tasked with finding hope and wonder in the depths of the darkest year, and in this wild and sacred place, in a mingling of moonlight, land and sea, here they are.

BBC Radio 3’s Sound Walks are now a Christmas tradition. While engineer Andy Fell records the soundscape, I report the sights, smells and stories we encounter, performing a kind of live travel writing, my other job.

It has taken me around the world, but I have never been on stranger quests than these, first to Lindisfarne, then to The Wash on the coast of Lincolnshire, seeking light and magic.

‘Walk into two sunrises and bring back light — lift our spirits for Christmas!’ was the brief from Radio 3.

Via deserted roads, locked-down towns and empty hotels we journeyed, anxious about what we would find.

People have come to Holy Island for centuries, seeking comfort, enlightenment, hope or healing. What if this dawn reveals nothing but freezing grey rain?

But when Andy starts recording, and we step off the causeway into a shifting world of tides and shorebirds, my worries turn to thrill.

The outline of Holy Island lies low against the sea. As we cross the strakes, the tidal flats which separate Lindisfarne from the mainland, we are sploshing in the footsteps of centuries.

This is a mythical landscape. From one of the hillsides behind us, in AD 651, a young man minding sheep saw lights descend and then rise into the sky.

Believing he had glimpsed a spirit ascending into heaven, Cuthbert, later Saint Cuthbert, decided to devote his life to faith. The lights he had seen coincided with the death of Aidan of Lindisfarne, who founded the monastery, bringing Christianity to Northumbria.

The spirits of hunter-gatherers, fishermen, traders, travellers, monks, pilgrims and the visitors of our time are all with us, it feels, as we leave the certainty of the land.

You feel jumpy. Signs warn of quick sands and fast tides. You feel vividly alive as the whistles of curlew, a large wading bird, ring out, answering the gusts of wind on the water. You feel comforted by the line of stakes marking Saint Cuthbert’s way, the crossing path over the sands.

Most of all you feel uplifted and fortunate to be able to breathe the air and walk between sea and sky. No wonder the cult of Cuthbert spread across continents and centuries, when merely being here is a blessing.

So many people came to see him on Lindisfarne that he moved to a hermit’s cell on the island of Inner Farne. Cuthbert’s hardiness took him into the remotest villages, where his humility, his willingness to listen and his healing and counselling made him famous.

Whether or not you have religious faith, it is impossible not to be delighted by one account of Cuthbert related by the Venerable Bede, the Benedictine monk who lived in the 8th century. 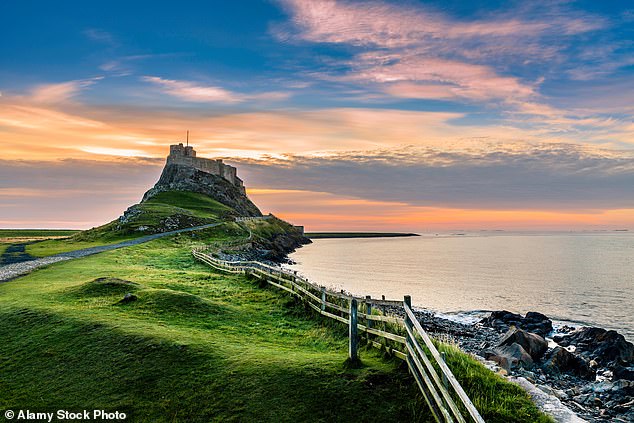 Dramatically perched on a rocky crag and accessible via a three-mile causeway at low tide, Lindisfarne castle was originally a Tudor fort

Cuthbert spent a night standing in the sea, praying. At dawn, Bede writes: ‘He came out of the water, and, falling on his knees, began to pray again. Whilst he was doing this, two otters came up from the sea, and, lying down before him on the sand, breathed upon his feet, and wiped them with their hair after which, having received his blessing, they returned to their native element.’

That native element has a wild beauty now. Land and sea resolve in separate shapes, but underfoot they are entangled. Wind blows racing patterns of silver snakes across the water. A cloud shifts, revealing that huge moon reflecting in the riddles and creeks. While the North can surely be dark and cold in winter, this coast is also a home of light.

John Walker of Stockton-on-Tees invented the friction match in 1827. In Newcastle in the 1860s Joseph Swan invented an early electric light bulb.

Countless millions of tons of coal mined in Northumbria lit and powered industry and empire. And most humbly, here, around AD 710, work began on the Lindisfarne Gospels, a miraculous illuminated manuscript and the oldest translation of the gospels in English, which threw another kind of light across the land.

The main creator is believed to be Eadfrith, a monk, later bishop, who also invented a lead pencil and a light box.

Telling these stories to the microphone, we arrived at the island and walked across Lindisfarne. A Viking raid in AD 793 failed to destroy the legacy of the Golden Age of Northumbria. When the world reopens, you will find the Lindisfarne Gospels in the British Library, and Saint Cuthbert in Durham cathedral, his tomb still drawing pilgrims.

Our last view from Lindisfarne took in the Longstone Lighthouse, the home of Grace Darling, braver than any Viking, who rowed an open boat through a storm to rescue survivors of a shipwreck in 1838.

Her heroism inspired her era. How many of us are like lighthouse keepers now, I thought, confined and hoping the storm will subside?

And still we rise, to do what we must and what we can to help, to work, to get through.

Back on the mainland we head south to record the second Sound Walk in the mysterious landscape of The Wash, between Lincolnshire and Norfolk.

While Holy Island’s treasury of stories are concentrated in a bay, The Wash is a wide water-world of histories laid out across hundreds of square miles under the eastern sky.

Again we set out in darkness, our target Gibraltar Point, which pushes into the North Sea above the mouth of The Wash.

The Wash, from Old English wase, meaning mud, slime or ooze, combines the estuaries of the rivers Witham, Welland, Nene and Great Ouse in a reedy immensity of channels, creeks and mudflats.

A home and migration point for millions of birds, it was once a busy seaway. When wool was the wealth of the nation, three million fleeces a year were shipped out of Boston.

Along the coast, King’s Lynn was one of the most important ports in England during the 14th century. Both towns retain some sea trade, though both now stand back from the water. The coast writhes as if alive hereabouts. Drainage and reclamation date back to the Romans, while floods and sea-level rise are constant threats.

I have longed to see this place since I was a child and obsessed by the writing of ‘BB’, Denys Watkins-Pitchford, whose children’s book, Manka, The Sky Gypsy, tells of a Wash wildfowler hunting an albino pink-footed goose. And suddenly there they are. ‘Heaven’s hounds,’ BB called them, ragged lines of pink-footed geese in skeins gabbling as they fly over, heading out to the sandbanks. Their calls seem to summon the dawn.

Now we are walking through different twilights — moon shadows fade with the stars as the coming day and the departing night briefly share the sky. We crest a rise of sand dunes, the sea lying in a lacquer of blues below us.

Wind turbines in mist are giants with lights wrapped around their ankles. Now the air begins to strobe slowly with the sunrise, the light changing every second.

A dark bank of stratus cloud separates the horizon from an azure band higher up. Distant fleets of altostratus cloud turn rose, then crimson, then gold, as if all the heavens are decked in Christmas lights.

This symphony of colours is answered in sound from the marshes. Gossiping shelduck, whistles of wigeon, redshanks piping and the cries of oystercatchers and knot blend and rise together.

Andy’s microphones gather their calls as I give descriptions of what we can see and a sense of how it feels to be here.

I think of the sailors, the wildfowlers, the farmers, the sea-dike builders, the walkers and lookouts, the Romans and Anglo-Saxons, seasonal workers, the people of the Fens, and our listeners everywhere, locked down.

The sight of a new day gives the same gift to us all. As gentle as this sky and as shifting as this shore, like so much of our culture, it came in across this sea. In Saxon and Old English it was hopa. These days we call it hope.