The late snow show: Family skiing in April? It’s a doddle at this super-high resort

By Felix Milns For The Daily Mail

We’re on top of the world!’ exclaimed Maisie, our nine-year-old, as we stood above a sea of clouds, hiding a necklace of serrated peaks.

Despite being mid-April, the snow underfoot was as crisp as you’d find during February half-term.

That’s the joy of a late-season family ski trip to Les Deux Alpes.

Topping out at 3,600 metres, Les Deux Alpes, pictured, is the highest resort in France

Topping out at 3,600 metres, it’s not only the highest resort in France, but also much more budget-friendly than many others, with a six-day pass costing £40 less than in the Three Valleys. Multiply that by four and it’s a significant saving.

Our base was the Village Club du Soleil, a not-for-profit organisation which provides no-frills, all-inclusive packages for families.

Virtually unknown in the UK, they are now the market leaders in France, with 10,000 beds in 18 destinations.

Les Deux Alpes is a new resort for them, having taken over an old Club Med hotel.

While the building feels tired after many years of hard service, it offers superb value for money, with a focus on good food. Every night has a different theme, ranging from tagines to moules frites.

We only saw a handful of English families, so it’s perfect for those who like to escape their fellow countrymen on holiday.

Our children, Maisie and Imogen, loved having crepes and doing cartwheels on the dancefloor with their new French and Belgian friends. 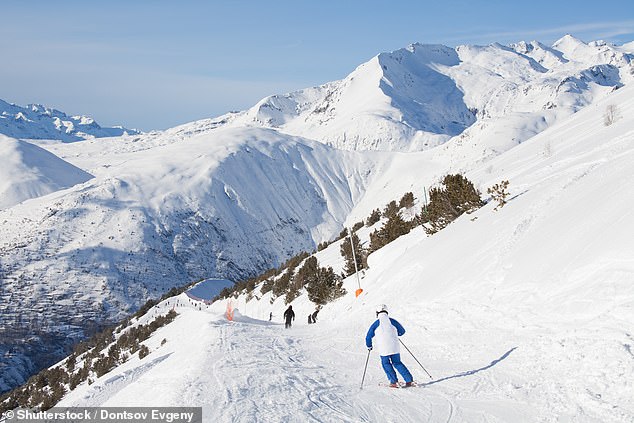 In mid-April, the snow underfoot in Les Deux Alpes is as crisp as you’d find during February half-term

The Ecole du Ski Francais runs a free shuttle service from the hotel for lessons with English-speaking instructors.

The children had a whale of a time with their instructors, particularly when they had to weave, Anthony Joshua style, through a set of swinging punchbags.

British skiers are not used to coming back to the hotel for lunch, but the food was so good we found ourselves returning most days, kicking off our ski boots for an hour and tucking into rotisserie chicken, or a barbecue on the terrace.

It was quick and easy to get back up the mountain — about 100 metres to the nearest lift — so you can return to being above the clouds in no time.