EXPRESS INFORMER > Travel > The joys of a SWITZERLAND beach break: Finding sands to rival the French Riviera on Lake Geneva

Contrary to popular belief, Switzerland is not all mountains, chocolate and cheese. No, this landlocked country is also the perfect destination for a beach holiday. Switzerland might not possess a coastline, but it is home to the largest Alpine lake in Europe.

Lake Geneva (Lac Leman in French) is the crescent-shaped lake that Switzerland shares with France. Forty-five miles long and a little over eight miles at its widest, its waters are so impossibly blue that you’d be forgiven for thinking you had landed in Greece if it weren’t for the snow-dusted Alps in the distance.

At the lake’s southern tip is Geneva and the starting point for a driving route that hugs the northern shoreline through the Canton of Vaud region until it reaches the French border some 70 miles later.

Switzerland might not possess a coastline, but it is home to the largest Alpine lake in Europe. Pictured is the beach and popular swimming pool at Bellerive-Plage in Lausanne 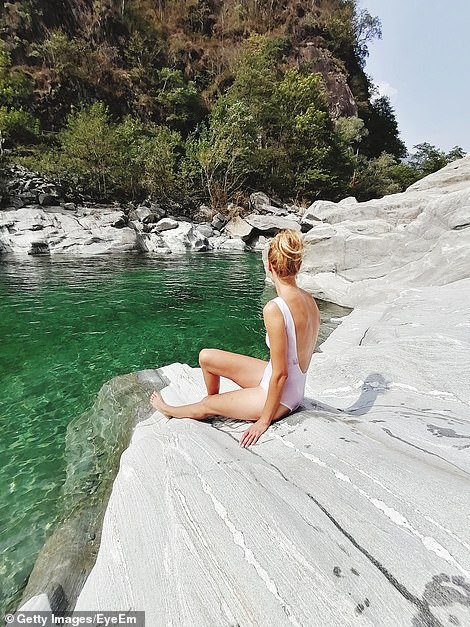 Hot rocks: Sunbathers can sit back and simply enjoy the sight of the calm, crystal-clear water

Dotted along this road are more than 100 picture-perfect beaches. Some boast long sweeps of fine sand, others are pocket-sized pebbly bays.

A handful overlook medieval castles and ancient vineyards. Some beaches are so hidden away that even the locals have a hard time finding them. By contrast, beaches along the Swiss Riviera, so called for its waterfront vistas and easy-going lake lifestyle, see a steady stream of sunseekers during the summer months. So, grab your bathers and get ready to join them.

Just 30 minutes from Geneva is the charming town of Nyon that stands surrounded by ancient vineyards at the foot of the Jura Mountains. It’s known for its Roman columns, castle and enchanting lakefront. Visit on the last Sunday of the month and you’ll catch the famous Puces de Nyon, a large and lively flea market. Want to stay overnight? Look no further than the Hostellerie du 16eme Siecle (16eme.com), where staff will treat you like long-lost friends. Doubles cost from £156.50 per night.

Le Plage Communale des Trois-Jetees (Three Jettys Public Beach) is the town’s main spot for a swim, and is well-established with a manicured lawn and a restaurant with tables under sea-green awnings.

Those in the know, however, head for Promenthoux Beach. This magical beach, just two miles out of town, is tucked away within a residential neighbourhood. A long stretch of grass gives way to steps leading into the clear lake waters. In the distance stands Chateau de Nyon. A launch and mechanical lift are positioned to one side of the lake, offering swimmers with mobility needs access to the water.

At Le Petit Bouchon, the open-air restaurant, fresh shrimp sizzle on the grill and the bar does a roaring trade in afternoon cocktails.

It’s 26 miles to Lausanne from Nyon, but don’t rush the journey. Along the way you’ll come across the medieval village of Saint-Prex, home to arguably the most idyllic beach in the region.

The eponymous beach is little more than a sliver of well-worn pebbles sandwiched between a tall hedge and the sun-dappled lake, yet it could not be more beautiful. Visit on a balmy summer’s evening and you’ll spot sun-crinkled locals enjoying a dip followed by a glass of chilled white wine.

Closer to Lausanne is Beach Preverenges, a welcoming stretch of fine sand flanked by tall cypress trees. The shallow, calm waters make it popular with families.

During the summer months, the water temperatures hover around 20C (68F), but they can get up to 24C (75F). The hilly city of Lausanne rises 500 yards from the lake shores, rewarding visitors with spectacular views of Lake Geneva from every angle. The town is home to the International Olympic Committee headquarters and the truly excellent Olympic Museum. 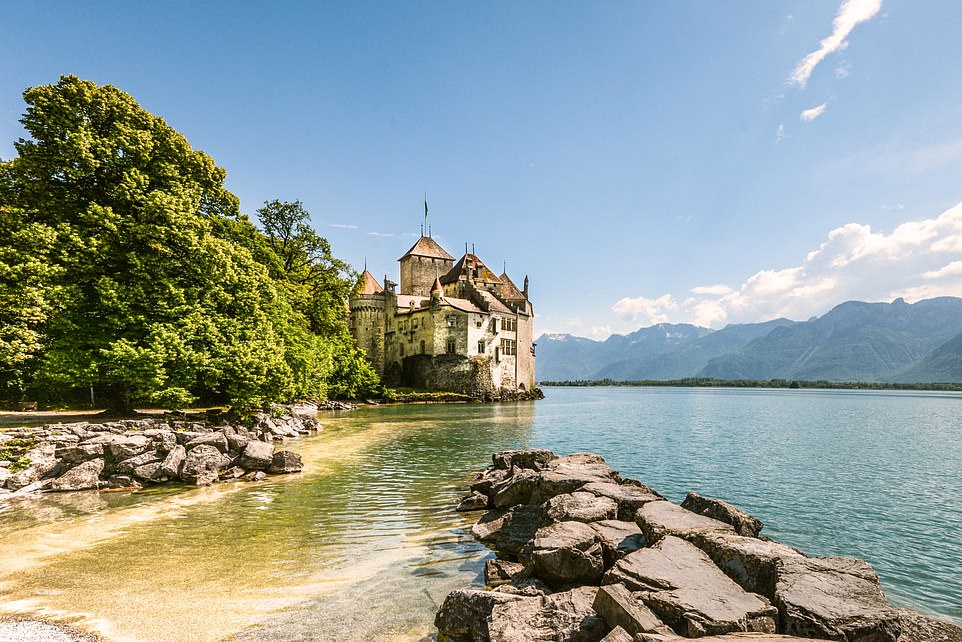 Island idyll: Chillon Beach is a perfectly formed cove where you can swim with views of a 12th Century castle and the Dents du Midi mountains (pictured)

If you want to live large – you’re on holiday, after all – then the elegant five-star Beau-Rivage Palace (brp.ch) stands on the waterfront. Doubles cost from £519 per night.

A new swimming platform has been erected at nearby Ouchy Beach, allowing easy access to the lake. The popular swimming pool at Bellerive-Plage is a short walk away. This complex boasts three enormous pools, four diving boards, a host of sports courts and direct access to the lake. For a room with a view and a more friendly price tag, try the Hotel de la Paix (hoteldelapaix.net) close to the old town. Doubles from £169 per night.

The stretch of shore from Lausanne to Montreux is likened by locals to the French Riviera. It’s also where some of Switzerland’s best wine is produced, grown along steep, terraced vineyards overlooking the lake.

The near-perfect Plage de Lutry sits between Lausanne and Montreux-Vevey. This is a beach that on a summer’s day will have you researching house prices in the area. Join the locals jumping off the diving board anchored offshore or hire a stand-up paddle-board and propel yourself along the serene waters with views of vineyards to one side and the Alps on the other. 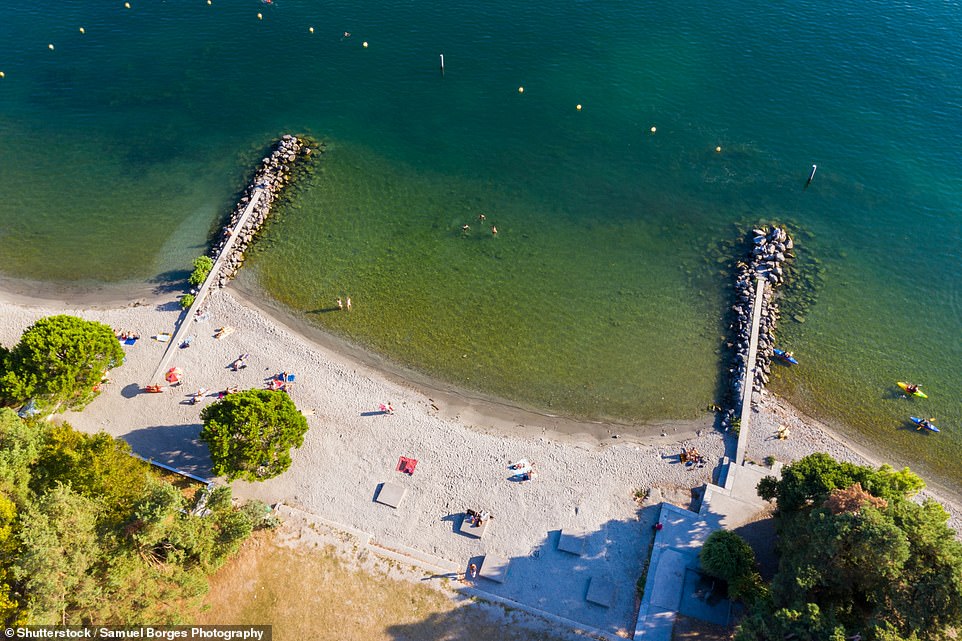 Make a splash: A new swimming platform has been erected at Ouchy Beach, above, allowing easy access to the lake

Afterwards, grab a table at the easygoing cafe and watch for the occasional Belle Epoque paddle steamer to sweep past.

The town of Montreux is famous for its annual jazz festival in July, its Mediterranean microclimate and its Belle Epoque buildings. Freddie Mercury lived here for a time, recording six albums with Queen. A statue of the theatrical frontman stands on the lakeside promenade among hanging baskets filled with technicolour flowers.

Positioned just offshore is a medieval island castle, Chateau de Chillon. Tucked below is Chillon Beach, a perfectly formed cove where you can swim with views of the 12th Century castle and the Dents du Midi mountains.

Closer to the neighbouring town of Vevey is Bain de Dames, a local favourite. Arrive early and spot the swimmers out with their fluorescent-coloured safety floats. Turn up in the afternoon and local families will have gathered on the grassy lawn for a barbecue. For a bird’s-eye view of it all, check in to the convivial Bon Rivage (bon-rivage.ch) which sits directly above the beach. Doubles from £132 per night.