The winners of the 2022 Drone Photo Awards are in, and they’re likely to leave you thunderstruck – especially the two that show dramatic storm clouds brewing.

This year, thousands of aerial images were submitted to the contest by over 2,600 photographers from 116 countries worldwide.

As well as documenting spectacular storms, scenes captured by the winning entries include a crocodile feasting on a dead hippopotamus in Zambia, a pair of polar bears playing together in the Arctic, and a huge iron ore train weaving through the Sahara Desert.

Topping the podium, however, is an extraordinary image of a volcanic eruption in Iceland, captured by French photographer Armand Sarlangue.

The award-winning and commended images will be showcased at the ‘Above Us Only Sky’ exhibition at the Museum of Natural History in Siena, Italy, from October 1 until November 20, as part of the Siena Awards festival dedicated to the visual arts.

The coastal town of The Entrance in New South Wales, Australia, was the setting for this truly spectacular storm picture, captured by Jim Picot, who lives nearby. Picot says that the ‘diabolical storm cell formed so quickly’ that he had to act fast to successfully capture the ‘monster’ with his drone. The image is commended in the Urban category 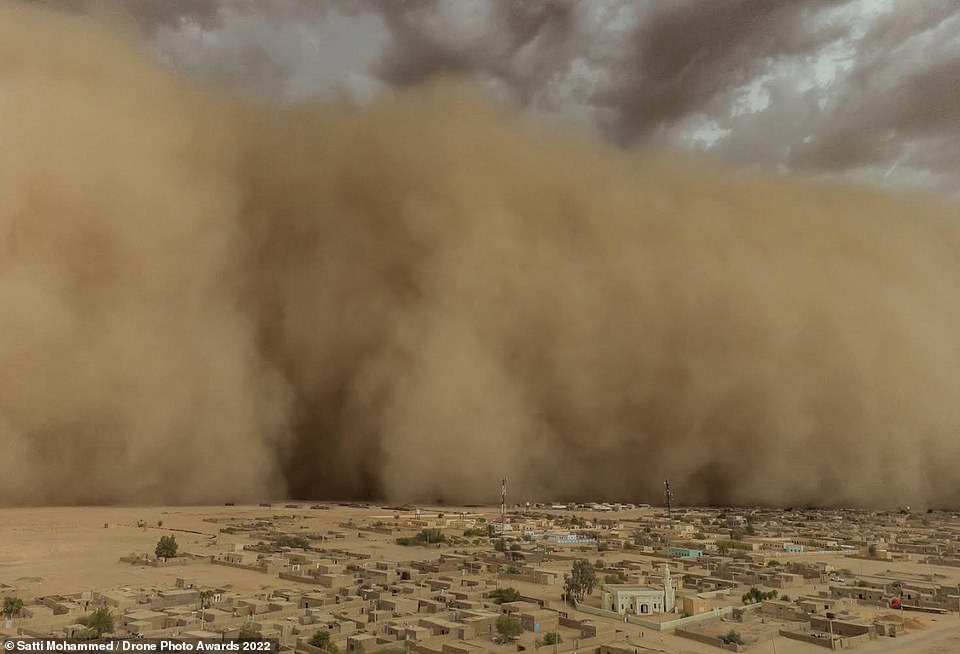 This astonishing picture shows a sandstorm thundering over Kabushiya, a town by the River Nile in Sudan. Captured by Satti Mohammed, it’s highly commended in the Urban category 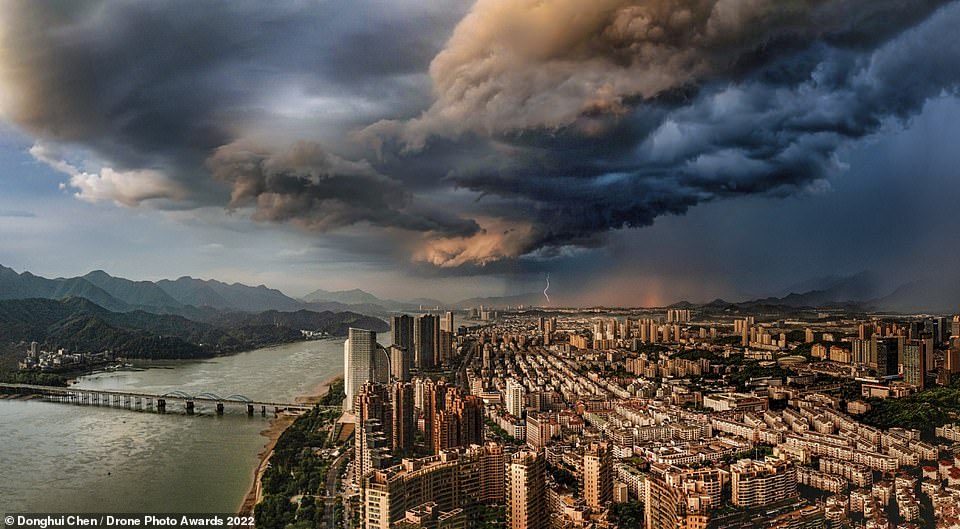 This awe-inspiring image – highly commended in the Urban category – of clouds swirling over the Chinese city of Hangzhou is the work of photographer Donghui Chen. ‘Dark clouds from the southeast and the sunset light in the northwest create a great contrast,’ the photographer says of this ‘very intense’ scene. Chen adds that ‘it started pouring rain’ just after the drone landed on the ground 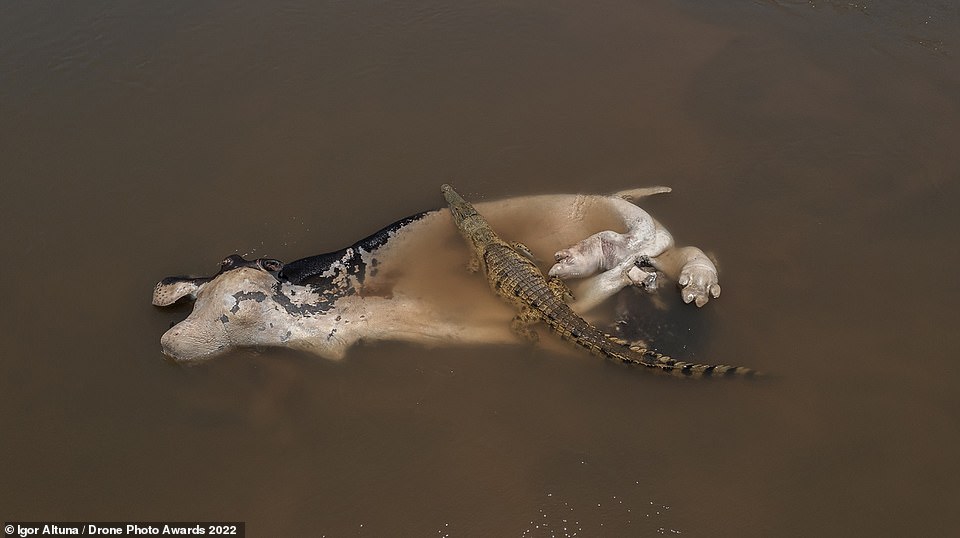 This jarring image by Igor Altuna shows a dead hippopotamus being eaten by a crocodile in the Luangwa River in Zambia’s South Luangwa National Park. It’s commended in the Wildlife category 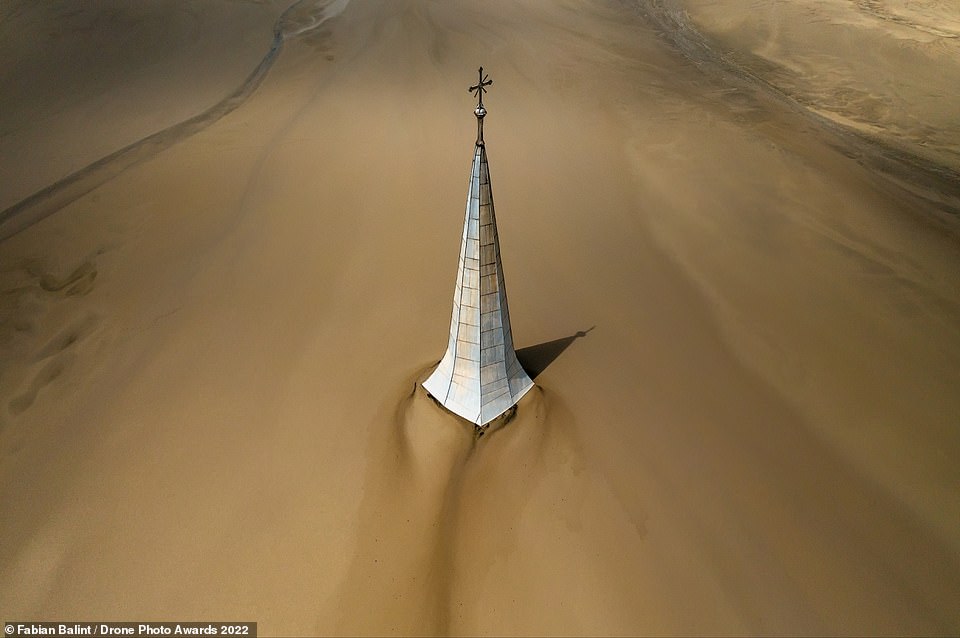 The abandoned Romanian village of Geamana is the setting for this fascinating picture, snared by Fabian Balint. In 1978, the waste products from a nearby copper mine were deliberately washed into valley that held the village, meaning the houses and buildings became submerged by a toxic lake. This picture – commended in the Urban category – shows the village’s old church tower poking out of the lake’s watery mud 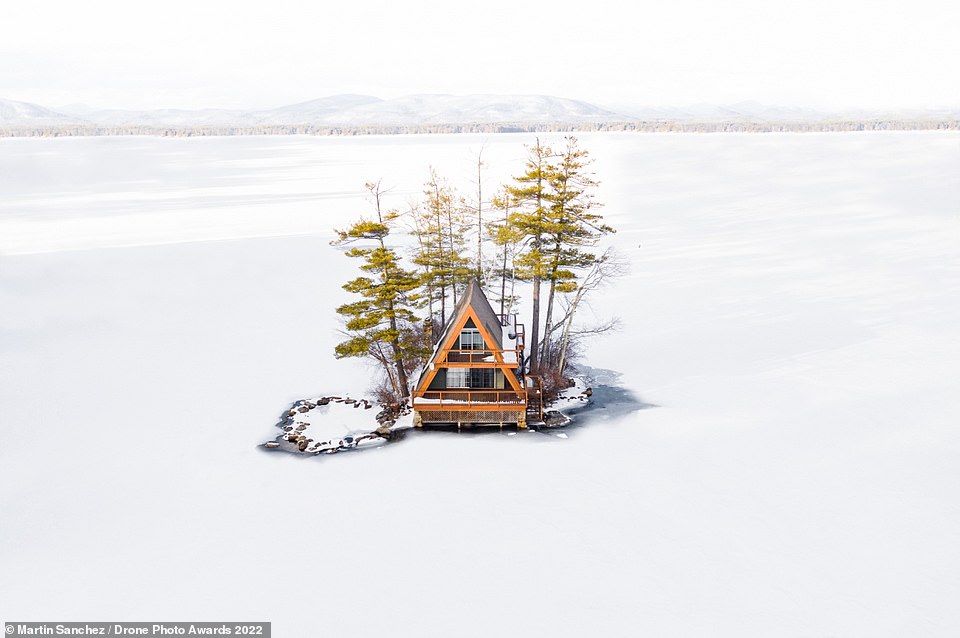 Describing this picture, which is commended in the Urban category, photographer Martin Sanchez says: ‘During one of the coldest winters in the United States, a small cabin survives in the middle of a frozen lake in New Hampshire. It is completely isolated from everything in a peaceful setting with nature’ 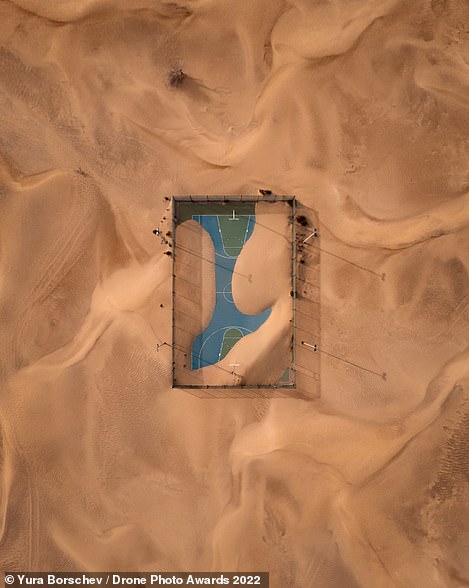 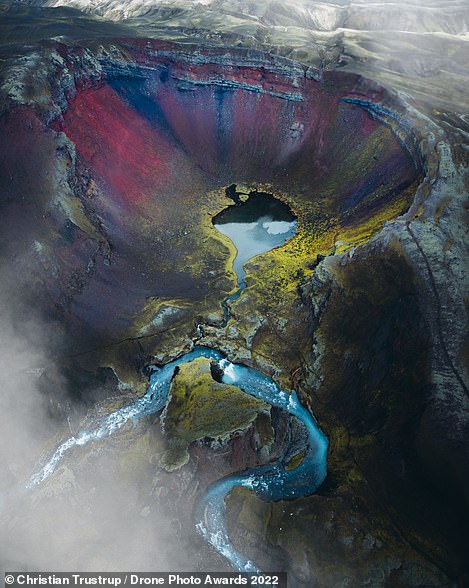 LEFT: This striking picture, a runner-up in the Urban category, shows a basketball court after a sand storm in the UAE. It’s the work of photographer Yura Borschev. RIGHT: This beautiful picture of Iceland’s Raudibotn crater, which lies in the Fjalllabak region, is the work of photographer Christian Trustrup, who describes the scene as a ‘hidden gem’. The image is commended in the Nature category 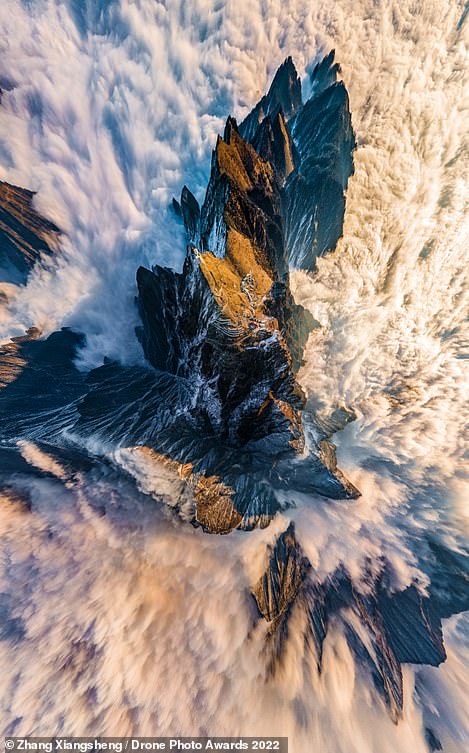 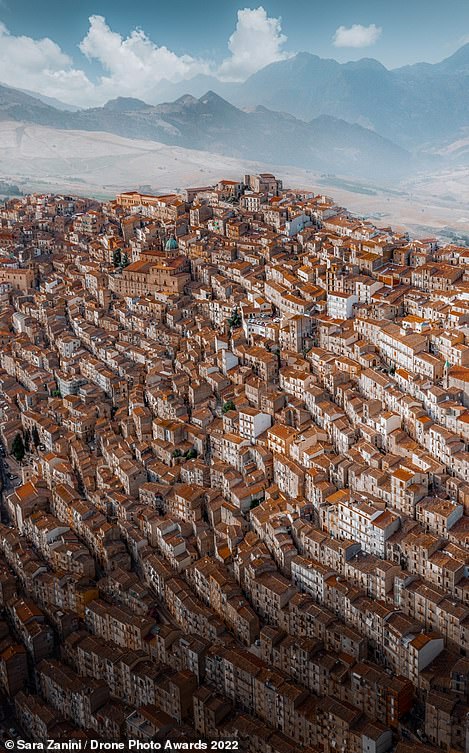 LEFT: This powerful picture – commended in the Nature category – shows Niubei mountain, an 11,811ft- (3,600m) high peak in southwest China’s Sichuan Province. ‘The ridge of the whole mountain is above the sea of clouds,’ says the photographer, adding that the mountain ‘soars like an eagle’ through the blanket of white. RIGHT: This breathtaking bird’s eye view of Gangi, a village ‘immersed in the Sicilian countryside’ in the province of Palermo, is the work of Sara Zanini, who captured the image early one summer morning. It’s commended in the Urban category 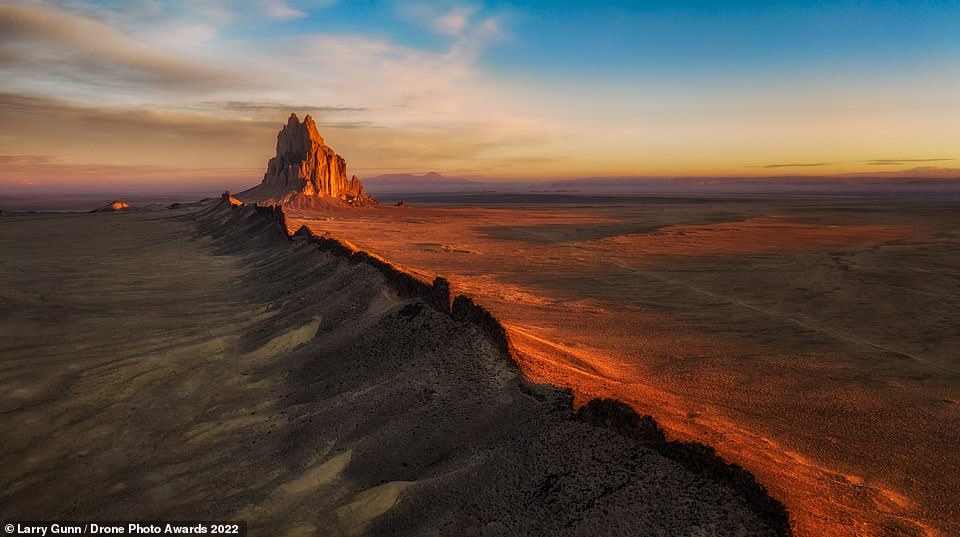 Highly commended in the Nature category, the background of this mesmerising image shows Shiprock, a 1,583ft- (482m) high volcanic plug that rises out of the desert on Native American Navajo lands in New Mexico. In the centre, a rock dike can be seen leading up to Shiprock. Photographer Larry Gunn notes: ‘The early morning light illuminates the formation in the cold morning, producing an interesting shadow’ 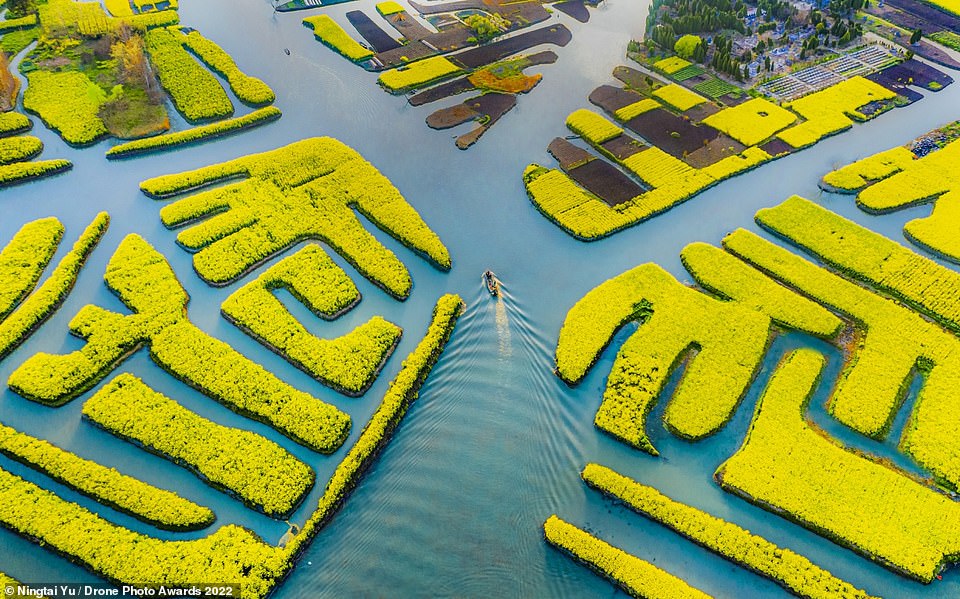 Photographer Ningtai Yu snared this stunning picture – commended in the Urban category – of the Qianduo Scenic Area, known as a ‘rural tourism spot’, in the Chinese city of Xinghua. ‘The scenic spot is famous for its characteristic landscape,’ the photographer says, explaining that every year during the Qingming festival – a traditional Chinese holiday in the springtime – the raised wetland fields in the scenic area are covered with golden rapeseed flowers. ‘This magnificent view attracts many tourists,’ Yu adds 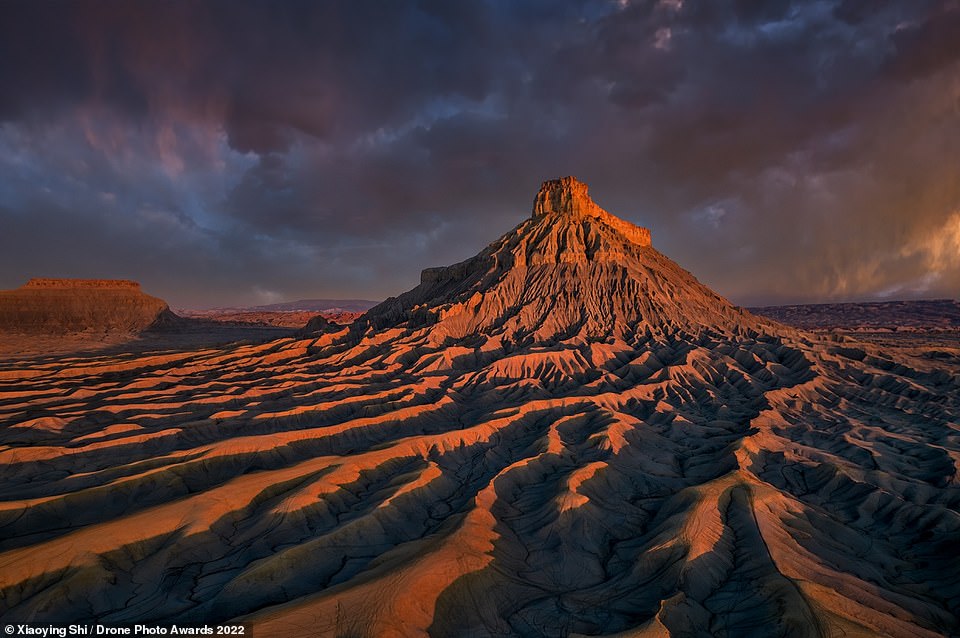 This beautiful picture of Factory Butte, a 6,302ft (1,920m) peak in Utah’s Capitol Reef National Park, is commended in the Nature category. ‘The earth, looking like roots, guides the viewer’s gaze towards the rocky peak,’ notes photographer Xiaoying Shi, who adds that the park’s ‘colourful geological formations’ are ‘amazing’ 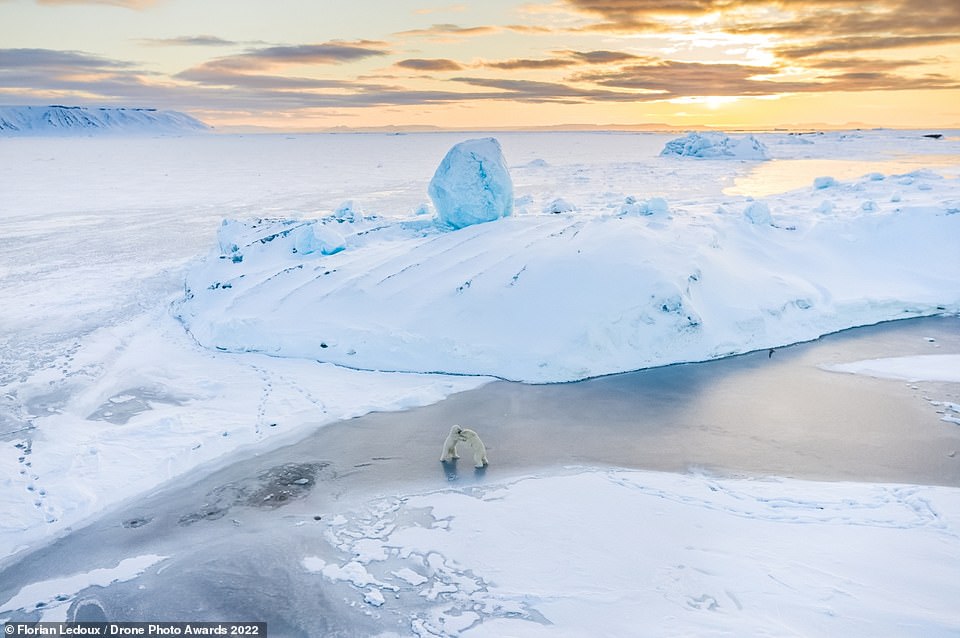 This heartwarming picture, captured in the Arctic, shows two young adult polar bears playing together. Florian Ledoux, who captured the image, says that the pair played on the ‘very fresh’ and slippery ice ‘all night long’, making holes, diving, and ice-skating. ‘This unique experience was the result of five months on the field, living with and near the bears,’ he adds. Impressing the judges, the image is highly commended in the Wildlife category 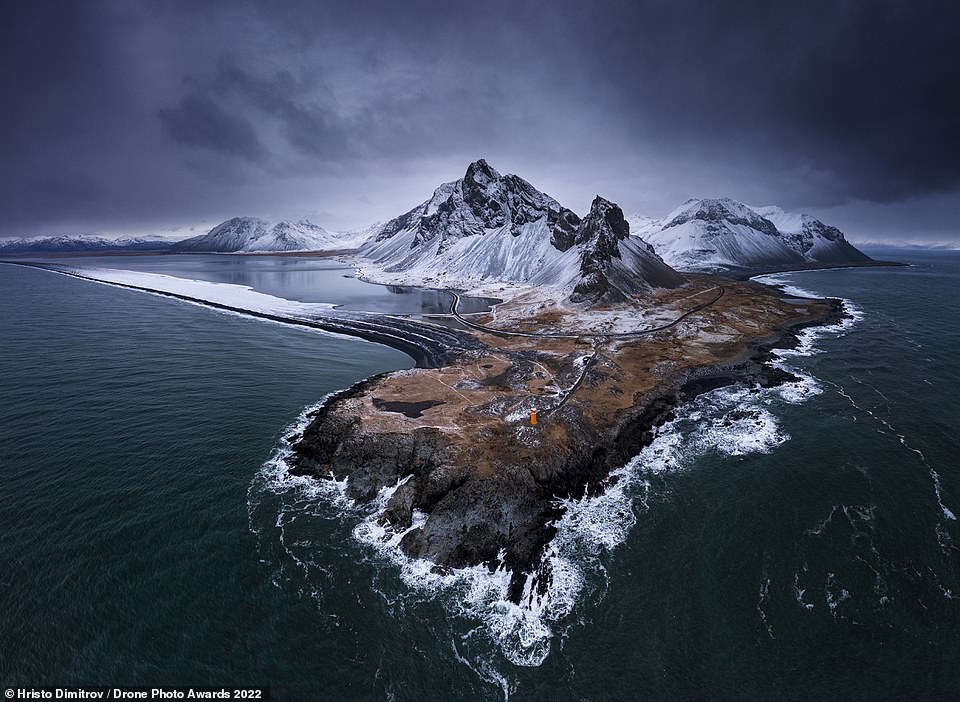 This dramatic picture of Iceland’s Krossanesfjall mountain range, with Hvalnes Lighthouse in the foreground, was captured by Hristo Dimitrov. The photographer, who visited the site in April, notes that the weather was ‘unpredictable’ during his visit with ‘a lot of wind’ and a snow storm, meaning he had just ‘one moment to take off with his drone and to try to take some pictures’ of this ‘incredible’ place. His shot is commended in the Nature category 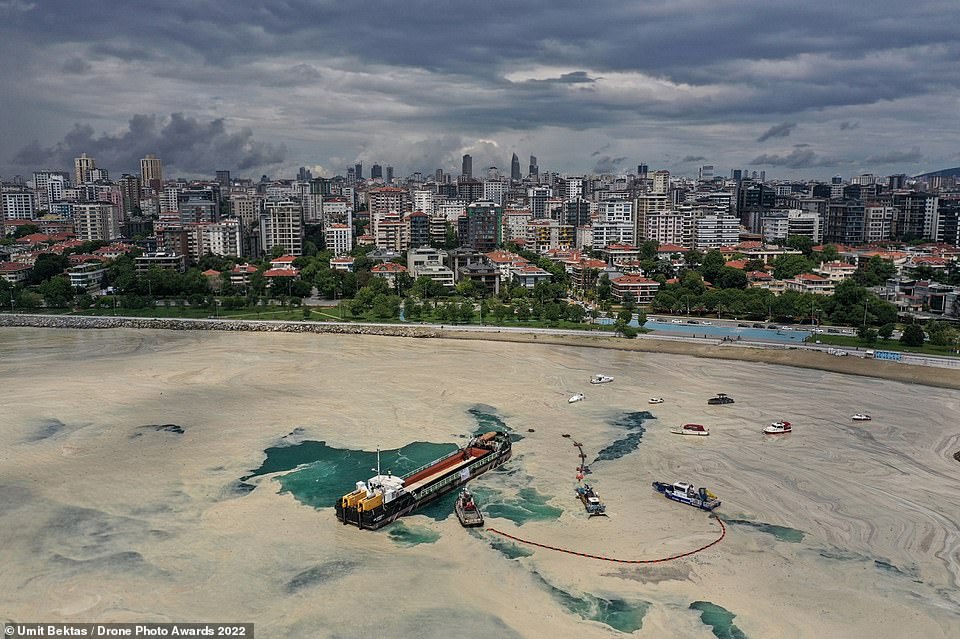 Photographer Umit Bektas explains that in this eye-opening picture, sea-surface-cleaning vessels and barrier-laying boats clean up ‘sea snot’ – the ‘thick slimy layer’ of organic matter that ‘poses a threat to marine life and the fishing industry’ – in Istanbul, Turkey. It can suck the oxygen out of the water and spread viruses, among other concerns. Bektas notes that the sea snot, also known as marine mucilage, is affecting species in the Sea of Marmara, an inland sea within Turkey’s borders. This picture has been commended by the judges in the Urban category

This enchanting picture of the iconic Taj Mahal in Agra, India, shows the mausoleum from beyond ‘an incredible sea of cloud formations on river Yamuna’, which runs alongside the building. Photographer Michele Falzone reveals that the ‘eternal monument to love’ was built in 1632 by the Mughal emperor Shah Jahan to pay homage to his late wife Mumtaz Mahal, who died while giving birth to the couple’s 14th child. Falzone’s shot is commended in the Urban category 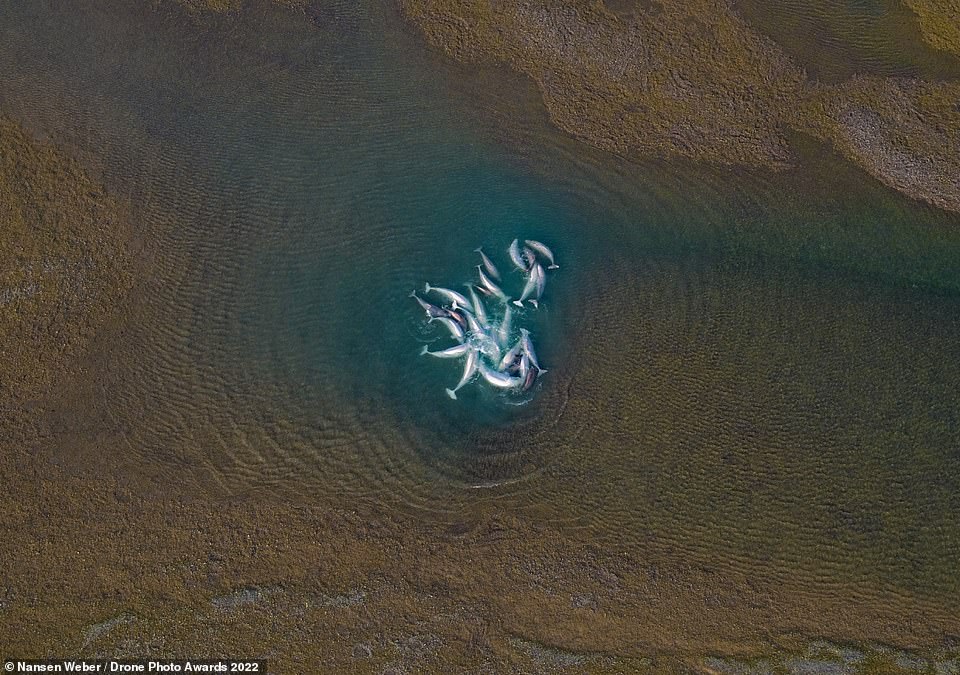 A group of 24 beluga whales are shown stranded in a tidal pool in the Cunningham River in the Canadian territory of Nunavut in this powerful picture, which is commended in the Wildlife category. Nansen Weber, who was behind the lens, says: ‘Anxiously fighting for the deepest water as the tide retreats, the larger whales push the smaller whales to the exterior. The group of whales were stranded for an entire tide and luckily escaped before becoming prey to passing polar bear’ 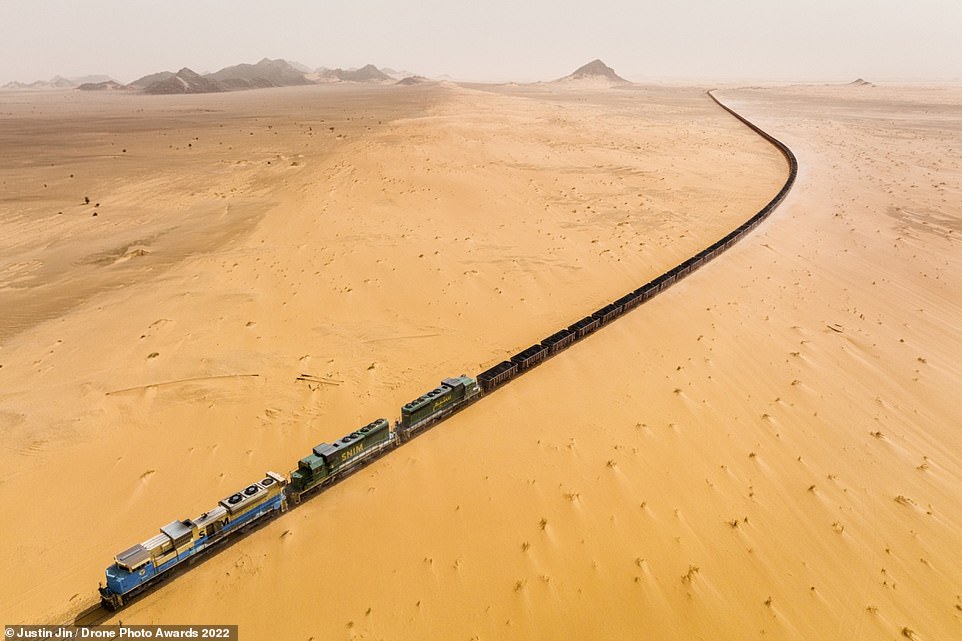 In this captivating picture a train on the Mauritania Railway ‘trundles through’ the Sahara Desert in Mauritania, bringing iron from the country’s iron mining centre in Zouerat to the port in the city of Nouadhibou. The railway, which is 704 kilometres (437 miles) long, is nicknamed ‘The Backbone of the Sahara’, photographer Justin Jin reveals. The shot is highly commended in the Urban category 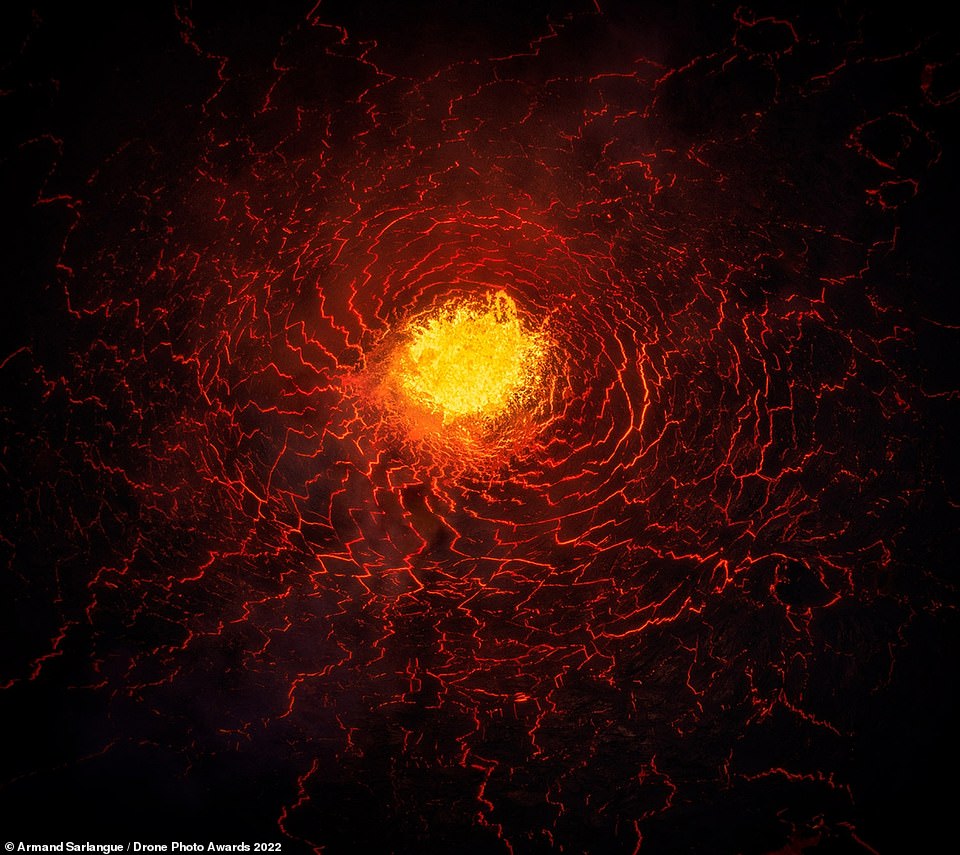 Behold, the mesmerising image that takes the gold medal in the contest, captured by Armand Sarlangue. It shows a secondary fissure erupting ‘a few hundred metres’ from the main crater of southwest Iceland’s Fagradalsfjall volcano, during the eruptive phase in September 2021. ‘It was captured as a storm was hitting west Iceland, with rain and strong winds,’ the photographer notes, adding: ‘Due to the difficult conditions, a drone capture like this is unique’