A heartwarming video shows the moment an eight-year-old boy won his first 800m race after falling over and hurting himself seconds into the race.

Eden Falk, who is deaf, was so excited to be running in the race against his class mates that nothing could stop him from winning – even a severely grazed knee and stomach.

His dad Adrian, 45, can be heard in the background telling spectators his son would just be more determined to win after the spill.

‘I know my son,’ the proud dad told FEMAIL.

Eden Falk, young boy ‘who loves running’ shocked onlookers with his incredible to ability to win a race after falling over metres from the starting line

‘He will be more determined, it is better, go Eden,’ he cheered as his son began overtaking the others on the track.

And the determined youngster didn’t disappoint, by the end of the first lap he was in the top three and by halfway through the second and final lap he had a huge lead.

Eden held up one finger as he cruised past his dad and mum Michelle, 40, as they watched on in pride.

Eden, who was born with major hearing loss, told FEMAIL he is competitive by nature and his hearing impairment just makes him push harder.

‘If you have hearing loss you can do anything still, because nothing is impossible,’ he said. 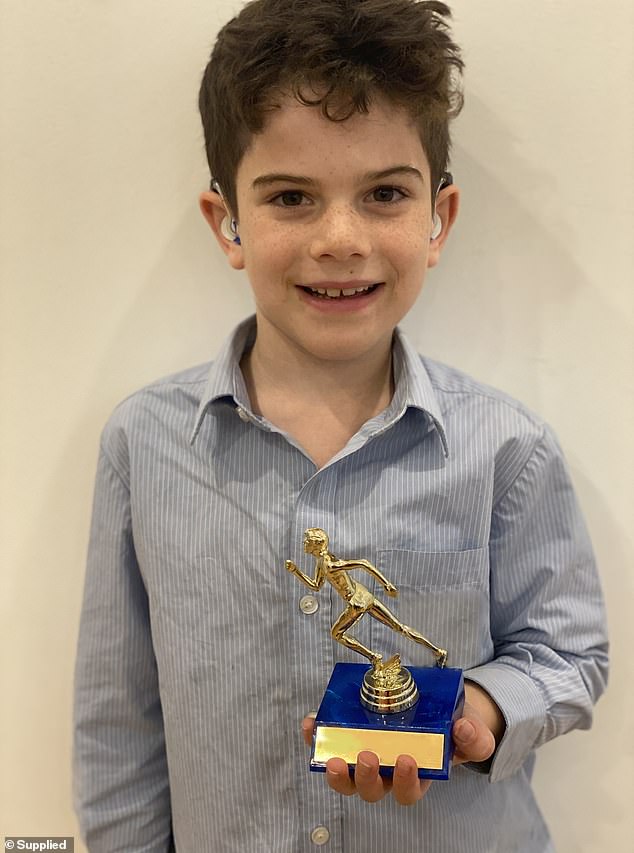 Eden, who was born with 50percent hearing loss in each ear says he loves to run and wants to become an Olympian 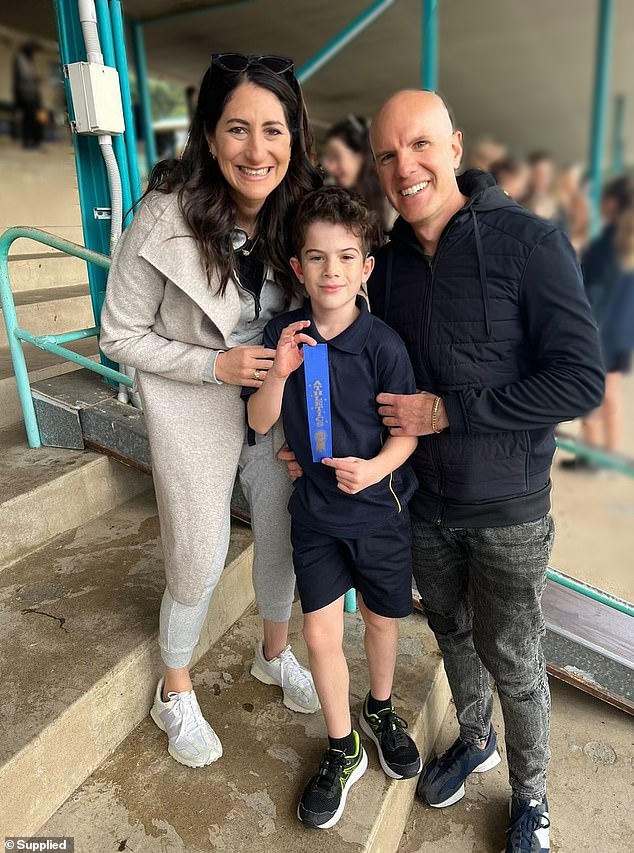 His dad Adrian,  right, can be heard cheering him on in the video and never doubted his son, even after the stack. Eden’s mum Michelle is also pictured

Eden said running makes him feel free, and calm and that he likes that he is ‘good at it’.

He’s  even met Solomon and taken tips on racing like one of the greats.

Adrian says his son’s confidence to the Shepherd Centre, who specialise in helping kids with hearing loss keep up with their peers.

‘The Shepherd Centre has been instrumental to building Eden’s confidence and providing him with an outstanding level of support to enable him to communicate just as well as his peers, who don’t have hearing loss, enabling him to attend a mainstream school and thrive,’ he said.

Eden has hearing loss in both ears, his father explained and can only hear 50 percent of things without his hearing aids. 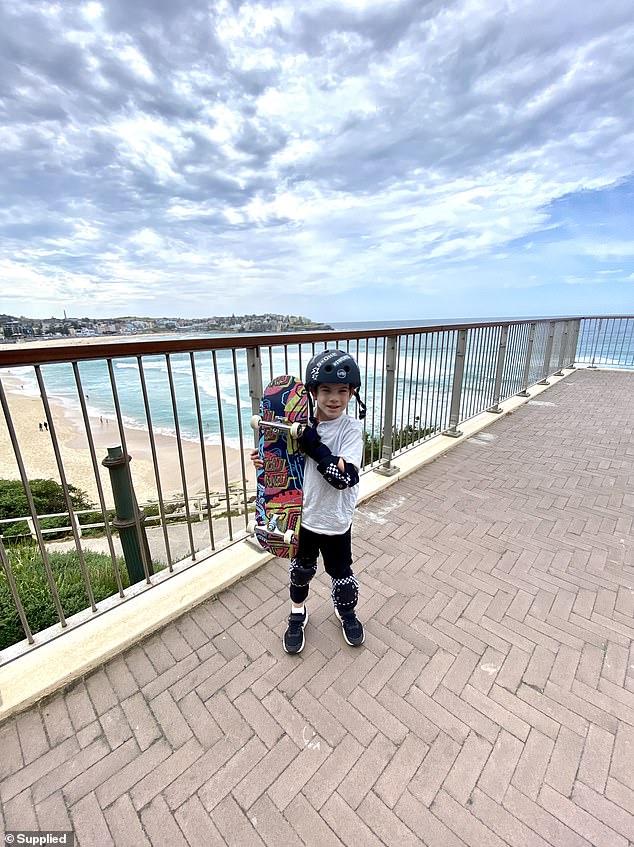 ‘We reached out to The Shepherd Centre who help kids from newborns with their early intervention program where he went for regular therapy sessions for five years,’ the proud dad said.

‘We wanted him to get him school ready and empowered to take on any situation that comes his way.’

And he is definitely ‘ready’ his dad explained, and doesn’t feel the need to change anything about himself.

He even opts for very obvious hearing aids in his favourite team colours instead of having the ‘invisible’ or clear variety.

Adrian says they treat the aids like glasses, and his son is happy to help normalise them.

The father-of-two was still shocked when he saw the extent of his son’s injuries following the race, noting he had large grazes up the front of his body. 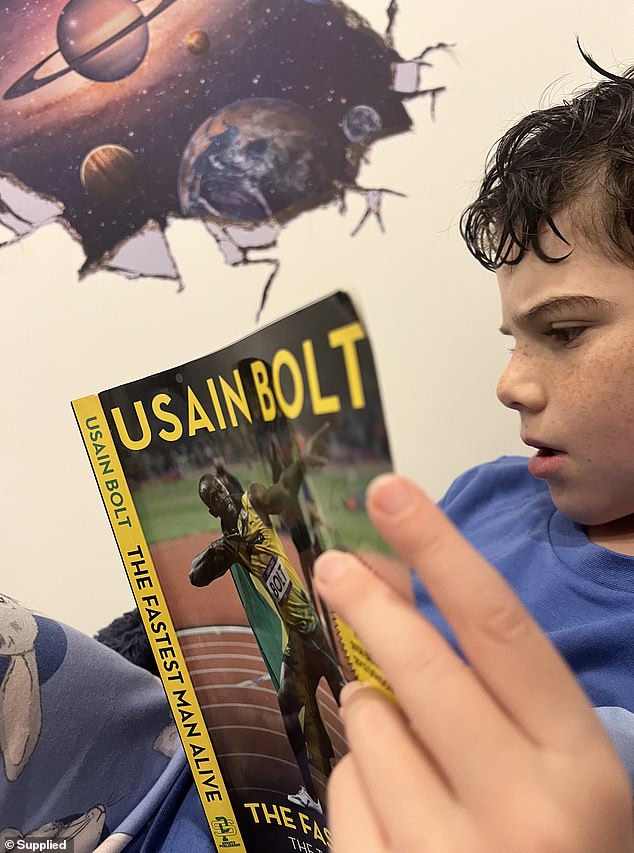 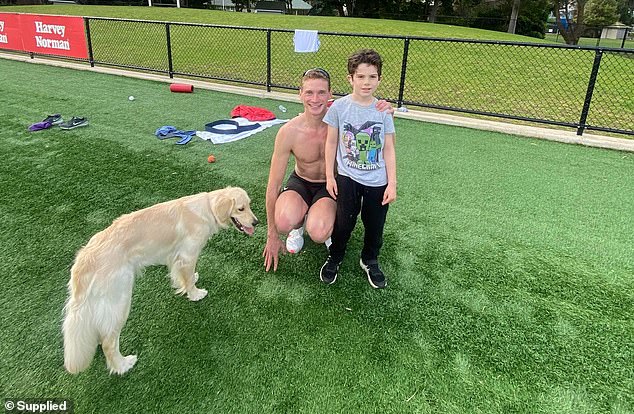 He said it goes to prove how tough and confident his son is.

The family have shared the inspiring video in time for Loud Shirt Day, which is on Friday, and aims to raise awareness for people living with hearing loss.

Adrian said his son’s hearing loss has been a blessing in many ways as it prompted the parents to request doctors to do genetic testing.

At first they were told it wasn’t necessary but they pushed back, and it saved Eden from brain damage.

Doctors found the couple’s second child had a problem with his pituitary gland.

This impacted his thyroid level and if it had gone unnoticed he would have been permanently brain damaged by the time he was nine months old.

Adrian said he and his wife were ‘shocked’ by the initial diagnosis because their daughter had passed the early tests easily.

But they say they couldn’t be more proud of their ‘little legend’ who is not just good at running but excels in at basketball, karate, swimming and skateboarding too.

Loud Shirt Day is the perfect excuse to wear your brightest clothes and get LOUD and PROUD to raise money to help give the gift of sound and speech to deaf children.

Organise an event with work colleagues, school or with friends. Create a theme – wear your best and brightest frock, the most outrageous outfit – and get people to contribute on the day for the honour of participating (and having a really good time).

This year, the official date for Loud Shirt Day is Friday 21st October 2022 – but you can host your event whenever suits you best!