The Covid-19 pandemic has come with more plot twists and sequels than a blockbuster Hollywood franchise. Every expected ending turned out to be nothing of the sort.

So I suppose it should be no surprise that I find myself looking towards next Monday’s so-called ‘Freedom Day’ from Covid restrictions not with relief and enthusiasm, but with a sense of dread.

Right now, even though deaths and hospitalisations remain at very low levels, I am facing the biggest challenges to running my business since the pandemic began.

The looming difficulties could result in disruption even greater than what we faced during the chaotic panic-buying sprees of March 2020 — when shelves were stripped bare and trolleys piled high.

Let me spell out how serious the situation has now become.

Deliveries to our online customers are being affected by the absence of trained pickers, supervisors and van drivers. (Stock image)

Today I am in the unprecedented position of being forced to close our stores because I do not have enough people to staff them.

I am also seeing our supplies disrupted by an acute shortage of HGV drivers. Deliveries to our online customers are being affected by the absence of trained pickers, supervisors and van drivers.

And these are not problems peculiar to my business, Iceland Foods. Every retailer in the country is facing the same issues, as are those in other sectors including food production and hospitality.

On Monday, the bosses of Heathrow Airport apologised for the huge queues passengers had faced over the weekend, acknowledging there was a serious staffing shortage in Terminal 5, with dozens of security officers not turning up to work.

Across the rail network, large numbers of trains were also cancelled due to lack of staff.

And the cause of this rapidly snowballing disruption?

It’s not, thankfully, because workers everywhere are falling ill with Covid.

Instead, they have fallen victim to the so-called ‘pingdemic’: they have received a notification from the NHS Test and Trace app and told that they must self-isolate at home for ten days following a potential contact with someone who has tested positive.

There’s no option to take a test to avoid the isolation, or to appeal.

It was this mounting chaos that prompted me to announce on Twitter last week that Iceland’s Covid-related absences had been growing sharply.

‘Covid rules end 19 July,’ I wrote. ‘Self-isolation rules not eased until 16 August. This will be a s*** show for business.’

And I stand by those words. Right now, overall levels of absence from our stores are just about manageable, because they are localised.

But with the total number of our staff off work increasing by an alarming 50 per cent last week alone — and set to go on rising — we can be sure that the difficulties we are experiencing in some areas will soon spread far more widely.

The long-awaited relaxation of Covid restrictions is very welcome. But it will, inevitably, lead to a sharp and unfortunate rise in cases. 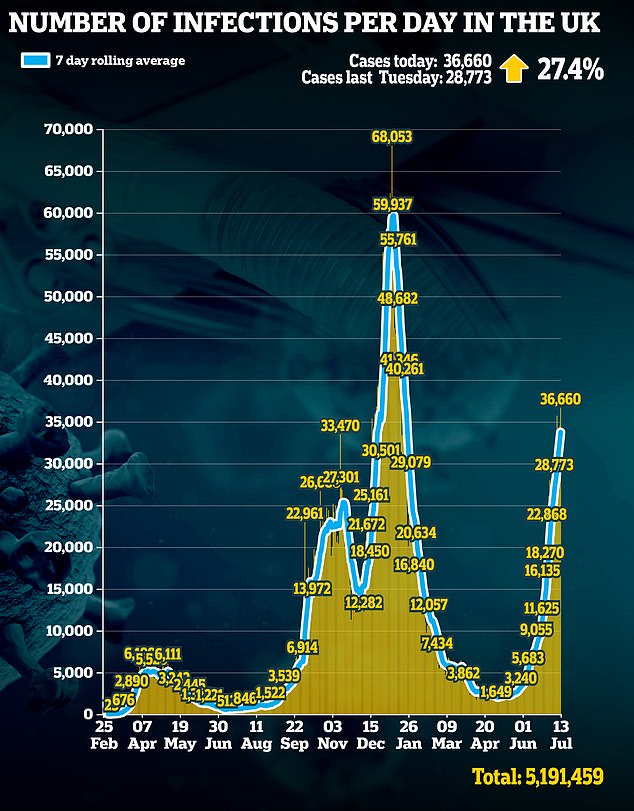 Some 36,660 cases were recorded today — a rise of 27.4 per cent on last Tuesday’s figure and the highest daily total since January 22, at the tail end of the winter peak

These are predicted to climb to 100,000 per day within the next two weeks, higher than we saw before. (The previous peak was some 60,000 new cases per day nationwide.)

But the good news, of course, is that the link between new cases, serious illness, hospitalisations and deaths has been greatly weakened by Britain’s successful vaccine roll-out.

This has worked exactly as planned. So the danger before us is not the collapse of the NHS or an upsurge in fatalities, but a major increase in disruption to commerce and our everyday lives as perfectly healthy and non-infectious people are told that they should stay indoors.

Just as retailers, pubs, restaurants and other businesses are looking forward to welcoming back many more customers, these same businesses face staffing challenges because of the self-isolation rules.

Frankly, the Test and Trace system is a mess. And there are two reasons for this: it is both voluntary and unpoliced.

Those who want to work — or need to due to their financial situation — are tempted to ignore the notifications, particularly if they are symptomless and double vaccinated.

Others — reportedly including some Tory MPs — have deleted the app, either to avoid being ‘pinged’ or after receiving a notification to self-isolate.

I’m sure my own colleagues are playing by the rules, but there is a mass of anecdotal evidence that not everyone is — and who can blame them?

To make matters worse, this is all taking place as millions have booked time off to spend with their families. Countless summer holidays are likely to be ruined by this scheme — which, I remind you, is not due to be repealed until the middle of August.

According to estimates by the Adam Smith Institute, 4.6 million people per week could be forced to self-isolate until the rules are dropped. 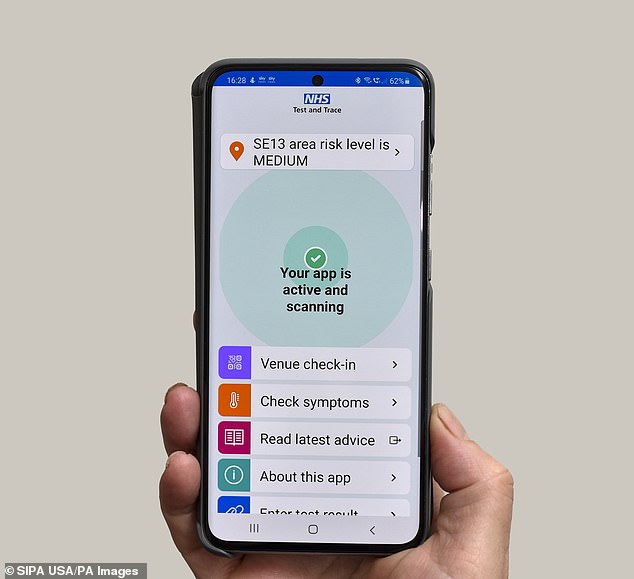 Instead, they have fallen victim to the so-called ‘pingdemic’: they have received a notification from the NHS Test and Trace app and told that they must self-isolate at home for ten days following a potential contact with someone who has tested positive

So what needs to be done?

No one wants to minimise the continuing risk from Covid to the vulnerable, or to see huge numbers of people removing the NHS app from their phones so that they will no longer risk receiving the dreaded notifications.

But, surely, rather than being condemned to ten long days of self-isolation, those informed they have been in contact with a positive case should be offered an immediate test and return to work if negative.

This simple change from Test and Trace to ‘Test to Release’ would turn a ten-day absence into one or two days, and provide huge relief to employers, employees and customers.

At Iceland, we know only six per cent of our colleagues in self-isolation following a ‘ping’ have tested positive. The vast majority of those currently at home could therefore be allowed to return to work without posing any danger to customers or colleagues.

Ministers must urgently change the rules to allow businesses to function, or the next few weeks will see Covid taking the biggest toll yet on our economy — just when we thought the worst was over.

The success of businesses matters to all of us: only the private sector has the capacity to generate the taxes we need to keep funding public services and start paying down the huge deficit that has accumulated during Covid-19.

Like other supermarkets, Iceland has been designated an essential retailer so, luckily for us — and until now, at least — our stores have remained open during the pandemic.

We have increased our online deliveries, which have grown ten-fold within a year.

Four of our store colleagues have been honoured by the Queen for their outstanding work in helping to feed the nation during Covid-19, and they had the chance to meet HRH The Prince of Wales when he visited our head office last week to mark our 50th anniversary.

We are determined to go on feeding the nation for the next 50 years, but we need the Government to be on our side.

The best thing that ministers can do right now is to rethink urgently the working of NHS Test and Trace so that it matches the changed circumstances from next week.

Otherwise, it is no exaggeration to say that ‘Freedom Day’ may prove the harbinger of total chaos.