The Great Dying, Earth’s largest-ever mass extinction, wiped out 90 percent of life on Earth 250 million years ago, but this devastating period was followed by ‘a dramatic rebirth of life’ where animals evolved to be faster and smarter than their dead ancestors, according to a new study.

A team of paleontologists, led by the University of Bristol, found that following the End-Permian Extinction new predators emerged that resulted in prey developing new defenses.

Lizards and birds became faster by developing a posture that was more upright and mammals and avian developed some form of insulation – either hair or feathers.

The Triassic period, from 252–201 million years ago, also saw a massive rise in energy levels of species both on land in and the water.

Professor Michael Benton of the University of Bristol School of Earth Sciences, the lead author of the new study, said in a statement: ‘Everything was speeding up.

‘Today, there is a huge difference between birds and mammals on the one hand, and reptiles on the other.

‘Reptiles are cold-blooded, meaning they do not generate much body heat themselves and, although they can nip about quite quickly, they have no stamina, and they cannot live in the cold.’

Land animals also evolved, such as lizards. The latest Permian reptiles were slow-moving and used a kind of sprawling posture, like modern lizards, where the limbs stuck out at the side – all of which limited their stamina (pictured)

The same happened in the oceans, according to Dr Feixiang Wu of the Institute for Vertebrate Paleontology in Beijing who explained fish, lobsters, gastropods and starfishes evolved to have new hunting styles.

‘They were faster, snappier, and stronger than their ancestors,’ Wu continued.

The fossils used in research were uncovered in China and feature a range of predators that show new hunting styles appeared earlier than first believed.

Wu found modern-style sharks, and the long fish Saurichthys, which was very common worldwide and was an ambush hunter.

This foot-long fish lurked in murky shallow seas and shot forward to snatch all kinds of prey in its toothy jaws. 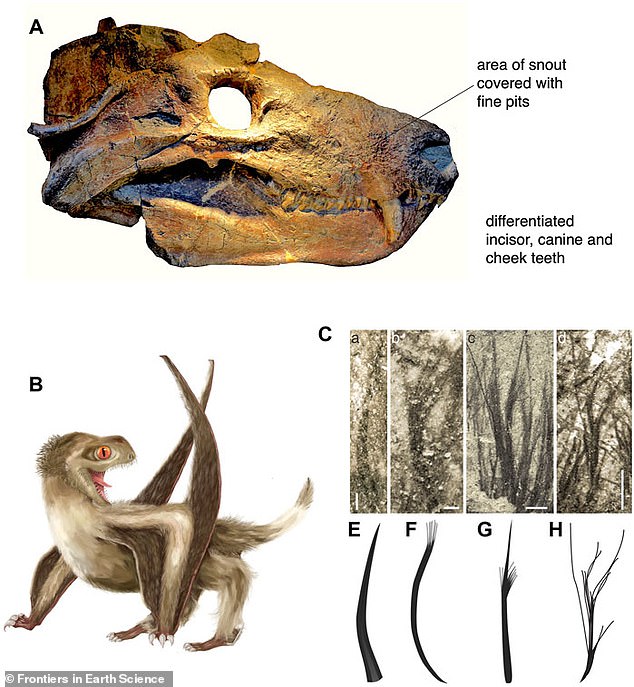 Mammals and birds in the the Early and Middle Triassic developed some form of insulation, hairs in the mammal line, feathers in the bird line

Other Triassic fishes from China were adapted to crushing shells,’ said Dr. Wu.

‘Several major groups of fishes, and even some reptiles, became shell crushers, with great pavements of teeth. We even found the world’s oldest flying fish, and this was probably for escape from the new predators.’

The latest Permian reptiles were slow-moving and used a kind of sprawling posture, like modern lizards, where the limbs stuck out at the side – all of which limited their stamina.

However, those that came after the Great Dying stood more upright, allowing them to move faster and for a longer period of time.

‘Biologists have debated the origins of endothermy, or warm-bloodedness, in birds and mammals for a long time,’ said Prof Benton.

‘But all kinds of evidence from study of the cells in their bones, and even the chemistry of their bones, suggests that both groups became warm-blooded in the aftermath of the great end-Permian mass extinction, early in the Triassic.’ 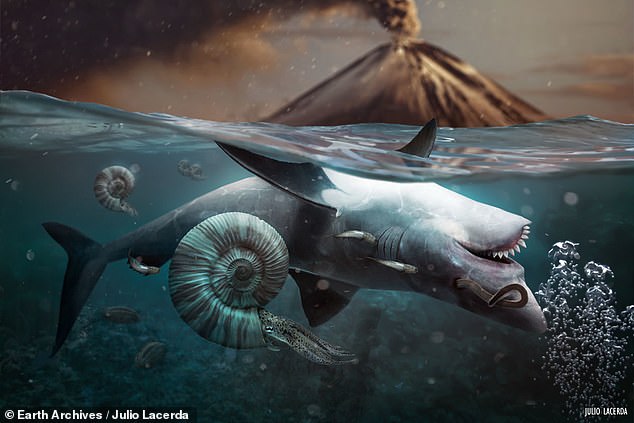 The Permian Extinction, dubbed ‘The Great Dying’, was triggered by a massive volcanic eruption that ran for almost one million years in what is today Siberia. Around 95 percent of marine life and 70 percent of life on land was wiped out

The origins of endothermy in birds and mammals in the Early to Middle Triassic is suggested by two other changes: their ancestors mainly became upright in posture at this time.

These animals stood higher on their hind legs, similar to modern dogs, horses and birds, which gave them more energy for longer strides.

And second, mammals and birds in the the Early and Middle Triassic developed some form of insulation, hairs in the mammal line, feathers in the bird line.

‘If this is true, and new fossil discoveries appear to confirm it, all the evidence is pointing to major changes in these reptiles as the world rebuilt itself after the end-Permian mass extinction,’ according to the researchers.

‘Altogether, animals on land and in the oceans were speeding up, using more energy, and moving faster,’ said Benton.

‘It also refers to predator-prey relationships—if the predator gets faster, the prey does too in order to escape.’

‘It was the same underwater as well,’ said Wu. ‘As the predators became faster, snappier, and smarter in attacking their prey, these animals had to develop defenses. Some got thicker shells, or developed spines, or themselves became faster in order to help them escape.’

‘These are not new ideas,’ says Benton. ‘What is new is that we are now finding that they were all apparently happening about the same time, through the Triassic.

‘This emphasizes a kind of positive aspect of mass extinctions. Mass extinctions of course were terrible news for all the victims. But the mass clear-out of ecosystems in this case gave huge numbers of opportunities for the biosphere to rebuild itself, and it did so at higher octane than before the crisis.’

The Permian Extinction, dubbed ‘The Great Dying’, was triggered by a massive volcanic eruption that ran for almost one million years in what is today Siberia.

Around 95 percent of marine life and 70 percent of life on land was wiped out.

Five times, a vast majority of the world’s life has been snuffed out in what have been called mass extinctions.

End-Ordovician mass extinction
The first of the traditional big five extinction events, around 540 million years ago, was probably the second most severe. Virtually all life was in the sea at the time and around 85% of these species vanished.

Five times, a vast majority of the world’s life has been snuffed out in what have been called mass extinctions. The most famous may be the End-Cretaceous, which wiped out the dinosaurs. Artist’s impression

End-Permian mass extinction (the Great Dying)
The largest extinction event and the one that affected the Earth’s ecology most profoundly took place 252 million years ago. As much as 97% of species that leave a fossil record disappeared forever.

End-Triassic mass extinction
Dinosaurs first appeared in the Early Triassic, but large amphibians and mammal-like reptiles were the dominant land animals. The rapid mass extinction that occurred 201 million years ago changed that.

An asteroid slammed down on Earth 66 million years ago, and is often blamed for ending the reign of the dinosaurs.