As we all wait for some sort of normality to resume in the world, our thoughts are understandably turning towards that first restaurant we’re going to visit or what pair of shoes we’re going to try on. We’re human, after all.

There is only so long we can keep ourselves occupied with the latest Netflix shows or a deal or no deal casino game before we want to venture out and about. Food is always a huge pull in that respect. Sometimes we don’t possess the skillset or the know-how to produce a killer piece of fried chicken or nail the perfect Ramen. That is exactly why we rely on our tasty venues to provide it for us! Not only do they suppress any cravings, but you can’t beat the atmosphere of a restaurant and the all-round enjoyable experience of sampling various different foods.

So, without further ado, we thought we’d go through some popular foods from around the globe that everyone will be desperate to get stuck back into again.

Mainly associated with Australia, the chicken parm is a chicken lovers delight. With melted parmesan and mozzarella, and a tomato and garlic sauce drizzled on top of a crispy chicken fillet, this Aussie pub dish is hugely popular and massively tasty. Australia claims it, but it has been seen in other parts of the world too.

A quintessential Canadian dish, Poutine is just about as tasty as it gets. Consisting of French fries covered in cheese curds and brown gravy, this delight doesn’t look the most delicious, but you’ll be desperate for more once you’ve taken that last bite. Labelled as one of the best drunken snacks you can get in Canada, Poutine is perfection.

Granted, you can make paella at home, but it doesn’t always taste the same, does it? Spain does this dish best, with an array of shrimp, lobster, mussels and cuttlefish combined with white rice and various herbs to make this Spanish classic hum. If you haven’t eaten authentic paella, you haven’t lived.

A British favourite, fish and chips has been around since the 1860s and has kept Brits fed and warm during the winter ever since. Soft fish in a crispy, light batter, made all the more tasty with a portion of fluffy chips and a drink of your choice. What more could you want?

A whole young pig slow-roasted for several hours, Lechon is a Filipino favourite and is enjoyed on special occasions throughout the year. It isn’t easy to cook and is best enjoyed out and about, that’s for sure. A national dish of the Philippines, Lechon is divine.

This can be created at home, admittedly, but it is another tasty treat that always seems to be done better in the hands of an expert. A shish kebab is a stick of joy consisting of lamb, beef, swordfish or chicken, accompanied with rice and vegetables. The perfect summer food. 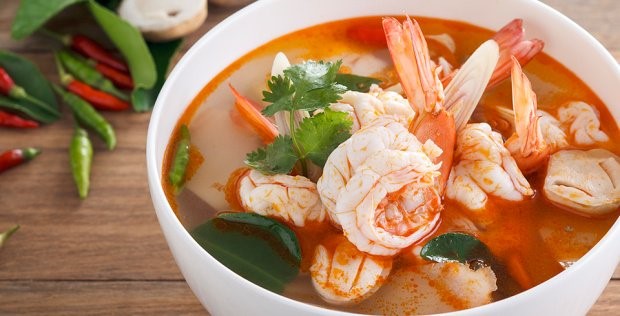 People tend to opt for Chinese or Japanese cuisine, but Thai food is just as good, if not better. A Thai dish worth trying is Tom yum goong, which is essentially a hearty soup filled with shrimp, mushrooms, tomatoes, lemongrass, galangal, kaffir lime leaves, coconut milk and cream. Not only is this dish incredibly tasty, but it’s damn cheap too.

Who doesn’t like a hamburger? Enjoyed all around the world, the humble hamburger is claimed by the Germans but is done well everywhere. McDonald’s is everyone’s favourite for this sort of thing, but the options are endless.