Inside Celebrity Masterchef’s finals week: Six stars face the chopping block as they present their mouth-watering meals to brutal judges

The latest season of Celebrity Masterchef is coming to an end.

Only six celebrities remain on the Channel 10 reality cooking series, with the upcoming finals week chopping them down to five.

A trailer has been released showing what’s ahead for the stars as they present their final dishes to tough-talking judges’ Andy Allen, Jock Zonfrillo and Melissa Leong.

The kitchen heats up: The finals week for Celebrity Masterchef is here as the last six stars on the show test their cooking skills to see who will make the final five

The teaser showcases their mouth-watering meals before cutting to a shot of them standing nervously alongside each another.

‘I want to fight hard because I want to stay in this competition,’ Archie Thompson is heard saying in the preview.

Preview: A trailer has been released showing what’s ahead for the six stars as they present their final dishes to judges’ Andy Allen, Jock Zonfrillo and Melissa Leong (pictured)

It then cuts to Dilruk Jayasinha pulling out a roast pork from the oven and carefully placing it on a table.

‘If this pork isn’t a perfect cook, my chances at semi-finals are in jeopardy,’ the comedian claims.

The trailer cuts to a montage of the celebrities working in their separate kitchens on their meals. 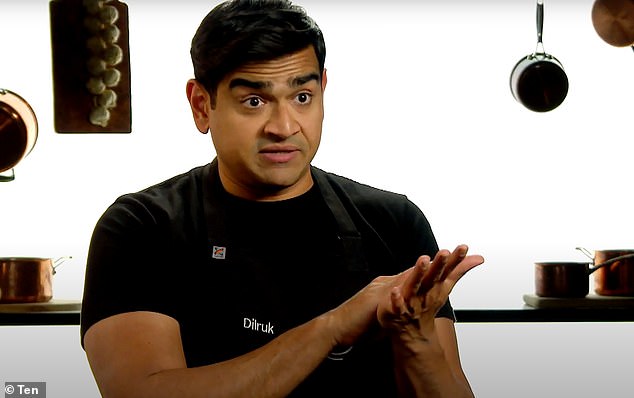 Could he take it home? Comedian Dilruk Jayasinha is in the running to win the series

‘I know it’s a matter of urgency,’ states Collette Dinnigan as she presses down on pieces of beetroot.

The promo finishes with Tilly Ramsay saying ‘it’s lucky that my Masterchef journey is about to come to an end’.

Celebrity MasterChef Australia continues Sunday at 7.30pm on Channel 10 And 10 Play On Demand