EXPRESS INFORMER > News & Politics > The dark side of reality TV: Towie’s Mario Falcone reveals what drove him to attempt suicide

He’s the 6ft 7in hunk who won the hearts of the nation on Love Island last year, but Ovie Soko is torn between pursuing a career as a reality TV star, or returning to professional sport.

With basketball caps for Great Britain and a place in the French Le Mans Sarthe team of the LNB Pro A, 29-year-old Ovie is at a crossroads.

To help him decide on the next chapter in life, Ovie speaks to fellow reality stars to get a feel for their experience of the industry – but while some revel in the limelight and make the most of the privileged lifestyle, others speak of the darker side to the business.

Despite driving a Lamborghini and being linked to a string of glamorous women at the height of his fame, Mario has turned his back on showbiz after it drove him to the brink – while Sarah now makes a living sharing X-rated photos on OnlyFans.

Mario previously confessed to trying to take his own life in 2013, following his split from fellow Towie star Lucy Mecklenburgh, who was falsely told he had cheated on her with Sugar Hut Honey Amy Broadbent.

Speaking to Ovie about the dark period in his life, Mario says while Towie ‘gave him a lot’, he believes he was ‘manipulated’ during his time on the ITV show.

‘Were things steered where I felt they were against me? Yes, 100 per cent,’ he claims.

‘You do get f***** over the producers and stuff. It hurts. The next day you just sit there and think, “I can’t believe they’ve done that to me, they’ve made me look like I’ve been an a***hole”, when you haven’t.’

Mario adds that the public can ‘proper hate you’ afterwards and reveals he’s received vile messages and death threats.

‘One said they hope I die from cancer,’ he recalls. ‘It got to the stage where it was affecting my mental health way too much.’

Mario, 32, references an episode where an accusation he’d cheated on then girlfriend Lucy was made the night before his birthday. 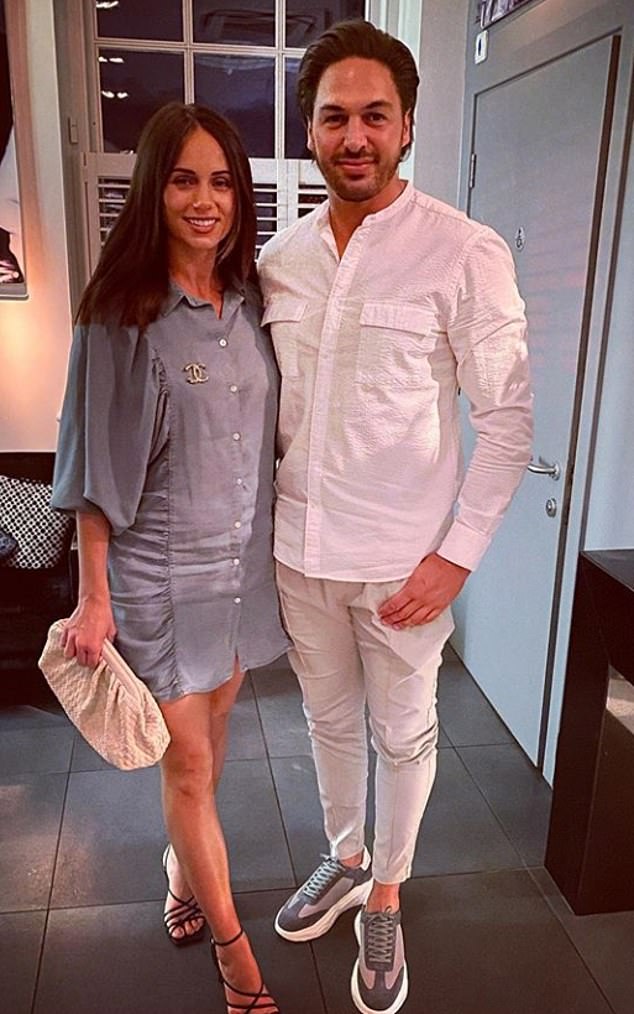 Mario, who is now engaged to Becky Miesner, pictured, with whom he has a son, adds that it upsets him not to look back on that time 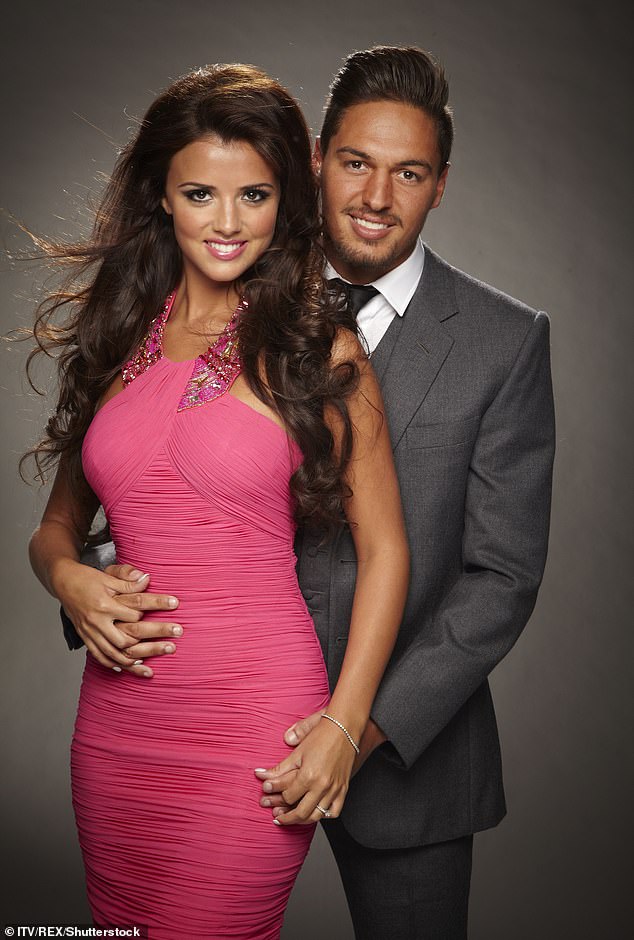 Mario reveals he’s received vile messages and death threats following his appearances in Towie, where he was accused of cheating on his girlfriend Lucy (pictured together in 2012) 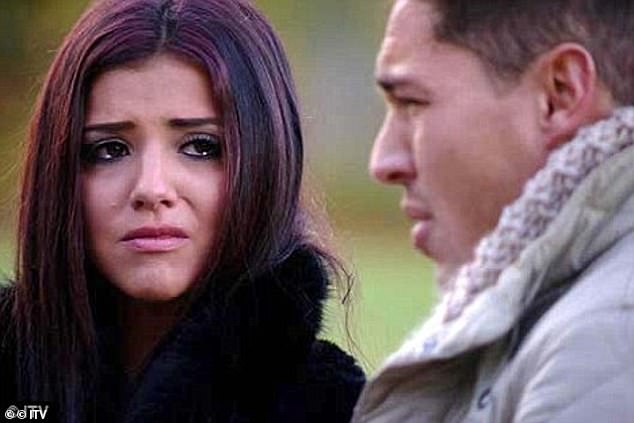 Mario previously confessed to trying to take his own life in 2013, following his split from fellow Towie star Lucy Mecklenburgh (pictured), who was falsely told he had cheated on her with Sugar Hut Honey Amy Broadbent

‘They let it happen, the producers, but without researching the allegation,’ he claims.

‘If they’d have researched it they would have been like, it physically couldn’t have been possible.

‘That came on the show, me as a cheat, then my girlfriend at the time had left me because of that reason, and the hate on social media was on another level, compared to anything else I’d had before, anyone, the strongest person would have crumbled.

‘In life I’m normally very good in any situation if it’s something where you can take back control – it was the one instance in my life where I didn’t feel like I had control of it, so I just wanted to get out of that situation and the only way I felt I could try to get out of it was to try and take my own life.’

Mario, who is now engaged to Becky Miesner, with whom he has a son, adds that it upsets him not to look back on that time.

Speaking after their meeting, Ovie reflects: ‘To think [Mario] could have missed out on having the beautiful family he does today, it could have been a real shame.’

Lion Pictures, who make Towie, provide all cast members with a psychologist as part of their duty of care. Towie producers maintained that nothing is faked and that they just follow ongoing stories – and claim the cast is never forced to say anything.

Later he meets Sarah Goodhart, 26, who appeared on Geordie Shore alongside Vicky Pattison in 2017.

But Sarah severed ties with the reality TV industry after posting an 18-minute long rant to YouTube in which she called the industry ‘corrupt’ and claimed being on the MTV show pushed her ‘so hard, to the point of near insanity’.

Having previously worked in a beauty salon, Sarah’s main income now comes from modelling on the OnlyFans website. 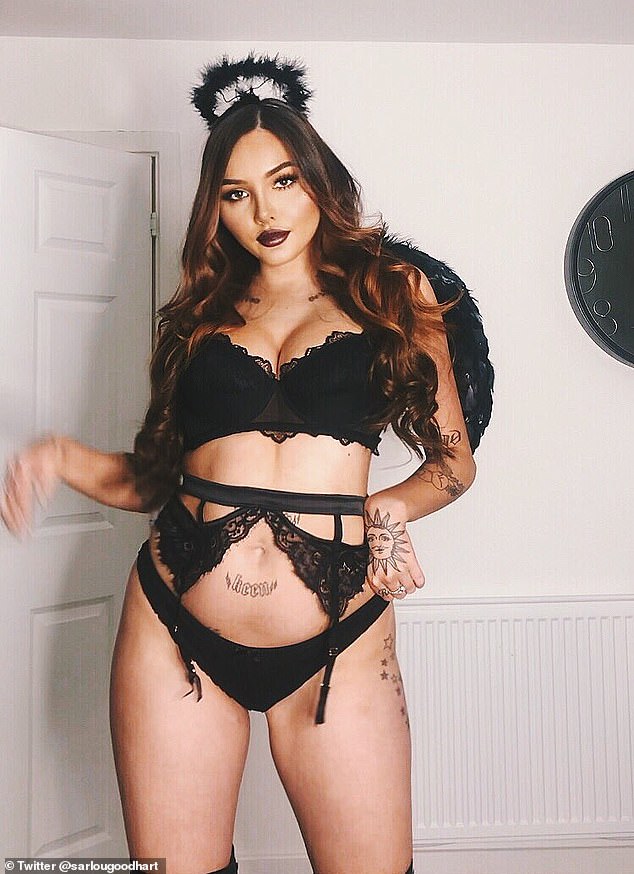 Having previously worked in a beauty salon, Sarah’s main income now comes from modelling on the OnlyFans website

‘It’s got a good return, it’s definitely worth doing and I can see why a lot of people do come out of reality television and go down this route because the money’s there for the taking, but it can be draining work.’

Insisting she is a feminist and that she won’t do this forever, Sarah says she has a savings target in mind and once she meets it, she’ll quit camming.

After her reality TV experience, Sarah admits she felt humiliated when she returned to normal work.

‘People just take the p*** out of you,’ she says, adding that she used to dance in clubs before going on TV.

‘People would just film you and they would take the p*** out of you, you’d see tweets about yourself… It’s like, how do you expect me to earn money when it doesn’t go the way you think it’s gonna go? 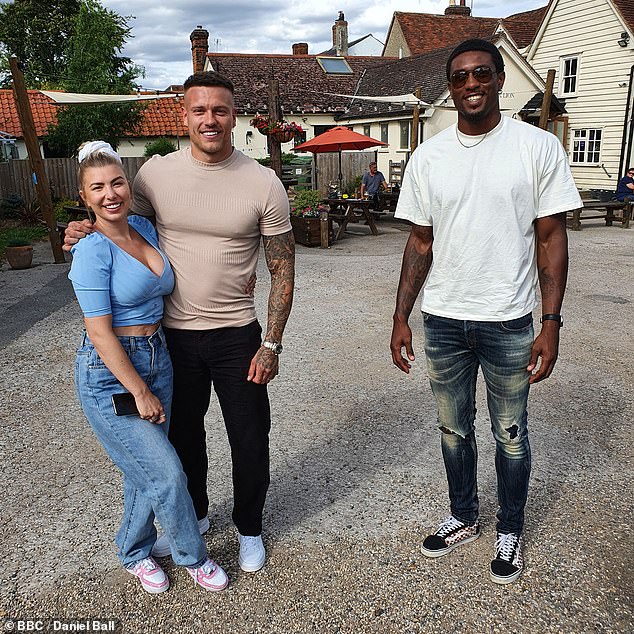 It’s not all doom and gloom; Ovie speaks to Love Island winners Alex and Olivia Bowen, who are well and truly cashing in on their fame

‘For a few months I just gave up on myself, I was like, I don’t see a future for myself, so I did get really dark.’

But it’s not all doom and gloom; Ovie speaks to Love Island winners Alex and Olivia Bowen, who are well and truly cashing in on their fame.

Olivia admits she does worry about ‘losing relevance’ and having to give up their affluent lifestyle.

‘If I lost this house I’d be devastated, but the reality that could happen is quite true,’ she says.

‘If I said the wrong thing… it could be gone in an instant. You do have a clock over your head.’

Ovie Soko: Life After Reality TV is available to watch on the BBC iPlayer from November 10.

If you have been affected by this story, you can call the Samaritans on 116 123 or visit www.samaritans.org.