He made for one of the world’s most improbable-looking billionaires. Dressed in gym shorts, crumpled T-shirts, and with unkempt hair, Sam Bankman-Fried’s appearance was hardly designed to inspire investors to trust him with their cash, though that is exactly what they did – for a while.

His exchange, FTX, last week admitted that it did not have enough funds to meet £4.2billion of demands from investors wanting their money back.

On Friday, it filed for bankruptcy.

The implosion of one of cryptocurrency’s biggest exchanges is nothing short of a disaster for the sector, according to one of the men closely involved – Changpeng Zhao. Known as CZ, he is the chief executive of rival exchange Binance and one of its founders.

‘It’s devastating,’ declared CZ, who found himself near the centre of FTX’s implosion, after announcing a week ago he would sell his holdings in FTX, igniting a run on his rival’s exchange.

During a rare personal appearance at a global financial technology conference in Indonesia on Friday, CZ said the collapse was part of a wider malaise stalking the cryptocurrency sector. But he admitted that his actions were ‘the straw the broke the camel’s back’.

With a degree of understatement, he said: ‘Consumer confidence is shaken. I think basically we’ve been set back a few years. I think, rightfully, regulators will scrutinise this industry much, much harder – which is probably a good thing to be honest.’ He said of small investors: ‘Having that setback short term is very painful. But longer term this is another wake-up call to say – look, this is a new industry. There are a lot of risks. We need to learn how to deal with these risks.’

The crash of FTX has thrust the little-known world of young male ‘crypto bros’ into the spotlight. Renowned for their scruffy appearance, obsession with Lamborghinis and a propensity for being called by their initials, these cryptocurrency advocates have mostly operated in the shadows. 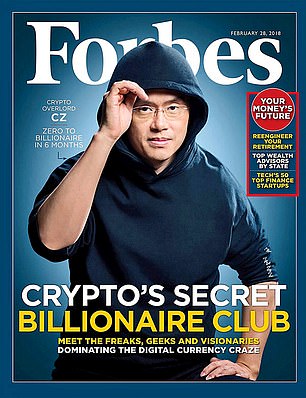 The deep rivalry between CZ and Bankman-Fried, who also likes to be called by his initials, SBF, has sent ripples across the sector that might yet bring it to its knees.

A few days after CZ’s announcement that he had sold out of FTX, Binance said it was considering a rescue of its rival, only to back out later. The U-turn came, the company said, over concerns with FTX’s finances and suggestions of ‘mishandled customer funds’.

SBF hit back with a cryptic tweet on Thursday, saying: ‘At some point I might have more to say about a particular sparring partner, so to speak. But you know, glass houses. So for now, all I’ll say is: well played; you won.’ But SBF may have other issues to occupy his mind in the short-term. Reuters last week reported $1billion of customer funds have vanished after being transferred from FTX to Alameda Research – a company founded by Bankman-Fried and run by his one-time girlfriend Caroline Ellison. SBF appeared to question the accusation, responding only ‘???’, when contacted by Reuters.

The wider turmoil has sent the price of Bitcoin to its lowest level since December 2020. Investors have also pulled out of rival cryptocurrencies such as ethereum and dogecoin in their droves.

Some analysts warn that this could be the beginning of the end for an asset class that never fully found favour with mainstream investors. 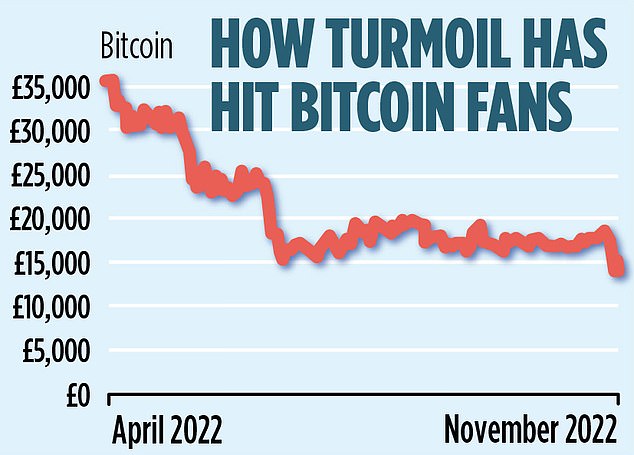 Neil Wilson, an analyst at trading platform Markets. com, said: ‘This is the moment the industry has been exposed for what it is. Crypto has no intrinsic value and when the liquidity dries up there is nothing left. It is amazing these people have managed to get away with it for so long.’

There are also fears over whether it could do any damage to the wider financial sector, although traditional finance and banking houses have kept crypto at arm’s length. For many, the antics of SBF and CZ are proof this is an industry that has failed to grow up.

SBF still lives with ten friends in a penthouse in Nassau, the capital of the Bahamas, where FTX also has its head office. According to co-workers he can often be found sleeping on a bean bag next to his desk, and is said to have worked so hard in the early days of the firm he rarely showered. 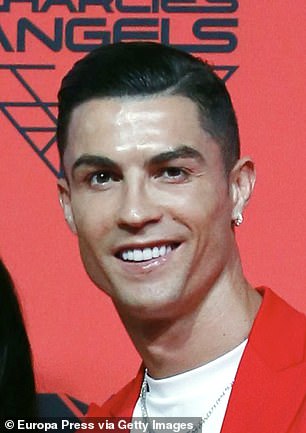 ‘Every minute you spend sleeping is costing you X thousand dollars,’ he is reported to have told colleagues.

Despite their nerdy demeanours, both men have successfully courted the great and the good in a bid to sell crypto to the non-believers.

CZ, who has even featured on the cover of the influential Forbes business magazine, is renowned for his lavish parties in his Dubai mansion and was spotted mixing with royalty and celebrities at the Abu Dhabi Grand Prix in December last year. Earlier this year, Binance teamed up with Portuguese football legend Cristiano Ronaldo to launch collections of non-fungible tokens. These are shares in digital assets, such as sports memorabilia or art.

Few will sympathise with SBF and CZ, who flew too close to the sun. The tragedy is the gullible investors who went along for the ride.