Monstrous is one of the politer ways it has been described. Some have compared it to a civic centre, a Bond villain’s lair or a Holiday Inn.

But everyone agrees that Grand Designs’ latest talking-point has got people talking.

Made from 34 zinc-clad shards jutting over seven metres high into the Devon sky, the structure in last week’s opening episode of the latest series is 70 metres long and consists of 300 timber beams and triple-glazed glass units, each weighing up to a ton.

What’s more, it went almost £2 million over budget and took more than three years longer than expected to complete.

By halfway through the episode, viewers were fully expecting the building in question — Hux Shard — to be another of the Channel 4 programme’s overly ambitious projects, destined to fail and in the process break up the stressed couple whose hare-brained idea it had been.

What is arguably Grand Designs’ most audacious project to date has divided opinion. While some have praised it, others are scornful about a building that ended up costing its wealthy owners £2.5 million and from the outside resembles, in Kevin McCloud’s words, ‘a giant zinc monster’

Come the final advert break, they could be forgiven for expecting presenter Kevin McCloud to return for his last visit to an abandoned heap of rubble on site.

But Hux Shard hasn’t played out to the predicted narrative. The 6,000 sq ft sculptural home, said to have been created to mimic the Dartmoor tors, has been completed.

Its owners, 37-year-old tax consultant Joe Priday and his wife Claire, 42, a marketing executive, have just moved in — their children Jasmine, ten; Evan, five; and three-year-old Rory delighting in the ‘racetrack’ 229ft-long corridor that runs through the house.

With a £125,000 kitchen, a 6ft-wide front door that opens with facial recognition, LED lights embedded in the walls and a floor suspended off the ground, the four-bedroom home is as high-tech inside as it is mindboggling outside.

And Joe, who had aspired to create ‘one of the best homes on the planet’, is delighted.

‘I am completely and utterly satisfied — and that’s quite rare for me,’ he said.

But what is arguably Grand Designs’ most audacious project to date has divided opinion. While some have praised it, others are scornful about a building that ended up costing its wealthy owners £2.5 million and from the outside resembles, in Kevin McCloud’s words, ‘a giant zinc monster’.

The unusual home, which Kevin McCloud likened to a ‘spaceship’ featured an open plan living area as well as a huge gym and games room

Among the verdicts on social media were ‘staggering vanity project’ and ‘sickening’, while Joe, whose six expensive cars in the garage provided insurance lest he run out of money (he didn’t), was described as ‘smug and unlikeable’, content to ‘throw’ cash at an ostentatious house with scant regard for those who can’t afford to get on the property ladder at all.

As one viewer put it: ‘At least four or five families could have built more-than-adequate, sustainable houses on that plot and all got to enjoy the views.’

So how was Hux Shard — atop a hill, overlooking rolling countryside near the village of Pinhoe on the outskirts of Exeter, within metres of other ordinary homes — granted planning permission, when getting the go-ahead to build rural homes is usually as hard as Dartmoor granite?

And what on earth do the neighbours think?

Hux Shard sits behind a tall fence with a newly planted beech hedge on a narrow lane. Only the points of the roof can be seen from the road, but neighbours on the same side of the road can see the whole of it from their gardens.

Opinion is mixed in this genteel community of several homes within a stone’s throw of the property — and some people spoke to the Mail on condition of anonymity, so as not to fall out with the new residents.

One described it as ‘a bit of an eyesore’, while a second, whose view of the countryside has been blocked by the shards, was admirably philosophical: ‘I don’t want to sound like Prince Charles, not liking modern buildings.

‘Maybe in 50 years’ time people will drive past and say “Oh, what a wonderful building”. I’m trying to be kind but our view was more attractive before that structure went up. I would prefer it wasn’t there.

‘Art is a matter of taste and I’m not sure it’s to my taste.’

Then again, Joe, a former director of a wealth management company who wanted the house to have the wow factor of a collectable Ferrari, is nobody’s idea of an average homeowner.

He has made money from advising people how to invest, spotting opportunities in unlikely places.

Quiet-spoken Claire, who admits she is ‘not as ambitious’ as her husband, says her main ambition is ‘to keep the family unit happy and alive, really, most days’.

The couple bought a bungalow next door to their current house in 2013 and paid £65,000 for the adjoining paddock. Shortly afterwards they applied for planning permission to build there, not thinking for a second it would be granted. It is notoriously difficult to obtain permission to build new rural homes — and at the time their local authority, East Devon District Council, was being criticised for allowing developers to build new housing estates in countryside locations.

But a loophole in the National Planning Policy Framework, then known as Paragraph 55 and now as Paragraph 80, offers an exemption from all planning permission constraints for houses considered architecturally outstanding.

Both Claire and Joe admitted the project was becoming ‘a bit excessive’, with the kitchen costing over £125,000. Pictured, the living room

You may be more likely to get away with a sci-fi creation than with a run-of-the-mill semi — so Joe enlisted the services of architect Mick O’Connor. ‘We said we’ve got to come up with something that’s unusual. And we did,’ says Mick, 71, from nearby Chagford and the founder of architecture company Squirrel Design.

Deciding that going ‘up in height’ would ‘create hassle’ with planners, Mick came up with the linear shape of the house and the concept of using glass to make the most of the stunning views, combined with angled walls to look like shards.

What he didn’t do, however, was base the design on the Dartmoor tors — rock formations some 20 miles away. ‘To be frank, Grand Designs made that up,’ Mick says.

‘We came to the conclusion that this building is on a hillside. It’s going to be seen. We wanted it to look like a work of art, a sculpture.’

Perhaps surprisingly, there was only one objection to the plans, submitted in 2017.

‘We said it would affect the views. We’ve been here for 21 years,’ the objector told the Mail. ‘There was a lovely green field there.’ 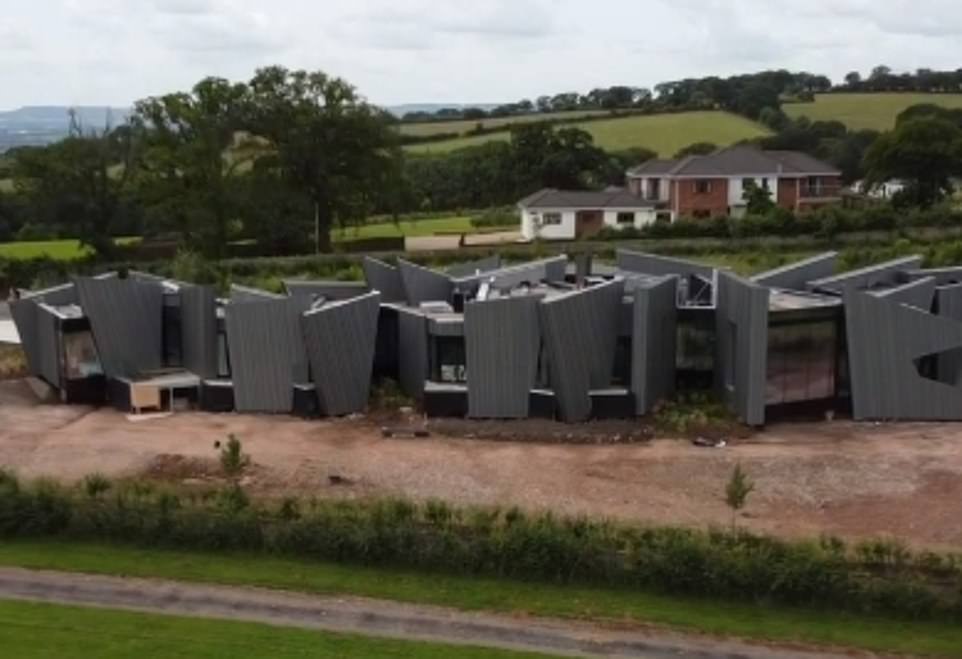 Yet farmer Mike Wills, 65, who rents the land behind Hux Shard, feels differently: ‘There are hundreds of houses going in at the bottom of the village and I’m not sure how good that is for the community and the environment.

‘Something like this is great for Exeter and Devon. It’s a high-value house and shows what can be done with a bit of effort and thought.’

Joe, Mick says, was instantly sold on his idea, if shocked: ‘There were probably a few complimentary expletives but he has imagination.’

And cash, of course — which helped when it became clear that the ambitious structure would cost a lot more than the original £825,000 estimate.

The project’s structural engineer, Phil Thorpe of TWP Ltd, explains that although the shards look as if they are coming straight out of the ground, they are actually attached to timber frames which sit on top of steel columns sticking up from the foundation.

Phil was concerned about the impact of the weather. ‘You don’t see many sailing boats on the water in a 20-30mph wind, yet we have to design one of those shards to resist 90mph wind and not move,’ he said, adding that another challenge was ‘trying to make a frame so rigid it doesn’t defect so much that it cracks those very expensive pieces of glass’.

Thirty-six glazed units costing £200,000 including installation were fitted to the frames with brackets ‘so the bottom bracket holds the pane in place. The clamp at the top stops it blowing out in high wind,’ says Phil. ‘It looks like this glass is frameless because it’s all hidden.’ Fitting the glass proved so complex, with some windows being six metres high, that the original glaziers were ditched.

Phil Catterall, whose glass manufacturing firm System 3 Ltd took over, admits ‘the guys in the factory were swearing at me for taking the order on’ as the project ‘pushed the boundaries of what is possible in terms of glass processing’. He adds: ‘As a business, we are very proud of what we have achieved. It was one of the craziest and most difficult jobs they have ever had on Grand Designs.’

Then on top of the structural problems, there were complications and cost increases caused by Brexit and then Covid.

David Thomas, 73, who lives a few doors away, says: ‘The actual building doesn’t affect us but it went on for so long.’

A retired air traffic controller who lives in a cottage that he and his wife built 30 years ago, he adds: ‘We can’t knock them for building, as we built our own home here. But [Hux Shard] isn’t really fitting in the surroundings.’

While neighbours’ patience may have started to wear thin, though, Joe — who at one stage was spending £20,000 a week on labour alone — remained remarkably sanguine about the eye-watering costs. ‘The thing is, it was well within the client’s affordability,’ says Mick.

By the time 30km of cable had been laid, Claire who had become ‘more emotionally involved’ by choosing interiors, including that kitchen. With four ovens, worktops made of Dekton — more expensive than granite — and an extractor fan that rises from the worktop , it is, Kevin McCloud said, ‘like being in an alien world’.

Equally other-worldly are the angular windows, LED lighting in the walls and floor, and the glass roof — with sloping slides joined by a short vertical wall — that allows in the morning and evening sun.

The energy-efficient house runs on solar panels and an air source heat pump, while a half-metre gap between the ground and the frame ‘regulates temperature and moisture’, says Phil Thorpe.

The engineer admits he is still terrified by the thought of shattered glass, though. ‘The next gale-force wind we have, I’ll think, hmm, is it all right?’ he says, adding hurriedly: ‘It’s always all right.’

Neighbour Mike Wills is a fan: ‘The finished thing is great,’ he says. And Claire also sounds happy, if a bit shell-shocked: ‘I could never in my wildest dreams have thought I’d live in such an amazing house.’

Mick says the Hux Shard has ‘got people thinking that houses don’t have to be the sort you see drawn at infant school, where they have a door in the middle and a window each side. It doesn’t have to follow the prevailing orthodoxies.’

Certainly, this one doesn’t.

Yet as one neighbour remarked: ‘I prefer thatched farm homes. But each to their own.’