Is Chris Scott after Leon Cameron’s job at GWS? David King says Cats coach’s comments about Giants show he has ‘put his name up in lights’ for a crack at steering Sydney side

Alastair Clarkson is widely thought to be a shoo-in for the vacant GWS coaching job after Leon Cameron stepped down on Thursday – but one of the AFL’s top experts has pinpointed a sign Geelong coach Chris Scott is making a push for the role.

David King pointed to Scott’s gushing comments about the Giants after Geelong dominated them on their way to a 53-point win last Saturday as evidence he’s keen to switch to the Sydney club.

Scott was full of praise for the amount of talent at GWS, saying the side is ‘stacked’ and lauded the Giants for shading his Cats in contested ball despite the heavy defeat.

‘I should speak for myself – I understand exactly what it’s like to be in a fledgling AFL market,’ Scott said. 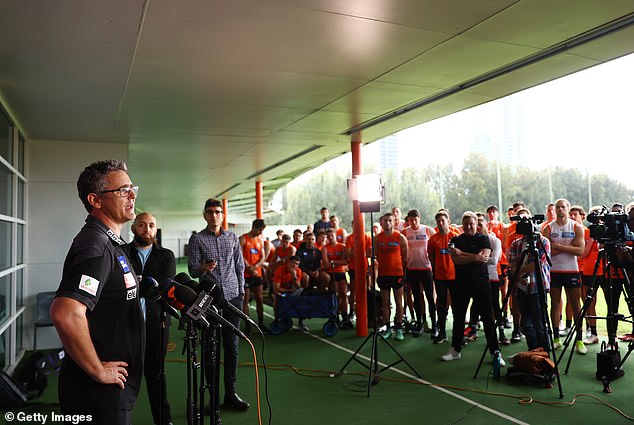 Leon Cameron’s players watch in stunned silence at his resignation press conference. The strength of the club’s list would be a huge drawcard for his replacement

‘I’m just aware of the challenges you have in a non-traditional market.’

King told SEN Radio that Scott is off contract with Geelong at the end of the season and his words show he could be ‘campaigning for at least a phone call’ from GWS.

‘I think he was saying everything I bring to the table complements what you guys have already got and what you are now going to be chasing,’ King said.

‘I think he has put his name up in lights for [GWS CEO] Dave Matthews to at least make the phone call.’

Scott won the 2011 flag in his first year with the Cats and they’ve been a force every year since. But King believes a new challenge could draw him away from Geelong. 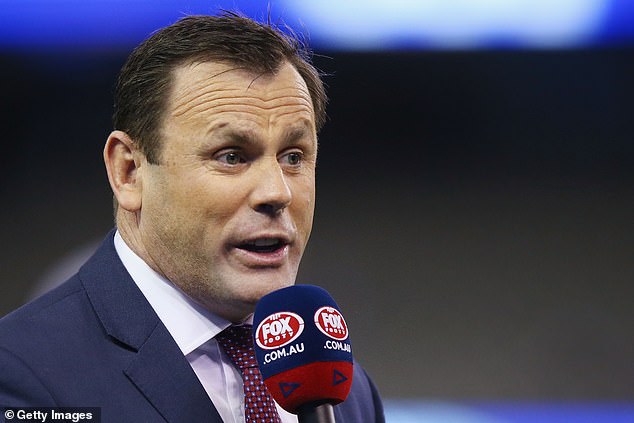 ‘He’s a career coach in my eyes and he’s a wonderful coach, he’s been an exceptional coach.’

Even if Scott were to throw his hat in the ring, he’d likely be the second-favourite to get the job behind four-time premiership-winner Alastair Clarkson.

On Thursday night the ex-Hawks coach revealed he’s open to returning to the AFL, but would only make a comeback if he felt he could lead a club to win a flag.

The Giants have a good enough list to make a quick return to the grand final – which they featured in for the first time in 2019 – a distinct possibility.