It was certainly a fairy-tale ending for Carrie Symonds , the Conservative PR girl who finally married her ‘boss’ in a secret 30-minute ceremony in the Lady Chapel of Westminster Cathedral on Saturday

She wore a stunning embroidered white dress without a veil and a crown of flowers as she walked down the aisle to the strains of classical music.

It was certainly a fairy-tale ending for Carrie Symonds, the Conservative PR girl who finally married her ‘boss’ in a secret 30-minute ceremony in the Lady Chapel of Westminster Cathedral on Saturday.

Yet the path that led to the altar where a ‘besotted’ Boris Johnson was waiting to exchange vows (for the third time) was anything but.

The succession of scandals and squabbles which seemed to dog their relationship – almost inevitable perhaps given the dramatis personae and the circumstances – must have made the weekend all the sweeter for Miss Symonds, 33.

The naysayers said it wouldn’t last after all, that she herself was on the make anyway.

And who can forget that screaming match at her flat in Camberwell, south London, overheard by nosey neighbours when she could be heard shouting: ‘Get off me… Get out of my flat!’

Friends denied that they were on the verge of breaking up and insisted the row nearly two years ago had been just a lovers’ tiff. And so it proved to be.

Yet, the intrigue and the whiff of controversy continued right up to the ‘cloak and dagger’ operation surrounding their nuptials – just six days after save-the-date cards were sent to a handful of close friends and family telling them to keep July 30, 2022, free for their wedding.

It was an elaborate ruse, of course. Even Downing Street aides had been unaware that they were tying the knot.

They had apparently been planning it all for the past six months.

Many, however, were surprised to learn that the couple were allowed to marry in Westminster Cathedral, the mother church of the Roman Catholic Church in England, because Mr Johnson, 56, is twice divorced.

But this was not an impediment, we were told, because neither of his previous marriages were within the Catholic Church. 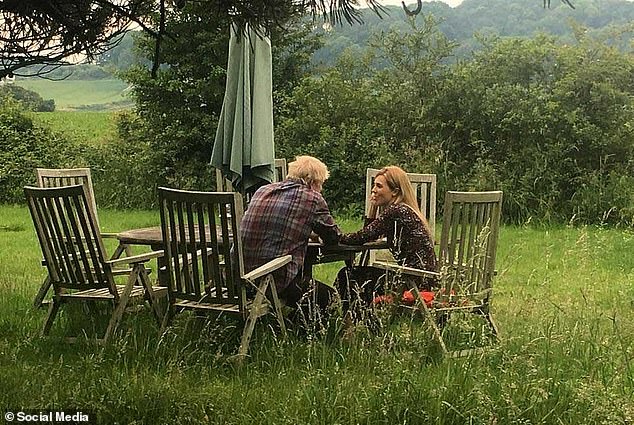 Even Downing Street aides had been unaware that they were tying the knot. They had apparently been planning it all for the past six months

It was as if this was the first time, in other words, he had uttered the words ‘I do’ – at least in the eyes of the church hierarchy. Miss Symonds is a Catholic and Mr Johnson is the first baptised Catholic to become Prime Minister.

Covid rules limit weddings to 30 guests at the moment. Might this, in the circumstances, have proven convenient for Mr Johnson – avoiding the expense of a more lavish affair and awkward questions about why certain family members opposed to the marriage might be missing? Even Mr Johnson’s father Stanley found out only a few days ago.

Even if they had wanted a much bigger celebration, their joint finances would not have stretched that far, a source told us. The fact that Mr Johnson had to repay Tory donor Lord Brownlow for the controversial Downing Street flat refurbishment didn’t help.

‘It’s no secret Boris is broke,’ said a friend, who was not at the wedding. ‘But having the wedding meant it had to take place under Covid restrictions with only up to 30 guests allowed including the bride and groom.’

Had they waited until later in the year they both agreed that a grand reception would have sent the wrong signals as the country emerges from the gloom of the pandemic.

Miss Symonds is also said to be sensitive about her nickname ‘Carrie Antoinette’ – which she was dubbed in some quarters – after hiring society interior designer Lulu Lytle.

‘They won’t be able to say that now after the celebration consisted of a few drinks at Downing Street,’ the friend added.

It is also unlikely that everyone would have accepted an invitation.His four older children by his second marriage to Marina Wheeler were reportedly upset by the relationship, prompting his eldest daughter, Lara, a journalist five years younger than Miss Symonds, to write on Instagram (back in April 2019) that the past 12 months had been the ‘hardest and the most hurtful year’ of her life. 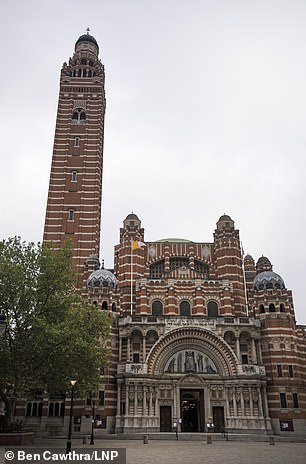 ‘It’s no secret Boris is broke,’ said a friend, who was not at the wedding. ‘But having the wedding meant it had to take place under Covid restrictions with only up to 30 guests allowed including the bride and groom

Her father was publicly linked with Carrie Symonds shortly after he split up with Marina, his wife of 25 years, in 2018.

Miss Symonds was described at the time as a party-loving Tory aide. She was no stranger to complicated romantic entanglements: Her father was a journalist on The Independent, her mother, one of the paper’s lawyers. Both were married to other people at the time that she was born, and they never lived together.

She was brought up by her mother in East Sheen, in the London suburbs. After attending Godolphin and Latymer, one of the leading private girls’ schools in the capital, she went to Warwick University to study art history and theatre studies.

After graduating she flirted with the idea of becoming an actress but joined the Tory party media machine in 2009 instead.

She rose quickly through the ranks – from press adviser to head of broadcast at Conservative campaign headquarters in the run-up to the 2015 general election and then, in 2018, the party’s director of communications.

Miss Symonds first met Mr Johnson when she worked on his campaign team for re-election as mayor of London.

Gossips quickly noted how she was inclined to praise him when he was Foreign Secretary. ‘This is really worth watching,’ she tweeted, posting a link to a speech he had made. ‘Boris absolutely brilliant in debate on Brexit and Foreign Policy earlier this week.’

Soon tongues started wagging and – in the time-honoured fashion – they were said to enjoy a ‘strong friendship.’

Her apparent influence over Mr Johnson – whose chequered private life included a first marriage to his girlfriend at Oxford, Allegra Mostyn-Owen, as well as a child with art consultant Helen Macintyre – alarmed some Westminster power brokers.

Rumours about their ‘strong friendship’ intensified after Mr Johnson was reportedly spotted in Rules restaurant in Covent Garden with a ‘young attractive’ blonde woman.

They are said to have spent two hours at a corner table with two bodyguards nearby. Proof of their growing closeness, for many at least, came when he attended her Abba-themed 30th birthday party.

‘Crikey,’ said one pal at the time. ‘He must be really smitten to endure that.’

In the weeks that followed, they were variously described as ‘inseparable’ and later as ‘very much in love’. Miss Symonds, it emerged, had a picture of a smiling Mr Johnson as a screensaver on her phone and she called him ‘Bozzie Bear.’ It was not long before he had moved into her flat in Camberwell.

Friends commented, meanwhile, on Mr Johnson’s new slimline look. He had lost 18lb, he would later admit, for which he credited his girlfriend who was keen on yoga, healthy eating and protecting the environment.

When did their romance receive the official stamp of approval? It was probably in September 2019 when Miss Symonds became the first unmarried partner of a serving Prime Minister to visit the Queen at Balmoral on the traditional annual engagement.

But she really came into her own during the election campaign three months later, demonstrating what some called a masterclass in how to become a successful First Lady – proving that this was a relationship likely to last. The couple announced their engagement in February the following year when they revealed they were expecting their first child.

It is thought Mr Johnson proposed during a break in Mustique over Christmas – with good reason.

Miss Symonds posted an intimate picture of him tenderly kissing her cheek, accompanied by the following explanatory note: ‘I wouldn’t normally post this kind of thing here but I wanted my friends to find out from me…

‘Many of you already know but for my friends that still don’t, we got engaged at the end of last year… and we’ve got a baby hatching early summer.’

Their baby son, Wilfred, was with them at the wedding.

Among the guests was her closest female friend Nimco Ali, a campaigner against female genital mutilation, along with the journalist Alex Wickham. They are both reportedly godparents to Wilfred.

‘People should give some credit to Carrie,’ said the friend who spoke to us. ‘She’s just got married to one of the most famous, recognisable men in the world – and no one knew. It’s astonishing nothing leaked. She kept it really tight and her inner circles are loyal and never said a word.

‘The key to the secret? She kept the politicians out of the loop.’

In pictures, the story of Boris and Carrie’s courtship 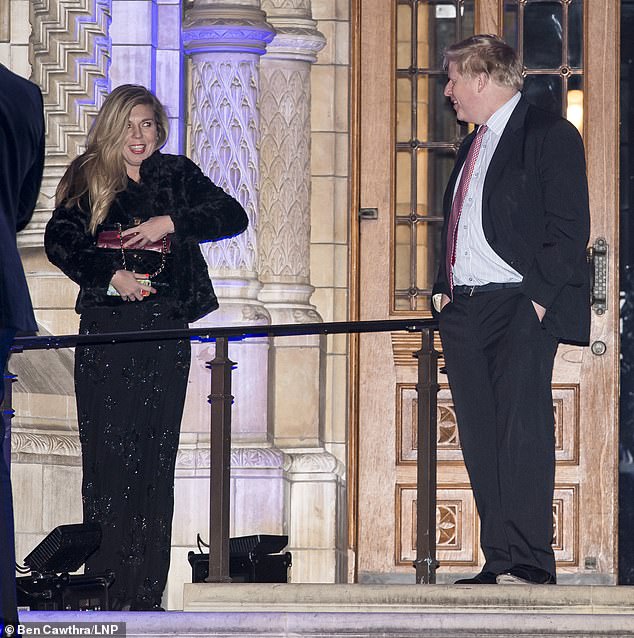 February 2018: Carrie and Boris stand judiciously apart when leaving a Conservative fundraising ball held at the Natural History Museum – but Boris’s smitten look says it all 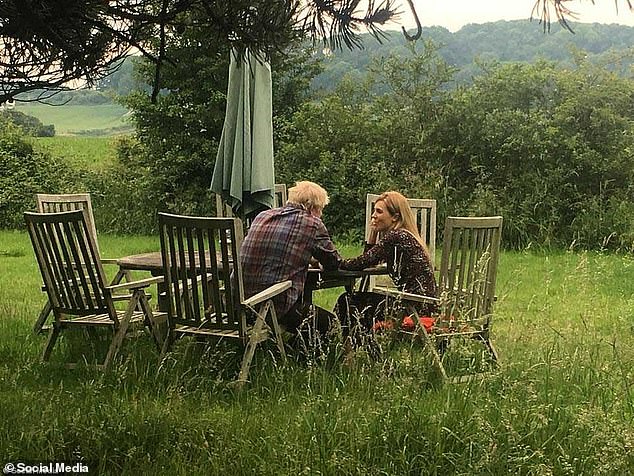 June 2019: Days after police were called to a blazing row at Carrie’s flat in Camberwell, south London, the couple are pictured all smiles in the Sussex countryside. It reassures the world that the Boris and Carrie show will go on 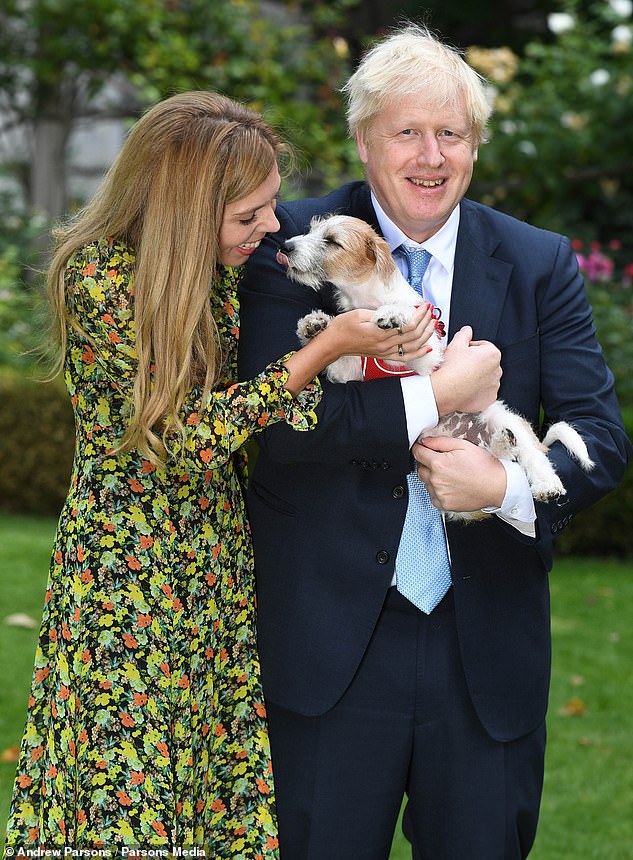 September 2019: The couple cement their now much quieter relationship by adopting Dilyn, a Jack Russell cross rescue puppy, who proves invaluable on the election trail. However, his toilet training may not have gone as smoothly… 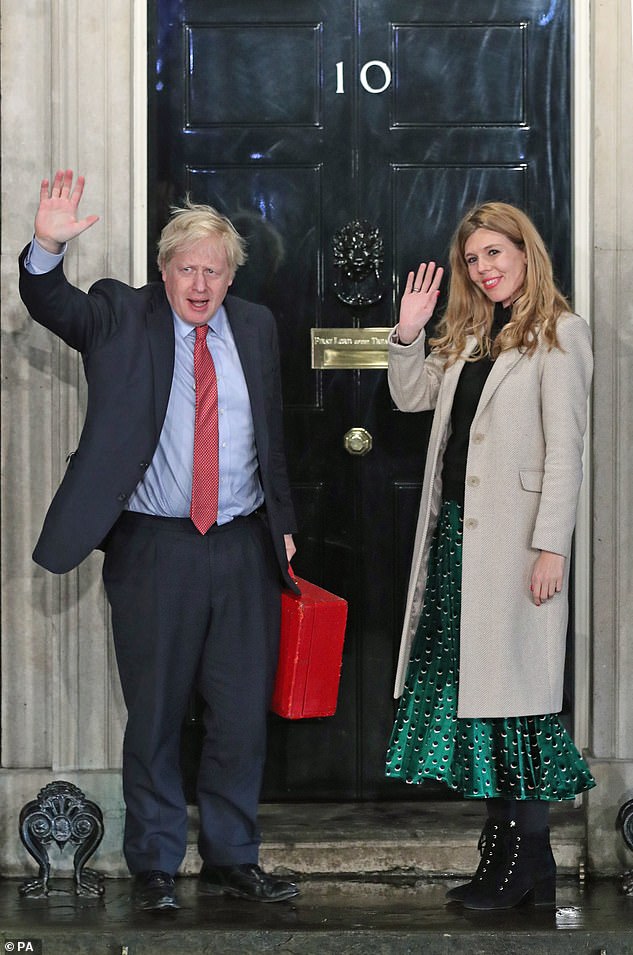 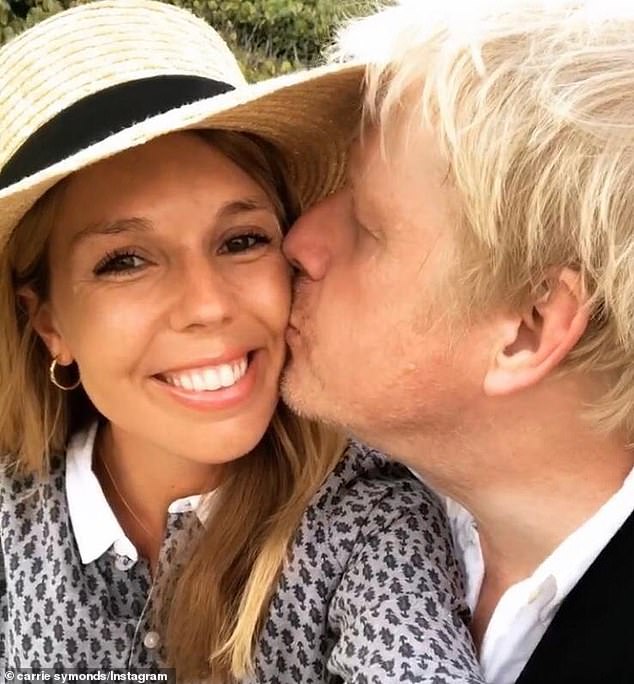 February 2020: Carrie announces in a post on Instagram that they’re engaged and expecting a baby. A beautiful oval-cut emerald surrounded by diamonds and platinum, presented to her by Boris, seals the deal 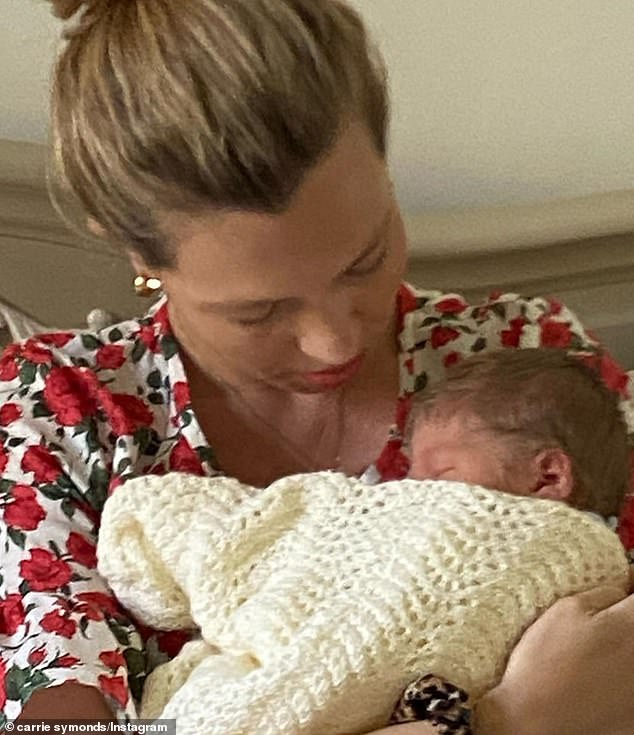 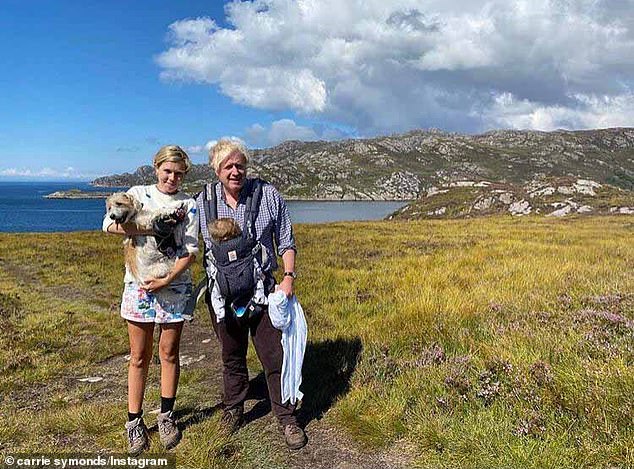 August 2020: They enjoy a quick family holiday to Scotland during an easing in lockdown restrictions 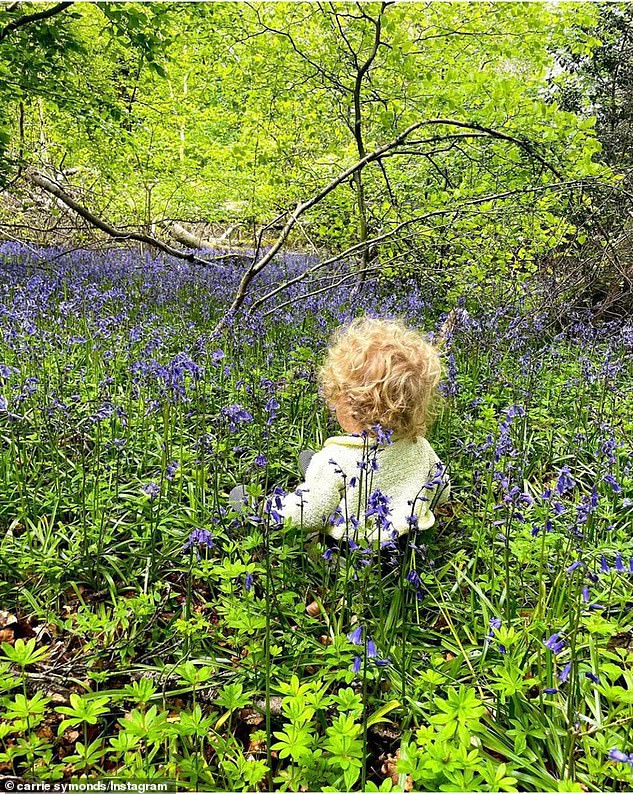 May 2021: On the same day as their secret wedding, Carrie posts a picture of Wilfred surrounded by a sea of bluebells on a day out

It’s been nearly 200 years since a prime minister tied the knot while in office.

Boris Johnson follows in the footsteps of Lord Liverpool – who married Mary Chester in 1822.

Lord Liverpool succeeded Spencer Perceval, who was the first and only British premier to be assassinated. Miss Chester became his second wife after his previous spouse Louisa, Countess of Liverpool, died in 1821 aged 54.

A stroke forced Lord Liverpool to retire after close to 15 years in power and he died the next year aged 58.

Labour leader Sir Keir Starmer wished the couple a ‘happy life together’ – but some of his MPs reacted with jibes.

Shadow minister Karl Turner wrote: ‘Isn’t it awful that when our PM gets married, people ask, ‘Who paid?’ ‘