The stylish grandads said on Monday that Tanya deserves a second chance after ‘making a mistake’ and ‘digging a hole she couldn’t get out of’.

It comes after the makeup artist, 40, finally confessed during Sunday’s season finale to taking a photo of the show’s production schedule and using it to gain an unfair advantage over the other teams.

‘She made a mistake’: The Block winners Mitch Edwards and Mark McKie have forgiven Tanya Guccione for masterminding the whiteboard cheating scandal

Mitch, 59, and Mark, 60, shared a photo to Instagram of themselves with Tanya and husband Vito on auction day at Bronte Court.

In the lengthy caption, they said Tanya had found herself caught in a lie after making an ‘error of judgement’ early in the season.

‘Tanya, the purple headed girl and the face of the big lie of The Block. She made a mistake,’ they began. 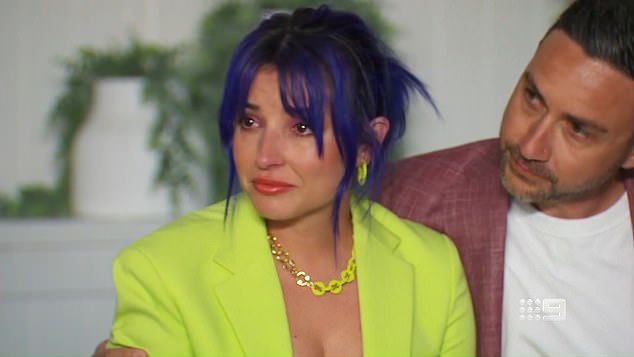 Human frailty: The stylish grandads said on Monday that Tanya deserves a second chance after ‘making a mistake’ and ‘digging a hole she couldn’t get out of’

‘Have you ever made a mistake and tried to cover it up, it gained momentum and before you knew, there was no way out, you’d dug such a big hole you couldn’t see any way out?

‘Imagine doing this on the biggest show on Australian television. This is what happened to Tanya.’

The couple insisted Tanya was a good person who simply ‘stuffed up’.

They wrote: ‘We know her: she’s good, but she stuffed up. We too have made mistakes; you all saw me (Mitch) with my inside-head thoughts that I blurted out.

‘If you’ve ever made errors in judgement in your life that have embarrassed you, please consider what Tanya has gone through and is dealing with before you judge her.

‘She deserves a second chance. We know this is difficult and we’ve had time to talk with Tanya and support her to move forward, Please join us and give Tanya a chance; we all deserve it.’

Mitch and Mark were praised for their ‘classy’ response to Tanya’s deception, with The Block host Shelley Craft commenting: ‘If the ones affected most are happy to move forward then that should be good enough for everyone.’

One viewer wrote: ‘Very noble of you both. It just shows that you are both full of class and style and pure elegance.’

Another added: ‘Well said, with your usual class, grace and love of others.’

Tanya herself responded: ‘A million thank you’s to you both for this post. Truly you could have shared anything and you chose to be kind and understanding. Thank you.

‘We know we had our moments but it’s just a moment captured in time – it’s not forever… I’m so grateful to call you friends. Your forgiveness means more to me than money.’

‘Fair enough, but she will never be trusted again,’ one commented, while another added: ‘You are way too nice.’