EXPRESS INFORMER > News & Politics > The Blair rich project: The millions made by Tony Blair and his wife and children

Cynics might describe it as the Blair Rich Project and it has clearly achieved its aim.

Indeed when totting up the contents of the family coffers one is reminded of what two of New Labour’s principal image shapers had to say about the lack of friction between Tony Blair’s political vision and the accumulation of wealth.

His close friend and one-time guru Peter Mandelson famously boasted: ‘I am intensely relaxed about people getting filthy rich as long as they pay their taxes.’

And No 10 spin-doctor Lance Price once observed of Mr Blair: ‘He has always wanted the best for his family and there was never any doubt that he had the capacity to go on and run ‘Tony Blair’ as a business, which is effectively what he is doing.’

Never any doubt. But who could have predicted the former prime minister’s eldest son Euan would, before the age of 40, overtake his father in the matter of personal wealth creation?

And by so doing push the Blair dynasty’s cumulative fortune to well past the £100 million mark.

Little more than 20 years have passed since 16-year-old Euan Blair was found by police ‘drunk and insensible’ and vomiting in Leicester Square after celebrating the completion of his GCSE exams a little too hard.

Having initially given a false name and address, Master Blair was slung in the cells.

The episode made headlines around the world and though amusing to all — his father had been sounding off about hooligan behaviour only days earlier — it was tough on the teenager. Many of us have drunk too much as feckless teenagers.

A rite of passage.

But only Euan Blair has been taken home to Downing Street by Special Branch to face the music, and then have the humiliation of Alastair Campbell reading a prepared statement of apology.

However, Euan learned his lesson and then some, and has knuckled down ever since.

This week it was announced his education start-up Multiverse, which he co-founded in 2016 as a vehicle to aid young people find apprenticeships, had been valued at £147 million.

Which means that at just 37, Multiverse chief executive Euan Blair’s 47 per cent stake is worth almost £70 million.

Not bad for a former schoolboy drunk in the gutter. Yet his triumph is just the latest example of how, since his father left office in 2007, the Blairs have been raking it in.

And it has not always been without controversy . . .

When he stepped down in 2007 Mr Blair received a severance package from the state, then worth some £300,000.

But it would look like small change once he began to work with and for some of the wealthiest companies, countries and individuals in the world.

As an expert in leadership and the workings of democracy, it was to the developing world, where that kind of advice was needed, that Mr Blair first turned. 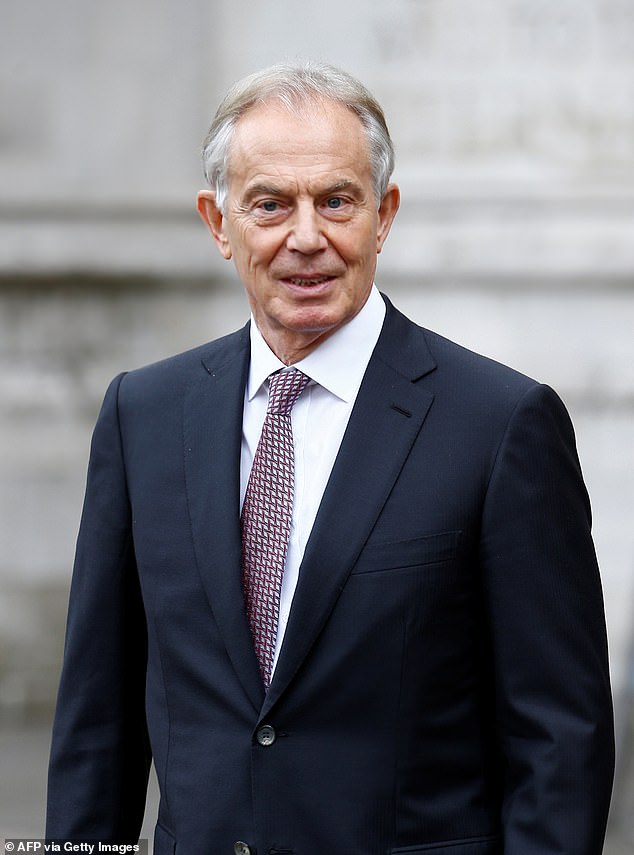 At one time Mr Blair was also the world’s highest-paid public speaker, charging up to £300,000 per engagement, with a two-year waiting list for bookings

The problem for many critics is the extent to which he has benefited personally from the coffers of some corrupt states and whether the Blair magic achieved significant changes beyond window dressing.

Millions of pounds in donations poured in to the Tony Blair Faith Foundation through which he hoped to ‘counter religious conflict and extremism in order to promote open-minded and stable societies’.

Much of which came from Middle Eastern benefactors.

Tony Blair Associates (TBA) was established in 2008 as an umbrella organisation for his global political consultancy work.

By 2010 it was reported that he was employing 130 people with a turnover and salary bill of tens of millions of pounds.

The set-up — which had a world HQ in Mayfair, London — had its detractors. In 2015, Nick Kochan a co-author of the book Blair Inc: The Man Behind The Mask wrote: ‘Off-the-shelf companies called Windrush Ventures and Firerush Ventures . . . are at the centre of the corporate spider’s web over which Blair presides.

‘Blair’s fees, and indeed all his earnings are protected by complex tax structures, nothing illegal of course, but constructed by the top accountants KPMG and are inevitably complex and opaque.’

In 2009, Mr Blair received £1 million for advising its leaders on ‘political and economic trends and governmental reform’.

Further Gulf work came Mr Blair’s way when, in 2013, his organisation acted as a go-between for the British Government and the United Arab Emirates which was threatening to pull the plug on a multi-billion-pound arms deal.

The following year Mr Blair became an adviser to the Egyptian president, Abdel Fattah el-Sisi, who had come to power in a military coup in 2013.

This arrangement was also funded by the UAE. President Sisi, it is fair to say, is no Mother Teresa.

By then questions were being asked about a conflict of interest between Mr Blair’s business dealings in the region and his role, since 2007, as Middle East peace envoy for the Quartet [countries/organisations involved in mediating the Israeli/Palestinian peace process: the UN, the EU, Russia and the U.S.].

The director of the Council for Arab-British Understanding claimed: ‘There is no clear division between Blair’s diplomatic dealings and business dealings in the Middle East.’

This was denied by Mr Blair.

He stepped down from his envoy role in 2015. The following year it was revealed that while in post Mr Blair had helped a Saudi oil firm break into the Chinese market.

In 2010, TBA had been paid £41,000 a month plus two per cent commission by PetroSaudi. Documents showed that TBA had been offered access to the Saudi king and in return invited the oil firm to have lunch with a UK government minister.

A Blair spokesman denied that the deal had anything to do with his envoy role.

Other commissions from other countries with questionable human rights or corruption records — such as an alleged £8 million a year to advise the president of Kazakhstan whose forces had just killed a number of street protesters — drew similar flak. Blair admitted there were ‘real challenges’ still but ‘progress’ had been made.

Mr Blair was on less controversial but equally lucrative ground on the global speaking and corporate advice circuit.

In January 2008, he became an adviser on international politics and climate change to Zurich Financial Services and a senior adviser at JP Morgan Chase, receiving £2.5 million and £500,000 per year respectively.

At one time he was also the world’s highest-paid public speaker, charging up to £300,000 per engagement, with a two-year waiting list for bookings.

In 2012 a Blair spokesman said: ‘These commercial interests provide important funding for his charitable work.’

Mr Blair confirmed that from then on he would retain ‘a small number of personal consultancies for my income, but 80 per cent of my time will be pro bono on the not-for-profit side.’

TBA has been replaced by the Tony Blair Institute For Global Change.

In 2014, the former Labour leader said his personal worth was less than £20 million. Others have claimed it is nearer £50 million.

The driving force behind the Blair property portfolio has always been Cherie Blair, a leading human rights barrister and part-time judge.

No doubt her own working-class upbringing in Merseyside — her father left the family when she was five — informed her attitude that London property was a gilt-edged form of investment through which she and Tony could give their children a head start in adult life. 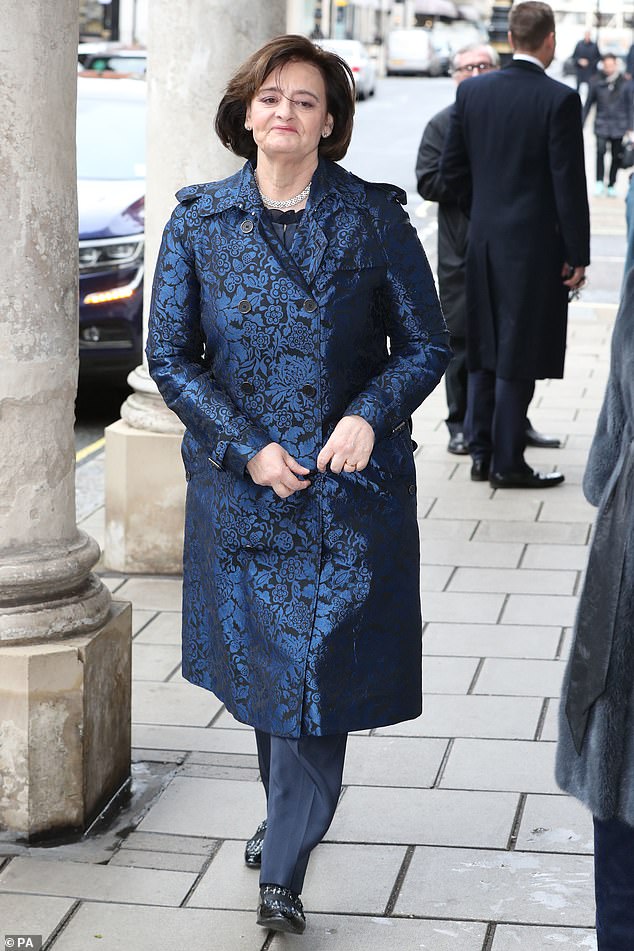 The driving force behind the Blair property portfolio has always been Cherie Blair, a leading human rights barrister and part-time judge

By then, of course, their lifestyles and fortunes had changed beyond compare.

Since 2011, Mrs Blair has led Omnia Strategy, a firm specialising ‘in bespoke dispute resolution and prevention globally’ which aims to achieves its clients’ objectives ‘no matter the size, complexity or nature of the challenge’.

The current accounts show it has assets of more than £4 million.

Her alternative career, however, as a property investor, began inauspiciously with the ‘Cheriegate’ controversy in 2002 when she bought two flats in Bristol.

She denied allegations that she had benefited from a discount negotiated by convicted conman Peter Foster, then boyfriend of her stylist Carole Caplin.

The Blairs bought the house which remains their main London home in 2004, when Mr Blair was still in office.

The five-storey Grade II Georgian townhouse in Connaught Square near Hyde Park was purchased for £3.65 million, but is now thought to be worth more than £8 million.

A mews house at the back of the main property was bought on advice from their security services for £800,000 in 2007.

The huge main mortgage was initially covered by Mrs Blair’s legal income while for other outgoings the family struggled along on her husband’s prime ministerial salary.

That would change, of course.

On Mr Blair leaving office and plunging into private sector employment they purchased South Pavilion, a Grade I-listed stately home in Buckinghamshire, for £4 million in 2008.

The actor Sir John Gielgud had been a previous owner of the property and the gardens were designed by Capability Brown.

In 2010 it was reported that the Blairs had spent £250,000 on period furniture and employed a staff of 20 at the property, which is now thought to be worth more than £10 million.

The Blair’s only daughter Kathryn is a barrister, like her parents. Now aged 31, she owns two London houses.

The first, worth some £1.4 million, was bought in 2013, reportedly under her mother’s name before the ownership was transferred to her alone.

In 2018, Kathryn paid £2.4 million for a second property in central London. She also has a property interest in Buckinghamshire. 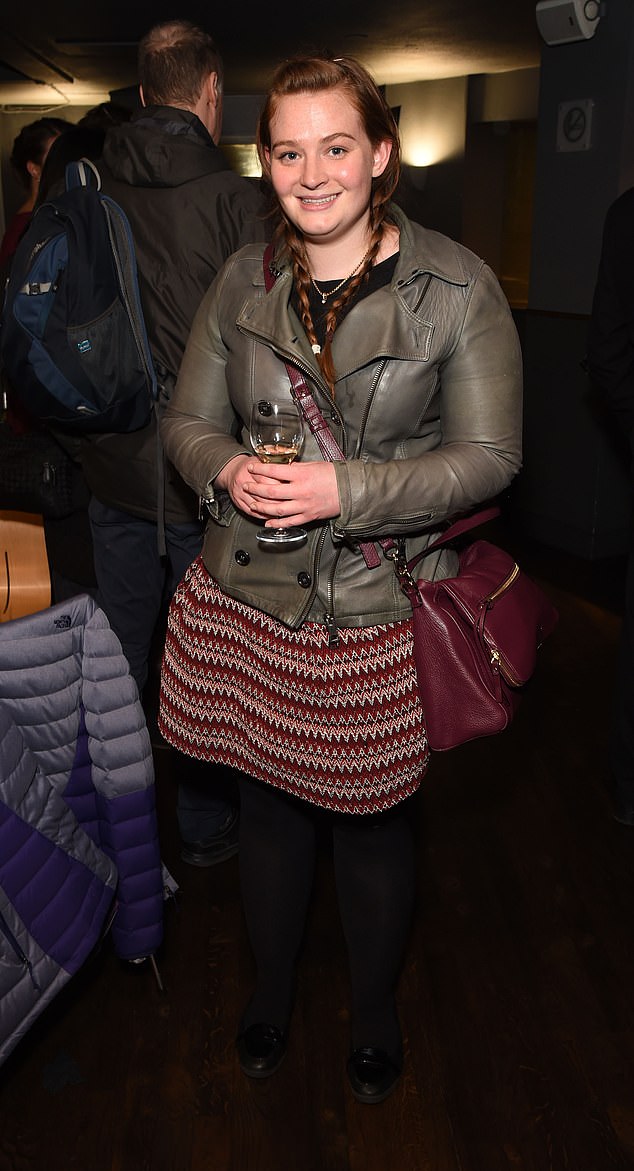 The Blair’s only daughter Kathryn is a barrister, like her parents. Now aged 31, she owns two London houses

The purchase did not require a mortgage, Land Registry records suggest. It was soon advertised for rent for £2,500 a month.

The names on the initial deed of ownership were that of Cherie and her husband’s sister Sarah.

By 2019 they had been replaced by those of Kathryn and her youngest brother, Leo, now 20.

Nicky, the Blair’s middle son, is a football agent specialising in the South American market — but working out of his mother’s offices in Central London.

And Companies House records show that Cherie is a co-director of Nicky’s Magnitude sports agency.

Mother and son have also collaborated in the property market. In 2012 Nicky and Cherie bought a Georgian townhouse in London for £1.35 million cash, sold six years later with a £400,000 profit. 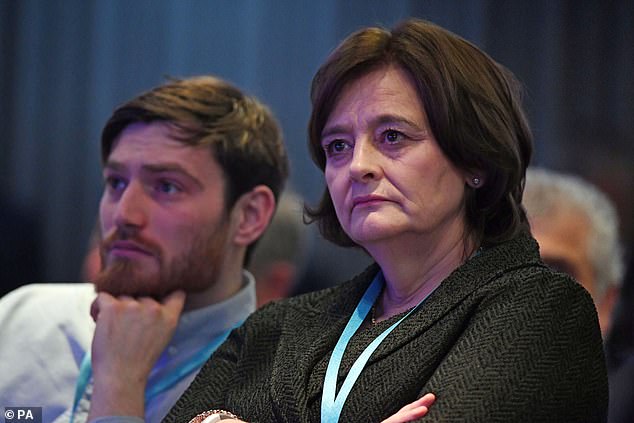 Nicky, the Blair’s middle son, is a football agent specialising in the South American market — but working out of his mother’s offices in central London 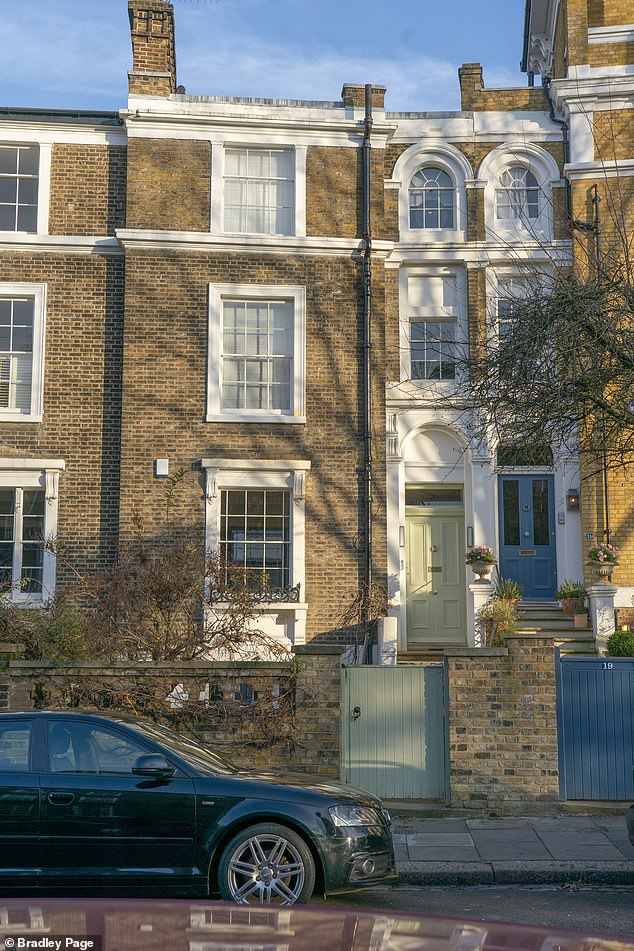 Beside his startling start-up success reported this week Euan Blair, who had worked at the investment bank Morgan Stanley, has also been busy in the property market.

Again his mother has acted as a business partner.

In 2019, Cherie was listed as joint owner with Euan of his six-bedroom family home in a fashionable area of the capital, which was bought in 2013 for £3.6 million. It backed on to one of his sister’s houses. 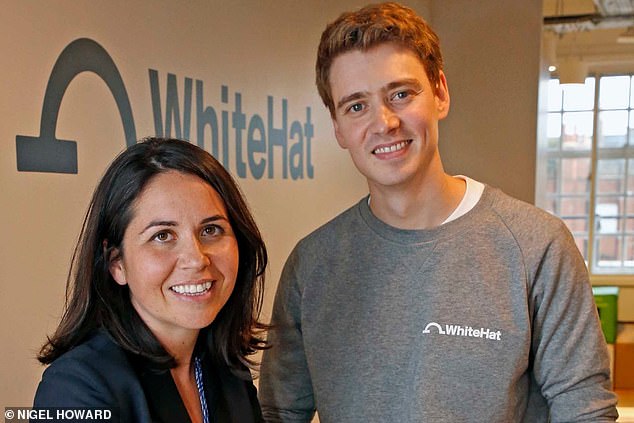 This week it was announced Euan Blair’s education start-up Multiverse, which he co-founded in 2016 as a vehicle to aid young people find apprenticeships, had been valued at £147 million. Pictured: Blair with his firm’s co-founder, Sophie Adelman 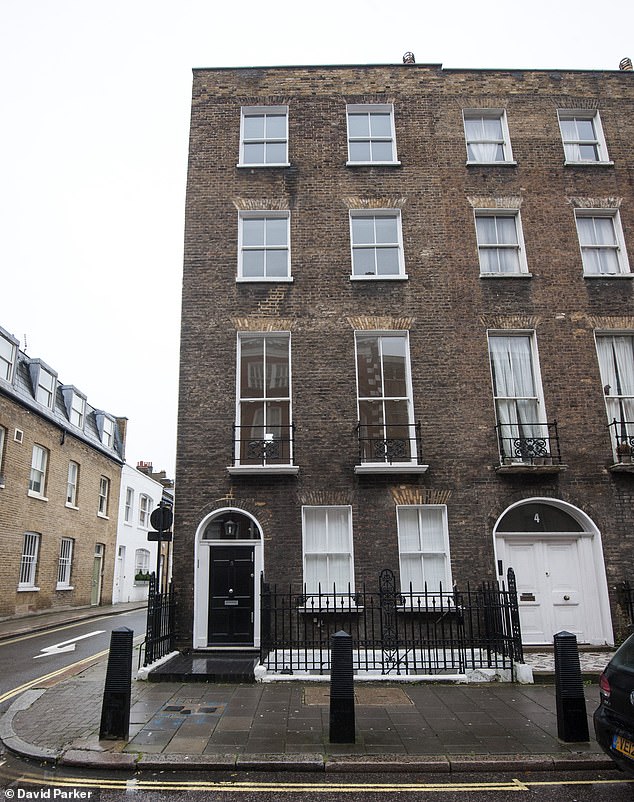 This is but a fraction of their joint bricks and mortar portfolio.

Euan and Cherie are directors and joint owners of Oldbury Residential Limited, which today — Land Registry records show — owns 31 flats and houses in Greater Manchester (ten in one street alone) bought for more than £2.4 million, to be rented out on the student market.

This investments have been highly lucrative.

In 2018 Oldbury reported cumulative profits of £400,000 over the previous two years.

Tony Blair may have made the financial running, but son Euan is likely to become the richest Blair of them all.