EXPRESS INFORMER > Travel > The best routes to travel via Eurostar

On Thursday, Eurostar will celebrate 25 years of providing high-speed rail travel between South-East England and the Continent.

The cross-Channel service has revolutionised the way many of us holiday and the range of city breaks and flight-free escapes to France, Belgium and the Netherlands has steadily grown.

In 1994, the journey from the original terminus London Waterloo to Paris Gare du Nord took three hours and there were eight trains a day. Now the City of Light is only two hours 16 minutes from London St Pancras International, with 62 trains running daily.

On Thursday (November 14), Eurostar will celebrate 25 years of providing high-speed rail travel between South-East England and the Continent

Today’s fares are cheaper, too, with the cost of a return on this route £37 less than it was a quarter-of-a-century ago. Last year, Eurostar carried 11 million passengers and you can now catch direct services to 11 destinations.

Here’s our expert pick of the best trains to jump aboard . .

A day trip to the Leeds of northern France is a good choice for a group celebration.

With the Continent an hour ahead of the UK, as soon as you arrive it feels time for a pre-lunch beer or aperitif and it’s an easy walk from Lille-Europe station to Vieux Lille, the charming historic quarter.

Just behind Grand Place, Le Barbue d’Anvers is a wood-and-brick Flemish restaurant with a three-course set menu including oysters, champagne and wine for about £54. Afterwards there’s usually time for a wander and some shopping, while the ride home is just about long enough to snooze it all off (lebarbuedanvers.fr; lilletourism.com).

Book a train to the Belgian capital and you can continue to any rail destination in the country at no extra cost — just select ‘Brussels Midi + Any Belgian Station’ when making your Eurostar reservation.

If you like Rubens, diamonds and fashion, head to Antwerp (40 minutes from Brussels), while art-lovers will want to visit Ghent (30 minutes), which stages a major exhibition devoted to Flemish painter Jan van Eyck next year.

In Brussels, petrolheads will enjoy Autoworld Brussels, which will be showing more than 50 classic British cars from December 13 (visitflanders.com). 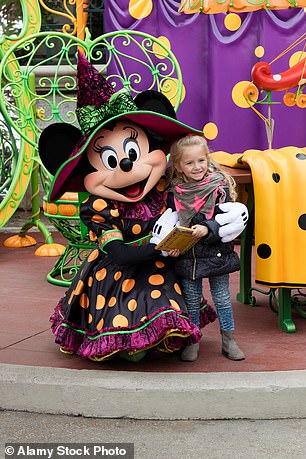 Direct services to Disneyland Paris launched in 1996 and the two theme parks here are on many a family holiday wish-list.

Eurostar trains arrive at Marne-la-Vallee station, a few minutes’ walk from the entrance, and there’s an express luggage service that can deliver bags straight to your hotel. Disney’s Enchanted Christmas, featuring festive parades and shows, opens today and continues to January 6, 2020.

For an indulgent short break devoted to romance, art and gourmet treats, you need ride no further than the French capital.

Pop over to see Degas a l’Opera, which runs at the Musee d’Orsay until January 19, 2020, and takes a close look at the scenes the artist painted at Paris’s famous theatre. Hotel Verneuil is a crisply designed four-star townhouse hotel nearby with doubles from £170.

Tip: You can buy Metro tickets in advance from the bar on the train, saving a lot of hassle on arrival (hotel-verneuil-saint-germain.com; parisinfo.com). 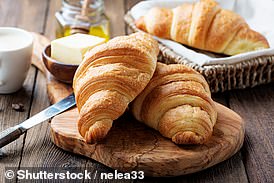 Eurostar added this popular Dutch city to its destinations last year and demand has been so high the frequency was upped to three trains a day in June.

The return leg currently requires a change in Brussels, but a direct service is planned for next year. This winter, the city’s central canals will be illuminated at night with 25 artworks for the Amsterdam Light Festival (November 29 to January 19, 2020), with boat tours available. Motel One Amsterdam-Waterlooplein is well placed for seeing this, with doubles from £110 (motel-one.com; iamsterdam.com).

This powerhouse city at the confluence of the Rhone and Saone rivers is a top destination for foodies and has 20 Michelin-starred restaurants.

Last month, it opened a grand cultural centre devoted to French cuisine, La Cite Internationale de la Gastronomie de Lyon, which has daily tasting experiences and a ‘gastro playroom’ for children. Hotel Le Royal Lyon-MGallery is an elegant base with a cooking school-restaurant. Doubles cost from £119.

Guided tours, including to nearby wine regions, can be booked through the tourist office (accorhotels.com; visiterlyon.com).

When Eurostar’s summer service direct to the South of France started in 2015, it instantly shone a spotlight on this medieval-walled World Heritage city where Catholic popes once held court.

Avignon works equally well for a cultural short break and as a gateway for exploring Provence without having to make a long road trip south.

A nine-day self-drive tour starting here costs from £1,865 per person with Expressions Holidays, including Eurostar travel, car hire and accommodation in a trio of characterful hotels with breakfast (expressionsholidays.co.uk, 01392 441 245; avignon-tourisme.com). 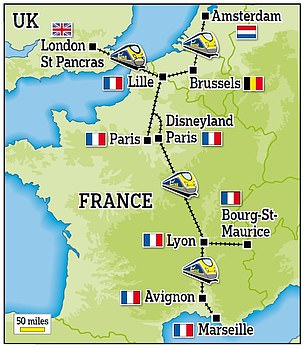 Offering a fast track to the beaches, sunshine and culinary delights of the Cote d’Azur, Eurostar’s direct service to Marseille operates between May and September with tickets now on sale.

Trains depart London at 7.19am and you’re there by 2.47pm, leaving ample time for a swim at Plages du Prado before sipping a pastis in the cafes bordering the Vieux Port. Hotel La Residence du Vieux-Port is super-central with doubles from £130 (hotel-residence-marseille.com; marseille-tourisme.com).

Eurostar’s ski train will soon be running for its 23rd consecutive season, whisking winter-sports lovers to Bourg-St-Maurice in the heart of Les Arcs where there is reliable snow and slopes to suit all levels.

Departures commence December 20 and continue to April 4, 2020, and you can take a pair of skis or snowboard as well as two bags free of charge.