Now is a great time to make sure you are getting a good broadband deal, as many providers are likely to hike rates in the next few months.

But what a ‘good deal’ looks like for you depends on what you need when it comes to your internet. If you have a tight budget, price will come before broadband speed, but for many, including regular home workers, paying slightly more for faster internet might be more of a priority.

To add another layer of complication, there are also little-known cheap broadband deals that are only open to pensioners and those on benefits.

To help pick your way through the broadband minefield, here are the current best deals broken down by price, speed and social tariff, as well as the main pitfalls to look out for.

Read our guide below and compare the top broadband deals for you with our comparison tool.

The ‘right’ broadband deal for you will vary, but make sure you don’t turn your back on cheap social tariffs that 97 per cent of those eligible forget about

An important caveat is that the cheapest deals are not available all over the country.

Much depends on your postcode and the internet network of that region. Another variable is that advertised internet speeds are averages, so you may find you get less than you think.

But with that out of the way, here are some of the cheapest deals on the market right now.

If you need fast internet, for example because you stream a lot of video, play video games online or have a big household, then speed becomes more of a factor.

Here are the top five cheapest deals for people with a need for (broadband) speed.

A social tariff is a cheap broadband deal only available to struggling households. These cheap deals exist because since 2020 industry regulator Ofcom has demanded that providers give low-cost options to the most hard-up customers.

Most of these deals require that you are on benefits to qualify.

It is well worth checking if you do qualify, as Ofcom says only 3 per cent of eligible households have a cheaper social tariff. Last September Ofcom said: ‘That leaves 97 per cent missing out on average annual savings of around £144 per year.’

Another perk of social tariffs is there are no exit fees for leaving them before your term ends.

To qualify for the EE Basics deal costing £12 per month, you need to be getting Universal Credit, the guarantee element of Pension Credit, Employment and Support Allowance (ESA), Jobseeker’s Allowance or Income Support.

After 12 months EE will check that you are still getting qualifying benefits before letting you renew the deal.

For the Vodafone deal, you will need to be on Jobseeker’s Allowance, Universal Credit, Pension Credit, ESA, Income Support, Reduced Earnings Allowance, Personal Independence Payment (PIP) or Disability Allowance. After 12 months the price goes up to £22 a month.

The Virgin Media Essential Broadband tariff is only available to people on Universal Credit. It is renewed monthly.

It is also available to people in care homes and those who have left care, if they are referred by social services.

Finally, the Lightning Fibre deal is open if you or someone in your household claims Universal Credit, Jobseekers’ Allowance, ESA, Income Support, PIP, Attendance Allowance or Care Leavers’ Support.

When do broadband prices go up ?

How this normally works is internet firms take RPI or CPI, add on 3-4 per cent and hike their rates by that figure.

The Office for Budget Responsibility has already said CPI could be 10 per cent, while RPI could be 14 per cent – meaning broadband price hikes in the region of 14 to 18 per cent.

Sneaky broadband tricks to look out for

There are a few pitfalls to look out for when looking for a new broadband deal.

Firstly, make sure to look beyond the advertised monthly price. Broadband providers know that consumers and price comparison websites rank internet deals based on monthly cost.

This has led to a wave of introductory offers and set-up fees which muddy the waters when trying to work out what a deal really costs.

For example, some deals advertise a low rate, but this only applies to the first few months. After that point a higher rate kicks in for the rest of the deal.

Another thing to look out for is set-up fees. As the name suggests, these are one-off costs paid at the beginning of a new broadband deal, and are normally around £10.

There may be an exit fee to pay if you leave your existing provider before the fixed-term contract is up. 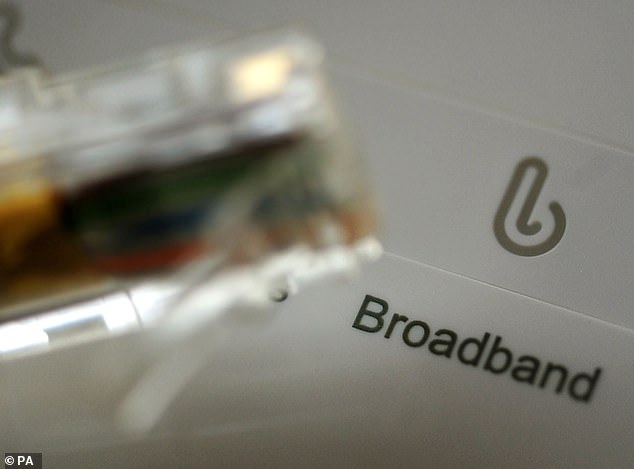 Don’t get tripped up by broadband provider small print, as this can end up costing you a serious wedge

It is also worth reading the small print of your deal, as providers can hike prices mid-way through.

Most broadband deals last for 12, 18 or 24 months, but many providers reserve the right to increase prices before your contract ends, often every April.

But make sure you know your rights. Ofcom rules say if your provider increases prices mid-contract you have 30 days to cancel without an exit fee

Luckily, thanks to Ofcom rules, once you’ve been notified of a price change, you’ll have 30 days to cancel your existing contract without paying any exit fees.

The 30 day period runs from when your broadband firm tells you of its price hike plans.

Remember to haggle – and be ready to switch

One thing to remember is these tariffs are not set in stone and they are often more like guideline prices.

Research from consumer champions Which? last week found that customers who haggled over broadband prices saved £43 a year.

Which? head of home products and services Natalie Hitchins said:’ Given the unrelenting cost of living crisis, Which? is calling for all providers to allow all customers to exit their contracts penalty free if their tariff does go up mid-contract and that anyone eligible for a social tariff should be allowed to move to one without facing exit fees.’