Alan Smith climbs out of his chair and heads towards the bookshelf. He returns holding the Official History of Arsenal and dips into a crucial chapter of the club’s recent past.

‘That ’91 season seems to be forgotten,’ says defender Nigel Winterburn. ‘No one ever really mentions it, which is very weird.’

This week a documentary detailing another slice of Arsenal folklore hits the big screen. Arsene Wenger: Invincible orbits around the 2003-04 campaign, when Arsenal went the whole league season unbeaten, a feat unmatched since, and one that narrowly eluded the club 13 years earlier.

In 1990-91, under George Graham, Arsenal ended with a First Division report card that read: 38 matches, two points docked, one league title, one 21-man brawl, one captain behind bars… and just one defeat.

‘We could have been the Invincibles,’ Smith reflects. Instead, only memories remain for that bunch, who relished a scrap and enjoyed a drink.

Those nights out helped propel Arsenal towards a second title in three years. The bottle also left Tony Adams at Her Majesty’s pleasure. By the end, Arsenal had been battered, boozed and still emerged victorious.

Graham had learned his lesson from their 1989 triumph, when Arsenal failed to strengthen and soon surrendered their crown.

In 1990, he signed David Seaman, Andy Linighan and Anders Limpar, who arrived from Italy with quick feet, shaved legs and size-six boots. ‘They were a blur,’ says Smith, who roomed with Limpar. ‘One time, I shaved everything,’ the Swede recalls. ‘Alan couldn’t believe it!’

But Limpar’s first encounter with Graham’s squad had been rather more forgettable. ‘We were on pre-season in Gothenburg,’ he says. ‘The players were sitting there, they didn’t have a f****** clue who I was.’ 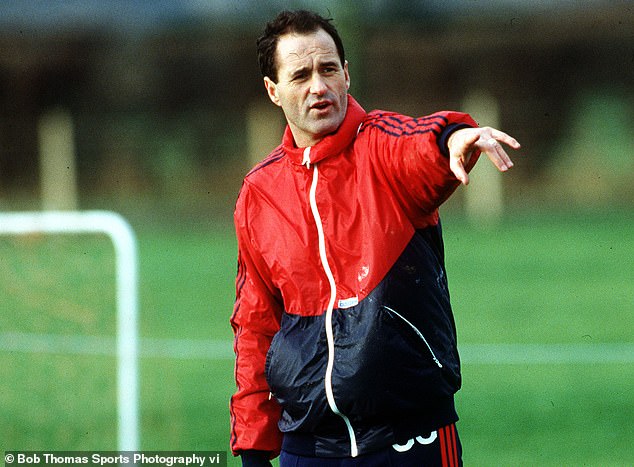 They soon learned. ‘We were a very good team and he turned us into a great team,’ recalls midfielder Perry Groves, who was jostling with Limpar for a spot on the left flank. ‘He played a one-two and bent it with the outside of his left foot into the opposite top corner. I thought, ‘That’s me on the bench for the season’. I was Anders’ stuntman, really.’

Limpar was one of the few foreign imports in the old First Division. Fortunately his team-mates helped soothe the culture shock — three invited him over for dinner during his first week.

As for Graham? ‘I was vulnerable, insecure… and he just f****** slagged me off like you wouldn’t believe,’ Limpar says. The Swede regrets suggesting life at Arsenal was like ‘playing under a dictator’; he insists he was misquoted when he compared Graham to Saddam Hussein. His more considered verdict 30 years on?

‘So cruel. He f***** me up.’ Limpar’s distaste for defensive work did not sit well with a drill sergeant whose sides were built on discipline and organisation. ‘We trained hard and had a system to play from. But every half-time we never spoke about what we should do,’ Limpar insists. ‘He just slagged us off and then the referee blew his whistle.’ 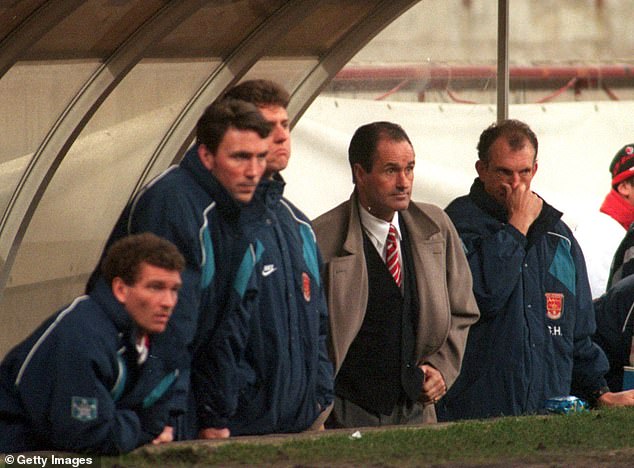 No one, not even Michael Thomas — the hero of the dramatic ’89 title win — escaped the manager’s wrath. ‘George tried to make him do press-ups,’ Winterburn recalls. ‘Mickey wouldn’t do them so he was just lying on the floor in a press-up position and George was sitting on him.’

Adams’ weekly meetings with the manager were about the only chance for players to have their say. ‘Tony would go in about why the lads weren’t happy,’ Winterburn jokes. ‘And come out with a new five-year deal!’

Graham’s players developed a ferocious team spirit. The Tuesday Club was the most notorious of their, er, team-bonding exercises; other nights the squad would gather after training and head to TGI Fridays.

‘Everybody went but then it wasn’t really frowned upon when people started to disperse,’ Winterburn says. ‘You had players staying out until 5am, 6am but some left pretty early.’ 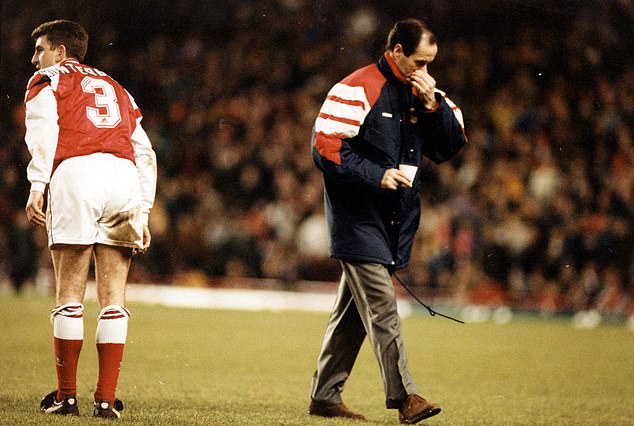 Graham knew those nights out could be a vital tool. ‘He’d turn a blind eye to some indiscretions,’ Smith says. ‘He liked that the lads were socialising and close-knit because that would carry through on to the pitch.’ Never more so than at Old Trafford in October 1990.

Arsenal had begun the season well — winning five and drawing three of their eight league games — when a simmering rivalry with Manchester United boiled over. Limpar put Arsenal in front before Denis Irwin flew into the winger with a reckless tackle. Winterburn responded in kind. Cue chaos.

‘I’m a pussycat,’ the defender jokes. ‘I light the touch paper and try to get to the back — I couldn’t get away quick enough!’

Irwin and Brian McClair booted the defender as he lay on the floor. ‘McClair kicked him in the back, like a f****** thug,’ Limpar recalls. ‘I didn’t know what to do, I’m not a fighter. I just walloped McClair.’ 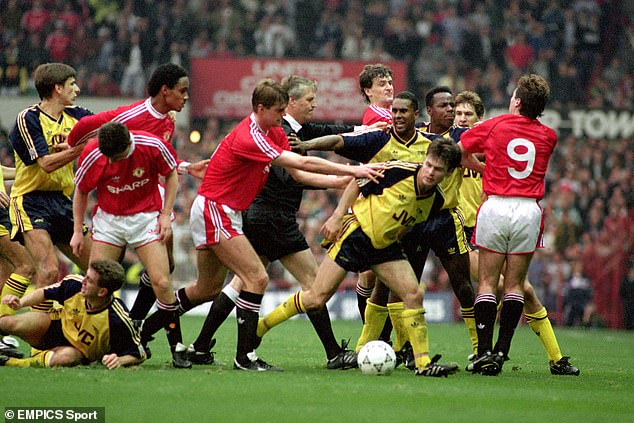 Soon Seaman was the only player not involved. ‘Handbags,’ says Winterburn. ‘Every time I see it, I laugh.’ Even Sir Alex Ferguson and the two benches spilled on to the pitch.

‘It was always going to happen with two mad Scotsmen on the side,’ adds Graham, who had often warned his side: ‘They think we’re southern softies… we’re not going to let them out-fight us.’

He even gave them a battle plan: ‘If anything happens, get around your team-mate because the referee is going to find it hard to book or send off all of you,’ Winterburn recalls. It worked — the fracas ended with only yellow cards for Limpar and Winterburn and Arsenal held on for victory.

Limpar, Winterburn, Paul Davis, David Rocastle and Graham were fined by the club but behind closed doors the verdict was rather different. ‘The gaffer loved it,’ Groves says. ‘He came into the dressing room afterwards and said, ‘Magnificent chaps, but I’m going to have to slaughter you in the papers’.’ 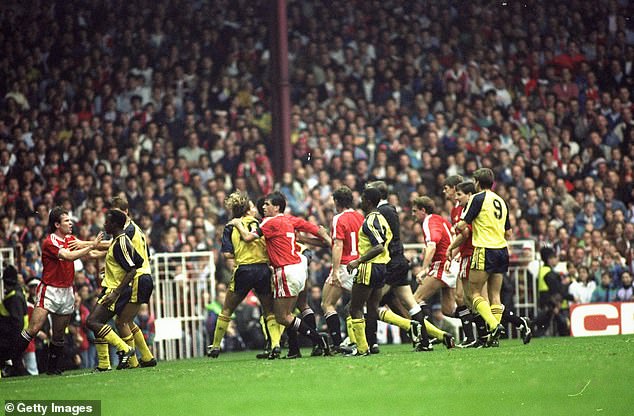 United were deducted a point by the FA. Arsenal, who had a similar scrap with Norwich the previous year, were docked two.

Again, though, Graham used this to his advantage. ‘He spoke to the whole squad,’ Davis remembers. ‘He said, ‘They’re all against us, everybody hates us’. Looking back that was pivotal — the way he handled that, the things he said.’

Another eight games brought another five wins — including over rivals Liverpool. Then, on December 19, as his team-mates prepared for that evening’s Christmas party, Adams travelled to Southend Crown Court.

The Arsenal captain faced trial for drink-driving. Seven months earlier, his preparations for a tour of Singapore careered off course. A day drinking session ended with a botched dash to the airport. 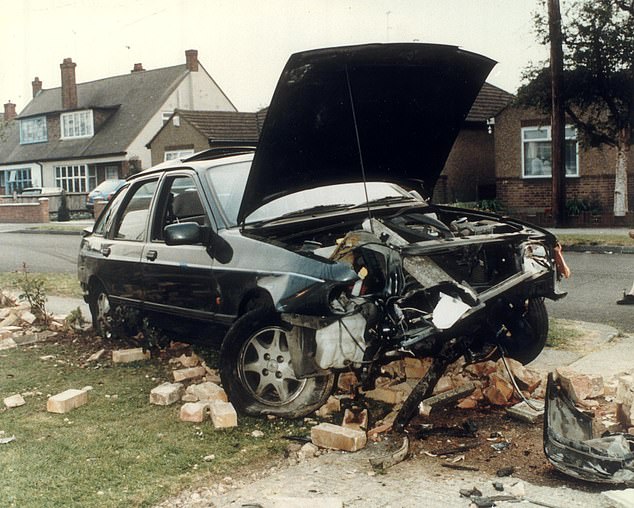 ‘I barely got 60 yards,’ Adams later wrote. Driving at nearly 80mph on a residential road, he lost control and crashed into someone’s garden wall. He clambered out of the wreckage, it is said, only to be offered tea by the elderly residents. A breathalyser test showed he was nearly four times over the legal limit.

Adams made the flight and explained why he was late. ‘We all said, ‘Stop bull*****ing again’,’ Winterburn says. ‘Then he put his head down — he had glass all stuck in the top of his head!’

Come the trial, no one foresaw his four-month sentence in Chelmsford Prison. Some appetizer for the festive celebrations.

‘We met at Highbury and I came up the marble steps with Paul Merson,’ Groves recalls. ‘We saw two girls from the office in tears saying, ‘They put him in prison’.

‘We didn’t believe it. We went inside the dressing room and it was like someone died.’ 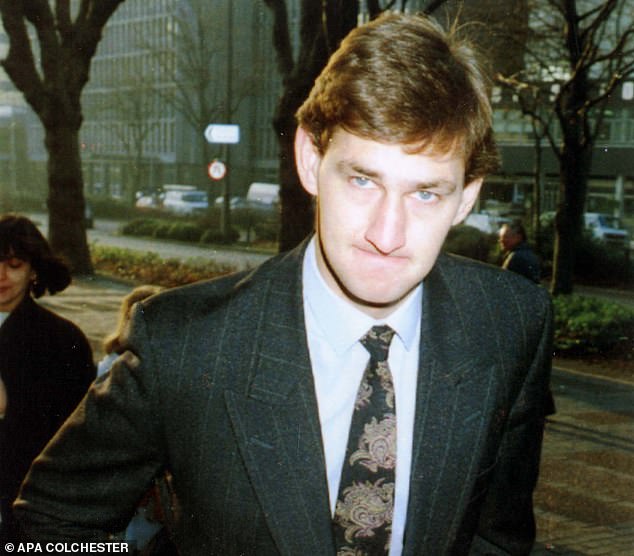 But the team’s verdict? ‘He would’ve wanted us to go out for a drink, wouldn’t he?’ Groves says. ‘We’d heard he was spending the night in custody in Pentonville. We went there for a drink and toasted Tony from outside the prison, even though we weren’t sure he was in there.’

Adams would serve only 58 days but concerns swelled. ‘There was a lot of talk in the directors’ lounge about how we would handle it without Tony,’ Graham says. ‘But we were on a roll.’

Davis was made captain and he remembers: ‘We were encouraged to write Tony letters.’ One from Groves carried a cheeky request: ‘Can I have your two match tickets until you’re back?’

Though Arsenal had lost their leader, Adams’ father Alex regularly took his place in the dressing room. ‘That wasn’t really allowed but George would let him,’ Smith recalls. ‘It was a bit awkward, but we’d say, ‘Hello Mr Adams, how are you? Give our regards to Tony’.’ 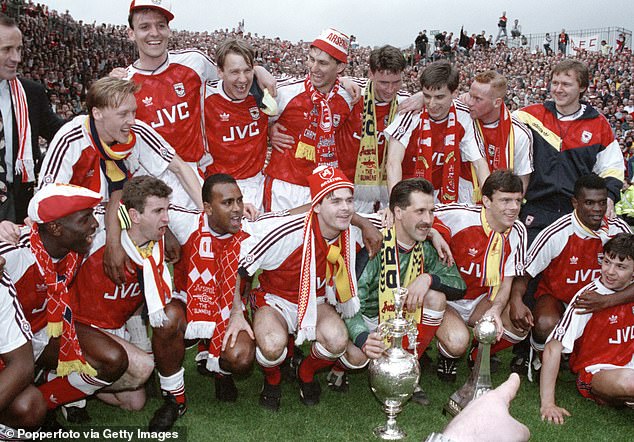 Nine games into Adams’ sentence, Arsenal were still unbeaten and daring to dream of the impossible.

‘When you’ve gone that far, you do start to turn your mind to it,’ Smith admits. Then, in February, they visited Stamford Bridge — without Adams, without David O’Leary and without Steve Bould. On a blustery day and a ‘ropey old pitch’, Arsenal lost 2-1.

‘If Tony had been there, things would have been different and we’d have been the Invincibles that year,’ Smith reckons.

Afterwards, Graham changed tack. Instead of his typical rollicking, he congratulated his players and challenged them to build another unbeaten run. They obliged and by their penultimate game — the return visit of United — Arsenal were treated to a guard of honour, rather than a scrap, after Liverpool’s defeat by Nottingham Forest earlier in the day secured the title. 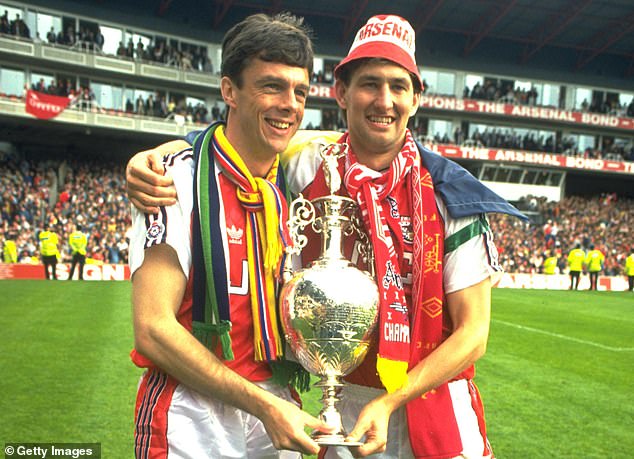 ‘It was incredible because at Highbury, from the changing room you could open the windows on to the road and all the crowd were outside,’ Winterburn says. ‘When we went out for the warm-up, we all had hats and scarves on. It was like a party.’

Highbury sang ‘you can stick your two points up your a***’ as a hat-trick from Smith earned a 3-1 win — and propelled the striker to a second Golden Boot.

‘We never got the credit we deserved,’ says Graham, whose side amassed 74 goals and shipped just 18. ‘We were like a machine.’

No wonder, given how Graham drilled his back four: often without a ball or opposition. ‘Twice a week, for 100 years. Until we all submitted,’ Winterburn jokes.

Worth it, though, for a sliver of history. And a nagging sense of what could have been.