Ferrari today launched its first pandemic prancing horse as it took the wraps off its first new 200mph sports car since the coronavirus forced the temporary eight-week shutdown of its legendary factory.

The Portofino M is the iconic Italian brand’s new wind-in the hair grand tourer with a signature retractable hard top roof and a £175,000 asking price.

Dubbed an everyday supercar, it is essentially two cars in one: a beautifully streamlined sporting berlinetta coupe and a rakishly gorgeous convertible drop-top spider, combining the thrill of the sporting chase with the romance of the open road.

Ferrari’s first pandemic launch: This is the new Portofino M, which is the legendary Italian car maker’s new ‘everyday supercar’

It is named after the exclusive, glamorous and elegantly upmarket seaside resort of Portofino on the Italian Riviera. Order books are open now with first deliveries early in the New Year.

The Portofino’s additional letter ‘M’ stands for Modificata, which Ferrari explains ‘refers to cars that have undergone an evolution that has boosted their performance’.

Or in more prosaic parlance, it’s a refreshed, upgraded and face-lifted version of its older sibling with more efficient and cleaner engines.

As well as a sportier visual makeover, the new Portofino M includes an upgraded 620 horsepower 3.9-litre V8 turbo motor (up 20 horsepower on its predecessor), a new 5-position Manettino drive-mode selector now with Race mode added to boost performance, and a new 8-speed F1 dual-clutch gearbox (up from seven previously).

That will propel it to a top speed in excess of 200mph with acceleration from rest to 62mph in just 3.45 seconds (0.05 seconds faster than its predecessor at launch) and up to 124mph in 9.8 seconds (one second faster).

It promises ‘instantaneous throttle response throughout the rev range’ and ‘zero turbo lag’.

But Ferrari says customers typically spend a further 15 per cent on those little must-have extras, pushing the final batting average to nearer £200,000.

‘Significantly, the Portofino M is the first Ferrari to be presented in the wake of the company’s temporary closure due to the Covid-19 crisis, making it the symbol of a voyage of rediscovery. It is the (re)starting point for Prancing Horse’s pursuit of innovation.’

Of the new car it said: ‘The Portofino M bursts with innovations that boost its extreme versatility and the pleasure of open air driving.

‘There is no shortage of technical innovation in this stunning new evolution of the Ferrari Portofino, the most notable being its redesigned powertrain, a brand-new eight-speed gearbox and a five-position Manettino that includes a Race mode, an absolute first for a Maranello GT spider.

‘As a consequence of these and many other new features, the Portofino M guarantees a completely unprecedented combination of authentic GT performance, driving pleasure, agility and exceptional versatility in everyday driving’. 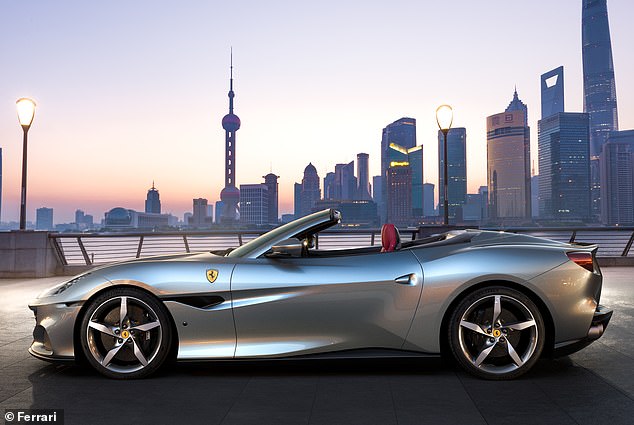 It is essentially two cars in one: a beautifully streamlined sporting berlinetta coupe and a rakishly gorgeous convertible drop-top spider combining practicality and sports car looks with the romance of the open road 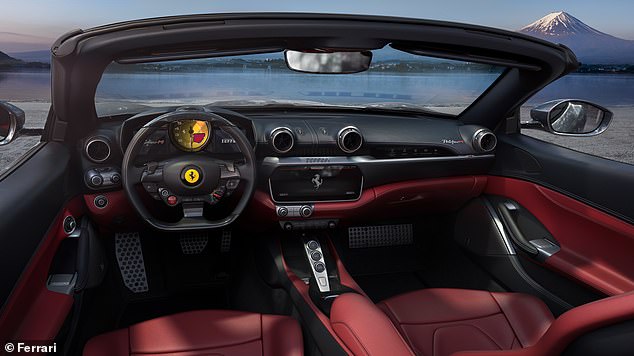 Inside, drivers will get a squared-off sports steering wheel, a yellow-backed digital dial and wide-screen infotainment display

Braking has been improved, too – with a 10 per cent reduction in pedal travel – to make it more precise and responsive.

While there are four exhausts, two of these silencers are fakes. Ferrari says they have been ‘eliminated’ to improve the ‘soundtrack’ of the car.

The car’s exterior styling has also been given a face-lift to underscore its more dynamic performance, with a newly designed aggressive front bumper and a reworked rear diffuser that’s now separate from the bumper, allowing customers to specify a carbon fibre version. 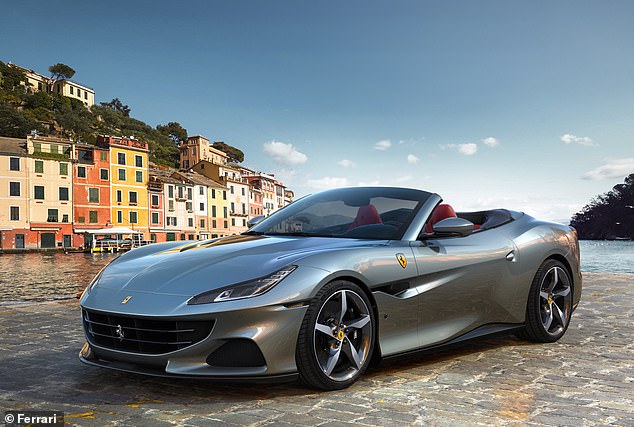 The Portofino M is named after the exclusive, glamorous and elegantly upmarket seaside resort on the Italian Riviera

As a traditional 2-plus-2 GT, there are two roomy high-backed seats up front for driver and passenger – plus space at a squeeze in the back for two more passengers or young family members in the bucket seats for short distances. There are Isofix fittings for child-seats.

Fuel consumption: TBC (but an improvement)

CO2 emissions: TBC (but an improvement)

The sports car firm says: ‘Both inside and out, there is a sense of harmony of expression and intent in forms that are sometimes sharper and then softer and more flowing.’

‘Sportier in character than its predecessor, it also delivers superior handling whilst not only maintaining but enhancing on-board comfort.’

Although no official fuel economy and CO2 emissions figures for the Portofino M have yet been released, the previous model averaged 26,4mpg and 245g/km CO2 emissions.

But the new car gains a gasoline particulate filter so that it can ‘comply with the strictest pollution emissions standards.’

Improvements in transmission efficiency with the 8-speed transmission also means ‘a significant reduction in fuel consumption in urban and motorway contexts’ as well as sportier performance.

Ferrari’s Maranello factory was shut down for eight weeks during March and April, re-starting production from May 4 after staff were given a week of in-house training on manufacturing cars under Covid-compliant safety measures.

The original Portofino was the replacement for the California T which in turn followed the original Ferrari California which was sold from 2008 to 2014.

During a live global online press conference, Ferrari’s chief commercial and marketing officer Enrico Galliera told This is Money that despite having to cancel all live-event launches following the start of the Covid-19 pandemic, the firm was still on track as planned to unveil 15 new cars by 2022.

The safety of staff and customers was paramount but the firm had adapted to cope, he said.

Seven of the 15 planned launches, including today’s Portofino M, have now already happened, an eighth is planned before the end of this year, with seven more to follow over the remaining two years.

‘Every single event in the world – involving crowds – has been cancelled,’ said Mr Galliera.

‘But we are moving to a more one to one approach with our clients. We are keeping in contact with them.

‘There are a lot of limitiations on our freedoms caused by Covid. Thankfully one of the things we are still allowed to do is to drive a car – and hopefully a Ferrari.’