An excited dog left a trail of destruction in her owner’s front yard after being left to her own devices.

Pooch Winnie ripped up a wooden porch post and collapsed a small fence after racing off while still tethered to the house.

The footage was recorded at her owner’s home in Richmond, Indiana.

In the clip from a doorstep security camera, Winnie was tied to a porch support while he owners did some chores outside.

But the excitable one-year-old, who has a ‘tendency’ to chase after other animals, would sit still for long and was soon running across the yard.

The thin white post she is tethered to proves no match for her strength and is seen flying across yard after giving it a swift yank.

One-year-old dog Winnie ripped up a wooden porch post and collapsed a small fence after racing off while still tethered to her owner’s home in Richmond, Indiana

On a closer look in the video it’s not only the porch post that the dog destroys, but also a small fence.

Seconds later her owner appears, looking disappointed at the prospect of having to fix the porch.

‘We were doing some work outside on a nice day and I suggested we tie our dog to the porch support,’ her owners said. 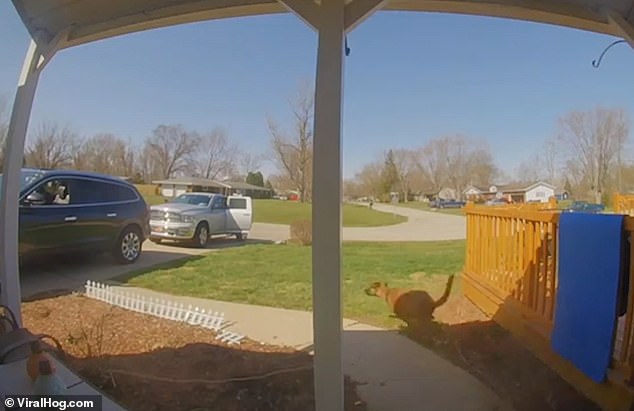 ‘She’s only a year old and we fostered her just a year ago and ended up keeping her.

‘We have only lived here a year, it’s our very first home, and we didn’t even think to check if the posts were weight-bearing.

‘I went inside while my husband continued to work outside. Winnie has a tendency to run quickly after birds and leaves, and she took off and took the porch support with her.

‘After rewatching the video I realized she left a path of destruction by taking out the fence too.’