Anthony Albanese SNAPS as he’s grilled over when he will get Australia to vote on becoming a republic: ‘Not sure why I’m being asked’

Prime Minister Anthony Albanese has erupted at a journalist who asked him about the timing of a referendum for Australia to become a republic.

Mr Albanese was grilled on Monday over his long-standing plan to hold a vote on the Voice to Parliament in his first term in office.

A reporter asked the PM if he would still push ahead with a republic vote if his Voice vote failed.

‘You previously said you couldn’t envisage a change to a republic without constitutional recognition to First Nations people,’ the journalist said.

‘Could I clarify, is that a commitment to put constitutional recognition to a vote first?

‘Or are you saying, unless and until that is achieved, you wouldn’t even try a republic referendum?’

Mr Albanese responded to the question by scowling and telling the journalist the answer was ‘pretty clear’.

‘I can’t have been clearer before the election, on election night, since the election that my priority for this term is the recognition of Aboriginal and Torres Strait Islander peoples in our constitution with a constitutionally recognised Voice to Parliament,’ he said.

‘I actually begin every speech with that as part of my acknowledgement of country. 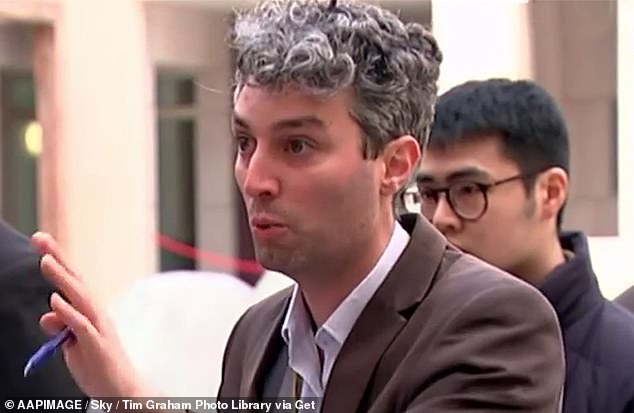 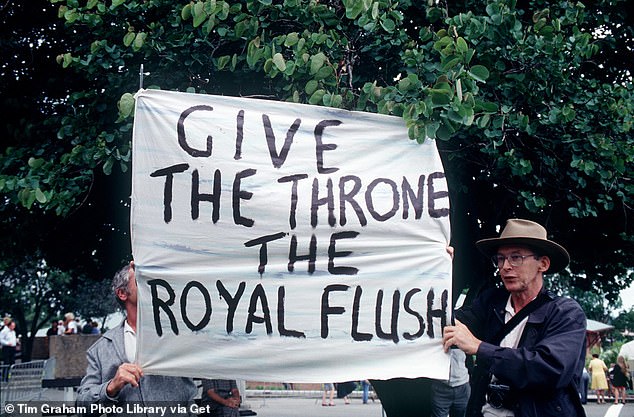 Queen Elizabeth II’s death has reignited debate for Australia to become independent of British rule (pictured, Sydney protesters advocating for a republic in 1994)

‘I can’t be clearer about it, I’m not quite sure why I’m being asked about it.’

The journalist fired back, saying: ‘It slows it down – the republic will have to wait. that’s the point.’

Mr Albanese laughed and responded: ‘Now you’re getting into hypotheticals over hypotheticals when I have made it very clear that I will not be commenting on those issues at this point in time.

‘I’ve made it clear that my position on our constitutional arrangements have not changed, the Australian Labor Party’s position is clear. ‘This is a time where Australians expect their prime minister to act in accordance with the constitutional arrangements which are there, in place, now.’

Australia is a constitutional monarchy and King Charles III has been proclaimed the nation’s head of state.

A referendum on Australia becoming a republic failed in 1999 after controversy over the exact model that would replace the current system.

WHAT IS THE INDIGENOUS VOICE TO PARLIAMENT?

Prime Minister Anthony Albanese has proposed an advisory group made of Indigenous community leaders called the Indigenous Voice to Parliament.

The Voice can inform Parliament how its actions will affect Aboriginal and Torres Strait Islander peoples but will not have legislative powers.

Mr Albanese is currently seeking to hold a referendum to enshrine the rights of the advisory group in the constitution as part of Australia’s commitment to fulfill the Uluru Statement to Heart.