Tesla’s Model 3 electric car has toppled the Toyota Camry to become Australia’s highest-selling sedan, but one owner of the vehicle is not impressed and says he wants to move back to petrol.

It’s a significant blow for Toyota after Elon Musk’s marque knocked the Camry off the top spot after a 28-year reign as Australia’s highest-selling sedan.

Tesla’s total sales of 19,584 vehicles amounted to nearly two-thirds of all electric cars sold across Australia.

In total, 33,410 new fully battery electric vehicles were sold in Australia in 2022, amounting to 3.1 per cent of new car sales.

‘This year is shaping up as one of the most significant in recent history, particularly in terms of the development of policies that set the direction for the future decarbonisation of the light vehicle fleet.’

The Tesla Model 3 has become Australia’s most popular sedan outselling the veteran Toyota Camry in 2022, with 10,877 Model 3s sold 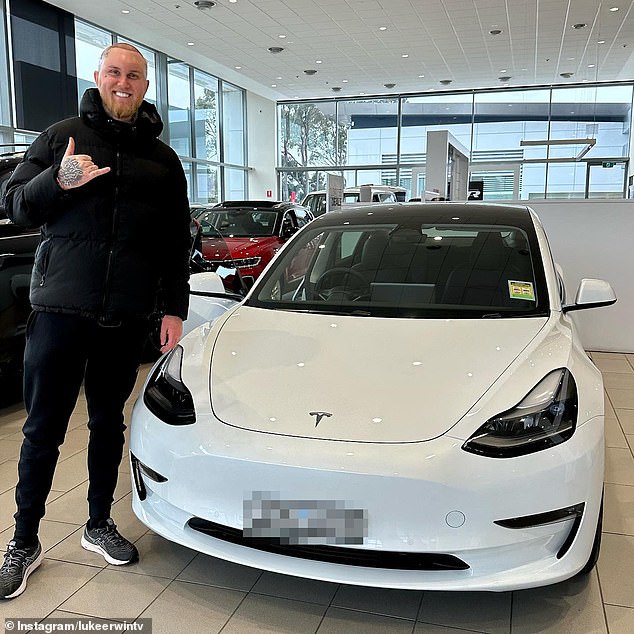 Yet Aussie Tik Toker Luke Erwin (pictured) is not sold on the car, detailing all of his qualms with the popular vehicle

But after buying a Tesla Model 3 performance in October last year, controversial YouTube star Luke Erwin wants to return to a petrol vehicle.

In a series of video reviews, Mr Erwin highlighted what frustrated him about the vehicle.

He pointed out that the inside of the vehicle was ‘boiling hot’ because the sun shone directly into the car through the glass roof.

Mr Erwin’s ‘biggest disappointment’ was the availability and cost of Tesla’s network of charging stations, known as Superchargers.

‘I thought all the Supercharges were free until I got the car and found out the Tesla Superchargers actually charge like crazy,’ he said.

He says a full charge on his vehicle gets him 445km.

‘Lets just say if I drive from Sydney to Campbelltown, then to Wollongong, and then back, the car is going to be dead.

‘On your way back, you’re stressing like crazy, and you have to find a Tesla Supercharger.

‘That is going to cost you $40, so losing that time, stressing and losing $40, I’d rather own a petrol car again.

For example, on a recent trip to the Gold Coast Mr Erwin was forced to stop to charge the vehicle four times to recharge on the 845km journey.

Many of his followers said they were able to complete that same trip on a single tank of fuel.

‘I have done same trip recently with one full tank of petrol with four passengers, plus suitcases and air conditioning running all the way,’ one said.

‘If you lose your card, you ain’t getting into your car. Let’s just say my phone’s dead, I lose the card or misplace the card, I’m locked out of the car.’

He said another problem with the vehicle was that no one knows how to open the door from the inside.

However, Mr Erwin praised some features of the car, including its touchscreen showing the area surrounding the vehicle, a ‘massive’ console, and a convenient wireless charging pad for mobile phones. 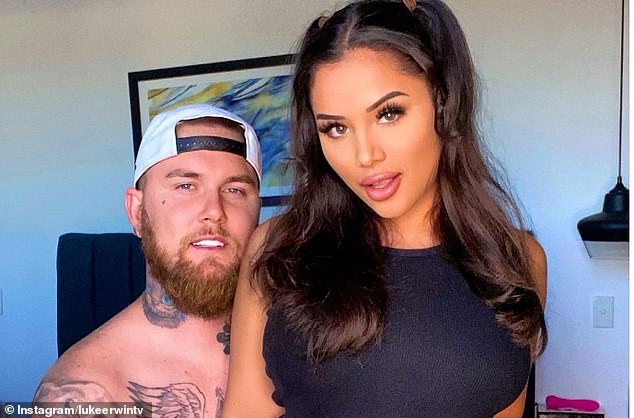 Excess charging cost, wait times and added stress has led to Mr Erwin and many other Tesla owners considering switching back to petrol cars (pictured, Erwin with his girlfriend Maddison) 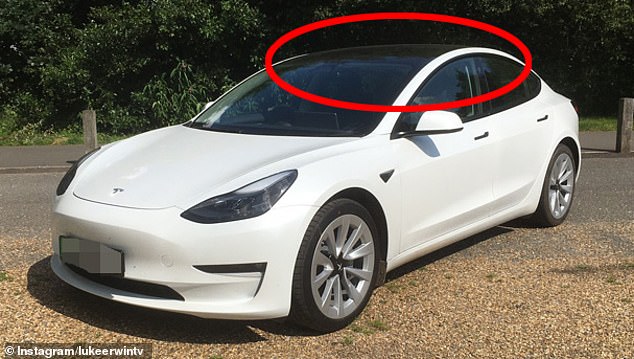 It comes amid revelations Australian Tesla drivers were forced to wait in 90-minute queues at charging stations over the Christmas holiday period.

Queues for charging stations have been spotted nationwide, including in Victoria and NSW.

Images of long lines of the electric cars were photographed at Wodonga on the Victoria and New South Wales border, and at a Coffs Harbour charging point in northern NSW.

Angry Australians took to social media to vent their frustrations, with one declaring ‘why anyone would want an electric car that can take up to an hour to fully recharge is beyond me’. 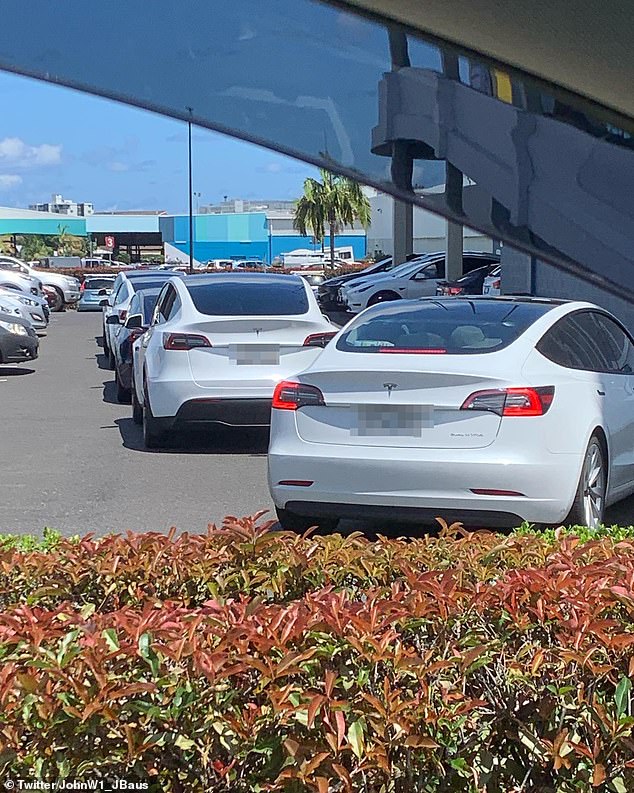 Similar scenes were seen in Coffs Harbour, in northern NSW, on Wednesday with a queue of Teslas stretching through the carpark as drivers wait their turn to power up 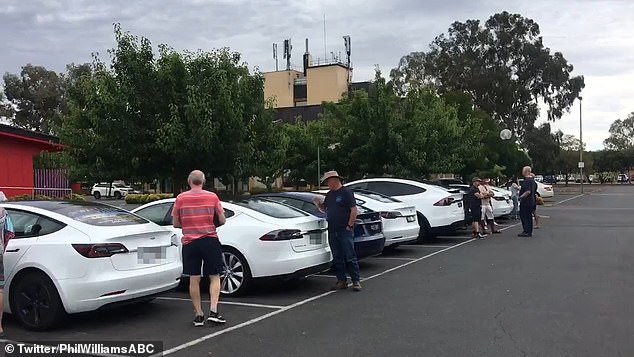 ABC reporter Phil Williams shared a video of Tesla owners lined up with their vehicles at a charging bay in Wodonga, on the border of Victoria and NSW, to Twitter on December 28

‘I’m an expat Australian and this is the reason I left. We’re 10 years behind the rest of the world with EV and innovation,’ another said.

‘At least with gas engines you can fill up and be on your way in less than five minutes. The convenience factor is kinda obvious here,’ fifth person said.

‘This right here is the one of main reason why I won’t be on the EV bandwagon any time soon.’

Others called for an expansion of the charging network across Australia to solve the problem of long wait times.

‘There are eleven petrol stations in Wodonga, multiple outlets for every major brand, and only one place to charge EVs which is just outside the council offices.’

Another suggested: ‘Every petrol station should have to fit charging points.’

Others suggested the long wait times were due to the Christmas holidays, while some said it was likely the scenes in Wodonga were from a Tesla club meet-up.

WHO IS LUKE ERWIN?

Luke Erwin is a TikTok star who has courted controversy with his videos since switching from social media pranks to giving away cash on camera in footage which has been branded ‘exploitative’ and ‘degrading’ by some.

In August, Erwin – who previously dated Bernard Tomic’s OnlyFans ex, Vanessa Sierra – was slammed for raining $5 notes over the head of a homeless man in Australia.

‘Here we go, let’s go, baby,’ he laughed as $100 worth of $5 notes fluttered to the ground and the man quickly tried to gather them up. 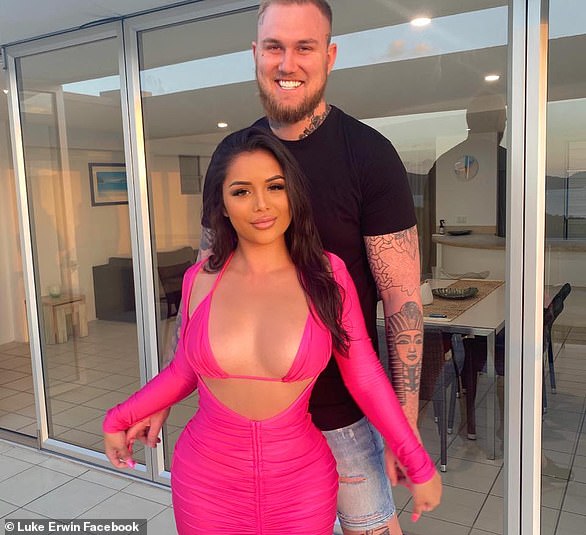 The generous stunts have divided the internet  (pictured, Erwin with his girlfriend Maddison) 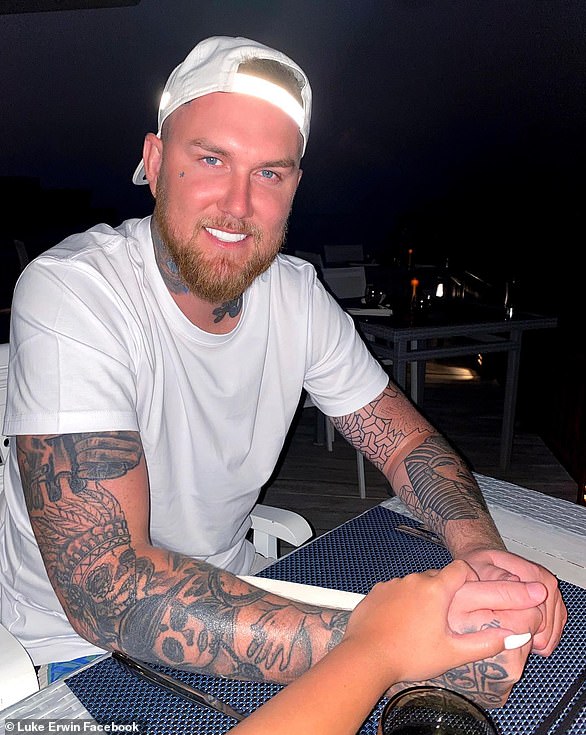 Luke Erwin (pictured) has deleted some videos and apologised for others, and admitted in one recent video that not all of his decisions ‘are going to be correct’

He had previously had to delete an earlier ‘tone deaf’ video after a furious backlash over him pretending to sneeze over another homeless man.

His most popular clip, viewed 38 million times, was of Erwin pretending to have his arm in a sling and asking strangers to tie his shoe.

One well-dressed man declined, but a nearby homeless man offered instead – without receiving any reward.

He has since changed direction and has been staging stunts to create situations where he can reward people for kindness, like dropping his wallet near people and giving them $50 if they return it.

Earlier this month he came under fire for apparently shaming one elderly migrant couple for not helping him open a bottle of water while his arm was in a sling.

He published a clip of them ignoring his pleas for help as they walked past with the caption: ‘Don’t be the person that doesn’t help’.

It sparked more criticism of the couple in the comments below.

However the couple were the parents of SBS journalist Amal Awad who slammed Erwin and revealed her parents were currently dealing with her father’s renal failure.

Her father was walking with a cane and her mother was carrying bags of groceries making it impossible for them to help, she said.

‘To me, these stunts are not random acts of kindness; at best they are performance, at worst they are monetised harassment,’ said Awad.

‘My parents, minding their own business, should have a right to their privacy.

‘Buskers need permission to sing in public spaces, but anyone with a mobile phone can ‘perform’ without permission and force a stranger into being part of their ‘content’ without consent.

‘True kindness is not made for public consumption. It does not need likes or commentary, and it should be genuine.’

In August, after Erwin was criticised for his stunts with the homeless, he told Daily Mail Australia: ‘To the people that are giving me shit, f*** them.

‘I don’t see them out doing anything. The people that are complaining, they’ve just never donated in their life.’ 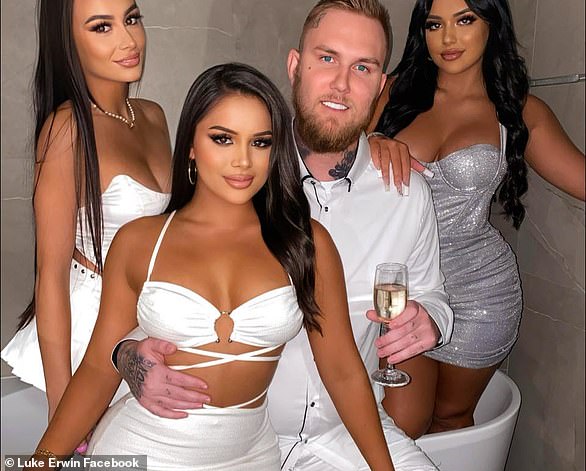 Erwin told Daily Mail Australia he hadn’t expected any backlash on the video and called on his critics to give back to their communities.

After the row with the SBS journalist’s family, he took to TikTok to defend himself in a clip entitled: ‘I can’t do anything right’.

He apologised to the family involved in the water bottle video, but stressed how much he had given away on camera to others, which followers estimated to be around $8000 in total.

‘I used to do all these terrible pranks which I wasn’t proud of,’ he admitted.

‘Now I’ve changed my content and I’m giving back to the homeless and helping people in need.

But he admitted: ‘All of my decisions aren’t always going to be correct.’

His videos receive a mixed reaction online with some hailing his generosity but others branding them exploitative and self-serving.

‘You know how kind and generous someone really is by the words they say and things they do without a camera being present,’ said one in the comments under the clip with the waitress.

But another added: ‘What a great man. Her face when he said 1 million was worth it – well done!’