Busted! Tesla’s camera catches man faking being hit and injured by car in bid for payout

A Louisiana man has landed behind bars after police say he tried to fake being struck and injured by a Tesla, only to be exposed as a fraud by the vehicle’s onboard cameras.

Arthur Bates Jr, 47, was arrested on Friday on a charge of falsifying a police report, punishable by up to six months in jail and a $500 fine.

According to the Slidell Police Department, at around 4pm on Friday, officers responded to a busy gas station in the 1400 block of Fremaux Avenue after getting a 911 call reporting that a man has been hurt in a hit-and-run accident.

The purported victim, identified as Bates, told police a Tesla backed into him, causing him to fall to the ground, and that the driver then fled the scene.

‘Bates was complaining of back, leg and neck injuries, resulting in an ambulance and fire truck to be dispatched to the location,’ police said in a statement.

Officers later tracked down the Tesla and spoke to the driver, who claimed that Bates ‘intentionally jumped behind his vehicle and staged the accident.’

What Bates apparently did not know at the time was that Tesla vehicles come equipped with in-car cameras and retain all the recorded footage.

Police in Louisiana say Arthur Bates Jr, 47 (pictured), attempted to fake a hit-and-run involving a Tesla, not knowing that the vehicle comes equipped with a camera that retains all footage 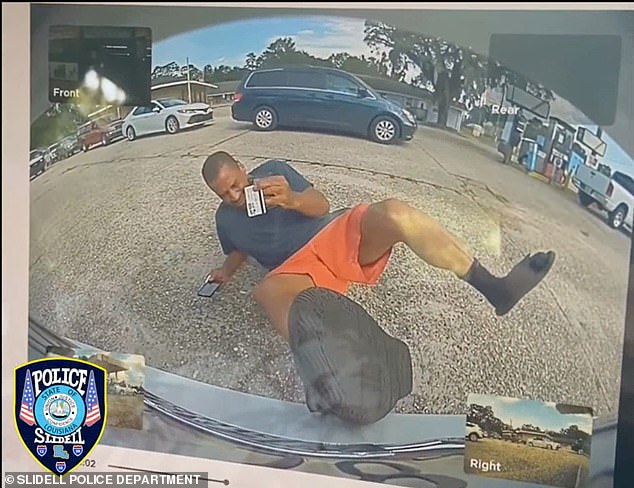 ‘When Slidell Police officers reviewed the Tesla’s video footage, it became apparent that Bates was lying and staged the entire event,’ police stated.

The police department on Sunday released video from the Tesla, which shows a man in red shorts and a black T-shirt, later identified as Bates, approaching the back of a Tesla, which reverses and quickly stops.

The suspected con artist gets closer to the rear bumper and then collapses to the ground with a pained expression on his face.

He remains lying on the pavement, with one of his feet resting on the Tesla’s bumper.

When the owner of the vehicle comes into view, he is clearly not impressed with Bates’ theatrics and unceremoniously knocks the man’s foot off of his bumper. 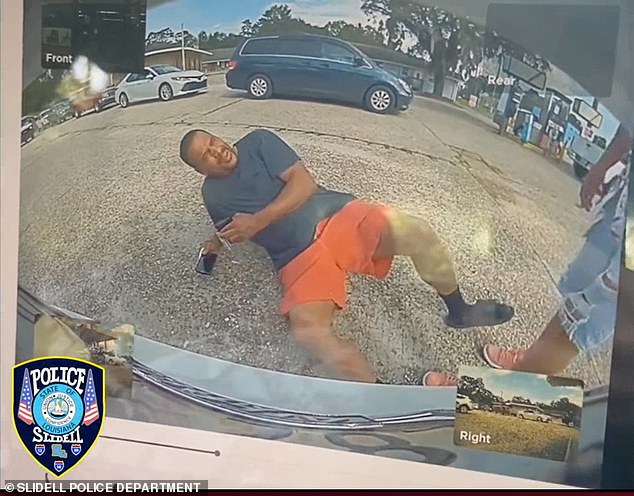 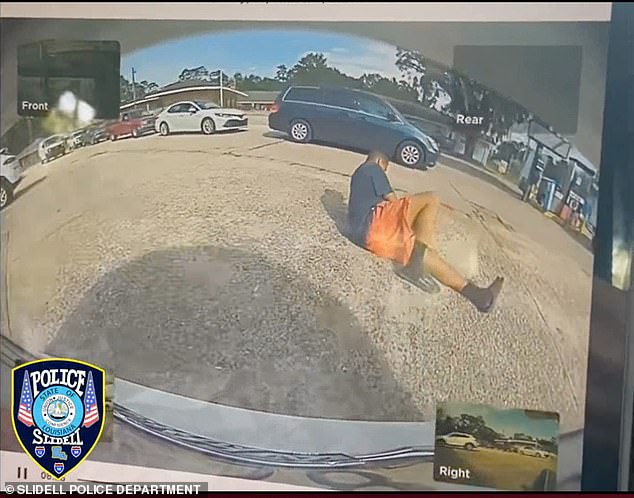 In the video, the Tesla drives away from the scene, leaving Bates on the ground. The man complained of leg, back and neck pain before admitting that it was all a lie, cops said

The Tesla owner then gets back in the car and drives off, leaving a visibly displeased Bates reclining in the middle of the gas station parking lot.

When questioned about the incident by the police, Bates allegedly admitted to making up the entire hit-and-run and was arrested on a count of false swearing with intent to cause an emergency response.

Bates has since been released from jail.