A Tesla owner in Texas has revealed how his five-year-old Model S suddenly erupted into flames last month, renewing old safety concerns about the electric sedans.

Usmaan Ahmad told the Washington Post he had just pulled off a thoroughfare in Frisco on November 23, when he heard a series of loud metallic bangs emanating from beneath his 2015 Tesla Model S 85D.

Ahmad, 41, said he pulled over to the side of the road to inspect the source of the din, when suddenly his car ignited into flames, with balls of fire ‘shooting out like a flamethrower’ from the front-passenger wheel.

Ahmad told Tesla he believes the car’s battery may have exploded but the specific cause of the fire is yet to be determined.

The frightening incident comes as one of many similar occurrences involving older Model S and X vehicles in recent years that experts believe are related to the car’s battery.

Concerns have routinely been raised about the safety of the electric vehicles as they age, and the National Highway Traffic Safety Administration (NHTSA) is currently investigating the incident involving Ahmad’s car, according to the Post.

Usmaan Ahmad said he pulled over after hearing a series of loud bangs emanating from beneath his Tesla Model S. Moments after stepping out of the car, it reportedly bust into flames ‘like a flamethrower’ 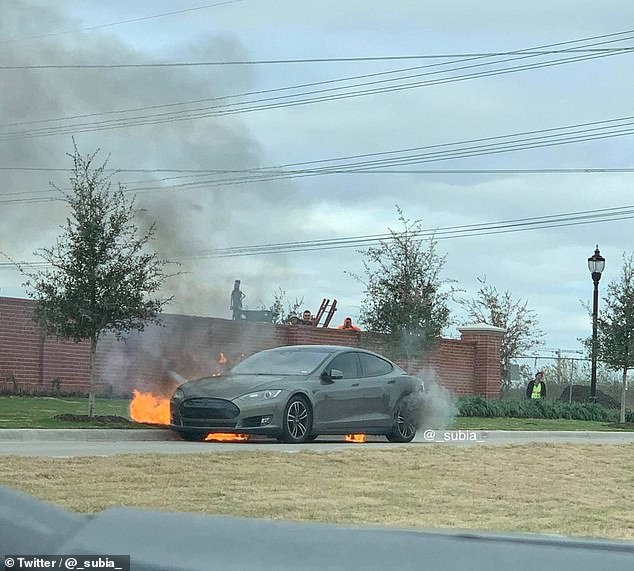 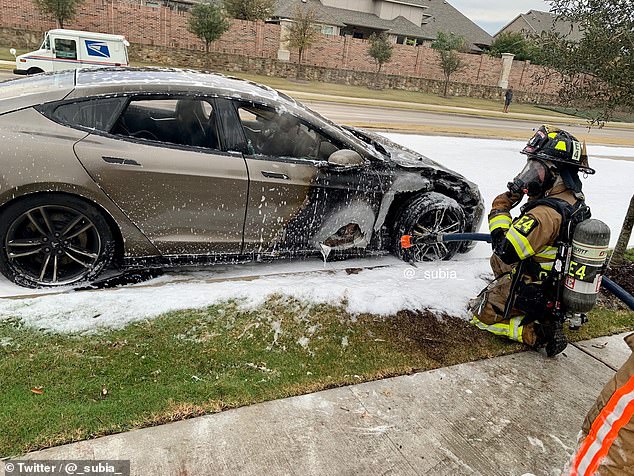 The NHTSA previously opened an investigation into alleged battery defects that could cause fires in older models of Tesla sedans and SUVs.

The probe was spurred by a lawsuit which claimed the Elon Musk-founded company had manipulated its battery technology in older model cars from 2012 through 2019 by lowering the battery’s range and extending charging times to address an unspecified defect.

An attorney filing a class-action lawsuit on behalf of Tesla owners brought the petition to the agency’s Office of Defects Investigation, citing an ‘alarming number of car fires’ that appeared to be spontaneous.

While the agency agreed to look into the matter last year, few details have since been disclosed about the status of the investigation.

For Ahmad, he said he had been driving his Model S for all of a few seconds before it combusted. The business development worker told the Post his battery was around 60 percent charged at the time, and he had been cruising lightly as he made his way home.

He immediately called 911 and firefighters were on the scene within minutes.

Witness Robert Watson also called the emergency services after he saw black smoke emanating from the vehicle as he was driving past.

‘It looked like the back of a jet engine with the afterburner on coming out of that front passenger wheel,’ Watson told the Post.

There was also another issue, according to Ahmad. As firefighters were working to extinguish the flames, one reportedly asked him how to get inside the cabin.

The doors of Model S Teslas are operated by retractable handles which pop out when they detect a nearby key fob. Ahmad tried to use the fob but it wasn’t working.

According to Ahmad, the firefighter told him he was lucky he got out the car when he did, otherwise he may have been trapped inside the burning vehicle. 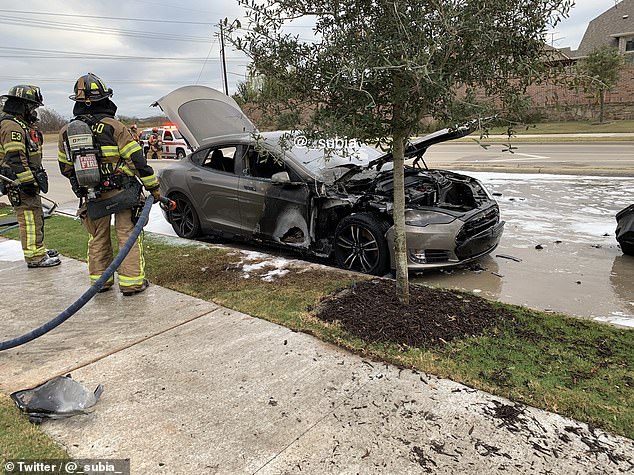 According to Ahmad, a firefighter told him he was lucky he got out the car when he did, otherwise he may have been trapped inside the burning vehicle 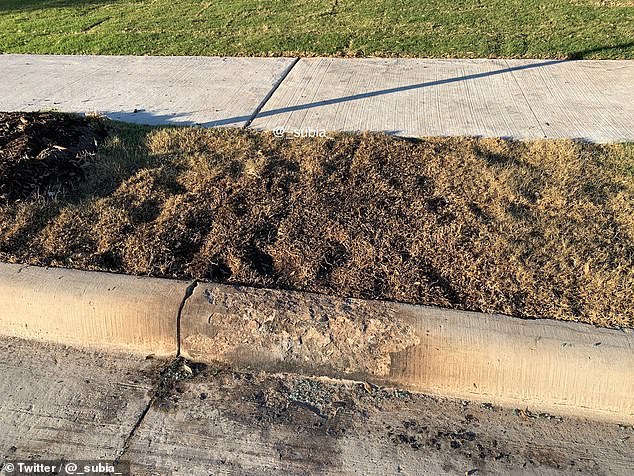 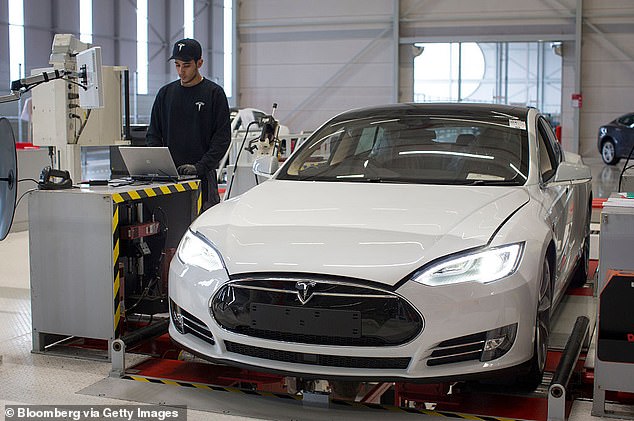 The NHTSA previously opened an investigation into alleged battery defects that could cause fires in older models of Tesla sedans and SUVs (pictured above s a 2015 Model S on the factory line in Tilburg, Netherlands)

Firefighters reportedly eventually had the blaze under control in around 10 minutes.

The car was completely destroyed by the fire and is currently being held in an insurance lot.

Ahmad said he is still waiting for word on what caused the fire. He however told the Post that Tesla have allegedly not been proactive in investigating the fire.

He wrote to a Tesla representative on November 25, two days after the blaze, writing that he assumed the ‘battery exploded’.

The representative said they were glad he was safe and said the company would look into the matter, but Tesla has reportedly since cited a series of insurance hurdles that have held up the probe.

Ahmad said he hopes the company can get to the route of the problem to ensure this doesn’t happen to anyone else, including his parents, who reportedly own a Tesla Model X SUV.

‘I don’t want anyone else to experience something this scary,’ he said to the Post.

Tesla has previously argued its cars are 10 times less likely to catch fire than gasoline vehicles, citing data from the National Fire Protection Association and US Federal Highway Administration.

However, when an electric car does catch fire, the duration and intensity of the blaze  – fueled by chemicals and the extreme heat built up in lithium ion batteries – can make them more challenging to put out.

In an emergency response guide published on its website, Tesla writes: ‘Battery fires can take up to 24 hours to extinguish. Consider allowing the battery to burn while protecting exposures.’

Tesla has also come under fire amid concerns its computerized cars have made emergency response more challenging, with features such as retracting door handles.

In South Florida in 2019, driver Omar Awan was killed after becoming trapped inside his 2016 Model S after it caught fire and the door’s electronic door handles failed to extend, following a crash. 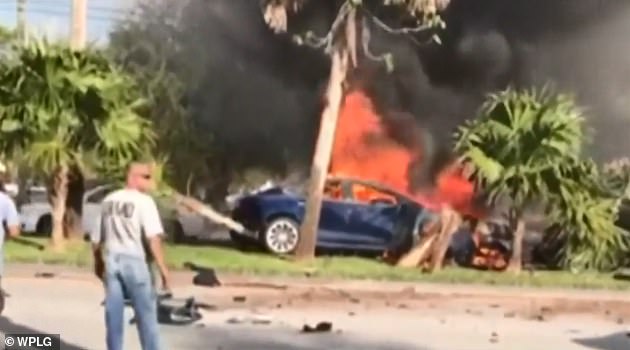 In South Florida in 2019, driver Omar Awan was killed after becoming trapped inside his 2016 Model S after it caught fire and the door’s electronic door handles failed to extend, following a crash 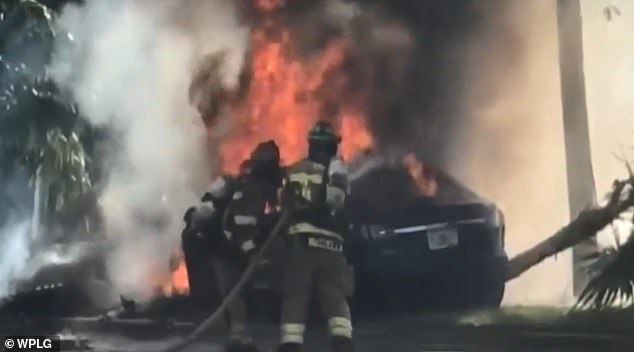 Awan was burned beyond recognition and could not be saved. His family filed a wrongful lawsuit against the company, claiming the design feature caused his death, rather than the crash itself. 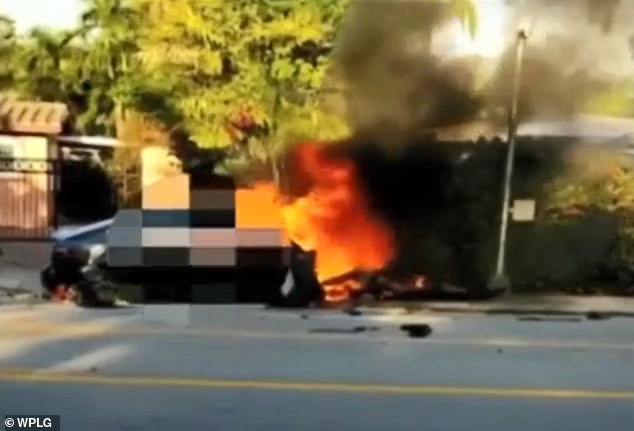 Two teens were also killed in a Tesla blaze in South Florida in 2018. Family of one of the victims claimed the car’s battery was defective and sued Tesla

His family filed a wrongful lawsuit against the company, claiming the design feature caused his death, rather than the crash itself.

His car was later taken to an impound lot where its battery reignited at least three times, the Florida Sun Sentinel reported at the time.

Similarly, a fatal crash in Fort Lauderdale in 2018 saw the family of one of two victims sue Tesla, claiming their son’s vehicle’s battery was defective.

Similar instances of Models S seemingly spontaneously bursting into flames have also been reported outside of the US, including in Shanghai, where a sedan was pictured ablaze inside a car park before exploding.

Similarly, in Los Angeles in 2018, a Model S burst into flames while in traffic, with fire shooting out of the wheel well.

At the time, Tesla called the incident an ‘extraordinarily unusual occurrence’.

Tesla has not yet returned a DailyMail.com request for comment on Ahmad’s claims.